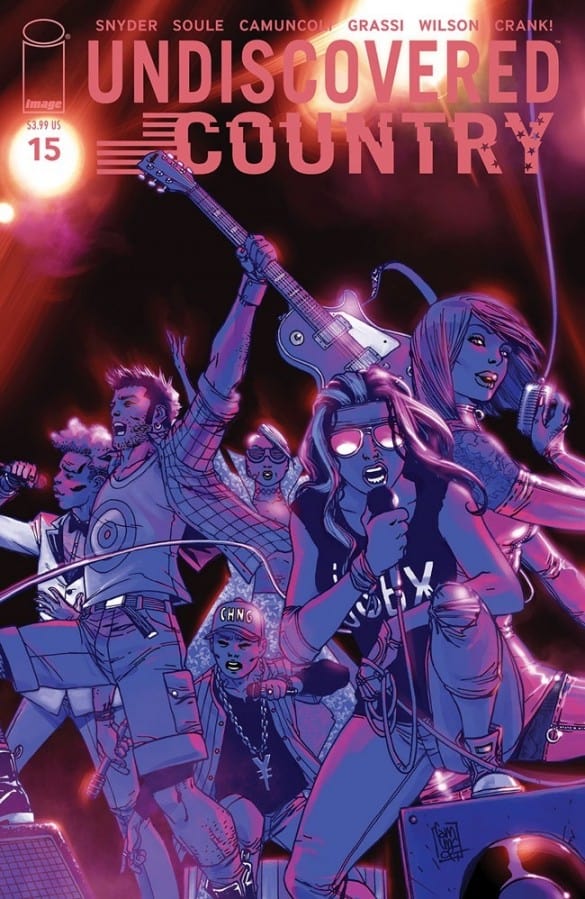 As our ragtag band of heroes continue to wander the spiral into the Heart of America, Zone Possibility presents the most unique challenge yet: to venture further, they must create an American masterpiece! But what does that even mean? What is America? Is art not subjective? Riddles abound...

Undiscovered Country continues to be a comic where literally anything is possible and anything can happen, and quite often does. It’s been a little hard to get a handle on from the get-go though, honestly: a victim of marketing, I’m not sure anyone got what they were expecting from this book when it was first announced, telling the tale of an America literally sealing itself off from the rest of the world. It appeared to be a comic hellbent on capturing the Trumpian zeitgeist, the xenophobia, the anti-globalism — but instead created a bizarro world where America is divided into allegorical subsectioned spirals and Uncle Sam is a person but not a person who guides a small band of explorers through the wilds of an untamed land where science, time, innovation, imagination, technology, and god knows what else run amok unchecked.

As both a reader and a reviewer, I’d be lying if I said Undiscovered Country has been an easy book to peg. It’s clearly smart, it’s clearly saying… something. What was assumed at first blush to be a stark mirror held up to Trump’s America, has mutated into something else entirely, rife with all manner of insanity. This third arc, centering on the characters’ exploration of Zone Possibility, is proving to be the series’ most compelling yet: anything and everything folkloric and distinctly American is at play, from superheroes to Johnny Appleseed to the myth of George Washington to the Crossroads Devil (the cover is misleading, depicting the obviously American rock ‘n’ roll, and while I assume that’s coming down the pike it hasn’t happened yet). What does it mean for an idea to be distinctly American? How do we define its properties? From folklore to American mythology, writing tag-team Scott Snyder and Charles Soule aim to answer that elusive question. So far their answer has been something of a composite by design, where everything from superheroes to Paul Bunyan is in play. Because, after all, there’s few things more American.

As our heroes are beset from all sides, the spotlight falls on cultural expert Ace Kenyatta, who has been tasked with writing an American Masterpiece so that they can graduate to the next zone. This calls upon Snyder and Soule to dive into the underbelly of history, both the commonly-known and that which is more often than not swept under the rug to look for patterns and recurring themes that resonate in ways that are distinctly American. No mean feat, and it requires an at least cursory examination of  American fixtures such as our music, our folklore, our literature, and our mythology.

It goes without saying, that’s a lot to consider. And it’s fair to say with this arc only being half done, they won’t be able to give these concepts the space and breadth they might deserve otherwise in, say, an academic dissertation. It’s an extension of the Undiscovered Country experiment, to try to define what makes America, America. In terms of plot execution and thematic/narrative exploration, this issue, like the preceding two from “Possibility,” are among the series’ strongest to date, really diving into what this comic is about (not to mention better codifying it than previous arcs). And while special attention is paid to Ace Kenyatta’s past this issue — we finally learn where his nickname “Ace” comes from — overall, characterization has seemed to be a secondary concern to the plot of Undiscovered Country from the start. That isn’t to say that the characters are poorly sketched out or under-developed, but with so much high-end fantasia happening every issue, it’s very easy for these relatively down-to-earth people to feel like they’re being lost in the mix a bit or playing second fiddle to Snyder and Soule’s big concepts. Ace has always been a bright spot, though, and easily my favorite character, so it’s nice to see him in such a prominent position this issue and for all of “Possibility.”

The art by Giuseppi Camuncoli, Leonardo Marcello Grassi, and Matt Wilson is distinctive yet subdued in a very smart way. It would be tempting for any artist to want to go completely gonzo with the ideas Snyder and Soule are putting forth each issue, but Camuncoli keeps even the wildest wild things on a very grounded level. Matt Wilson uses what appears to be a wash with his colors that subdues them without them becoming completely flat, giving the book an almost-animated quality that is quite distinctive.

Undiscovered Country is a book chock-full of big ideas that in the early running sometimes struggled to define what, exactly, the writers were trying to say. But with “Possibility,” though, Snyder and Soule seem to have hit their rhythm, and are really zeroing in on what they want this comic to be about, not just in theory but in practicality. In their defense, they chose an extraordinarily difficult topic to attempt to define — but I’m happy to report, as the series hits its midway point, they’ve clearly done their homework and the results are showing big time.

Undiscovered Country #15 finds this comic hitting its stride in a major way. Despite tackling extremely dense subject matter, Snyder, Soule, Camuncoli, and the rest of the creative team have clearly done their homework and are cranking it up a notch. If you found yourself initially baffled by this admittedly complex and highly allegorical comic, "Possibility" is a great arc to dive back in with!