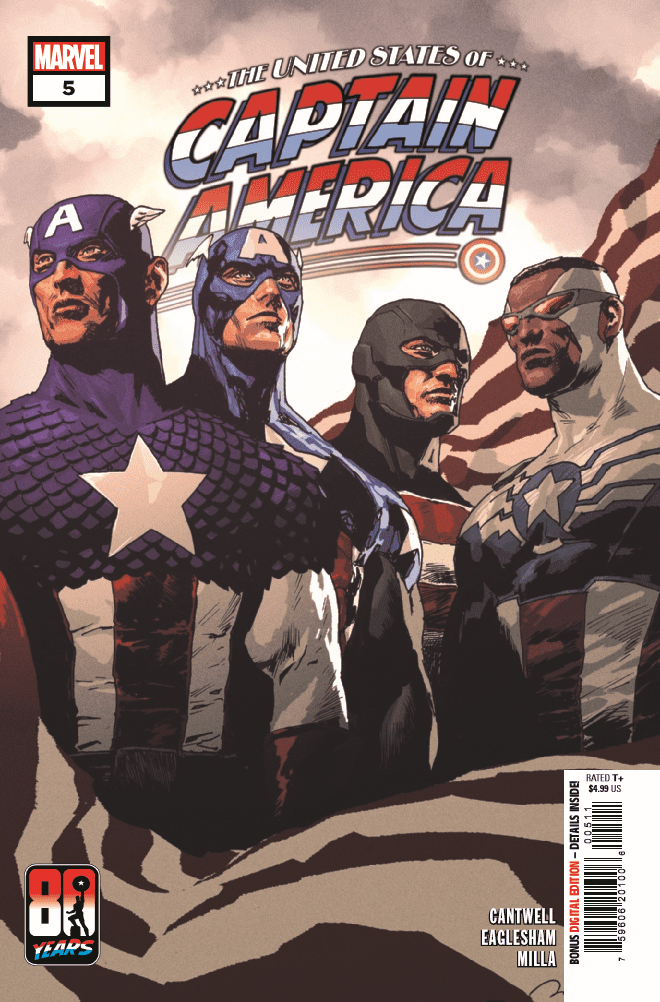 The Captains Network is united to stop the evil Nazi plot to brainwash an already brainwashed America! Can a dozen Caps save the day?

I have no doubt that this series was conceived with the best intentions. It had moments of brilliance. There were stories that put tears in my eyes (the Mashigo/Bustos back-up featuring Nichelle was a thing of beauty as were most of the backup stories). I’m higher on this series than I am not but I can’t turn my back with any sort of journalistic integrity from some glaring flaws.

There was simply not enough focus on the Captains Network, to start. By the start of the 4th issue, any additional Captains America were firmly relegated to comedic relief at worst, sidekick at best as the focus shifted towards the dynamics of having Steve, Sam and Bucky working with John Walker. The balance would have played far stronger if the new Captains were put into the spotlight rather than used as set pieces. The strength of the series was the new characters, and while some of them still suffered slightly because of the White Savior trope (particularly Joe Gomez, the Native Cap), they all still brought so much to the table that abandoning them mid-series for the most part felt like an epic bait and switch.

The central narrative being based in the current massive divisions in the United States, which in turn brings our iconography into question, was just tackled in the 30 issue Ta-Nehisi Coates run with much more subtlety and nuance, leaving this book to feel lacking in that regard. Yes, it is a major problem in the United States. There is no dispute there. Bringing back classic Cap baddies like Hate-Monger and Warrior Woman was a nice nod to “the more things change” but in the end, it stole focus from the new characters and they were the real selling point here. Again, great intentions but lacking execution.

The art was weirdly both even throughout yet uneven. Bucky shows up without his eye-black but it is added in later. Steve changes uniforms a number of time throughout, as does Sam. Little things here and there that are inconsistent and nitpicky, detracting from otherwise incredible art from an industry stalwart.

In the end, I don’t regret having bought and read this series at all. There were narrative and artistic highs peppered throughout. I only wish the focus had been sharper, the purpose honed. It felt as if too many good ideas were allowed and as a result, none of them had their time to shine.

And Captain Merrick is a ridiculous character. No. As an intel veteran, just no.  I can believe a man can fly far easier than I can believe an intel officer has access to that plane.

United States of Captain America was a series that featured many high moments but ultimately, despite the greatest of intentions in the name of diversity and inclusion, didn't deliver on it's lofty promises.