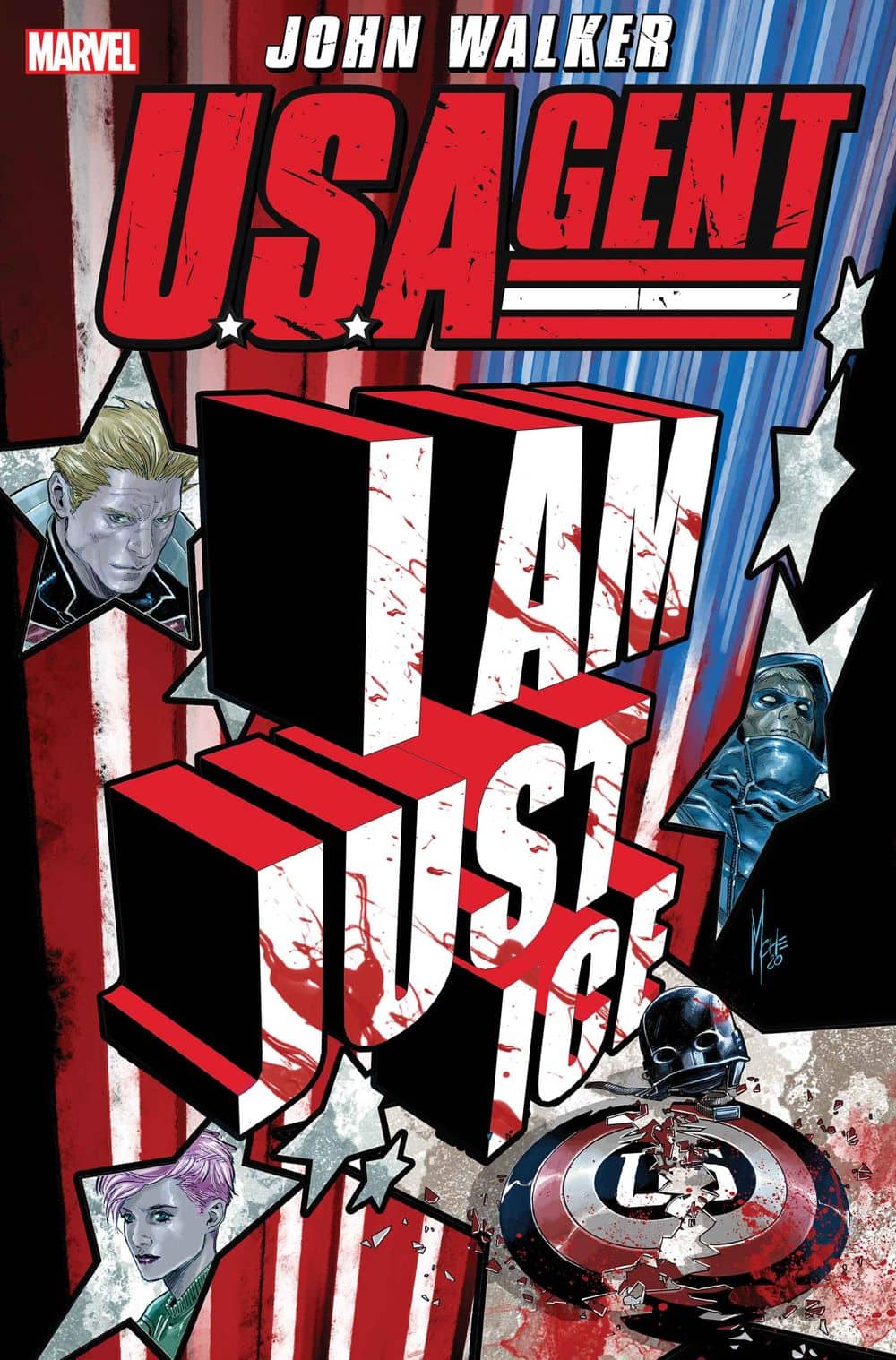 When unrest turns to violent outbursts in homeland America, who better to call than American diehard U.S. Agent? Who is the enemy? Who is stirring up strife? Who are these mysterious metahumans in the midst and how are they involved? Our boy John Walker has a lot of questions, a little time and scant on answers. Are the problems of modern America too tangled to be unwoven by one man or can he make the differences he always set out to make?

Let’s tackle the “easy” part first and talk about how slick this art is, Georges Jaunty is a seasoned pro having worked on a diverse range of titles from Buffy the Vampire Slayer to Bishop the Last X-Man to Superboy and back again. When you’re writing a story with this many layers but also some seriously dope action you want a heavyweight champ knocking out art duties and that’s exactly what we get from Jaunty, Matt Milla and Karl Story. The inks and color tone are equally on point, illuminating an air of nostalgia in the panels showing how we got here, new villain The Saint’s origin and Walker’s newly revealed turncoat sister as she explains how she got where she is.

Which brings us to the next part, the story itself: this is straight up the most densely yet easy-to-digest story John Walker has ever been a part of. I’m not sure they coordinated this miniseries with the Falcon and Winter Soldier series but it hits A LOT of the same notes just from slightly different angles. Without bogging down any of the story to exposition dump, every viewpoint here is presented fairly. Depending on who reads this series will adjust who you sympathize with more based on your own personal experiences and biases but at no point is a clear cut villain or hero for that matter truly made. It’s heavily arguable that by the end you can make the case for The Saint or for John Walker both no claimants to the U.S. Agent mantle as the series hero but like everything else here the presentation is not that simple.

The central theme here is essentially the complexity of people and the nature of that complexity causing clashes with diverse groups with diverse aims collide. In this story alone we have multiple people, all with individual agendas. U.S. Agent is just trying his best to stand up for the common man while also carrying the weight of his reputation and the expectations of anyone who carries the shield. Valerie Cooper is just trying to put out “wildfires” by any means possible without fanning the flames. The people of Ephraim, VA are just struggling to thrive in an environment where they’re being yanked to and fro by forces beyond their control. The Saint wishes to upend an imperfect system both socially and politically by tearing it down and rebuilding from the inside. Katie Walker just wants to blow the lid off the government failings and force it to rebuild from smoldering ashes and finally “big government” just wants to maintain order without emotionalism or compromise to unruliness steering the ship.

It doesn’t take a political science major to see how these various agendas clash like a kaiju battle (more on that later) in the current political socio-economic environment of America the last three years. The trick of it comes from sharing the hows and whys of how it got to be to this point without going heavy-handed one way or the other. Priest manages this masterfully with subtle yet poignant exchanges. For example when Lemar Hoskins aka Battlestar gets called in by Val Cooper to back up Walker when the situation seems clearly out of hand, we don’t see a man who’s all fire and brimstone ready to punch out rednecks and ask questions later. Instead what we see is Lemar Hoskins AS Lemar Hoskins, a husband, a father a real person not some faceless government tool who’s apprehensive at first to get involved for fear of making things worse despite some trust that Cooper in fact doesn’t want to make things worse. In just a couple pages we see a time old paradox of what it means to be a black man in America who, despite has super powers, is still trapped in a “damned if you do, damned if you don’t” situation. For myself as a veteran who’s not blind to the imperfections of our nation, this one really hits home. The desire to serve the American ideal that almost always isn’t the American reality for a large portion of Americans.

That same struggle is reflected several times by the more in depth moments of John Walker’s own struggles here. The man is dressed in the flag and should be able to use all the sway that being a Captain America figure should bring yet finds roadblocks to peaceful solutions every time he steps up to the plate. The paradox of his sister going through these same motions but her own trauma skewing where she lands on the issues rings through time like a cannon shot on why it’s historically been so difficult to find common ground amid the strife.

Perhaps the most conflicting yet interesting perspectives here are April Manning and a newly introduced enigma, Morrie Watanabe who more or less represents the first-generation American perspective in this story. Manning is the ever “rare” black conservative in America, I’m not talking some shucking and jiving political puppet but rather a man who sees the flaws on all sides yet through somewhat unintended and somewhat intended arrogance at times forgets his own shortcomings in the mix. In his own way he aims to tear down and reconstruct the flawed system around him but there’s still the nature of man and personal trauma skewing his own objectivity.

At the end of day what we have is a complex web of humanity being weaved yet sensationalized by the elements that make the Marvel universe the fictional world it is with roots in real world issues. The way it all clashes yet still creates a consistent story is a testament to the truth of the real world that flawed or not time still marches on, day-in and day-out we’re all just trying to do our best although sometimes that isn’t necessarily for the betterment of everyone. I’ve dropped quite a bit of spoilers here but to truly appreciate the gravitas of this tale you’ll need to read it for yourself.

Oh and remember that kaiju thing I mentioned? Well yeah there’s a giant flying Godzilla/Rodan type monster in this story as well which might seem out of left field until you realize two things:

1. The deep cut call back to SHIELD’s history with giant monsters and

2. How genius it is to force everyone involved here to acknowledge the problems are too big to handle in single player mode and that the ugliness from these clashing agendas is it’s own monster that we all must face.

In short, this story is gold you probably didn’t expect going in but you’ll be glad you did and the timing with Falcon and the Winter Soldier blowing up like it did could not have been better.

U.S. Agent is a rock solid political action tale with near flawless writing and stellar art, the reflection of the real world yet blend of escape we read comics like this for. Top notch stuff from start to finish.