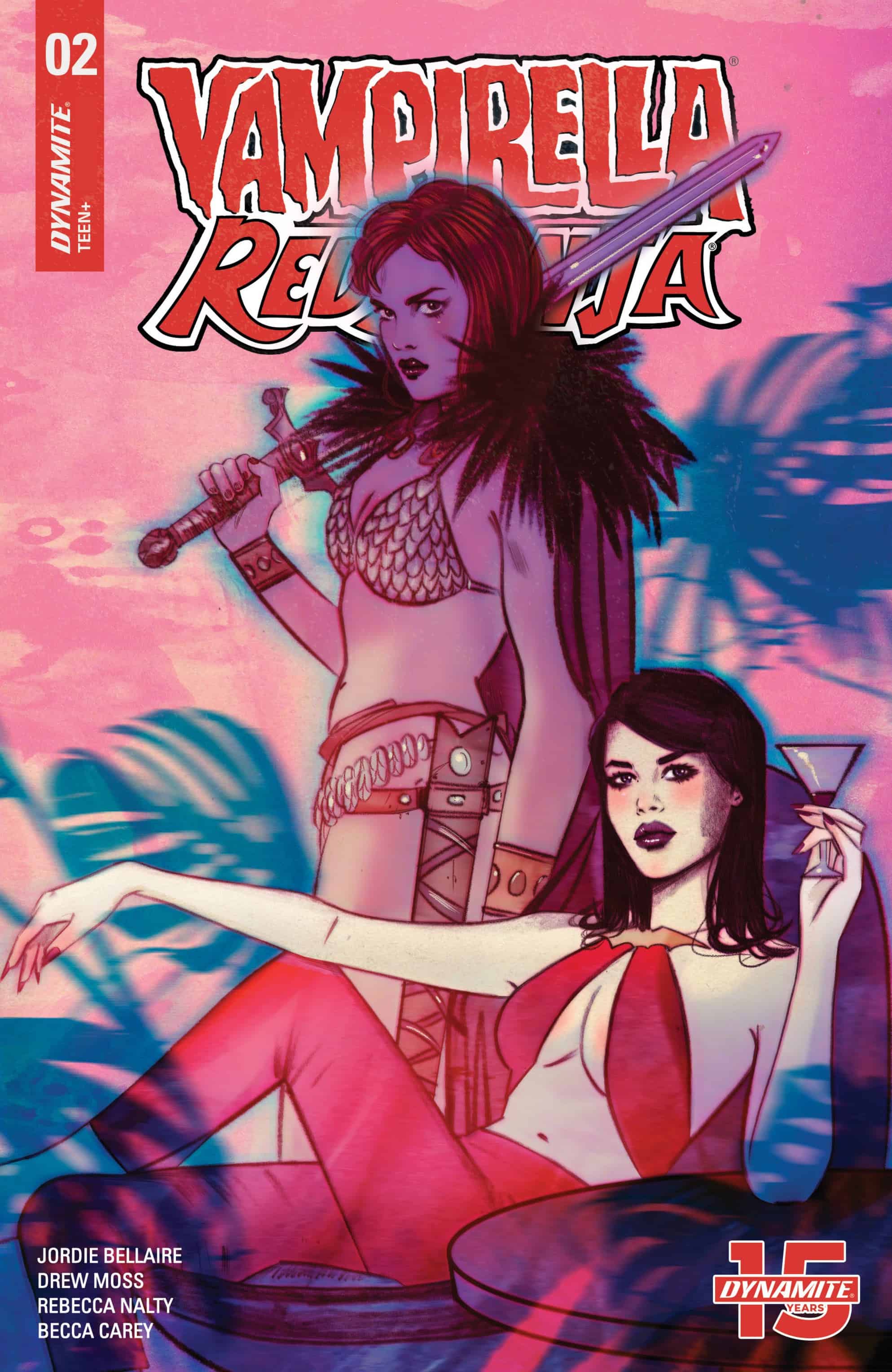 LET THE TEAM-UP BEGIN! In this issue: Vampirella takes a potion. Red Sonja gets hung upside-down by magic. A magical mystical mysterious gem begins to reveal its secrets. And many, many, SO many hamburgers are consumed.

Vampirella and Red Sonja prove to be quite the lethal combination in issue #2 of their team-up series, but is a friendship even possible amongst all the fighting and killing?

It’s easy to see that this creative team wants to explore the budding relationship between Vampirella and Red Sonja, two characters with a unique penchant for bloodshed. But just how do you do that when the two have no real reason to be caught together, much less on the same side of a conflict? Well, the answer to that question comes in the form of what is described as a Generation Stone which is essentially a curse that brought Sonja to this time period. This kicks off the heart of the story and acts as an interesting enough plot device to make this series a reality.

It’s difficult not to be aware of the purpose of bringing these two characters together for their own series. They are two of Dynamite’s most popular characters and isn’t that reason enough? With that, if this series has to exist, then it should be a thoughtful look into how these characters would behave and interact with one another. And that is exactly what this issue delivers.

Sure I want to see Vampirella and Red Sonja together in action taking out baddies, and there is some of that in Vampirella/Red Sonja #2, but its also full of genuine back and forth between the two that brings you into their rather prickly relationship. You don’t need to know everything about these characters to enjoy the story and I appreciate that. It’s a book concerned with the trials and tribulations at hand, and while it might not be the most action packed, its humorous and does a great job pulling readers into the story.

The artwork is impressive when the issue needs it most, relying on emotional character depictions during conversations to carry readers from panel to panel. The climactic ending definitely picks the pace up in an enjoyable way, letting the visuals shine as Red Sonja takes to killing while Vampi searches the area. What she finds sets up what is sure to be a thrilling third issue, but without much information on who Artur Sokolov is, it’s difficult to tell.

Overall, Vampirella/Red Sonja #2 is a solid book in a series that is very much for fans of the characters. New readers might not find as much to get them excited, but it is without a doubt an interesting look into how these vastly different individuals would act around each other. It offers everything I wanted as a fan and then a little extra for good measure, don’t be afraid to pick up the first couple issues of this series if you see them!

Vampirella/Red Sonja #2 succeeds in exploring a conflicted relationship between the two popular characters, but the story still needs time to develop before we see its true potential.