Originally debuting in 1994, Vengeance of Vampirella portrayed a more savage and feral look at the Daughter of Drakulon. Now, for the 50th Anniversary of Vampirella, original series writer Tom Sniegoski (joined by the incredible art of Michael Sta. Maria) is back and issue #1 features a host of incredible cover artists.

Humanity holds on, but barely, the playthings and slaves of a multitude of supernatural monstrosities that have made the earth their own.  Mistress Nyx continues to rule the planet, her Chaos Lords reigning over the various regions of the world, but she is getting bored - There's no one to challenge her! That is, until a small, but determined rebellion finds what could be their savior or seal their doom!

After 25 long years of both fans waiting patiently and Nyx’s unrelenting rule upon the Earth, Vampirella finally returns in Vengeance of Vampirella #1, a book that puts readers right on the edge of a blood-soaked conflict steeped in violent revenge. 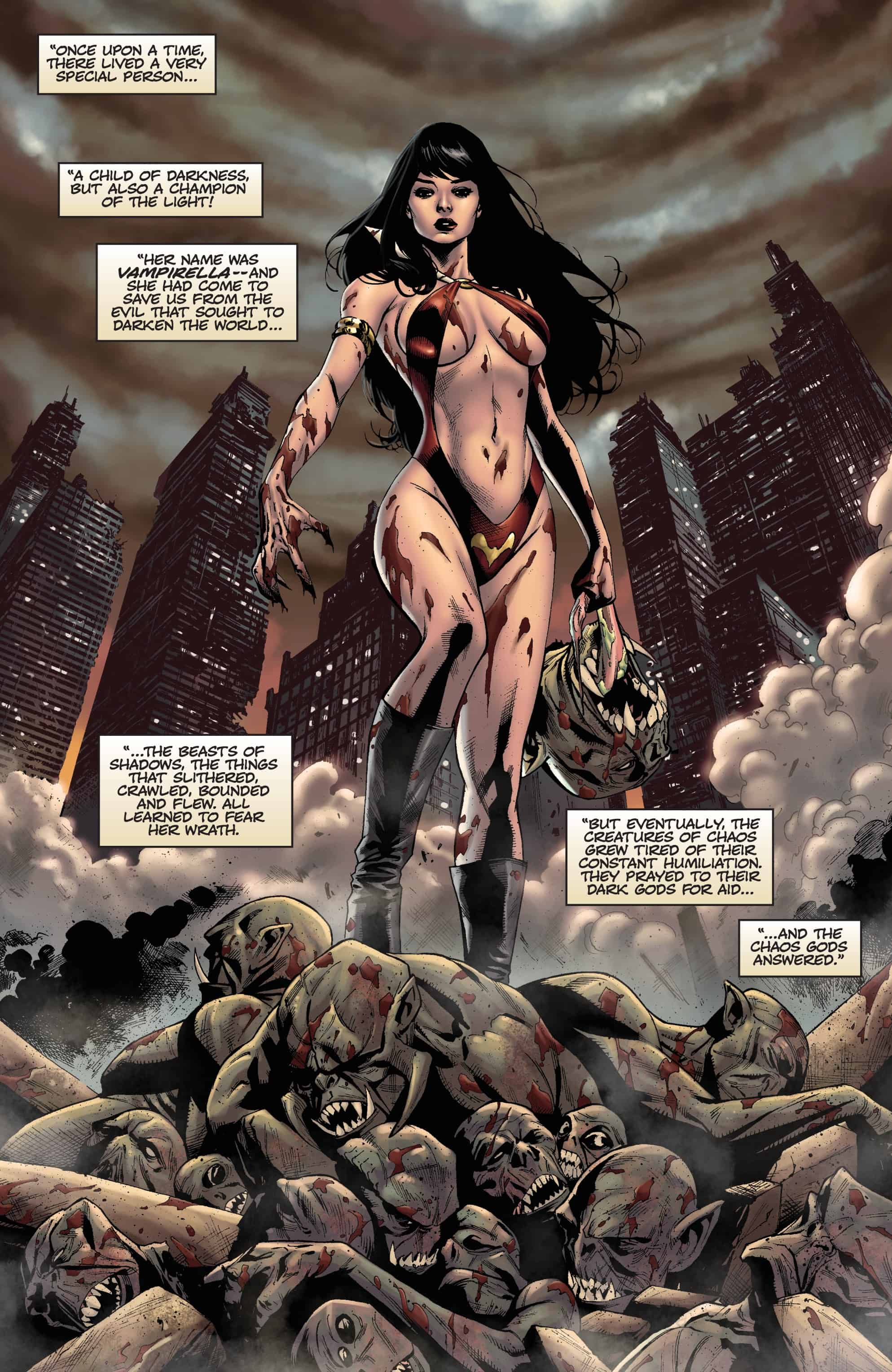 Picking up immediately where we left off so long ago, this first issue wastes no time in catching readers up to speed and diving right into the dire state of affairs on Earth after the fall of Vampirella. We begin with a heartfelt story told by lingering human survivors which serves as the perfect storytelling tool to bridge the gap between the previous Vengeance of Vampirella story and this new installment. Despite my own hesitation about how Dynamiate and the creative team could pull off a continuation after 25 years, this issue feels like no time at all has passed, throwing readers right back into the fray.

By striking a solid balance between being new reader friendly and delivering on the expectations from longtime fans, Vengeance of Vampirella #1 shows that this is a story that really is worth telling. It’s not a forced continuation for the sake of Vampi’s 50th anniversary. It’s a powerful and complex tale that puts Vampirella at the center of an epic clash. Spearheaded once again by the talented Thomas E. Sniegoski, the first issue in this return series delivers almost everything a fan could want.

The narrative introduced thus far serves as both a brief recap and a setup for the coming fight, framing the story in a way that makes sense for everyone who picks the book up. It doesn’t get lost in the requirements of the story though. There are quite a few moments of pure fan service as well as interesting new developments to keep you heavily engaged all throughout. 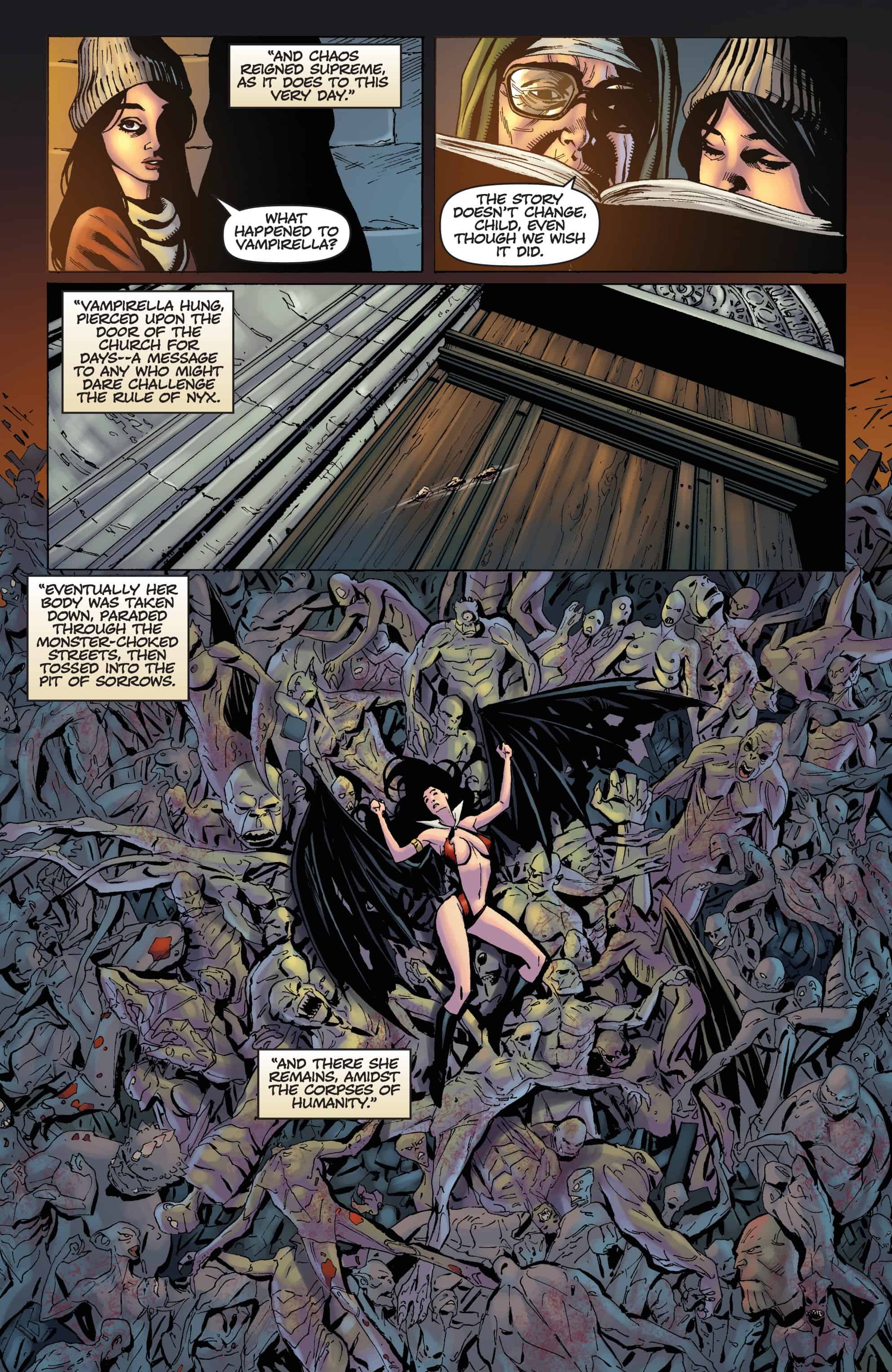 The artwork might not be the best on shelves today, but it hits all the right notes when the story demands it. The script provided countless opportunities for the visuals to truly shine and this creative team delivered. A naked Nyx drenched in blood, the deadly fight between Nyx and Vampi, and Vampi hung on the door of a Church all fit magnificently within one page, showing just what this series is truly capable of. As we move from one plot to the next, the consistency begins to waver slightly, but it finishes with a beautiful final few pages that will have you desperate for more.

The real question on everyone’s mind is undoubtedly, does Vengeance of Vampirella #1 prove to be worthwhile after a 25 year wait?

The answer to that is a resounding yes. It’s worth the wait.

And for new fans looking to jump in, this issue will more than likely have you excited to go dig through some back issues at your local comic store just to see the story so far for yourself. This first issue is a shining example of why Dynamite made such a great decision in bringing back the series.

Vengeance of Vampirella #1 is a blood-soaked return to form for the beloved character, featuring powerful new developments and dark visuals that will leave you desperately craving for more.