Venom #10: Your Own Worst Enemy 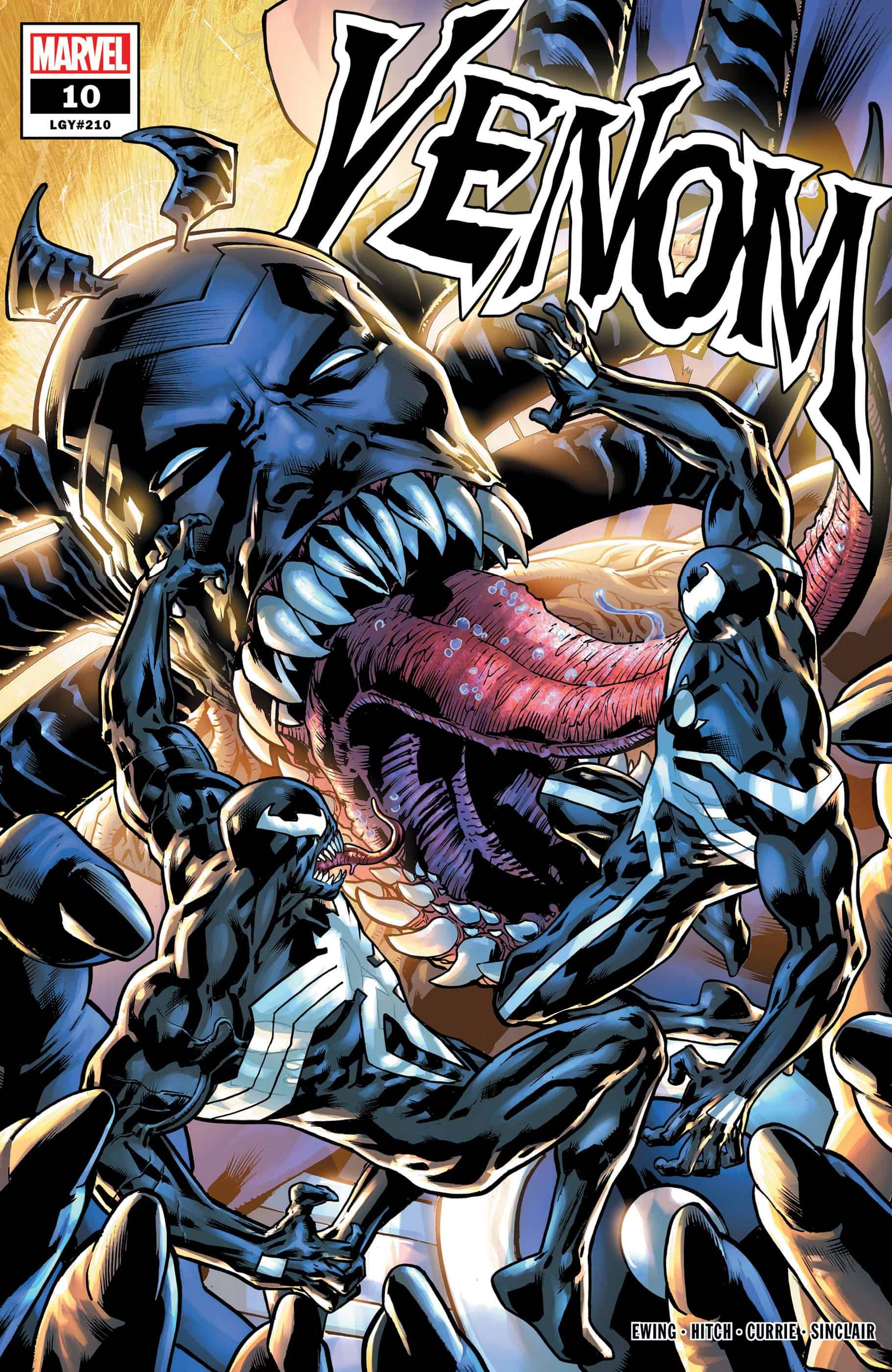 Trying to understand the full scope of his abilities, Eddie Brock, the King in Black, leader of the symbiote species and the center of its telepathic hive mind, inadvertently dislodged his consciousness from space-time. In the process, Eddie’s physical body was destroyed, leaving his son, Dylan, alone in the present day.

Without his father, Dylan has bonded to the Venom symbiote and the two of them are in more danger than ever before. A violent and bloodthirsty symbiote called Bedlam ambushed them and stabbed Dylan through the heart, critically injuring him.

Eddie, meanwhile, has been forced to watch helplessly from the Garden of Time, a symbiotic Eden inhabited by the Kings in Black who reigned after Eddie and have motives of their own…

Eddie Brock’s 10-issue odyssey through space-time has been marked by various pit stops and detours that have all been effective distractions from the darker machinations occurring undetected.  With the life of Eddie’s son Dylan hanging in the balance, light-hearted was never a term I thought to associate with this storyline, but Venom #10 brings on a new sense of dread that makes the first half of this arc feel like a fun romp in comparison.

Things were much simpler when the newly introduced antagonist Bedlam was just that, a one-off villain posing a superficial threat to create stakes and an end-goal for this widespread narrative. Few fans could have anticipated the twist reveal of this character’s origin, though more astute readers may have recognized the traces of psychological thriller that laid buried underneath Venom’s sci-fi adventure façade. With themes concerning the merciless march of time and the debate of free will versus fate woven into its introductory chapters, it makes perfect sense for this comic to now unfurl itself into a full exploration of existentialism.

As it turns out, Bedlam, along with the four other symbiotes Eddie encountered within the Garden of Time, are not future Kings in Black, but rather future iterations of himself. In his attempts to explore the telepathic symbiote hive mind, Eddie doomed himself to loop through time indefinitely with his grief, desperation, and furthering insanity forming him into different beings. Meridius is the leader of this group and the final form of Eddie, a cold and calculated manipulator who has resorted to hunting down his own son for reasons I will not pretend to understand. It is with this dramatic reveal that the narrative comes full circle, repeating so perfectly that a reread of issue #3 is highly recommended to appreciate the level of foreshadowing implemented by Ewing. Eddie’s mental stability is thrown out the window with this realization, and his internal monologue relaying this is written with prose akin to that of Poe or Lovecraft. It is a visceral descent into depression, a different type of angst not typical for the character, even in his more villainous eras.

Bryan Hitch’s art accompanies this tone well, drawing each future Eddie with a unique, subtle creepiness and the void of the symbiote hive mind as a Cronenbergesque collage of organic goop. If there is one criticism to be had, it would be that this plot twist greatly overshadows what should have otherwise been a devastating beginning. Venom #10 picks up from last month’s cliffhanger with Dylan Brock critically wounded by a stab through the heart, but leaves his fate ambiguous. This was done with the intention of building anticipation, but with so many bombshells dropped immediately after, I never found Dylan to be on my mind.

It has always been said that there are three categories of conflict in literature: man vs. man, man vs. nature, and man vs. self. Rather than choose one, Al Ewing has taken the bold and unorthodox approach of combining all the above. Eddie Brock is trapped in a futile battle against the natural force of time, which has broken and remolded him into his own worst adversaries. I cannot recall the last time a cliffhanger left me feeling equally as hopeless as the protagonist, clueless as to how he could possibly gain the upper hand. That rare feeling of the unknown that has me eagerly awaiting Venom #11 for a resolution as imaginative and outside-the-box as the rest of this arc has been.

Venom #10: Your Own Worst Enemy