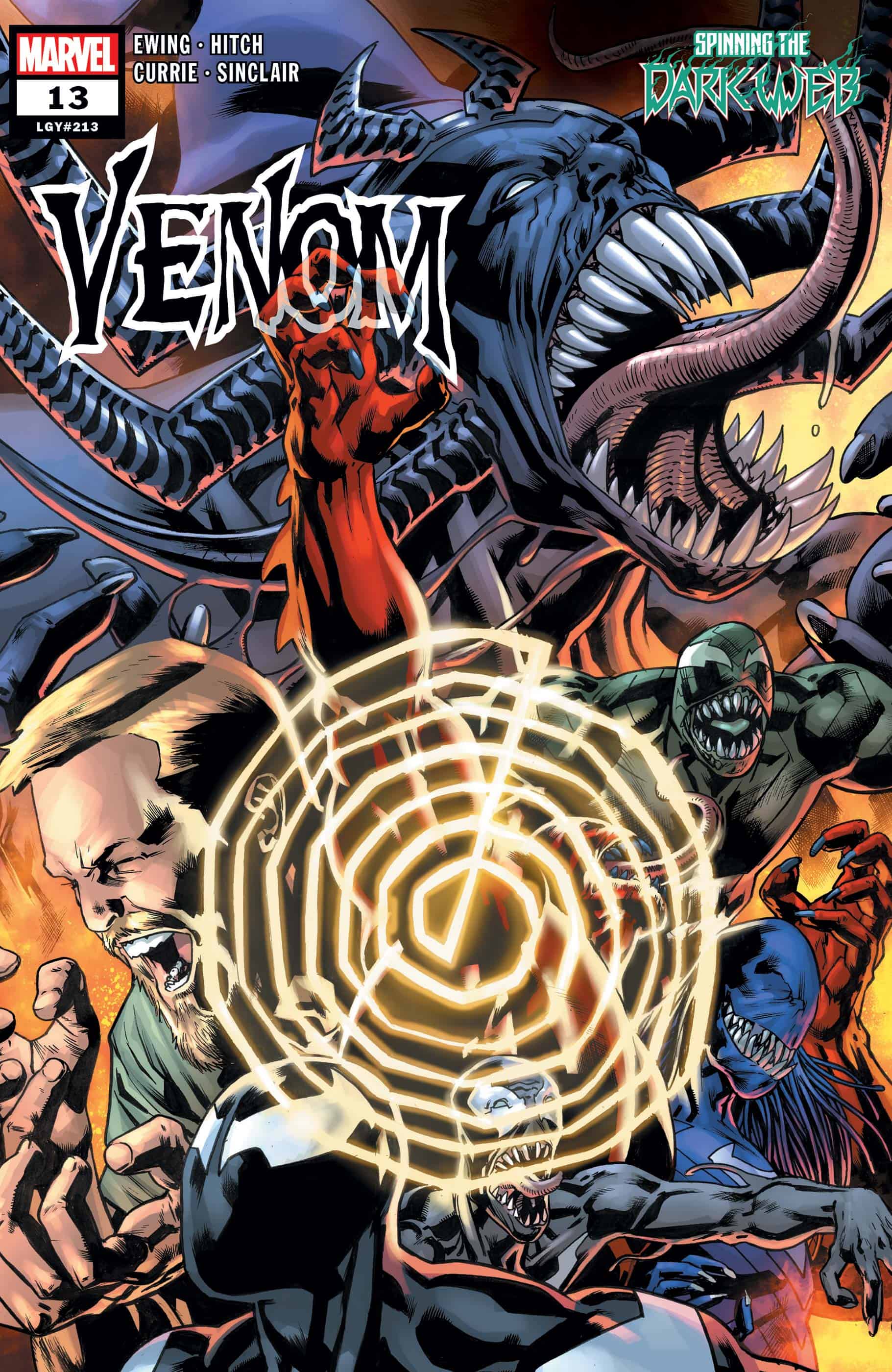 Dark Web Prelude! Forced to watch his son die from across the timestream, Eddie Brock finds himself surrounded by enemies. Alone, and with no one to trust, an unexpected ally lends a hand, and she’s setting the stage for the most epic crossover of the year!

Venom #13 comes out of the gate running with a rather impressive dialogue between Eddie Brock and Wilde, a future version of himself whittled down to a sarcastic, uncaring shell. It’s not an innovative idea by any means, as clones, shapeshifters, and multiversal duplicates have provided ample opportunities for writers to explore this “arguing with the mirror” scenario to varying degrees of effectiveness.

This one in particular, is noteworthy for its solid execution, as Al Ewing nails the subtle similarities in both characters’ voices to the point where you can truly believe that this a conversation between a person and their older, jaded self. Eddie’s mental anguish at his hopeless situation is well-conveyed through prose that is macabre and poetic without feeling out of character. Brock is a down-to-earth New Yorker after all, so it wouldn’t feel appropriate if his spiral into madness read like an Edgar Allen Poe passage.

The art team continues to impress, especially as this issue shifts away from science fiction and into the realm of fantasy. Bryan Hitch pencils a herd of goblins with an impressive range of shapes and sizes. Every goblin has enough of a photorealistic element to their facial feature to make close-ups panels, if not frightening, somewhat unnerving. The dimension of Limbo serves as the main setting for the issue, and Alex Sinclair colors it with a palette that feels appropriately stale and grim.

If there is one nitpick I have with Venom #13, it is that the latter half swerves into a direction that is unexpected and a bit concerning. Madelynn Pryor, the Goblin Queen, makes her grand entrance at the end of the issue, recruiting Venom to her cause for the upcoming Spider-Man/X-men crossover Dark Web. It is an inconvenient time to have to deal with a mandated event tie-in, just as Venom began to ramp its current arc up to a climax. Regardless of whether Venom’s involvement in the crossover is explored through this comic or another, the events will still have to be acknowledged via a short time jump and text box. I fear that this may disturb the pacing in what has so far been an incredibly steady series.

Venom #13 takes a little detour into the realm of Limbo, interweaving its own narrative with some obvious set-up for an upcoming crossover in an impressively smooth way.