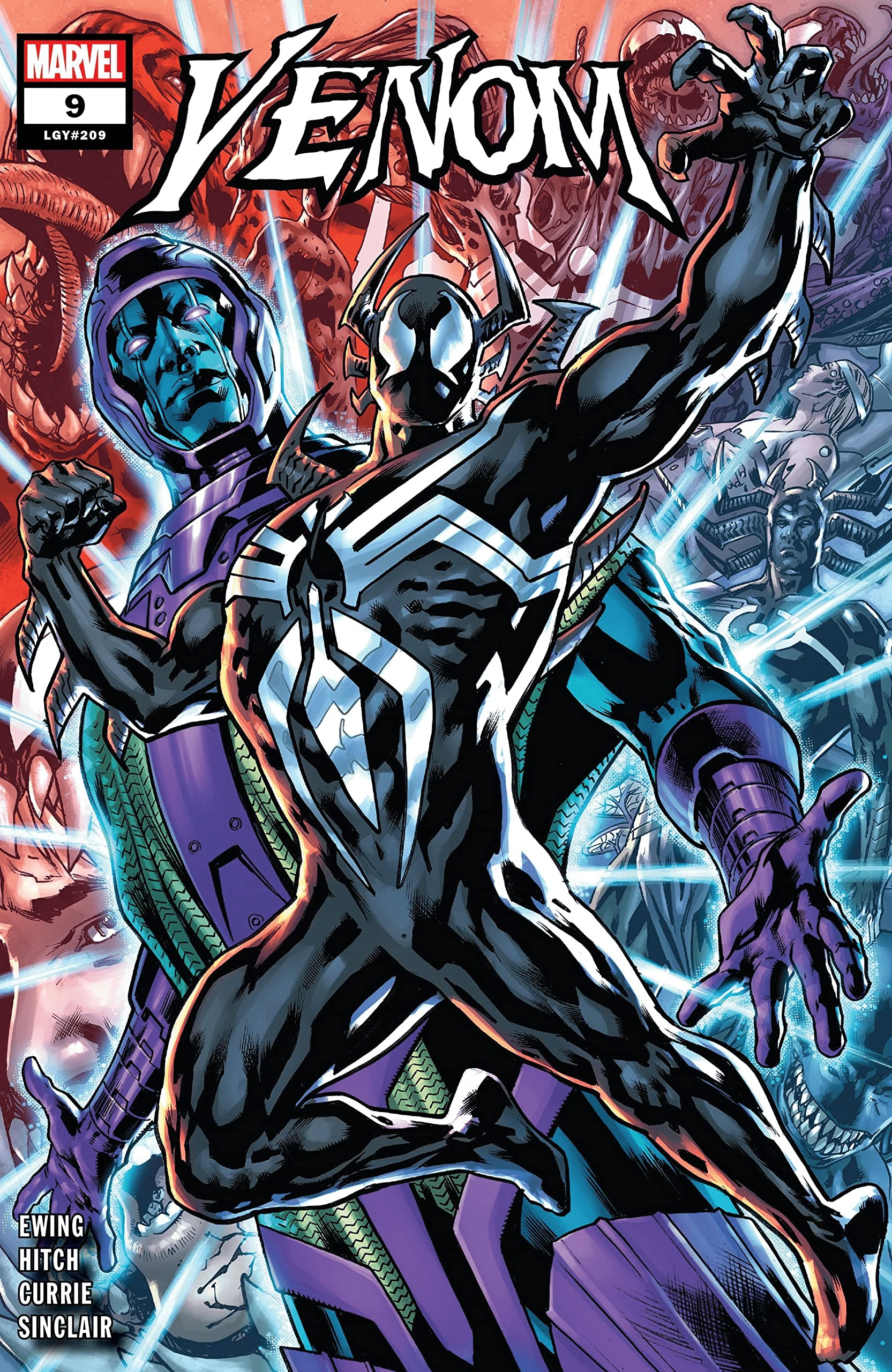 Eddie Brock is the King in Black, the leader of the symbiote species and the center of its telepathic hivemind. Trying to understand the full scope of his newfound abilities, Eddie inadvertently dislodged his consciousness from space-time and arrived at the Garden of Time, a symbiotic Eden inhabited by those kings in black who reigned after Eddie and have communed at the end of existence itself.

In the process, Eddie’s physical body was destroyed, marooning him in the garden and leaving his son, Dylan, alone in the present day. Without his father, Dylan is in more danger than ever before, relentlessly pursued by a violent and bloodthirsty symbiote called Bedlam!

This month’s issue of Venom diverts from the jovial, action-oriented tone of its predecessor, taking readers on a high-speed psychic journey that is sure to induce an ample amount of head-scratching. We start strong, plopped in the middle of an exchange between Eddie Brock and Kang the Conqueror as the latter does what he is best known for: a monologue about the complexities of the timestream. He speaks highly of Eddie’s title as the King in Black and the unlimited potential that he has inherited along with it. He speaks of the symbiote hive mind and its unique applications toward time traversal. He speaks of numerous universal rules and laws, which Eddie thankfully doesn’t comprehend any more than we do.

Brock has never been one for lectures, always defaulting to the old school philosophy of “punch first, ask questions later.” Kang learns this the hard way when he becomes the recipient of a rather nasty left hook. These heated interactions between the two characters deliver exposition in a comedic fashion and serve as a quick source of levity before the story takes a dramatic turn. Eddie is now aware of the fact that his son’s life is in danger and, armed with the knowledge given to him by Kang, races to prevent Dylan from meeting a horrible fate. It is currently unclear if Kang’s role within this arc is now complete, but a twist reveal assures fans that his assistance was motivated by more than just the desire to be a good Samaritan. 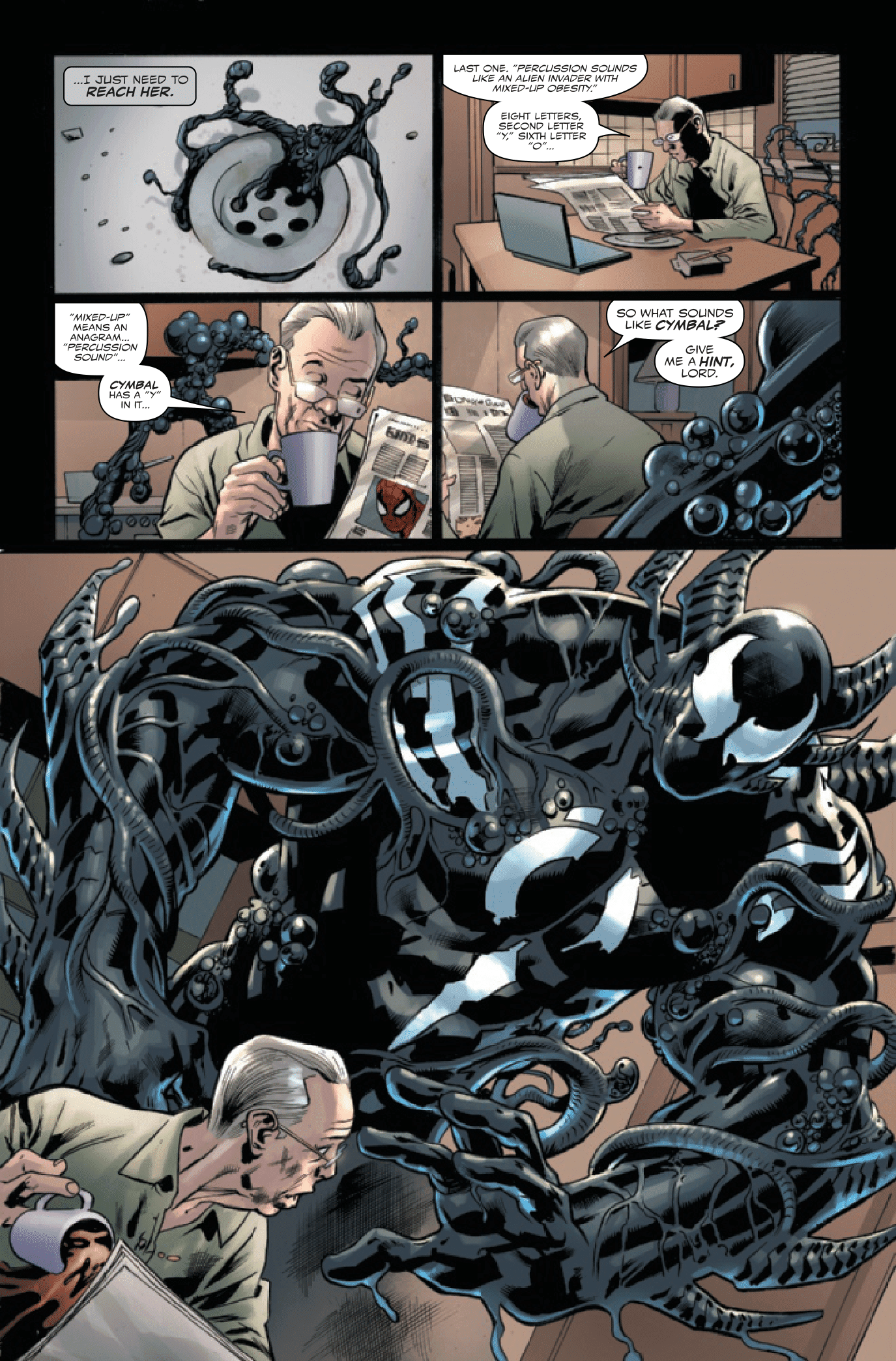 Writer Al Ewing embraces the complicated shenanigans that every time travel story inevitably produces, creating a nonsequential order of events that slowly pieces itself together throughout the issue. Eddie’s initial attempt to save Dylan from falling into the hands of his evil pursuers ironically causes his capture. As Kang warned, altering past and future events is a complex science, something Eddie would’ve had a firmer grasp on had he actually been paying attention. But the second time’s the charm, as Eddie rewinds once more to lead his son out of the trap he inadvertently created. It’s a puzzling dilemma that may leave your head spinning if you attempt to work out the logic behind it. Ewing’s direction never feels lacking in intention, though, and because of this, the confusion feels intriguing rather than irritating.

Ewing’s narrative works in tandem with art by Bryan Hitch, who excels at drawing symbiotes with the hulking, monstrous qualities that fans know and love. A particularly grand sequence occurs midway through the comic when Eddie takes possession of three captive symbiotes simultaneously. The massive flurry of teeth and tentacles that results is rightfully given a full page to itself.

Venom #9 ends on a worrying cliffhanger, with Eddie Brock falling into a trap that brings his journey full circle and renders his attempts to alter history futile. While this mistake seemingly spells doom for him and his son, I have faith that complicated time travel shenanigans will prove to be the Brocks’ salvation.

Al Ewing continues to expand the lore behind the symbiote species in impressive, unexpected ways. The stakes of Eddie Brock's journey have become far more personal, and the comic's main threat grows more intimidating as a result.