War for Earth 3 #1: You and I in a Little Toy Shop, Buy a Bag of Balloons With the Money We’ve Got 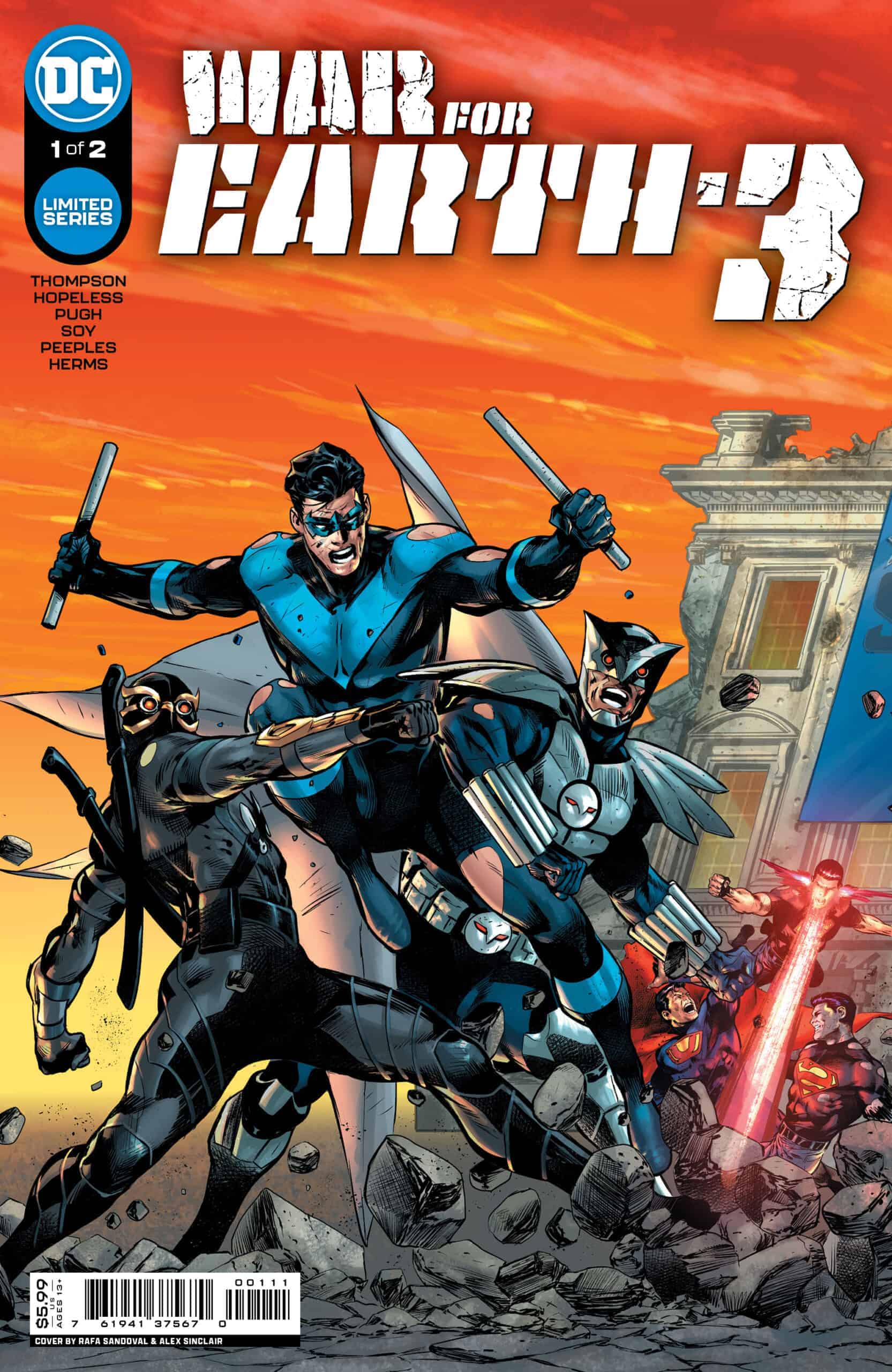 The Teen Titans, the Flash and the Suicide Squad all collide on Earth-3—home of the evil Crime Syndicate—on the hunt for former Task Force X mastermind Amanda Waller. As Waller tries to take over the alternate Earth and dethrone evil versions of Superman, Wonder Woman, Batman, and other heroes that rule it, her former partner—Rick Flag—arrives on E-3 bent on making Waller pay for her crimes, while the Titans and Flash hunt for a missing academy student they believe was kidnapped by Waller to form her mysterious Justice Squad.

It’s the beginning of DC’s big multiversal event, before the next one, and this one looks to be a bit of a doozy. If you’ve been following Robbie Thompson’s Suicide Squad, and if you haven’t, start. It’s a big, sci-fi popcorn flick, using characters and themes you wouldn’t expect to work in a Suicide Squad book, but somehow does, then you’ll see that Amanda Waller’s year long machinations, and the Squad’s journey through the multiverse, to wind up on Earth 3 and declare full on War to fulfill her plans. Will they succeed? You’ll have to find out.

Joining Thompson is Dennis Hopeless, who’s put out some stellar work for both DC & Marvel, as well as other publishers (pick up his X-O Manowar for Valiant), and they seem to be getting along just fine. Their voices for the Crime Syndicate seem pretty on point, especially if you’ve read the now classic Crime Syndicate mini last year from Andy Schmidt, Kieron McKeown, and Bryan Hitch. It’s a fun story that helps set up a lot of the plot points that the team seem to be setting up here. It’s not required reading, but it’s definitely worth picking up.

On art duties we have Steve Pugh, Dexter Soy, and Brett Peeples, who all have a very distinct style, which makes it a little distracting, but not too much. I especially liked how different the scenes that were happening on Earth-0 from those happening on Earth-3. Soy’s depiction of the Squad was energetic and angsty, and lots of fun. While Pugh, a comics legend in his own right, handles the majority of the issue, where we see Waller put all her plans into motion. The Syndicate are also on full display here, and he really captures the smugness that emanates off of these characters.

Robbie Thompson’s really pushed the theme of what the Suicide Squad could be, and he’s given us an Amanda Waller that shows why she’s the most important person the public needs to fear, and given us a Squad full of dueling personalities, and enough pathos to make us root for the bad guys. Unfortunately this issue doesn’t really tie in the other characters that are involved in this crossover, and the erratic bouncing from earth to earth, not really giving the Squad anytime to develop are the only real complaints I had for this issue. But they’re pretty mild complaints, and shouldn’t detract from your enjoyment of the issue at hand. Robbie’s provided us a real wild ride, but unfortunately it’s coming to an end this May, but if this issue is any indication of how he’s going to end it, prepare for some wild twists and turns along the way.

Mr. Toad had less exciting, and wild rides than what we’ve had over the last year with Thompson’s Suicide Squad, and this looks like it’s going to just get weirder. Waller’s tipping her hand, and she’s going to show us just why the acronym of HBIC was created.

War for Earth 3 #1: You and I in a Little Toy Shop, Buy a Bag of Balloons With the Money We've Got