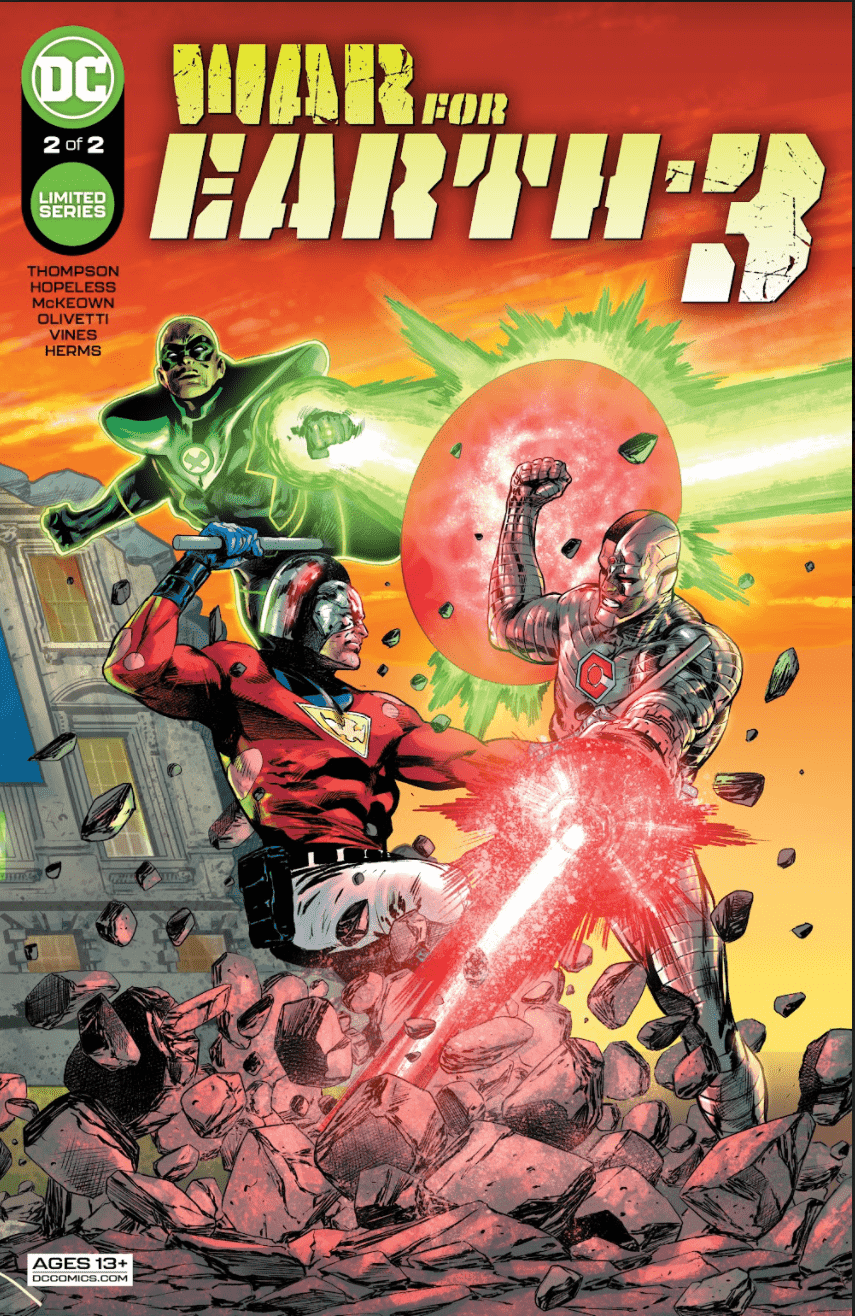 Amanda Waller has everything she needs for her takeover of Earth-3... unless the Titans and Rick Flag's rogue Suicide Squad have anything to say about it! It's the thrilling conclusion of "War for Earth-3!"

Without question, the conclusion to “War for Earth-3” will catch readers off-guard. It isn’t what anybody is expecting; neither a “good triumphs” or “evil unexpectedly triumphs” narrative, but in truth, “Oh, that actually makes a lot of sense.” Having said that, readers’ expectations might feel a bit subverted or let down by the conclusion, but at any rate, it’s a conclusion that sets up a new status quo for Earth-3 that nobody saw coming.

Here’s the problem, though: once Amanda Waller’s master plan is revealed, it becomes immediately obvious that the entire conflict could have been avoided if she had just not kept it a secret. Because for once, her plan is an inherently good-natured one, even if it hinges on her obtaining a measure of power. That means that the secretive aspect of it exists only as a plot-driver, not as any actual logical aspect of the narrative. In fact, it’s worth mentioning that had she been up front, she might have even been able to convince a superhero or two to help her out, or at least Rick Flag, whose heart is in the right place but ultimately winds up on the wrong side of the conflict due to assumptions he had about Waller (and in doing so, acts as a surrogate for the readers’ own assumptions).

As for the rest of the characters, such as the Titans (and their students) and the Flash, they feel a bit shoehorned in. Truthfully, the story could have played out pretty much the same – and even a cleaner, with less clutter – if “War for Earth-3” had just been a Suicide Squad story, which makes the most sense since it’s an outgrowth of everything Robby Thompson has been building toward since relaunching that title last year. The tie-ins to Flash and Teen Titans Academy were more about various Maguffins getting swiped; these story beats didn’t necessarily merit full crossover status from their particular titles and in fact were treated in their respective titles as minor distractions from the books’ actual ongoing subplots. So it goes.

As a work of execution, War for Earth-3 #2 falls into the trap of pitting protagonists against an evil Superman; in this case, Earth-3’s own Ultraman. Ultraman, of course, has been around for decades longer than the Injustice-flavored Evil Superman trope, but that unfortunately doesn’t change the fact that having him as an antagonist feels utterly played out at this point. What is interesting, though, are the new dynamics put into play as Waller’s scheme comes to fruition. What that looks like long-term is anyone’s guess (especially with Suicide Squad coming to an end in two issues), but there’s absolutely wonderful storytelling potential at play.

As for the art, there’s a small army at play, for whatever reason. The art is unspectacular, but gets the job done in a workmanlike fashion. I would however argue that some pages of the issue are trying a bit too hard to look like the great John McCrea, to minimal effect, and its overall cartooniness doesn’t suit the story. Given the general gravity and themes of Suicide Squad stories, art styles that are more cartoony in nature than not tend to clash with the intended vibe.

In the end, a lot was accomplished with “War for Earth-3,” but what could have been a three- or four-parter in the main Suicide Squad book was dragged down by unnecessary crossovers and characters forced in without need. It was still fun, but the overall storytelling could have been more economical thus more effective.

War for Earth-3 #2 features a rational conclusion to a story that could have been completely avoided if not for one person keeping unnecessary secrets. If it had remained a Suicide Squad story, it would have been much more effective.