War of the Realms #6 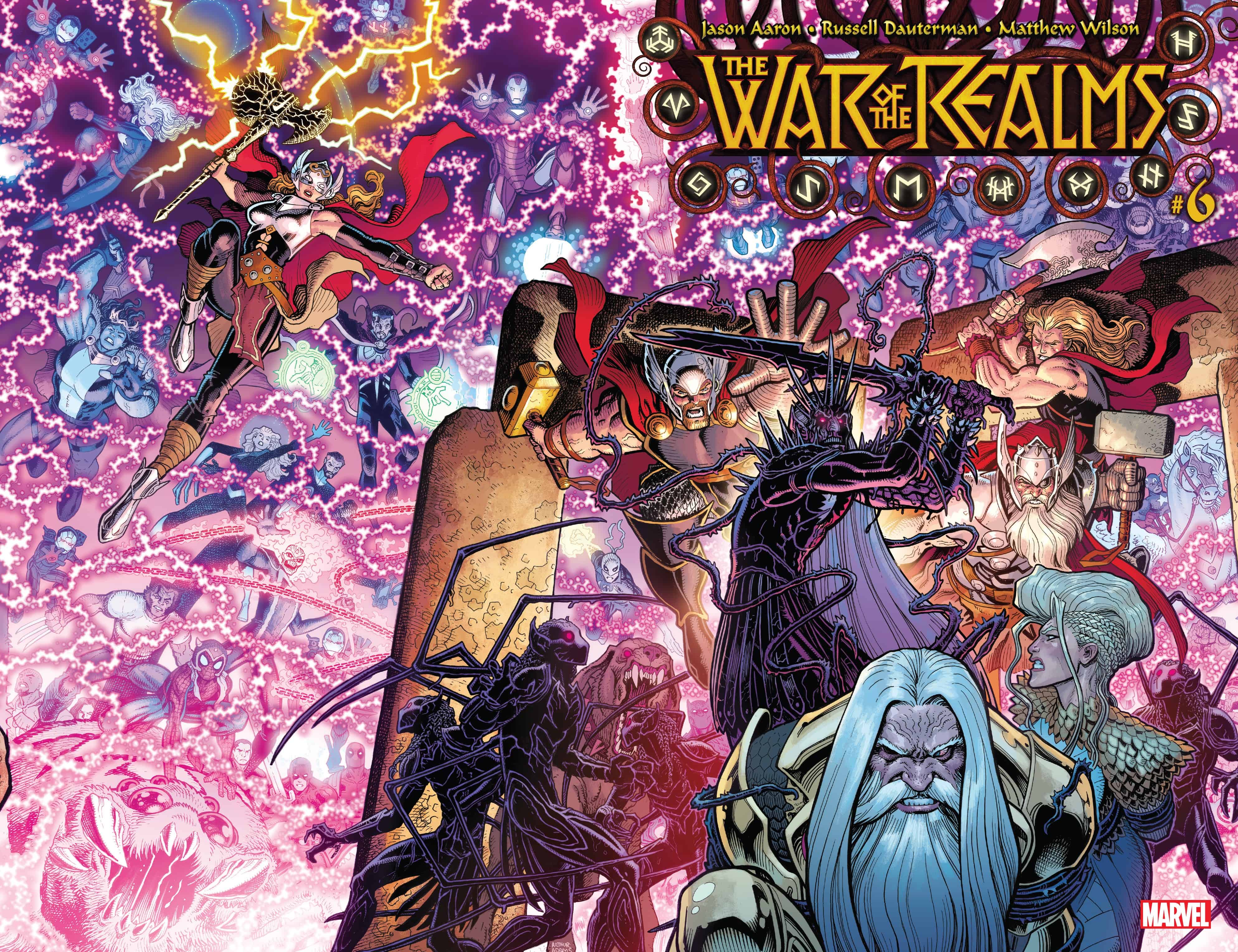 The War of the Realms ends with a dazzling array of Thors, a full circle gathering to help wrap up Aaron's Thor run, and more than a couple surprises! 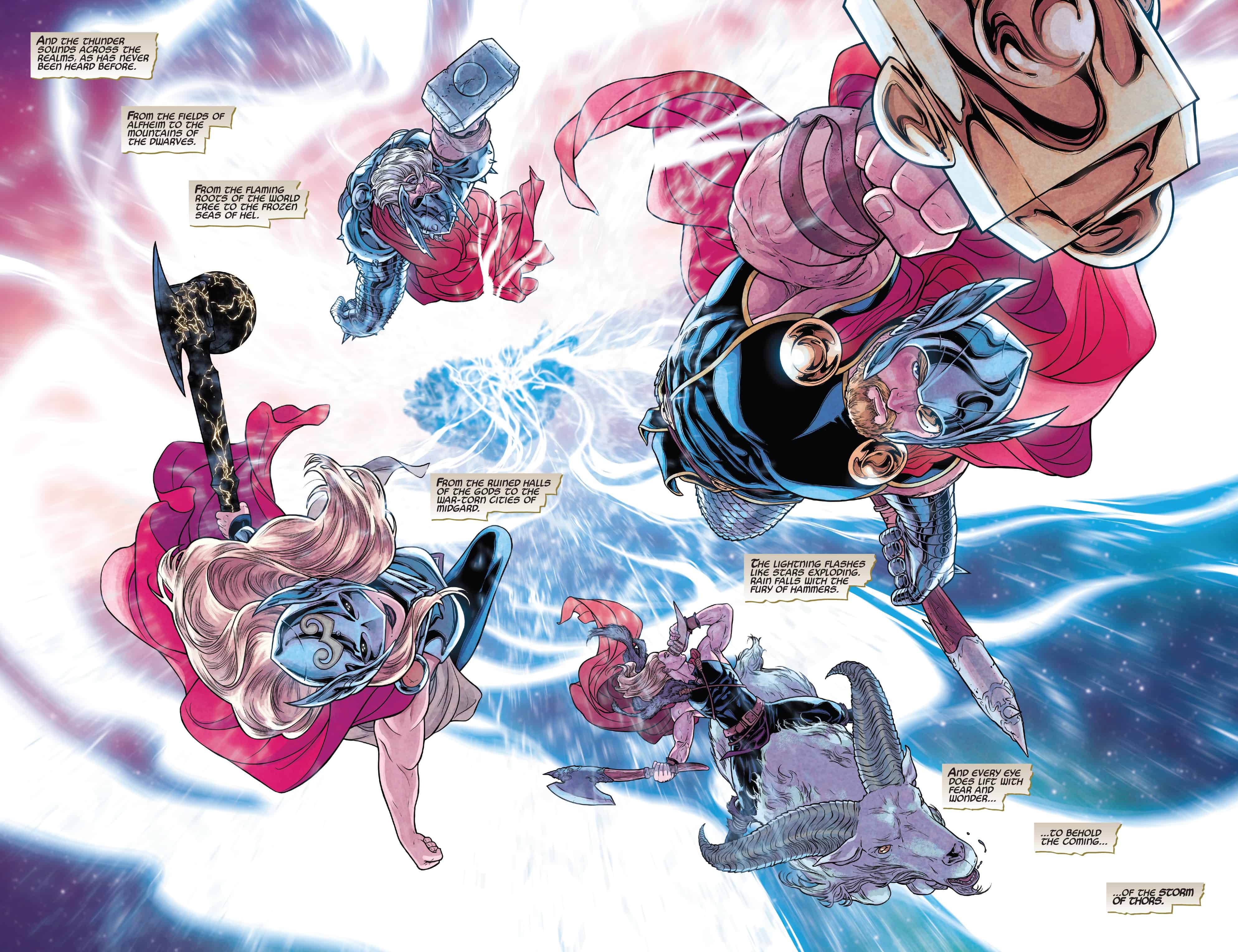 Awesome! A truly delightful finale to the event for Thor fans and especially fans of what Jason Aaron has done with the character these last 7 years. I feel this one off spiritual sequel to 2012’s God Butcher storyline serves to illustrate how much our hero has grown since then. From God Butcher to Thor and Loki the Tenth Realm to Unworthy Thor to War of the Realms, he is not the same Thor we saw enter a cosmic temple and find a bevy of felled Deities 7 years ago… That Thor was an arrogant, self assured braggart, although the Thor of today still isn’t perfect he is a changed man, Aaron has left a mark on the character that (hopefully) will last for years not unlike Daredevil following Frank Miller’s reimagining. 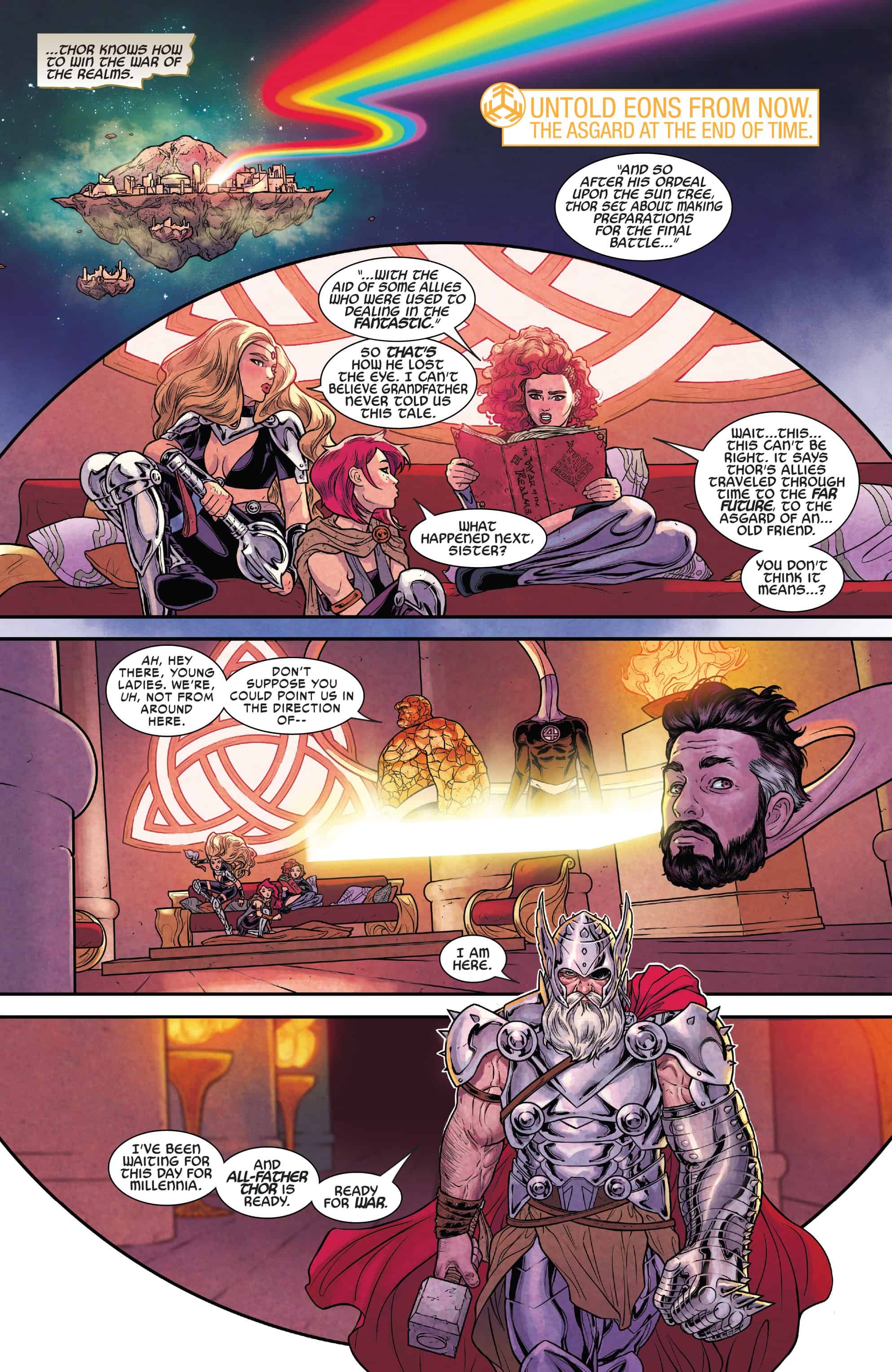 The use of Jane Foster as an additional Thor added another cyclical element although in my opinion she didn’t really do as much as she could have, but with this many Thors in one issue that’s excusable. I was just so excited to see her and wished she had done more. I was also slightly disappointed we didn’t get any of the other Thors around, if Jane Thor was able to eke through on a technicality I would have liked to see Throg, Volstagg (if Jane can pick up his hammer he can) and maybe even Thunderstrike Jr. or even Beta Ray Bill! Not to mention for Jane I might have liked an early peek at her Valkyrie identity rather than delving into an old story in a way that doesn’t necessarily make sense if you really think about it, although I guess it could be argued she effects her appearance when she changes and the hammer just facilitates it. It just kind of bothers me she isn’t War Jane Thor or something.

I’ve heard some say that as far as the war goes this issue was a bit underwhelming, but as I said last issue the war mostly wrapped up in WOTR #5 to leave this issue open to a final confrontation between Thor(s) and Malekith and it definitely felt fairly final. Although gruesome death in a Thor comic mostly means he’s Hela’s problem now, but maybe we’ll get Algrim the Strong back now? To my knowledge Malekith hasn’t been defeated in open combat like this before, usually slipping away at the last second not unlike a certain God of Mischief… 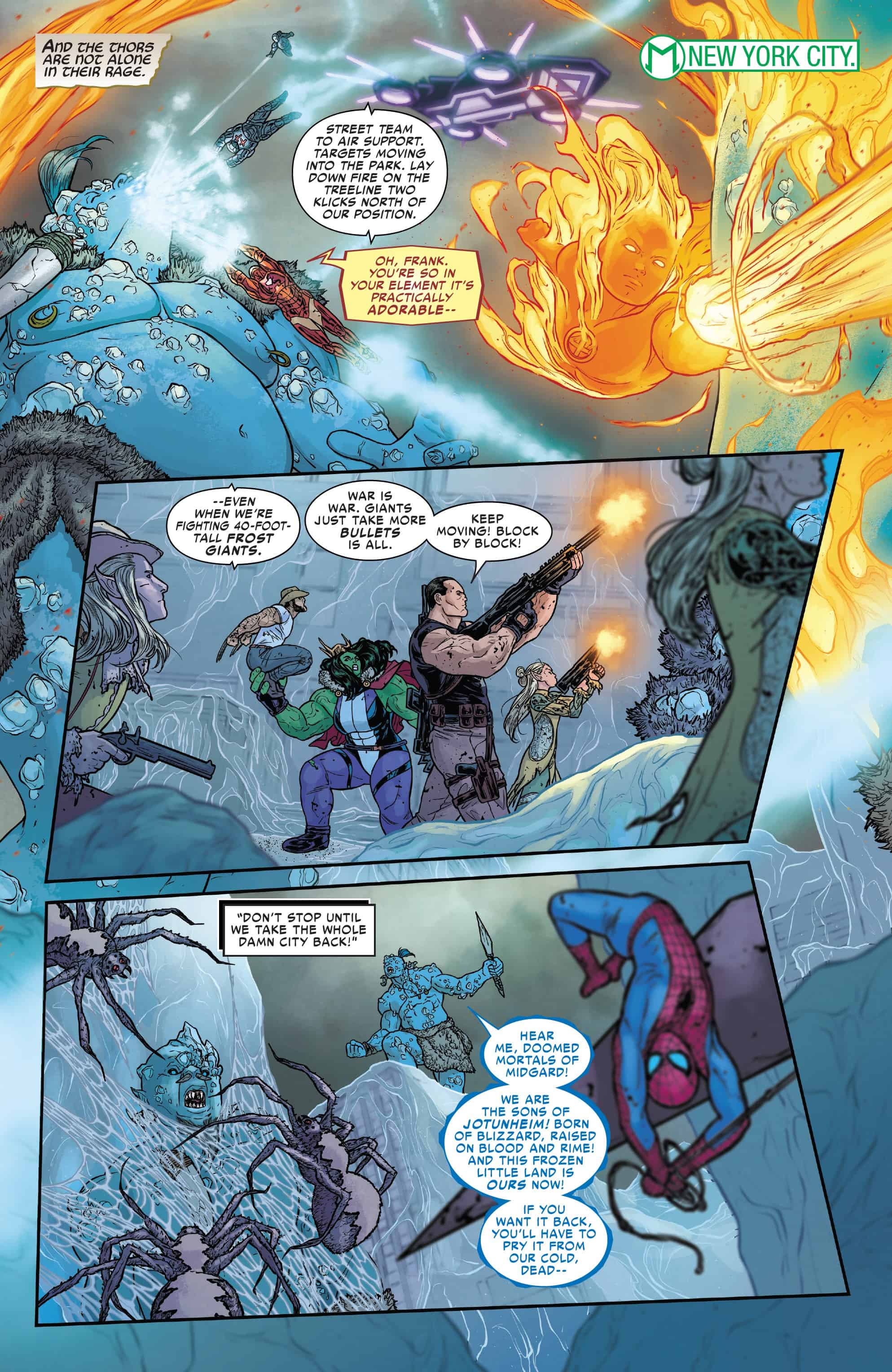 To the surprise of literally no one Loki isn’t dead. I called it in the first issue, it was basically confirmed in Thor, he has a series coming up. He was never dead. Meh.

I loved Thor progressing and possibly even surpassing the powers of Odin and summoning the God Storm, utilizing it to forge a new hammer. I did find it interesting that previously the God Storm was trapped in the hammer providing it’s power, but that didn’t seem to be the case with this one so maybe Thor is allied with this gargantuan cosmic storm rather than essentially enslaving it?

Interestingly just as much as this issue provided Thor with fanservice it was just as much in homage to Malekith’s early history (except the late 90s, nobody remembers that arc where Malekith has Melodi trick Ben Grimm into drinking the enchanted mead but me!) and some big moments in his backstory. The inclusion of the Cask of Ancient Winters and the Wild Hunt are both clear references to Malekiths first arc prefacing the Surtur Saga which ran throughout Walt Simonson’s run on Thor in the mid to late 80s.

I did find it somewhat anticlimactic the way Malekith’s Wild Hunt turned on him, but it did make some sense as The Wild Hunt is a horde of mystical hounds that can sense fear and at that moment Malekith seemed to feel fear for possibly the first time. That said it’s pretty exactly the end of The Lion King. 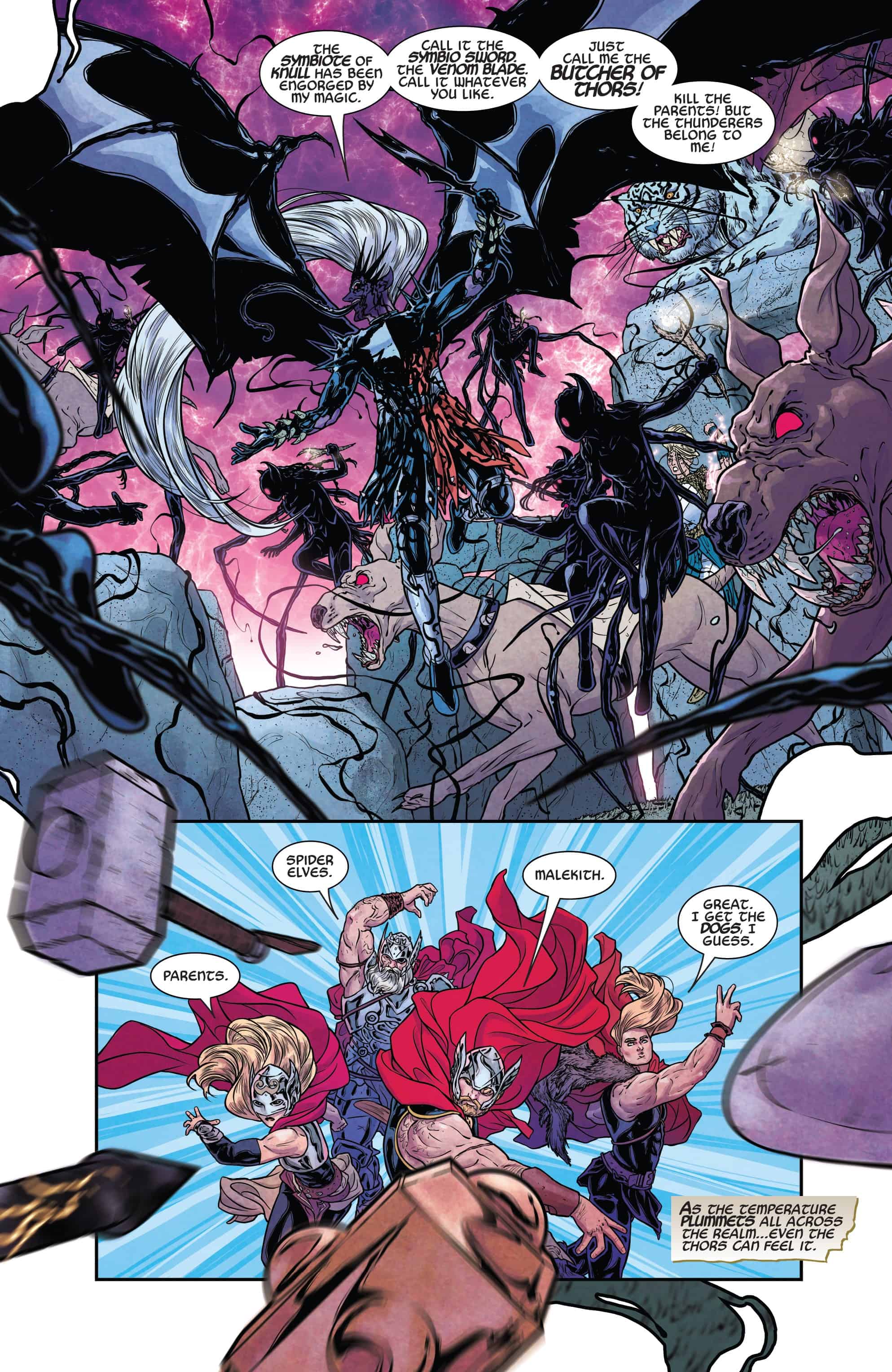 The art by Russell Dauterman and Matthew Wilson was excellent, as it has been this entire series. I’m very impressed by his stellar battle scenes especially as you start to notice the God Storm brewing overhead! I feel bad not saying more about the art, but I just can’t really give it much higher praise. I will say it’s impressive how detailed his art is that he has turned in on time every step of the way, so many recent events and series lose momentum towards the end for whatever reason due to delays (looking at you DKMetal and Fantastic Four!) and it’s a trivial seeming thing but damn it’s nice having a single dependable artist on a book like this. Such a relatively quick event is really nice. 3 months in and out minus some stragglers and an epilogue, not bad at all.

A great end to a solid event, I will likely be recommending this to Thor fans for years as an example of how a large Thor event can work.