WARHAMMER 40K: SISTERS OF BATTLE #1: Look to the Sky Just Before You Die 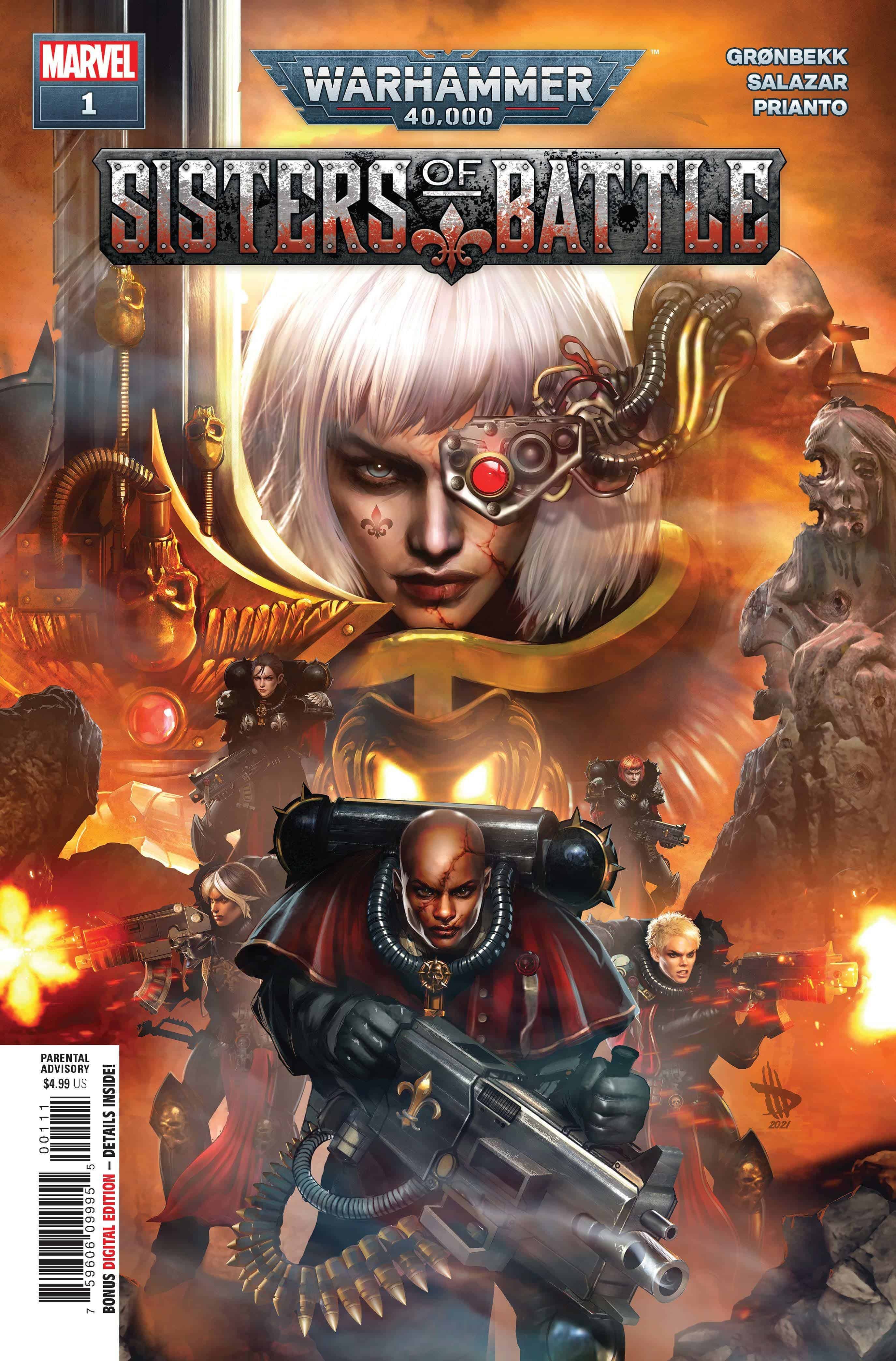 In the future, there is only war. Siscia is in duress and it’s up to the Sisters of Battle to stop the uprising and rescue an acolyte from peril. As the order comes to find out..it won’t be a quick mission.

“The Blood of the Heretics Covers the Ground”

Marvel has tapped into a science fiction vein that has been waiting to be discovered and explode with endless possibilities. That vein is none other than Games Workshop’s Warhammer 40K line. Their first offering was the well-received Warhammer 40K: Marneus Calgar. Their latest offering, The Sisters of Battle, penned by Torunn Gronbekk, continues the tradition of spectacular storytelling that has become synonymous with Warhammer’s massive roster of characters and their stories.

Torunn Gronbekk sets the tone as if you were watching a game of 40K unfold before you. For anyone that has played or watched a game, you know they can get pretty intense as the players are boiling over with their passion for the game. Torunn Gronbekk brings that same intense passion in Sisters of Battle. The narrator takes us through the twists and turns of Siscia’s dire plight and the need for the Sisterhood to figure out how to dispel the violence and figure out what is really going on. I really enjoyed Torunn’s approach to the story in how she produced a solid stepping stone regardless of the reader’s knowledge of Warhammer lore while satisfying the hunger of Warhammer veterans.

Edgar Salazar comes in with cannons blazing and does not miss the target. From panel to panel, we dine on a visual smorgasbord of great detail that captures the character’s pain and anger while bringing the same passion to the littlest detail in the armor and weaponry. Warhammer 40K is a dark and grim world, and Salazar’s art really successfully tells the world’s dark and grim story. Arif Prianto comes in like a man possessed (as he usually does); his coloring is topnotch and really makes the panels come to life. Prianto’s masterful approach to the Warhammer world perfectly captures what is going on in the story. From the blood-red sky, the battle-ravaged armor, Prianto’s coloring wraps a beautiful war-ravaged bow on an excellent Warhammer story.

Warhammer, whether Fantasy or 40K, can be overwhelming in choosing where to start. Marvel can milk the Warhammer for years and keep readers happy. What has been refreshing in Marvel’s approach is that they have assembled teams that work extremely well with each other, producing two outstanding stories that ease new readers in. When I heard of the Sisters of Battle series coming out, I was so stoked because I love Warhammer, and I loved this book. Even if you are not familiar with the Sisters of Battle, I urge you to go and check this book out. It’s great sci-fi, and every page is filled with phenomenal writing and art.

WARHAMMER 40K: SISTERS OF BATTLE #1: Look to the Sky Just Before You Die