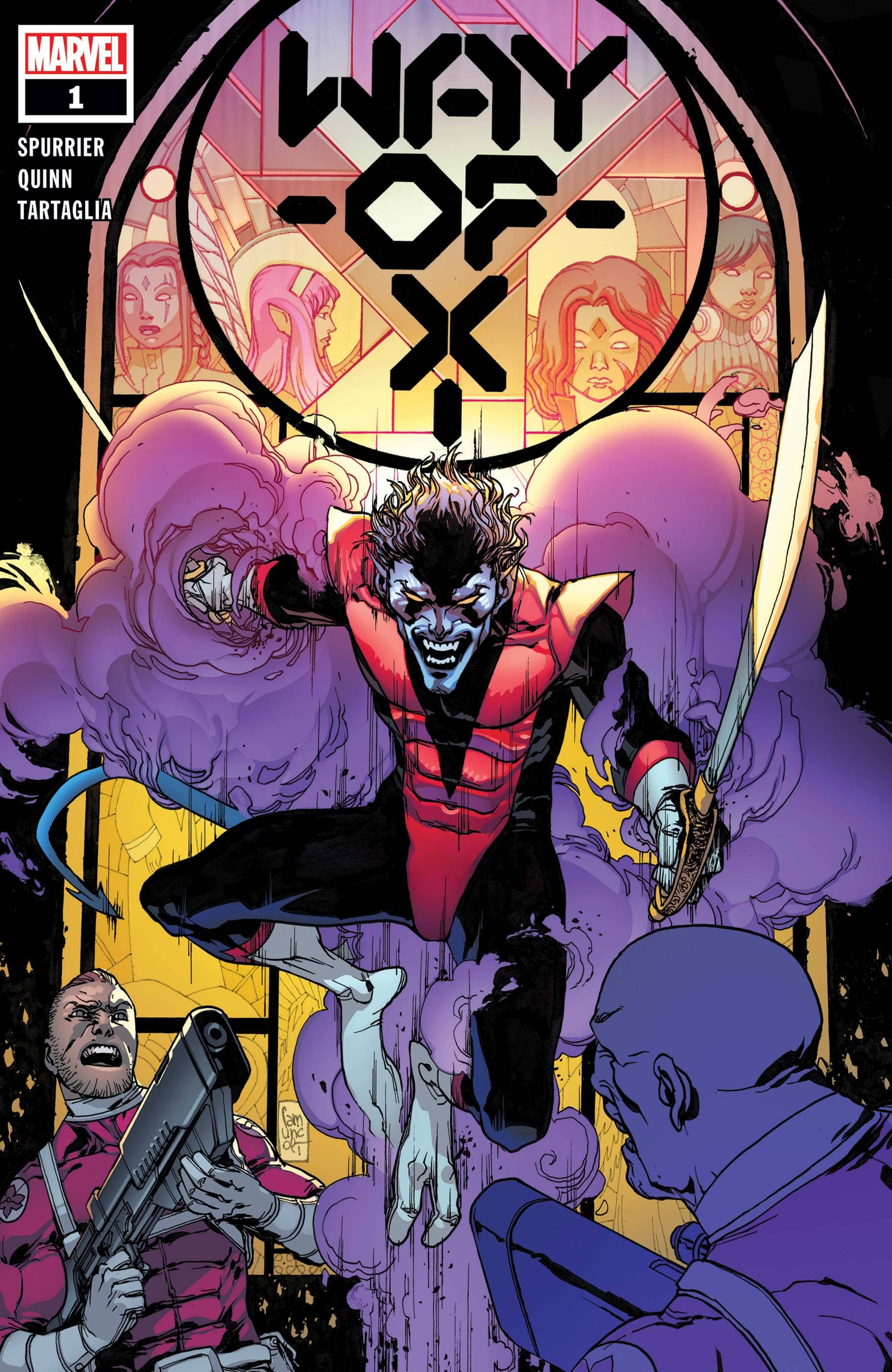 In which we see Nightcrawler, two suicides, and a grave. Warning: Here There Be Spoilers.

I’m going to open by saying that this is the fifth draft of this review that I’ve thrown at my computer. My original effort sprawled out to a little over seven-thousand words, and while the poet Les Murray can drive a hitchhiker that extra hundred miles home, or train a greyhound on liver and beer, none of that sprawl is particularly useful for a book review — even if that book is good enough to siphon all the eloquence you’ve got, and this one Is.

What follows is an abridged tour through the brand spanking first issue of Way of X. Because I am obsessive to what my spouse will undoubtedly agree is an unhealthy degree, I’ve broken it down into more easily-digestible bits. I reiterate my warning: Here There Be Spoilers.

The question on every fan’s mind, ever since the disturbing seventh issue of X-Men, has been just what, exactly, Nightcrawler’s new Mutant Religion is about. The answer is that it isn’t a religion at all — Nightcrawler is formulating a system of morality that is appropriate for a land where time has no meaning, and there is no death. We are treated to two excerpts (one formal, the other decidedly not) of what good old Kurt has been wrestling with. And that quandary turns out to be that… he has no idea what’s wrong with the nation. Something is off, some bad seed is growing, but although the reader can pretty easily identify what that is, it’s more difficult to see a picture when you’re standing in it. Something is wrong, and the old answers won’t serve, so it’s time to ask better questions.

Luckily for Nightcrawler, it doesn’t seem like he’s the only one who is concerned with the spiritual health of the island. Dr. Nemesis might be spending his time growing psychotropic fungus out of a necessary part of his brain, but that’s not all that he’s up to. He’s putting together a study that touches on something vital. Orchis has a branch of churches brainwashing seminarians with anti-mutant rhetoric. Nemesis is proposing something similar, and he needs Nightcrawler’s help because the rules are changing fast.

Social evolution is what we do now, as a species. Birds do it. Bees do it. Apparently, mutants do it, too. Look at Krakoa’s estranged lover, if you want to see what happens to a mutant culture that favors the strong. Spurrier uses Nemesis very cleverly. If Nightcrawler is sensitive to the unconscious (as yet unrecognized) forces shaping Krakoa into a warlike state, Nemesis is the conscious voice, distilling instinct into fact. Warning of some cancerous danger.

4. The Crucible and The Lost

Nemesis points out something that some online fans have discussed in the internet spaces where we lurk: the fact that mutants who enter The Crucible (almost always, the more warlike mutants) get preference when it comes to resurrection. They cut the queue — and leave the peaceful mutants (or anyway, the mutants who do not approve of violence) languishing with the precogs. More on them, in a minute, I assure you. Eventually, perhaps, there won’t be any pressure to revive the gentle ones. As it is, the Crucible itself is putting agonized powerless mutants against people like Magneto who sermonize on the glory of violence whilst hurtling metal shards at their weak flesh. There’s another poem, by a man named James L. Dickey. It’s called ‘The Heaven of Animals.’ After you get past the lovely verses about moist-eyed bunnies and pretty birds, you get to this:

For some of these,

It could not be the place

It is, without blood.

These hunt, as they have done,

But with claws and teeth grown perfect,

More deadly than they can believe.

And crouch on the limbs of trees,

Upon the bright backs of their prey

In this poem, animals fight, die, eat or are eaten, only to rise again in the morning. Krakoa is this variety of heaven. It’s a haven, at least. And it’s full of predators who will fill their bellies.

5. Pixie and the Patchwork Kid Cult

Carl Jung, the great physician of the mind, said that we must choose our mythologies, lest an unwanted myth choose us. That precept is at the center of this book. All the cultist, undeniably frightening, undercurrents (fed from Exodus’ dark spring) are symptoms of a mythless nation attracting a story they might not want. The mythology that young adults like Pixie are being drawn to is a dark cult of suicide, meaningless death, and equally empty resurrection. It will be interesting to see what light Nightcrawler can bring.

6. The Dead Who Stay Dead

In addition to the gentle corpses of the mutants who will not fight, anyone with precognitive ability has been secretly confined to the vault. The terrifying Patchwork Man is somehow linked to Xavier’s estranged son — who is himself intimately connected with one of these permanently defunct precogs. This, then, is the mystery at the heart of this book: what happens when the thing you bury, the idea, the memory (the unhappy person) begins, despite all of your efforts, to rise? I’m certain that some verses at least (possibly the ‘brain farts’) will be culled from Kurt’s book of wisdom. Here’s a verse from a chapter that didn’t make the final cut of the book he follows: If you bring forth what is within you, what is within you will save you. If you do not bring forth what is within you, what is within you will destroy you. The precogs are buried. They will surface. Soon.

Krakoa is balanced, precarious and teetering, on the head of a pin. There are no angels there. Luckily, there may just be a saint.

Bob Quinn is gifted with fast, sure hands and an eye for character that isn’t matched by any artist in the current generation. His panels switch tone and flavor with breakneck speed, as the plot requires, without ever seeming to clash, and without seeming rushed. His line work is detailed, soulful, occasionally absolutely hilarious — humor balanced with skill; exactly as needed. When Magneto pontificates, when a character suffers, when Kurt pranks — or prays — we feel what we are supposed to feel and we see what we need to see. Quinn is right up there with Pepe Larraz, when it comes to details and imagery. Javier Tartaglia’s colors are fresh and strong, contributing a great deal to the atmosphere of the story. Regardless of whatever you think of the story, the art is magnificent.

I’ve, shamefully, managed not to talk yet about the voice of these characters: the way they feel while you’re reading this book. I was particularly nervous about how Spurrier would balance the different (disparate) aspects of Nightcrawler’s character. To my great joy, he got Kurt exactly right. He pranks, he prays, he broods and empathizes: I could not ask for a better take on a character I love above any other. It’s perfect. Dr. Nemesis, Magneto, Pixie, The Lost, even Xavier are all spot on as well. You could not ask for better characterizations — or a better plot. Way of X is the best X-Book I’ve read in this new era. It reminded of what comics are supposed to do. I can’t wait for the next issue.

Way of X does what comics are supposed to do — and what many of them have forgotten how to do.