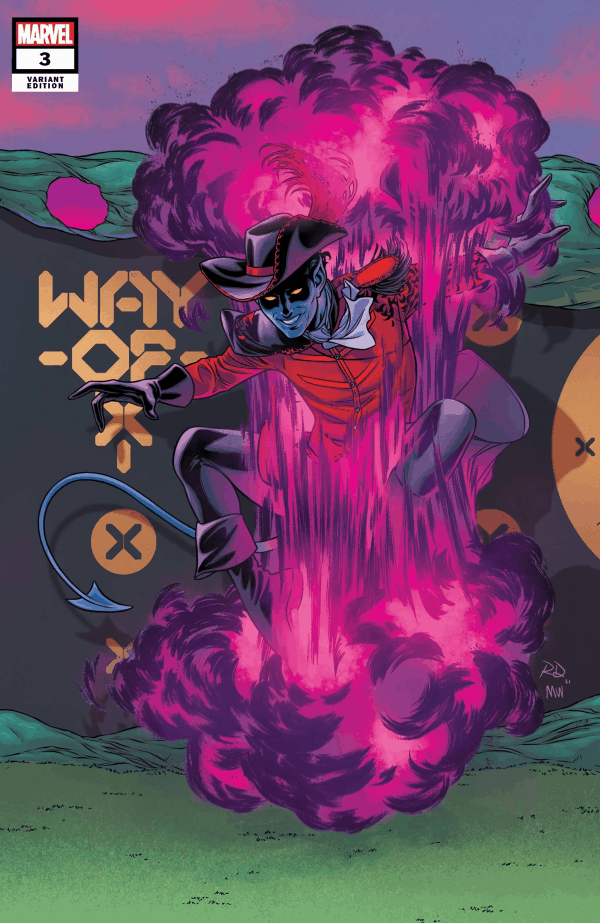 The Hellfire Gala might be over, but some mutants have a lot of cleaning up to do.

There is an awful lot to love crammed into this issue — its also got more wrong with it than the other two installments. Because the flaws won’t make sense if I neglect to set the diamond, I’ll start with the much more plentiful positives of the issue.

First, the opening sequence wherein Nightcrawler gets progressively drunker and makes a substantial ass of himself was damned near perfect. It was wonderful to see scenes from previous books playing out from his perspective  with plenty of beauty and wonder going on in the background. For example, did you all see Wanda dancing with Magneto?

David’s plan to flush Onslaught from the psyches of the girls was cruel, and possibly not easily justifiable, but definitely effective. And the dual nature of Stacy’s work in The Bower, as well as the reminders that they’re fighting for the ‘little people’ of Krakoa, were absolutely magnificent. I want to personally adopt all of those abandoned lil bebbies. It was good that she pointed out that she takes note of consent (we need to see more of this in comics) and that was a necessary contrast to Legion’s approach.

The art was, frankly, amazing. Quinn pours so many details into such a small area that it’s a wonder that he hasn’t gone blind yet. The design of this book is astonishing. And the colors provided by Javier Tartaglia were lush and nuanced — they added tremendously to the overall effectiveness of the already genius line work.

Now for the flaws. First, Nightcrawler has never been the kind of character to slutshame Anyone. Even during Chuck Austin’s abysmal nadir (I hope that my phrasing doesn’t inadvertently create a double negative effect, since abyss and nadir mean something so similar, but you have to understand that this was bad) Nightcrawler treated Stacy X with respect. Yet here he is accusing her of creating a brothel and acting appalled at the sight of condoms. Given his earlier life, we’d better hope that Kurt used condoms. Otherwise the main mutant population would be largely blue and furry.

True, he changed his tune pretty quickly once Stacy clocked him a good one, but if Chuck Austin can get the tone of an x-character right and you can’t, boy howdy. I should say that Austin’s TV work has been really good. He just trashed the X-Men. It’s more than possible to be religious and accepting of sex work as a legitimate and beneficial profession — so long as no one is coerced by force or lack of money. And out of anyone, Kurt would be the one to see it. I was pleased that Stacy’s work is going to be central to the soul of the story, but I was disappointed by the fact that Nightcrawler was the one pouring  $#/+ all over it, given the history of the character. I’m disappointed in that aspect of the writing.

The second flaw was hardly a lesser sin, and well worth mentioning: canonically, Nightcrawler drinks beer. The dude is German. Gin won’t cut it.

All in all, this was another solid issue in what is shaping up to be a wonderful series. This issue was a diamond with just one non-fatal flaw marking up the surface.

This was another solid issue in the series that is quickly becoming the best that the Krakoan-era has to offer.