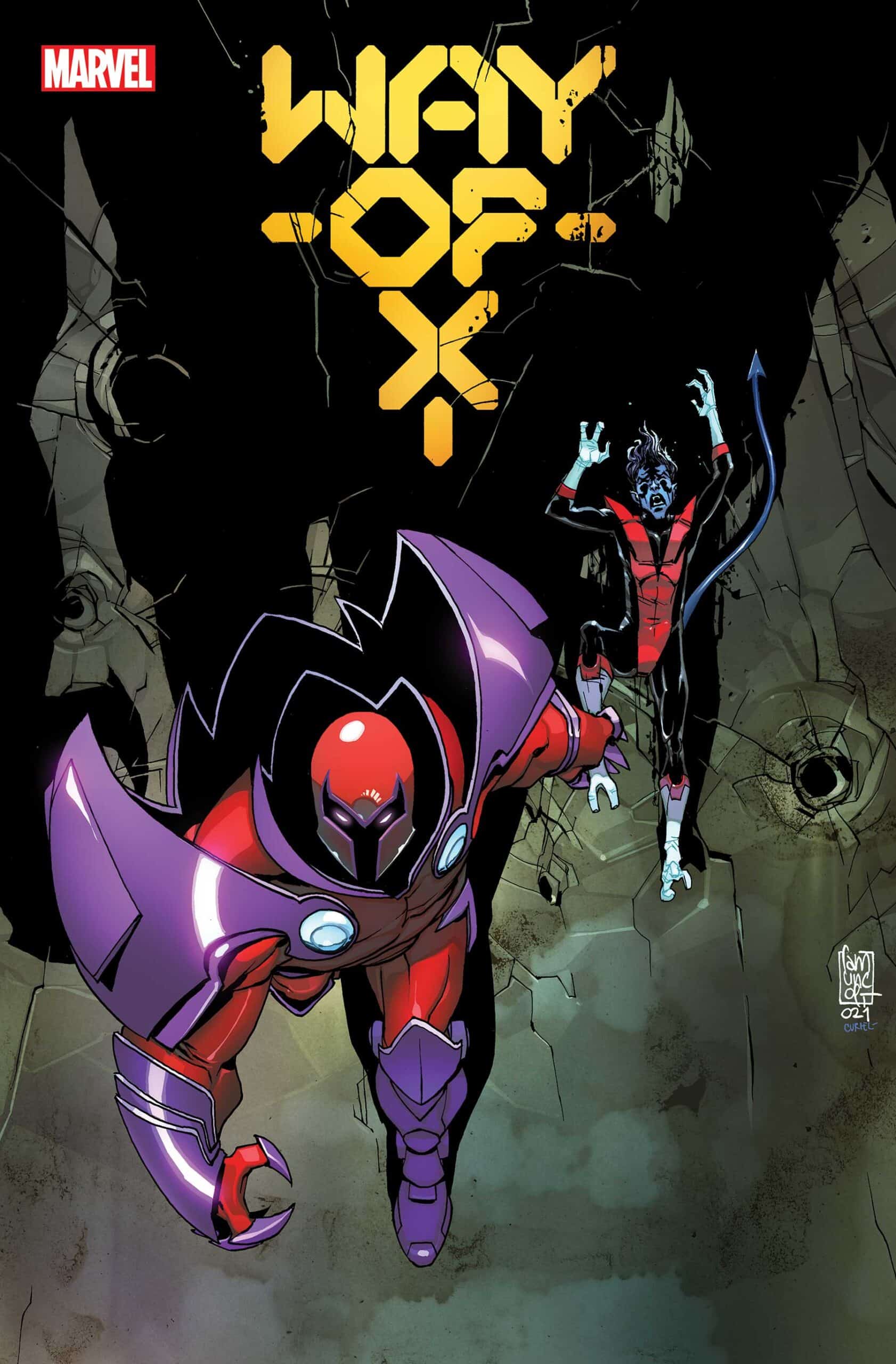 Onslaught has entered the hearts and minds of the resurrected, and Nightcrawler has discovered his secret entrance, but there's a moon falling from the sky and the time he has to stop the carnage is running out...

This penultimate installment corrected a few of the missteps of previous issues, and it did so in a way that was profoundly moving — though not bereft of vomit jokes. Although Way of X has reached its conclusion, I get the feeling that it will continue in some form after next month’s Onslaught Revelation, and I sincerely hope that I am right, because Spurrier has hit his stride in this issue and is flat-out running in terms of the writing.

I’m still not happy about the fact that Spurrier chose to traumatize a gay couple during Pride month, but there’s an apology for that buried within the dialogue and I think that he has probably learned his lesson from the reaction of fans. We’re traumatized enough, day to day. LGBTQ people don’t need the fact that some people think of us as things rubbed into our faces.

There was a lot of real beauty in this issue, and I’ll get to that in a minute, but I wanted to unpack one narrative problem that plagues many stories which, like this one, are driven by the very real importance of compassion and the duty of religious folks to love their enemies. Every major religion teaches the importance of forgiveness. That’s just a fact. But forgiveness isn’t worth a blessed thing if a person is forced to give it. I remember fighting with my sister and being made to apologize for it afterwards or receive a worse punishment. I’d say ‘I’m sorry’ of course, but I absolutely wouldn’t mean it. Here, Fabian Cortez is given a choice between saying those words to Lost, a woman whose family he murdered, or dying and going to the end of the resurrection queue. He seems to have a real revelation (despite the fact that all his progress is nullified by what happens next) but it still rubbed me the wrong way, because of what he did to Lost.

Forcing a person to sit down and ‘make peace’ with their abuser is a means of revictimizing them. That’s why courts will sometimes question the victim of a violent crime separately from their abusers. Every time Nightcrawler brought them together, they would fight, and it’s difficult to wonder why. Fabian wanted to maintain his privilege, his ‘right’ to use other people as objects. And Lost was constantly being retraumatized by exposure to the man who badly hurt her.

While Nightcrawler is falling through the air, meting out justice in his role of Aeschylusian Kindly One, Legion is having revelations of his own, both about the kind of man he is and how he’s connected to his father. The conversation between the two characters, Xavier and David, was phenomenally well executed.

Xavier is presented as a man who desires to be good, but who buries his fragility under so many layers of ‘I know best’ that he hurts people. And worse, he justifies inflicting that hurt as his right.

David both recognizes this and understands that he has been enacting the same patterns of behavior in his treatment of the people around him. He treated Mercury and Loa this way when he used their brains as a trap for Onslaught, he’s treated Nightcrawler this way by pushing and manipulating him into helping him, and he knows that he has exactly the same potential to cause massive harm (while attempting to justify it) as his father.

In this way, both Xavier and David are shown to have at least one thing in common with Fabian Cortez — a fear of rejection so large and so strong that they would rather hurt people and be feared than make themselves vulnerable.

The juxtaposition of this frankly selfish attitude with Nightcrawler literally burning his flesh away and dying to save everyone else while David and Xavier were squabbling was as stark as you can get.

Also, I have to say that, as someone who is such a fan of Nightcrawler that they have two Kurt tattoos (overkill, I know, but I’m nothing if not passionate) the whole ‘teleports a moon to save a world’ scene caused some real mixed emotions. But, like, in a good way. On the one hand, this action is the most Nightcrawler thing one could imagine. This is the second time that he’s died saving the lives of others, and it was so beautifully (transcendently) rendered that it made me tear up.

On the other hand, even if you know that the resurrection protocols would bring him back (while providing a handy amnesia-driven plot point as it happens) it was horrible to see him suffering.

If Spurrier (or anyone) could keep writing him in this vein, I would be happy.

I should also say that the stunted, underfed theologian inside of me loves the idea that you have to work to receive a revelation. You have to till the sacred land of your soul and prepare your mind to gain transcendence. If this understanding had been shown a bit more in previous books I would have enjoyed them much more.

The art in Thai story was absolutely magnificent. I’ve started looking forward to everything Bob Quinn has a hand in creating. I’ve never seen an artist with such a wide emotional range. Want vomit jokes? A gag about a girl who poops ice cream? He’s got you, fam. Want an emotionally resonant visual revelation set on a desolate moon in the depths of space? He can do that, too. Action? He doesn’t break a sweat. I have never finished a book he’s made and been unimpressed.

This ending redeemed a great many of the faults of previous issues, and it did so in a way that brimmed with revelation and genuine terror. I just can’t wait to see what happens in Onslaught Revelation.

This ending redeemed a great many of the faults of previous issues, and it did so in a way that brimmed with revelation, genuine terror, and stellar art. I just can't wait to see what happens in the finale.