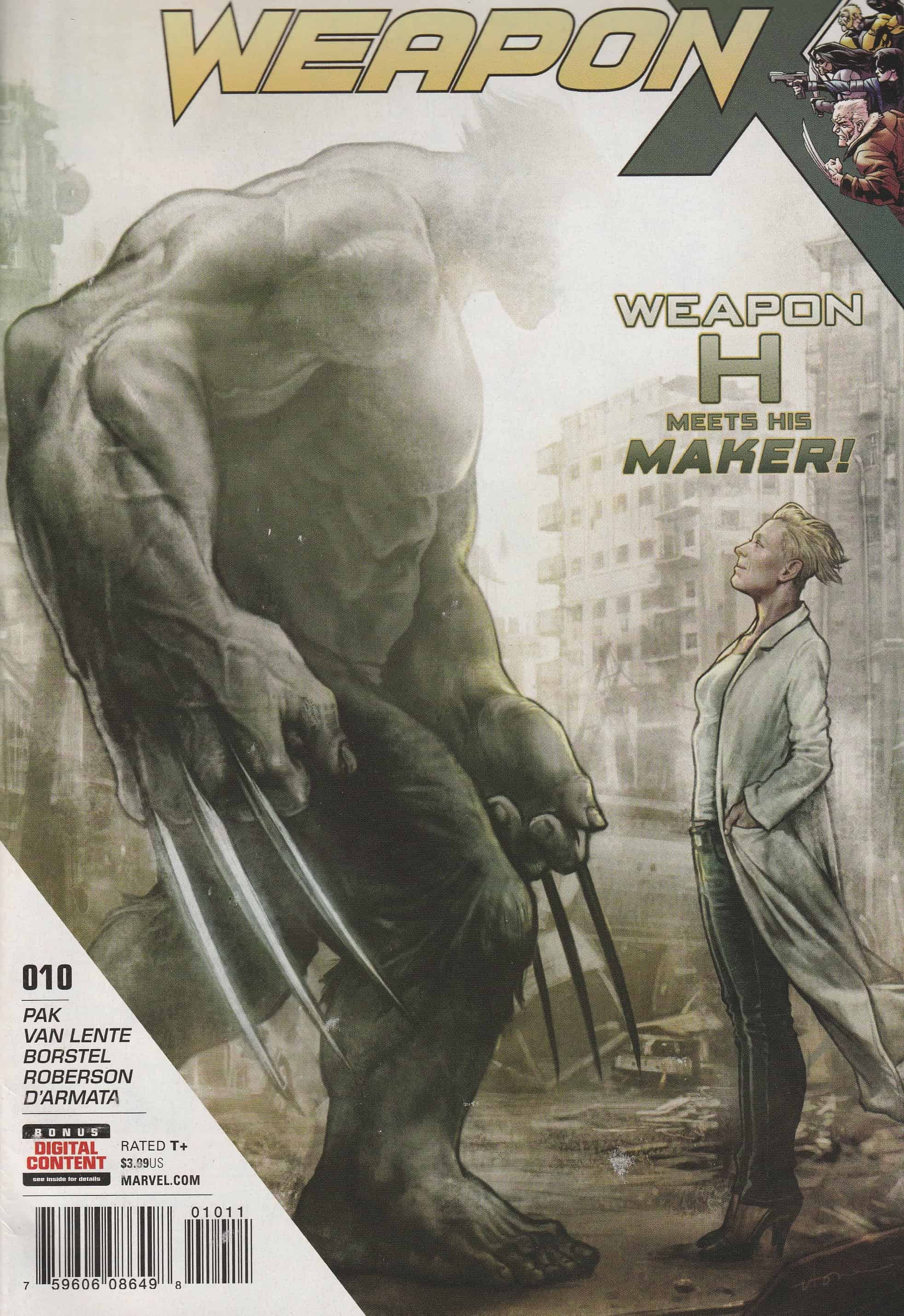 Alba is trying to figure out how to make Hulkverine a perfect killer while Weapon X is hoping how to give Hulkverine back his humanity.  It’s anybody’s guess who will win for the soul of Marvel’s newest Hulk!

Weapon X is chasing Hulkverine but Stryker and Alba got to him first.  Alba holds him under some post-hypnotic suggestion and Hulkverine turns on Stryker, revealing him to be one of his own cyborgs!  Alba escapes with Hulkverine even as Weapon X is closing in, hoping to talk him down, feeling sympathy for a warrior who was turned into a killing machine against his will (similar to the stories of both Logan and Wolverine).

Dr. Alba and Hulkverine are running from the battle that left Stryker a pile of busted robot parts.  Alba still isn’t satisfied with Hulkverine’s willingness to obey commands so she decides to test him.  They land by a bridge and find a homeless couple.  Alba orders Hulkverine to kill them.  However, Hulkverine refuses, shouting at the couple to run.  He then turns on Alba who is very unhappy.  However, at her command, he stops moving towards her and changes back to human.  She ponders for a few moments how to make Hulkverine willing to kill whomever she needs.  The thought occurs to her and she whispers a few words into his ear. 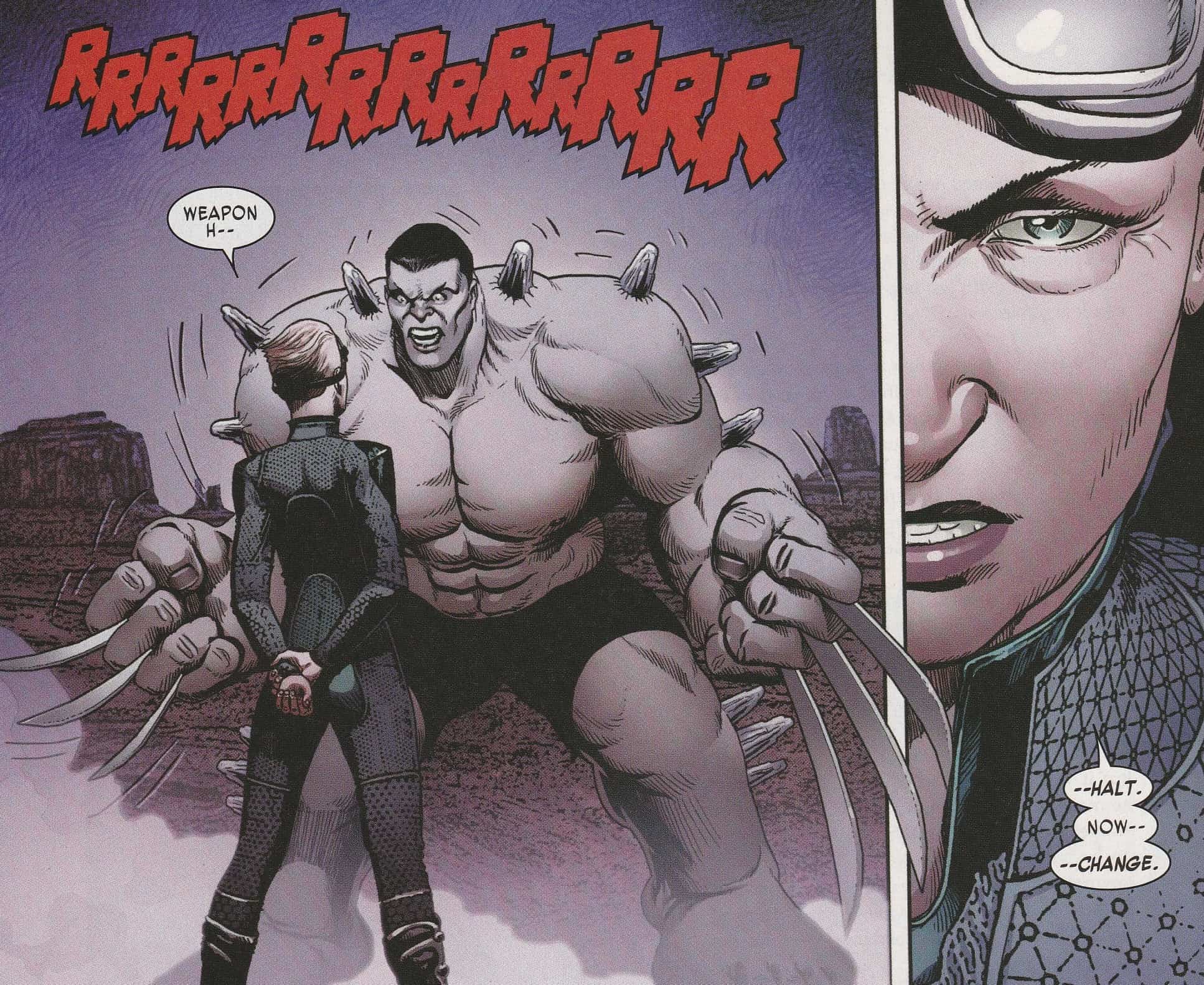 Onboard Weapon X’s shuttle, the team interrogates Stryker (or at least his head).  Stryker mentions a hidden location of Weapon H’s recruitment station but he really flies off the rail when Wolverine fails to understand who their target is.  Hulkverine isn’t the problem.  Dr. Alba is.  So Logan, Domino, and Wolverine take Stryker’s head to research while Warpath, Deathstrike, and Sabretooth stay on the ship searching for any sign of Alba.  The research team find some of what they are looking for:  that this soldier was a perfect killer but his team had been meant to kill an entire village and he instead turned on his team.  He was then sold to Weapon H for experimentation.  Just then, Warpath gets a lead on Alba and the team is on the move again.

Above Arizona, a Boeing 737 isn’t responding to calls from the Air Force.  A squadron of fighters race to meet it.  They shoot it down and in the rubble, Hulkverine is furious!  A group of onlooker’s survey the wreckage catching the eye of the Hulk.  But this time, he’s not letting them go peacefully.  Because all he can see is Dr. Alba’s face on every.  Single.  One.

But Domino provides a nice distraction, leaping in, avoiding Hulkverine’s murderous claws.  Logan and Wolverine show up and Laura takes off her mask to try and talk to Hulkverine.  She appeals to the man he used to be, trying to reach through the brainwashing and rage because she had gone through the same thing.  But just as she seems to be making headway, Hulkverine snaps and stabs her through the chest.

So as we go around this, again and again, I find myself getting tired of what seems to be the same old song and dance.  We don’t seem to be any closer to a resolution and don’t seem to be any closer to any character development whatsoever.  Pak let me down with the Weapons of Mutant Destruction already and I’m finding that I care less and less about what happens to Hulkverine.  I mean it feels like we’ve been through this already.  Weapon X catches up with Hulkverine.  They battle.  Hulkverine escapes.  They chase.  Rinse, lather, and repeat.  And the payoff isn’t expected to be worth anything.

I mean, sure, there are some additional developments.  And we actually get references to Lady Deathstrike for once (that’s right…she’s still on the team, in case you’ve forgotten).  We also got Stryker in a jar (which was reminiscent of the Governor’s unhealthy obsession in the Walking Dead) who apparently is more obnoxious without a body.  But really, this issue just bored me. 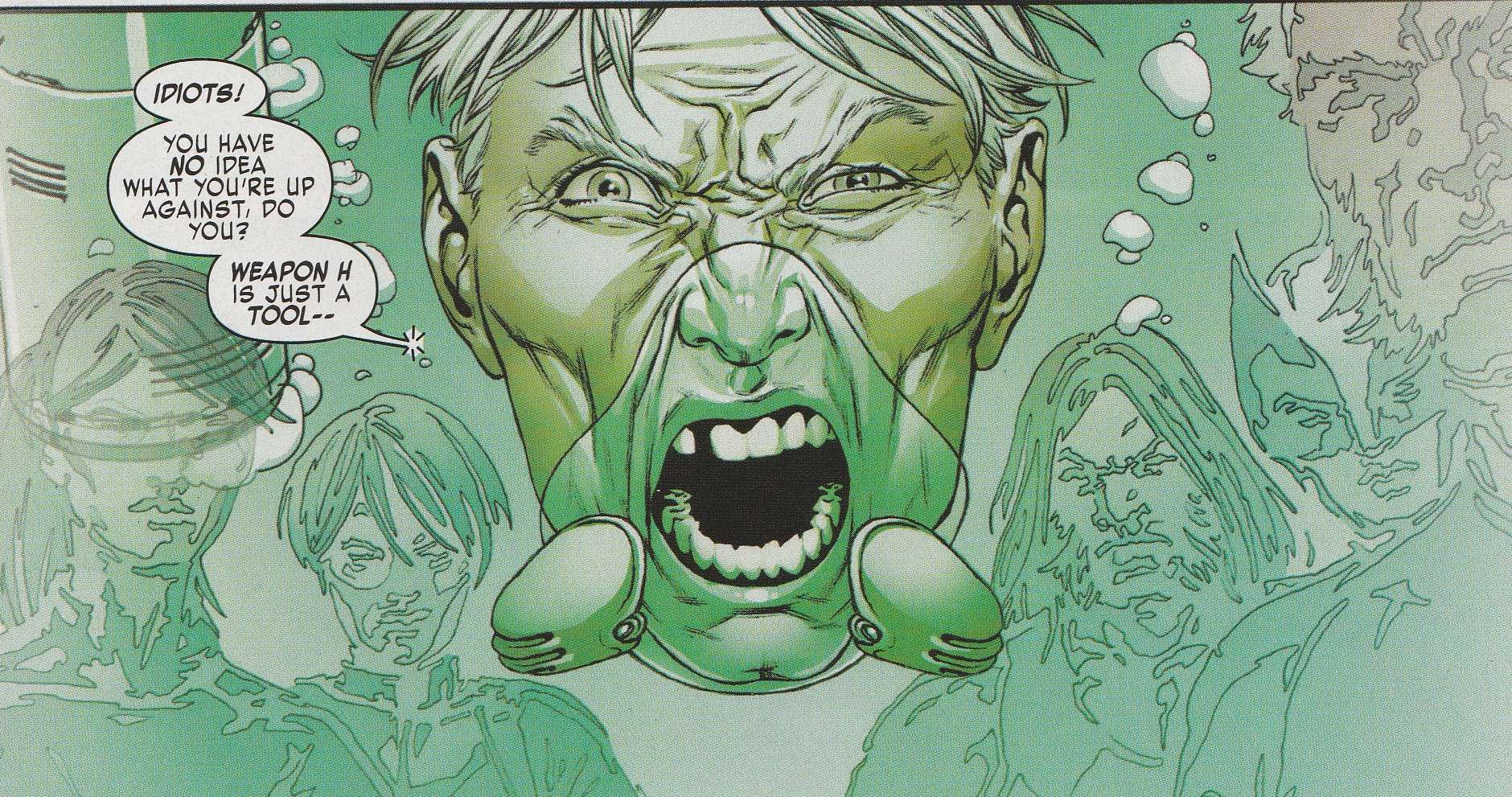 The art is nice, as always.  Roberson and Borstel are great at drawing faces and so once again, the close-ups are nice.  The action scenes, however, are a little lacking (as usual) and unfortunately, those damn spikes coming out of Hulkverine make me cringe every single time I see it and unlike previous issues, they were front and center much of this book (with Alba even using them as friggin’ handlebars).

Maybe, with any luck, Alba can use those handlebars to steer this into a decent finish line.

Final Thoughts:  I’m bored with this story.  The issue itself is decent, but I found myself wanting to skip ahead a month to read the new arc that would be without Hulkverine.  If you’ve stuck with it this long, you’ll probably want to buy this book…but if you’re new to the series and wondering if it’s worthwhile?  Wait four weeks.