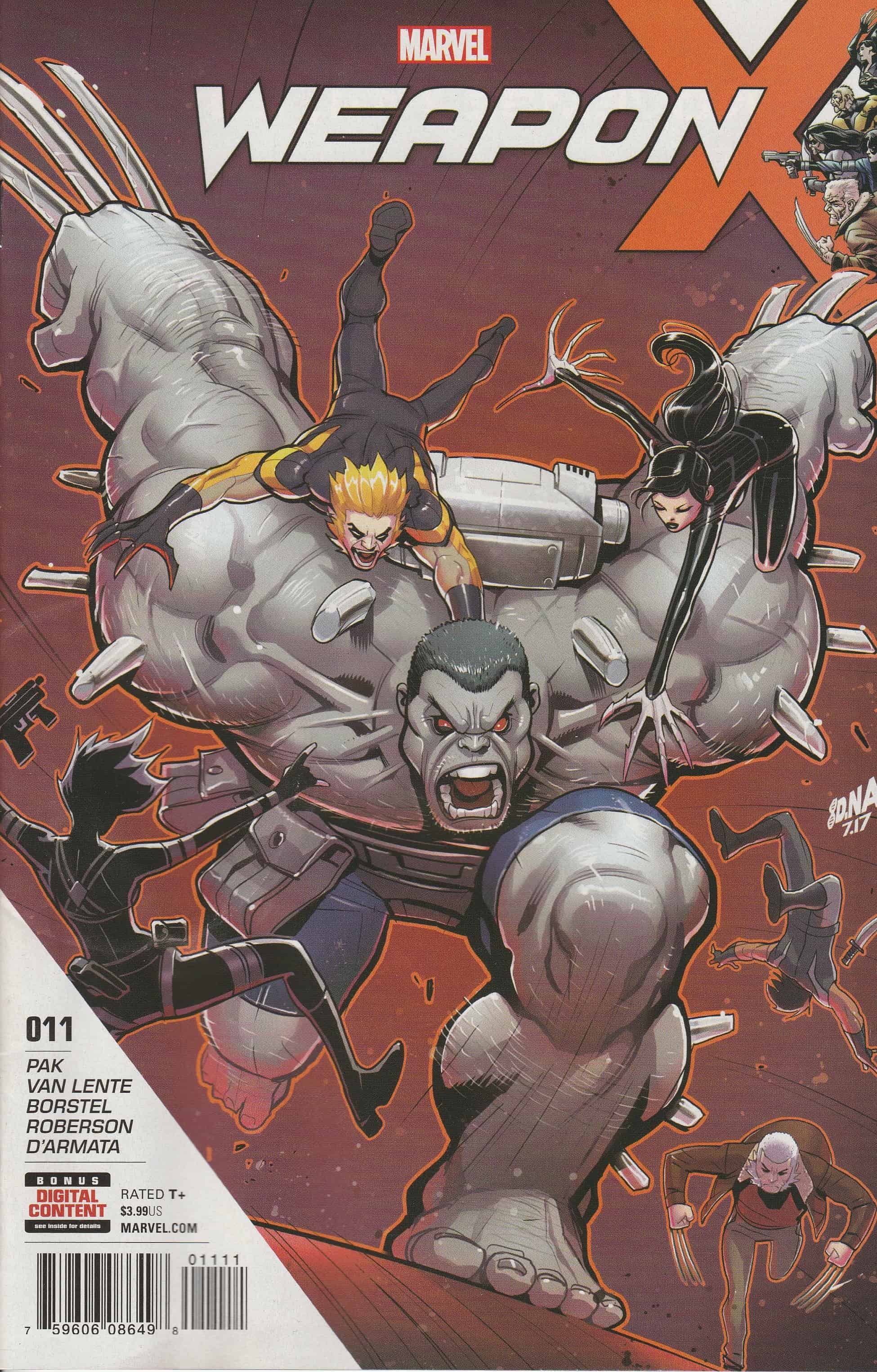 Weapon X battles to save a bunch of civilians from Hulkverine’s rampage all the while trying to figure out how to free Hulkverine from the evil Dr. Alba who seems to control his every action!  The Weapon H story finally comes to a close but will it have a happy ending?

Hulkverine has no memory of where he’s from.  So he’s been running, heading from warehouse to warehouse, looking for clues as to who his family is and where they are.  Weapon X is chasing him, hoping to talk him down from his violent rages.  Stryker’s head is with them, helping Weapon X track down the sociopathic Dr. Alba.  And Dr. Alba has caught up with him, turning him back into a mindless killing machine by making him see her face on every single person he encounters.

As Hulkverine has Wolverine pinned beneath his claws, Domino leaps into action, trying to distract him.  Hulkverine knocks her away but Logan jumps into the fray, actually downing the behemoth for a moment until Hulkverine grabs Logan by his wrists and slams him into the ground.  Hulkverine then turns towards more bystanders, following Alba’s command of “kill them all”.

10 miles north, the rest of Weapon X speeds forward, pushing their jet as fast as it can go.  Deathstrike notices a problem:  Sabretooth has removed the power core (a nuclear reactor) and takes off with Stryker in an escape pod.  On the ground, Domino, Logan, and Wolverine are all still doing everything they can to keep Hulkverine from killing citizens.  But suddenly, Wolverine and Logan both notice a particular scent coming off of Alba (I guess she should have showered).  It’s a similar smell that was coming from Hulkverine.  So while Logan heads off to deal with Hulkverine, Wolverine goes after Alba.  Wolverine grabs Alba and discovers that the good doctor had a needle hidden in her mouth, which is why when she whispered to Hulkverine last issue, he went all crazy. 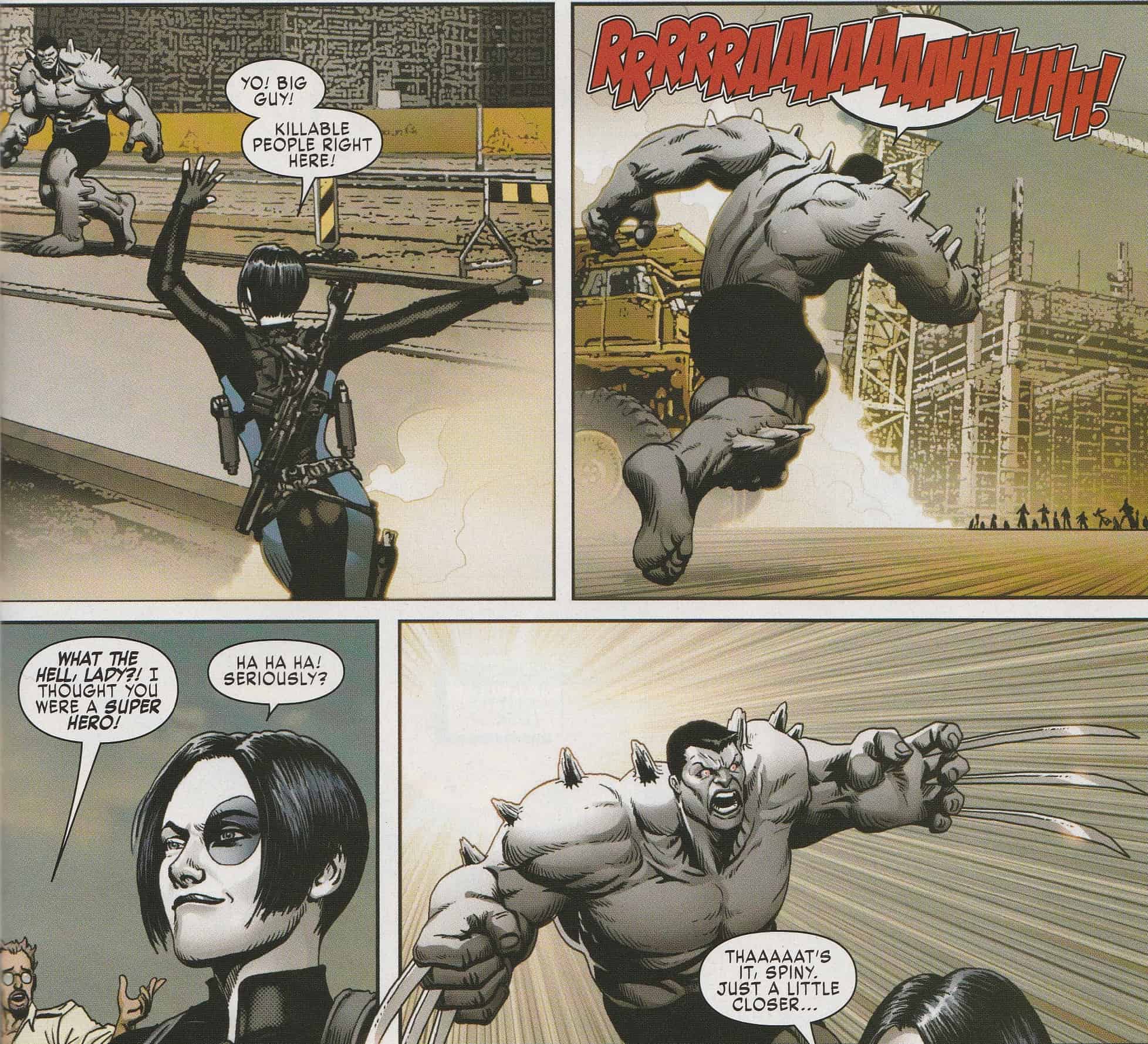 Sabretooth shows up with his bomb, but Wolverine now attacks him, knocking the bomb away.  Logan steps in between Hulkverine and the citizens, attempting to talk him down.  Meanwhile, Domino aims a blowgun and fires a syringe that embeds itself in Hulkverine’s skin and whatever it is, it causes him to stop attacking and ignore Alba’s orders.  Hulkverine sheaths his claws and jumps away.  Logan grabs a motorcycle and speeds after him.

At a nearby Eaglestar base, Logan finds a dozen or so dead soldiers.  And he finds Clay (not Hulkverine anymore).  The two talk and Clay expresses his loss for the wife and child he knows he has but can’t quite remember.  He knows they are out there and the servers at this base contain their true identities.  He then picks up a grenade launcher and blows up the servers.  He reveals that his moving from safe house to safehouse was not an effort to find his family.  It was an effort to destroy all information about his family.  He knew that they would never be safe until they were hidden.  Then he leaves and Logan watches him go. 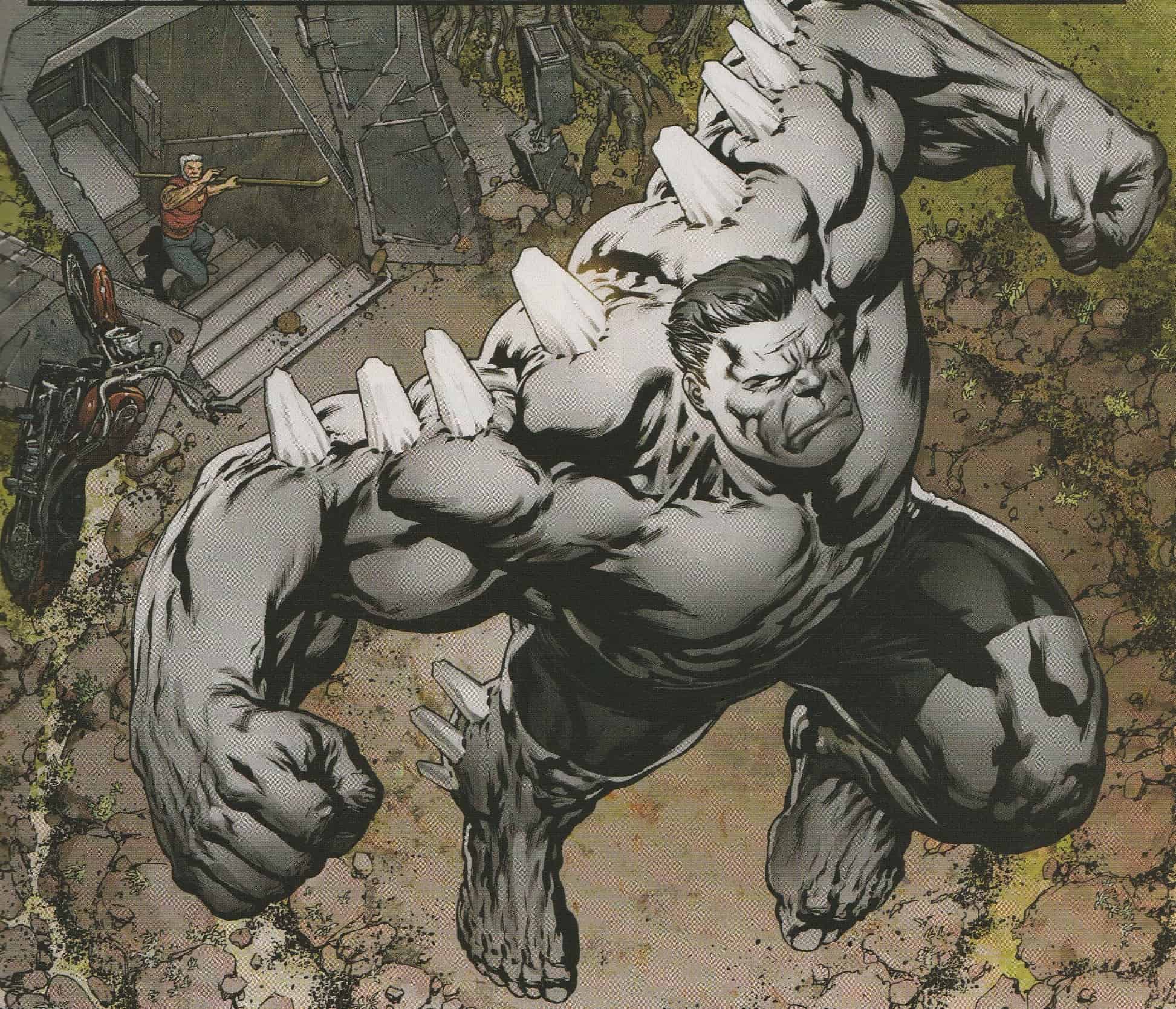 Dr. Alba is now held in a cell at X-Club.  And Stryker has himself a new body and a new flock of followers.

Pak’s entire run on Weapon X has been a rollercoaster.  There’s been good issues, there’s been bad issues.  The runs have not always paid off (The W.M.D. storyline was extremely disappointing).  And leading up to this issue, I was fully prepared to throw this book down in disgust.

And let me preface by saying, no matter what I thought of this book, this Weapon H storyline had gone on for way too many issues and I sure am glad it’s over with.

I actually really enjoyed this read.  No, seriously.  Not a 10/10, but definitely above average.  Both as an individual issue and as the end to the arc.

As an individual issue, this is totally action packed and the scenes are great.  It’s well paced, with plenty of action, up close and personal.  And the art is probably some of the best we’ve seen in this series, with Roberson and Borstel giving us some great scenes, even involving Hulkverine (which is saying something).

Clay was definitely interesting in this article (once again, he proves a more enjoyable character when he’s not in his Hulkverine persona) as we find out that his entire journey has not been to find his family but to erase the evidence that might lead to his family to protect them.  It’s a noble sacrifice and gives him a much-needed dose of humanity.  And to see Logan spring into action was great as he reminds people why he’s considered the best.  I may not care for him always, but at least here, he shows himself to be more than capable. 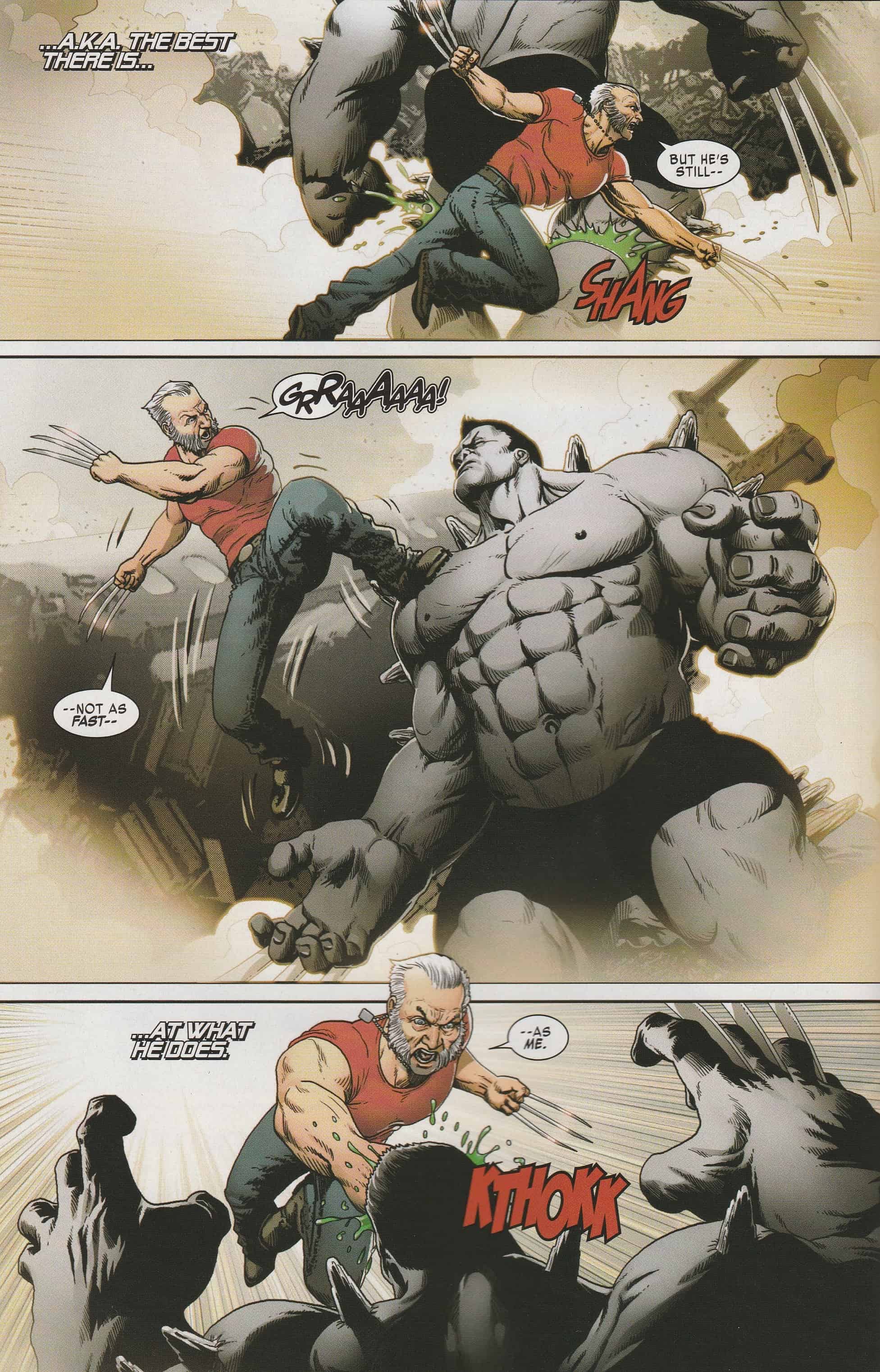 The ending of the book was great too.  Whereas the ending of Weapons of Mutant Destruction wasn’t much of an ending at all, this one wrapped it all up and yet left the characters with the ability to come back as Stryker has found a new flock and Alba is given over to the X-Club (yup!  They’re still around!).

But as with the other books, this one didn’t have much in the way of character for Lady Deathstrike or Warpath.  But for once, I didn’t care.  This was all about trying to stop a catastrophe and the final issue should have been all about Hulkverine and it pretty much was.  So if nothing else, I give Pak credit for wrapping this one up (finally) and now we can move on!

Final Thoughts:  Pak gives us a good wrap up to a story that’s taken way too long to get to this point.  It’s a fun issue and while the storyline has a whole has just dragged on and gotten tiresome, this book is fast paced and doesn’t waste time.  Check it out knowing that the Weapon H story is finally behind us and we can move on now!