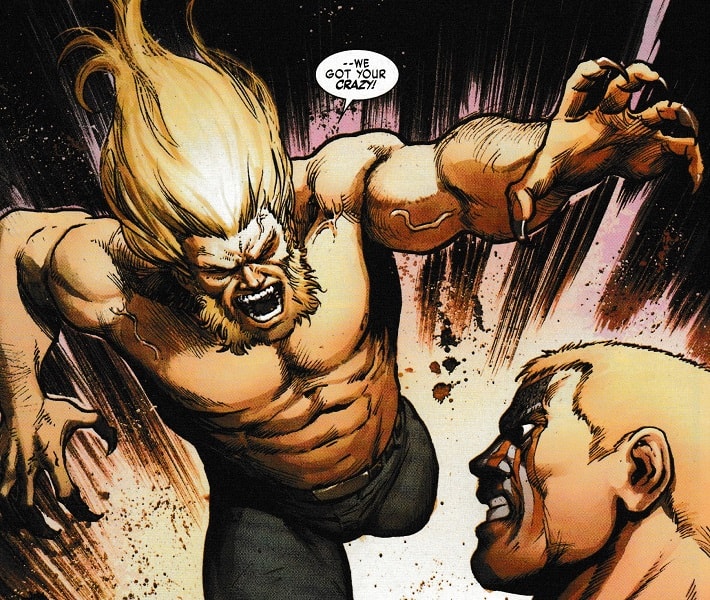 NUKE-CLEAR WAR:  With their backs against the wall, Weapon X only has one hope to defeat Nuke and his soldiers:  to take the same pills.  But those pills don’t just make you stronger, they make you crazy too.  Can Weapon X survive the means of their escape? 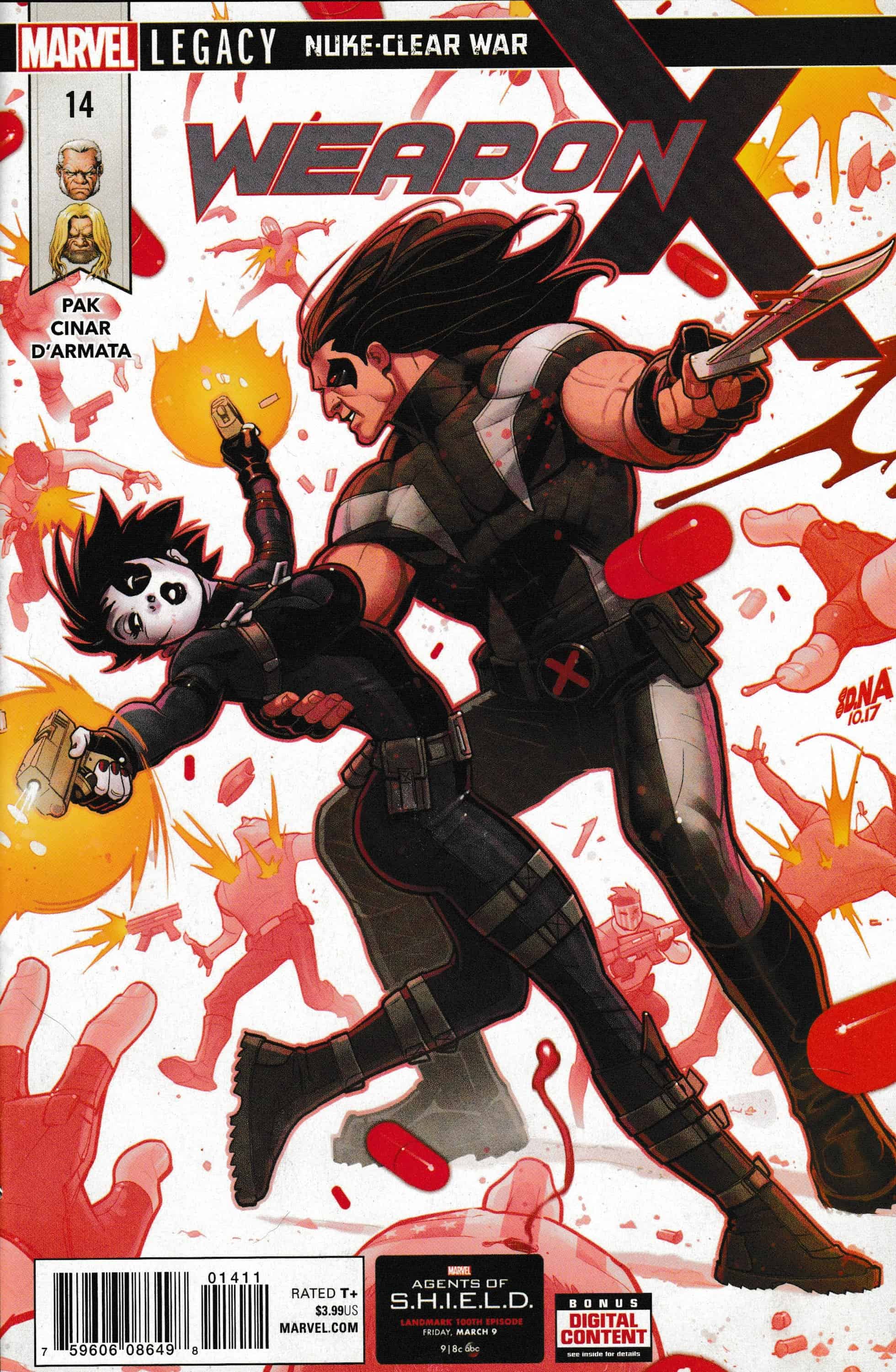 Mutants on the island of Santo Marco were being massacred.  Weapon X went to help out, only to find that the soldiers were using the same pills that Nuke once used.  Nuke is discovered a prisoner, held captive by the man he went there to kill:  the President, Emilio Duarte.  Once freed, Nuke reasserts his control over his men and now he’s after Weapon X.

Even as Warpath holds the door shut against Nuke’s soldiers, Weapon X debates using the Nuke pills to fight back.  Sabretooth is all for it, Logan is unsure.  But in the end, Sabretooth wins out and Domino is even able to convince Warpath. 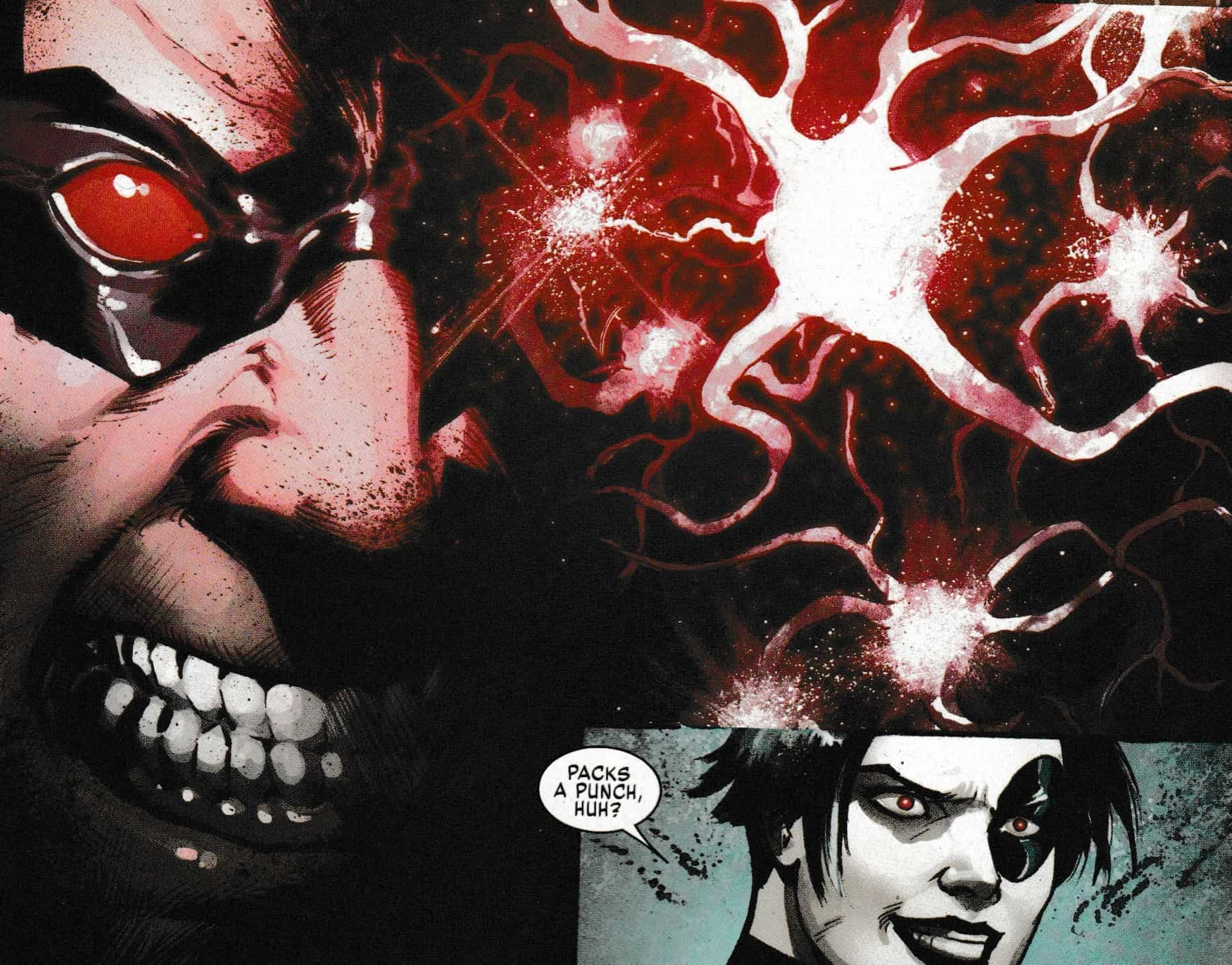 As the soldiers are about to break through…  Weapon X breaks out!  They charge into the gunfire, slaughtering the soldiers.  Even Nuke is no match as he first encounters Logan and then Sabretooth.  As Domino and Deathstrike continue shredding through the soldiers, Domino has an idea.  In the rage of excitement, fueled by the drugs, she leaps above everybody, meeting Warpath in the air, kissing him passionately.  The two continue making out throughout the battle (Sabretooth scolds them for it but he’s just jealous).  Sabretooth then saves Acero and his mutants by intercepting an RPG and throwing it back at Nuke.  When the smoke clears, Nuke is first up and he finds Logan placing detonators on the tanks with the chemicals to make the pills.  Logan intentionally detonates them standing right next to the tanks.

Nuke and Logan both survive, but with Logan out of commission, Nuke prepares to kill the old mutant.  But Warpath jumps in, driving his knife into his shoulder and before the wound closes, opening up a white pill and spilling its contents into the cut, almost immediately calming Nuke down.

With the battle over, Weapon X and Acero lead the remaining military as captives down the City Center in Santo Marco, demanding for the President to be arrested.  The head of the national guard is hesitant but before they can even decide one way or the other, President Duarte crashes through a window, landing on the ground, dead.  In the window stands Nuke, who pops a white pill and jumps into the ocean. 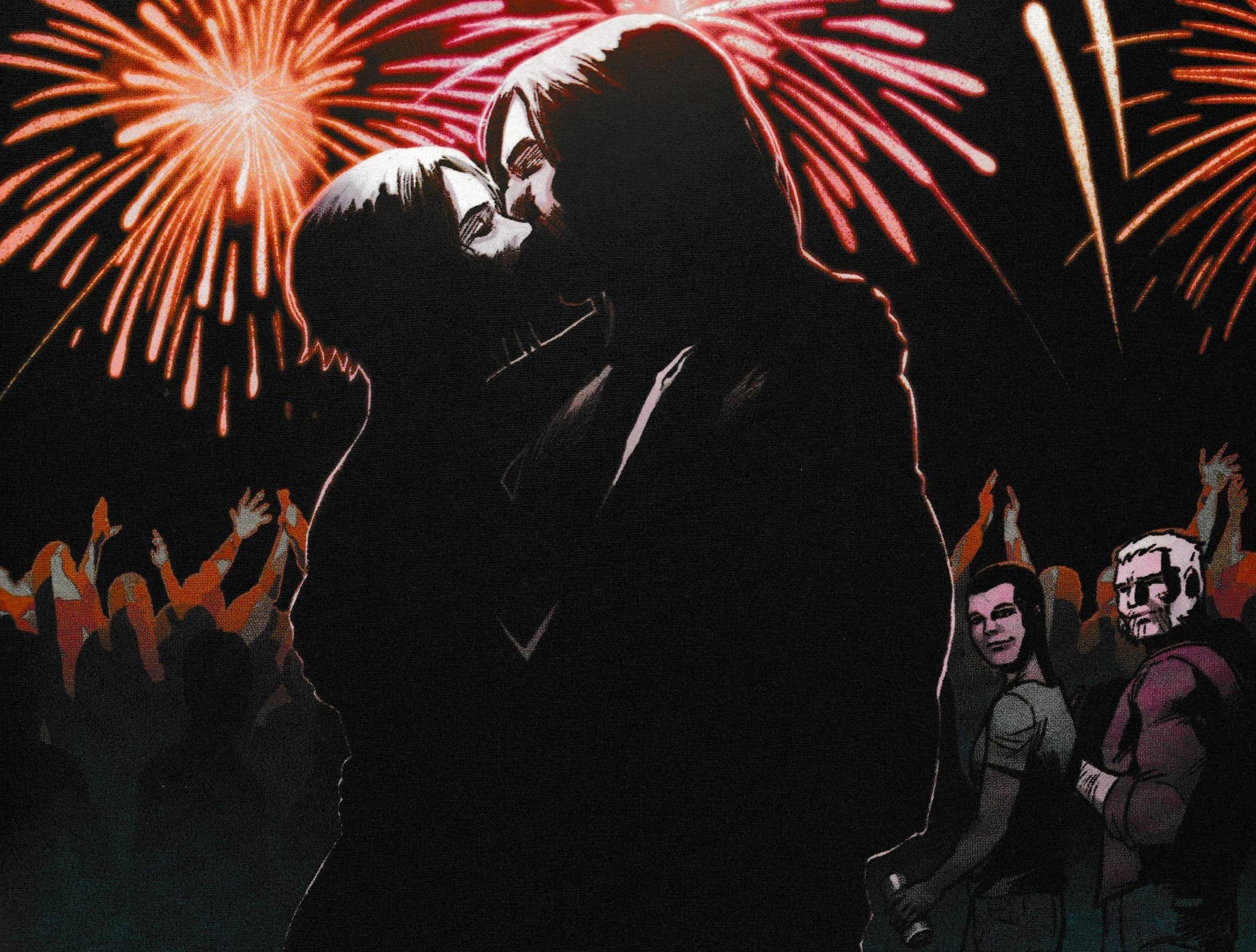 That night, the nation celebrates.  The X-Men’s involvement in the overthrow of Duarte is kept secret, which is what Logan wanted.  Domino confronts Warpath, unsure if their kiss was a result of the pills.  They decide to try it again, this time sober.  Nearby, Deathstrike scoffs at the heroes, tired of being a good guy.  Sabretooth is tired of it too.  Deathstrike shows Sabretooth a handful of red pills she managed to steal.  Sabretooth smiles.

As far as endings go, Pak nailed this one.

It wasn’t my favorite story arc, mostly because I’ve never liked Nuke as a character, but it was fun to read from start to finish.  The only problem I ever really had was the art.  Cinar’s art is not fun to look at.  The best example I can find is the kiss between Domino and Warpath during the big battle.  All of a sudden, Warpath seems to grow twice his size and the idea of them kissing in midair is just silly. 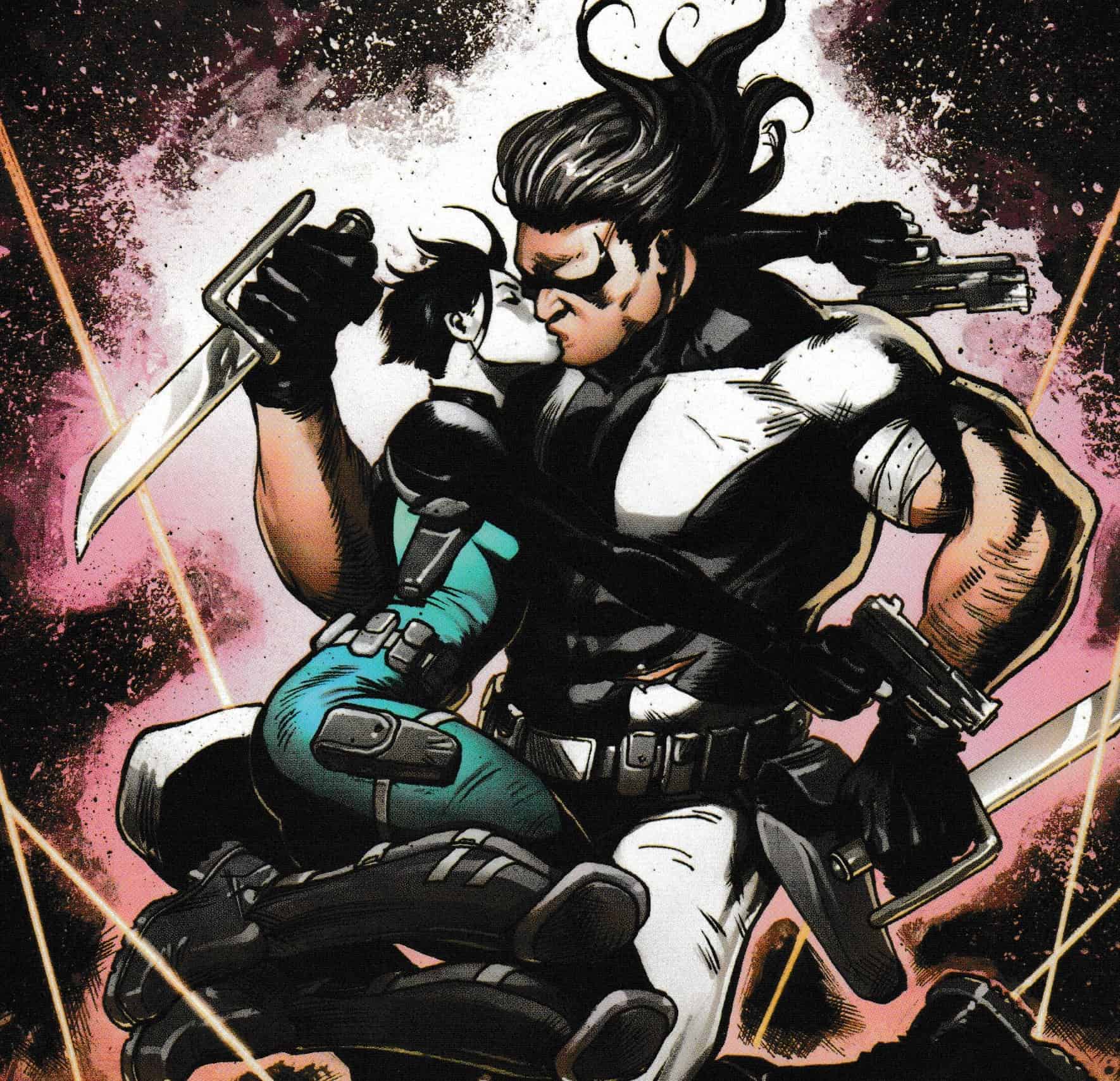 But really, the kiss was my only complaint about this issue.  The action was intense, the scenes were fun, the dialogue was witty.  I may not have been on board at first, but I’m liking the connection between Domino and Warpath.  And I loved the scene at the end.  Having them recognize that their initial kiss may have been due to the pills and to kiss at the end was fantastic.

And finally, we get to hear a little from Deathstrike (who’s pretty much been a background character this entire series except for some small scenes during the WMD storyline).  The ending with her and Sabretooth was great, and I’m really hoping we get to see her in action during the next arc which is clearly going to be dividing the team.  And yes, I know, Sabretooth is supposed to be inverted but I think we can just forget that ever happened…after all, the writers seemed to have.

Final Thoughts:  Pak gives us a nicely wrapped up end to the arc and perfectly sets up the next one.  Some fun character development from several of them leaves me thinking this might be the first story with Nuke I’ve actually enjoyed.