Years ago, Sabretooth used to have an odd way of celebrating Wolverine’s birthday:  he would show up and try and kill Wolverine.  No good reason behind it, just as a way of screwing with the old mutant.  That seemed to have been forgotten.

Now, Logan from a dystopian future is teamed up with Sabretooth along with various other killers.  This particular Logan killed his friends/family while believing that they were villains after being tricked by Mysterio.  The two haven’t exactly gotten along but were willing to work together to first takedown William Stryker and then Nuke.  But now, they have some downtime.  And that can’t end well.

Weapon X is ready for some rest and relaxation (or, as Domino puts it, “Drinking, Dancing, and Debauchery”).  Domino’s ready for some wild fun, especially with Warpath.  But Logan doesn’t feel like partying.  He’s going to remain on the ship.  Once everybody is gone, Logan sits down and starts reviewing some footage from Santo Marco.  He’s concerned about Sabretooth and Deathstrike.  Both are monsters in their own right and he might lose control over them if he can’t find some other monsters to fight.  The ship’s computer mentions that the ship was created to hunt monsters.  Logan thinks that might do the trick.  But a small alarm interrupts him.  The computer announces it is midnight.  And Logan looks at his phone and sees a single message from Sabretooth:  “Happy Birthday”.

Sabretooth bursts into the control room, crashing through computers and the two begin a vicious battle.  Logan pleads with Sabretooth to stop, not for fear of his own life, but for fear of Sabretooth’s.  The two battle as Sabretooth reminisces of birthdays past (including times where Sabretooth has killed important people in Logan’s life).  Finally, Logan gets hold of an economy-sized taser.  It does the trick, but it also shorts out the ship’s navigational computer and sets it on a mysterious course.

Sabretooth doesn’t care that the ship is coming apart.  He continues his onslaught, ignoring Logan’s pleas to stop.  Logan explains that when the villains attacked him (if you haven’t checked out the original Old Man Logan story, go read it RIGHT NOW), it was only when he killed the false-Sabretooth that he really lost control.  Once Sabretooth was down, Logan had lost all restraint.  There was something about that relationship which kept Logan in check.

The ship finally reaches its destination but crashes into the containment facility.  When Sabretooth clears himself from the ruble, he finds several damaged cages, each carrying some sort of creature.  Sabretooth is thrilled to no end.  And even when Logan bursts from the rubble, ready to kill Sabretooth, he is excited.  Finally, a birthday celebration worth his time. 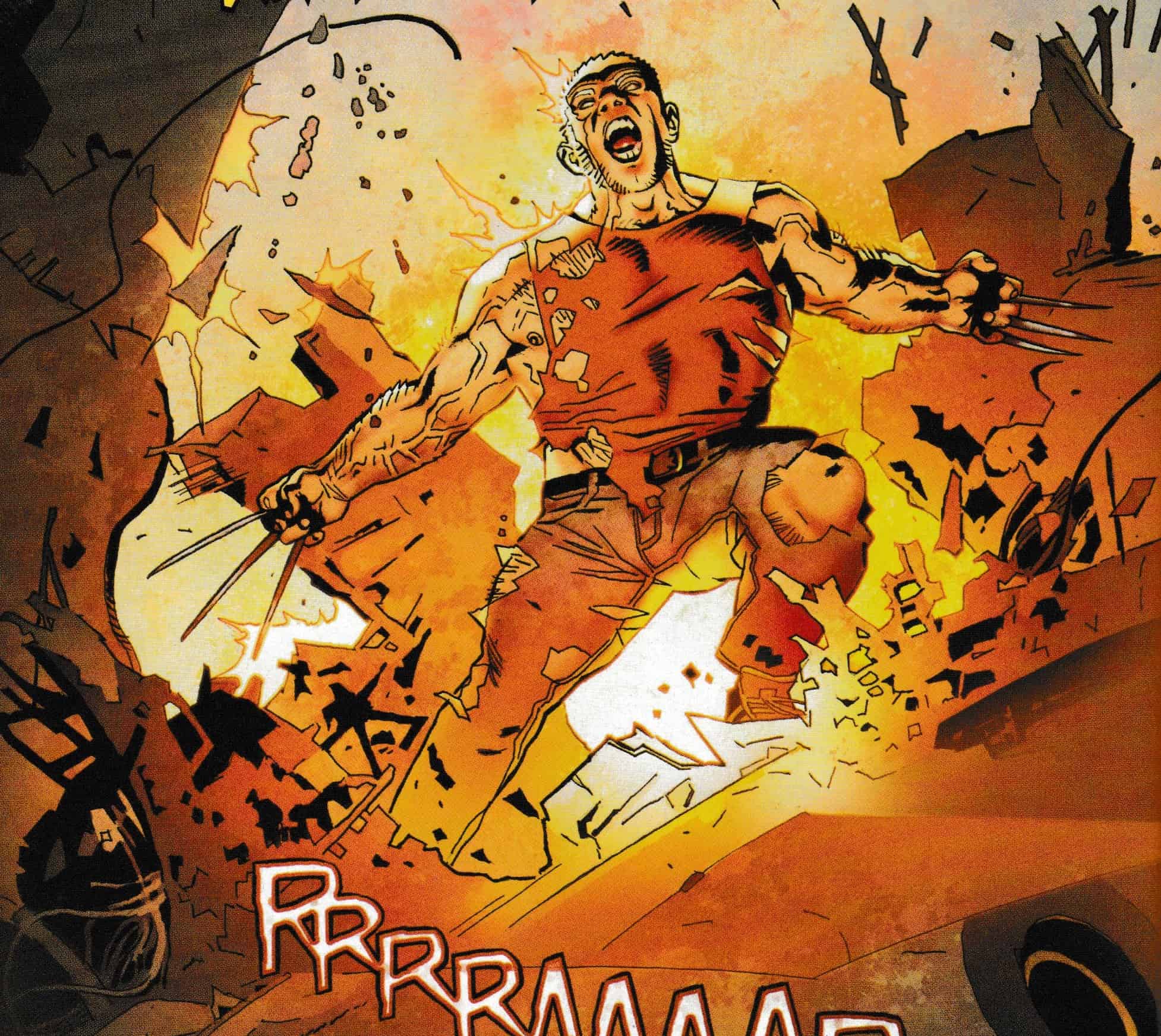 Pak has really been hit and miss for me.  His plots have lost out on some key opportunities in character development, so I’m always nervous when he starts on a new arc.

And within a few pages, my nerves were settled.  Because this issue is Pak at his finest.

Let’s get the only negative thing I have to say about this issue out of the way…  the art…  it was very stylish and fit everything very well.  But sometimes the proportions are just…  wrong.  Almost laughable.  But other times, Boschi absolutely nails it, with a fantastic use of shadows to contrast the colors, great depth in his art.  If it was more consistent, I’d love this book through and through.

I love Pak’s bringing up Logan’s horrors of massacring his family.  And it wasn’t just the events in OML, but years of Wolverine/Sabretooth fights (and even a little nod to the change Sabretooth underwent in Axis).  And it wasn’t just for fun that we see this.  Sabretooth has always wanted to prove that he and Logan are the same.  That they can both be the same murderers.  The same monsters.  Logan has always claimed to be more man than animal…Sabretooth wants to prove the opposite is true.

And maybe it is.

Final Thoughts:  Greg Pak and Fred Van Lente deliver a Wolverine-centric Weapon X story and I’m happier with it than I thought possible!  It’s a story of Logan versus Sabretooth that really gets into nuts and bolts of the relationship.  Maybe it’s been done before, but it’s never left me so excited to read the next issue!