One Too Many? (Weapon X #9 Comic Review) 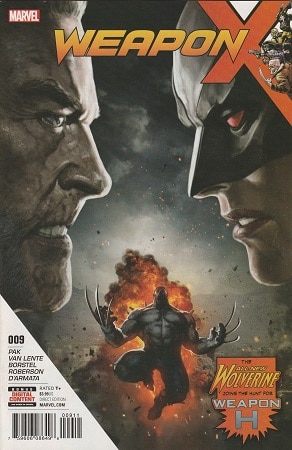 The rampage of Hulkverine continues and the bodies start to mount up! Can Logan save the duped zealot from himself?

What You Should Know:
Hulkverine, a hybrid of Hulk and Wolverine, is running from something, leaving a trail of bodies in his wake.  Meanwhile, two groups are hunting him.  Reverend Stryker with Dr. Alba and Weapon X.  Neither group can agree amongst themselves what to do with him.  Logan wants to talk him down but after getting push back from Sabretooth, he calls in some help:  X-23.

What You’ll Find Out:
X-23 (also known as the All-New Wolverine) shows up to break up the argument between Sabretooth and Logan.  Needless to say, Sabretooth doesn’t take it well…but after the thrashing Hulkverine gave them, he’s no match for Wolverine.  And so she leads the way, tracking down the hybrid. 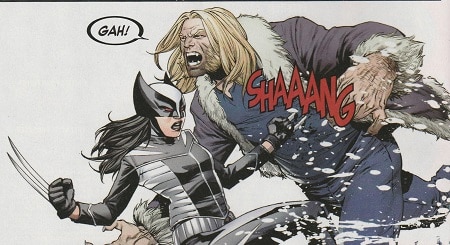 Meanwhile, Hulkverine (also known as Clay) has taken refuge in a cabin.  Stryker and Alba have found him and Alba volunteers to go in and try to bring him out peacefully.  Inside, she finds Clay but he’s not terribly receptive to her.  Held at gunpoint, she tells him where she found him and why he was given to her by the mercenary group he worked for.  Clay, however, is more interested in finding Stryker and Alba is all too willing to give him up.  So Stryker orders dozens of cyborgs to attack.  She whispers something into Clay’s ear (a post-hypnotic suggestion maybe?) and suddenly, Clay hulks out, bursting through the cabin, tearing about the cyborgs, and ultimately smashing William Stryker.  And then…he turns human, falls to his knees, and embraces Dr. Alba???

What Just Happened:
I’ll admit…at the end of last issue, when the surprise guest star (who didn’t surprise me at all) showed up, I did a little eye-roll.  Of course Laura/Wolverine would show up!  Why not?  They have every other killer in this book, what’s one more?  But as it turns out, she fits.  She adds a nice dynamic to the book.  Unfortunately, we now have…um…way more lethal mutants than you can count.  So much so that Deathstrike and Domino don’t even get any lines in this.  And Warpath doesn’t say much (although he does kind of put Sabretooth in his place).

And therein lies the problem that I’m really starting to notice with Pak’s story.  Don’t get me wrong…it’s a good story.  I’m enjoying it and there’s something to be said for Logan trying to help a mutant who went through exactly what he did.  But this isn’t a team book.  This is Logan and Sabretooth with a handful of guest stars.  Maybe now it’ll be Logan, Sabretooth, and Wolverine.  But the rest are all fairly pointless and I want more from them!  I want to see more of Domino and Warpath (admittedly, I don’t care if Deathstrike comes or goes).  But instead, we just get them to help move the plot along.

Still, the book is a decent read.  Some interesting developments with Clay, betrayal by Alba, and holy crap, Stryker is a cyborg?!  I’ll admit, I’m glad Pak pulled this one out.  Up until now, we had no idea how Stryker had returned (although to be honest, I can’t even remember when he died…I think Elixir killed him in New X-Men some years ago).  But now we find out that it’s not really the original Stryker.  That’s not to say it doesn’t have Stryker’s brain and memories, but it’s a cyborg.  As far as surprise endings go, this one was a lot better than last issue.

There’s also a nice dilemma that Sabretooth keeps bringing up…should they try and rehabilitate Clay?  He’s incredibly powerful and when both Logan and Laura first left the Weapon X program, they left a trail of innocent bodies behind.  Sure, it may not be Clay’s fault, but can they ignore the danger he poses?  I’m curious how Pak plays this one out (unfortunately, thanks to solicitations, we know that Hulkverine lives, but I’m still curious how they get there). 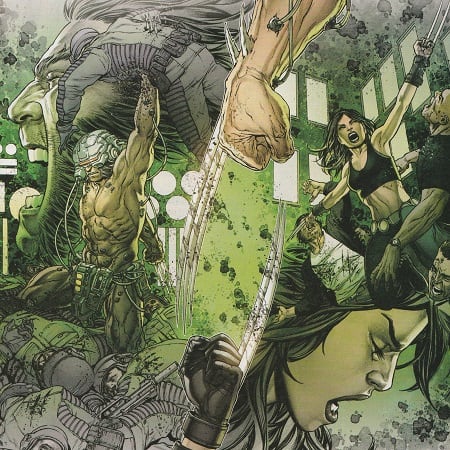 Final Thoughts:  Sure, Hulkverine looks like he was created by a 10 year old boy who just thought how badass it would be if Hulk had Wolverine’s claws.  But if you can ignore the two pages where he uses them, it’s a good book.  Wonderful art, good development among some of the characters, and an enjoyable read.  I just hope we don’t get any more Wolverines…