Web of Venom: Funeral Pyre #1: Where the Action Is! 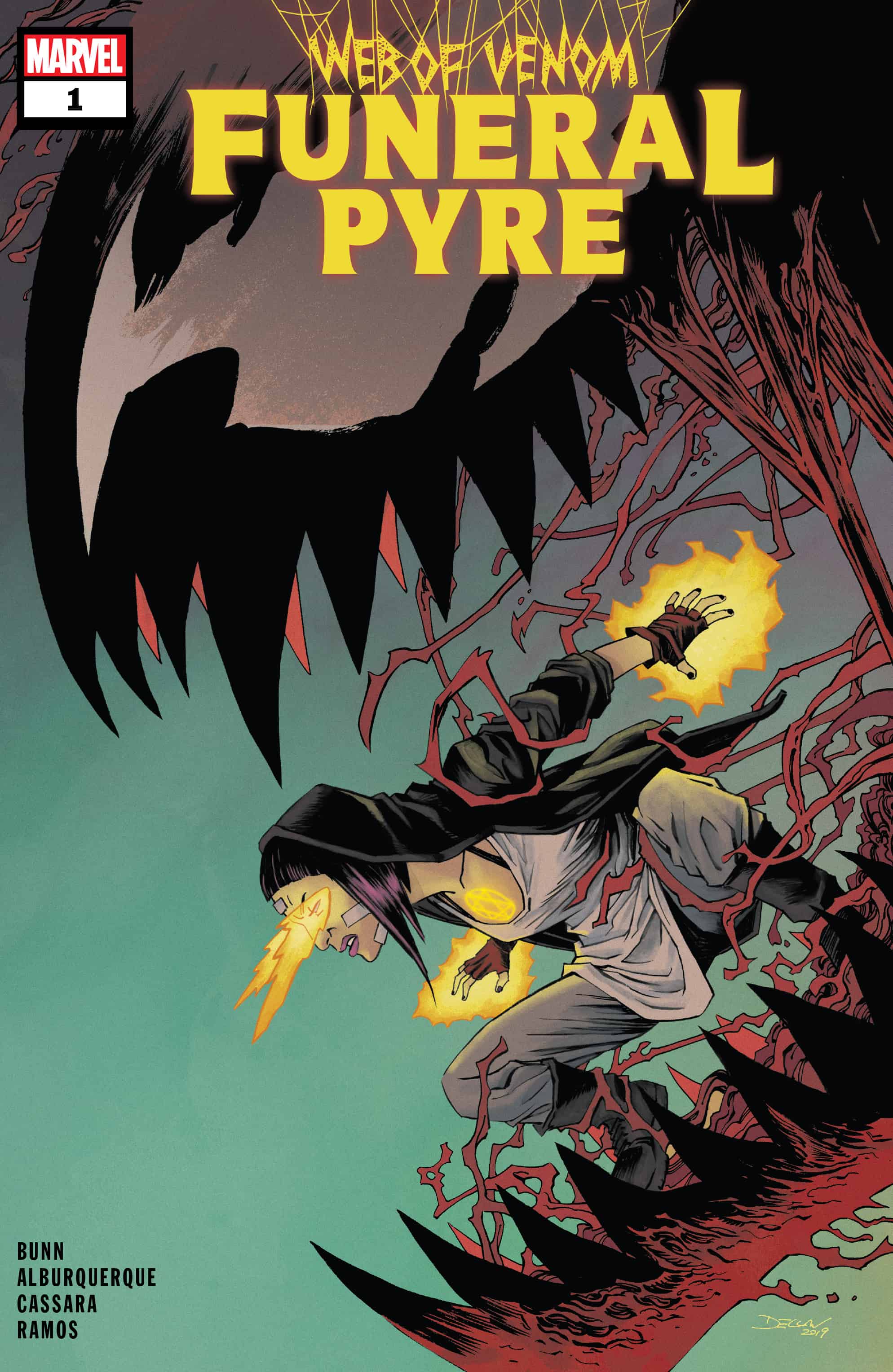 The Absolute Carnage Summer event seems to finally kick off properly with an actual appearance by big papa C himself and following an awesome fight Mania finds herself in NYC ready to face down the devil! 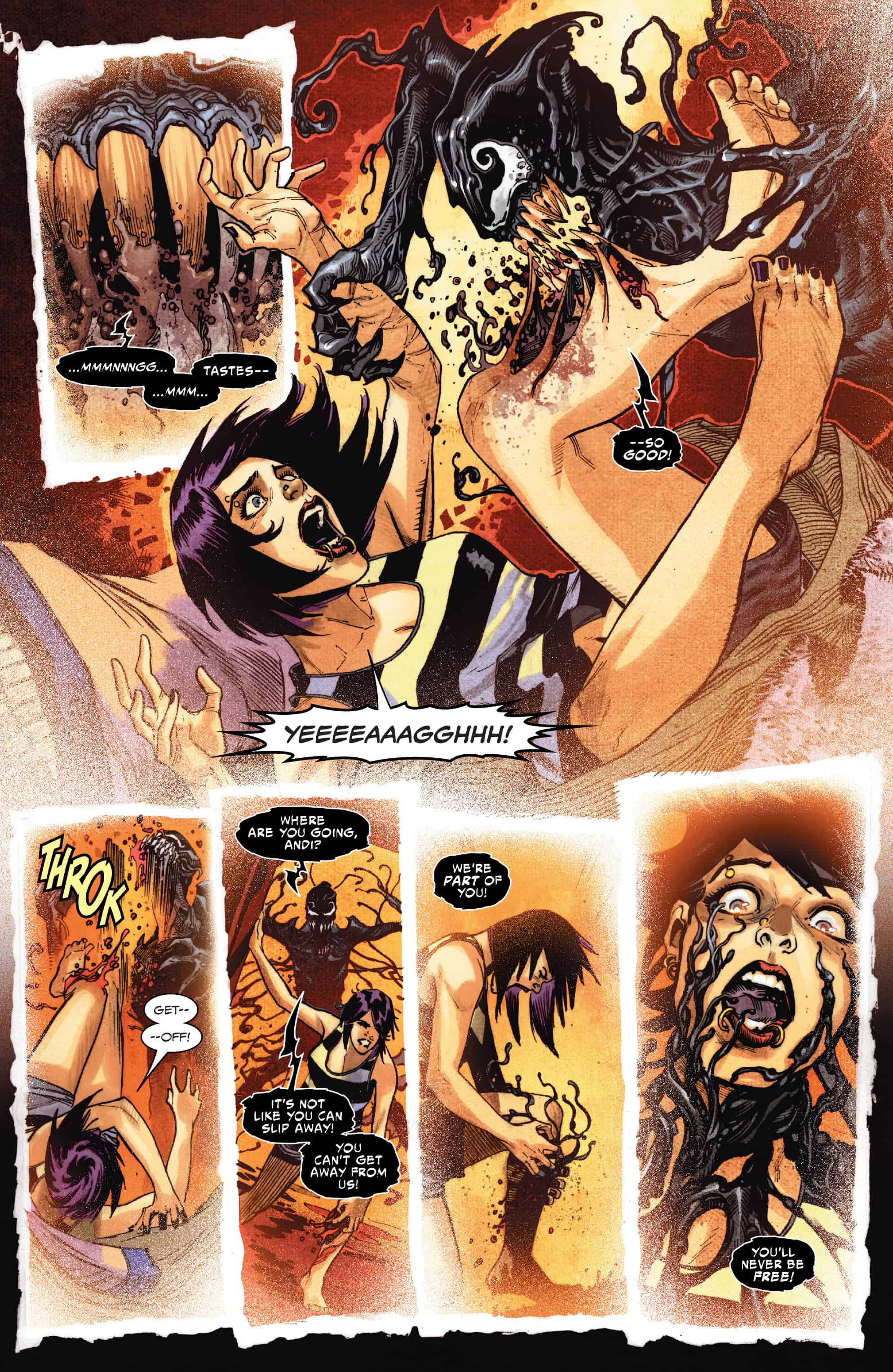 This is a great issue that definitely ramps up the anticipation for next month’s Absolute Carnage. It was awesome finally getting some legit Carnage action after literally MONTHS of buildup, it seems like this is intended as a primer for what looks to be an action-packed event! I appreciated finally seeing someone fighting back rather than just being sucked into the Cult of Carnage and I have a feeling a lot of the symbiote users aren’t making it out alive in what could prove to be a hell of a continuity cleanup. With the addition of Venom’s spawn at the end of Mike Costa’s run (see Venom: First Host for more on that) there’s got to be 7-12 dedicated symbiote users on 616 Earth and another 40-50 heroes who have been touched in one way or another (see stuff like Carnage USA and Venom Inc. for some of those shenanigans) and frankly, that’s too many. There was a time when Venom and Carnage felt special and unique and doing away with a lot of the symbiotes like Lasher, Scorn, Red Goblin and such might help bring that feeling back a bit. 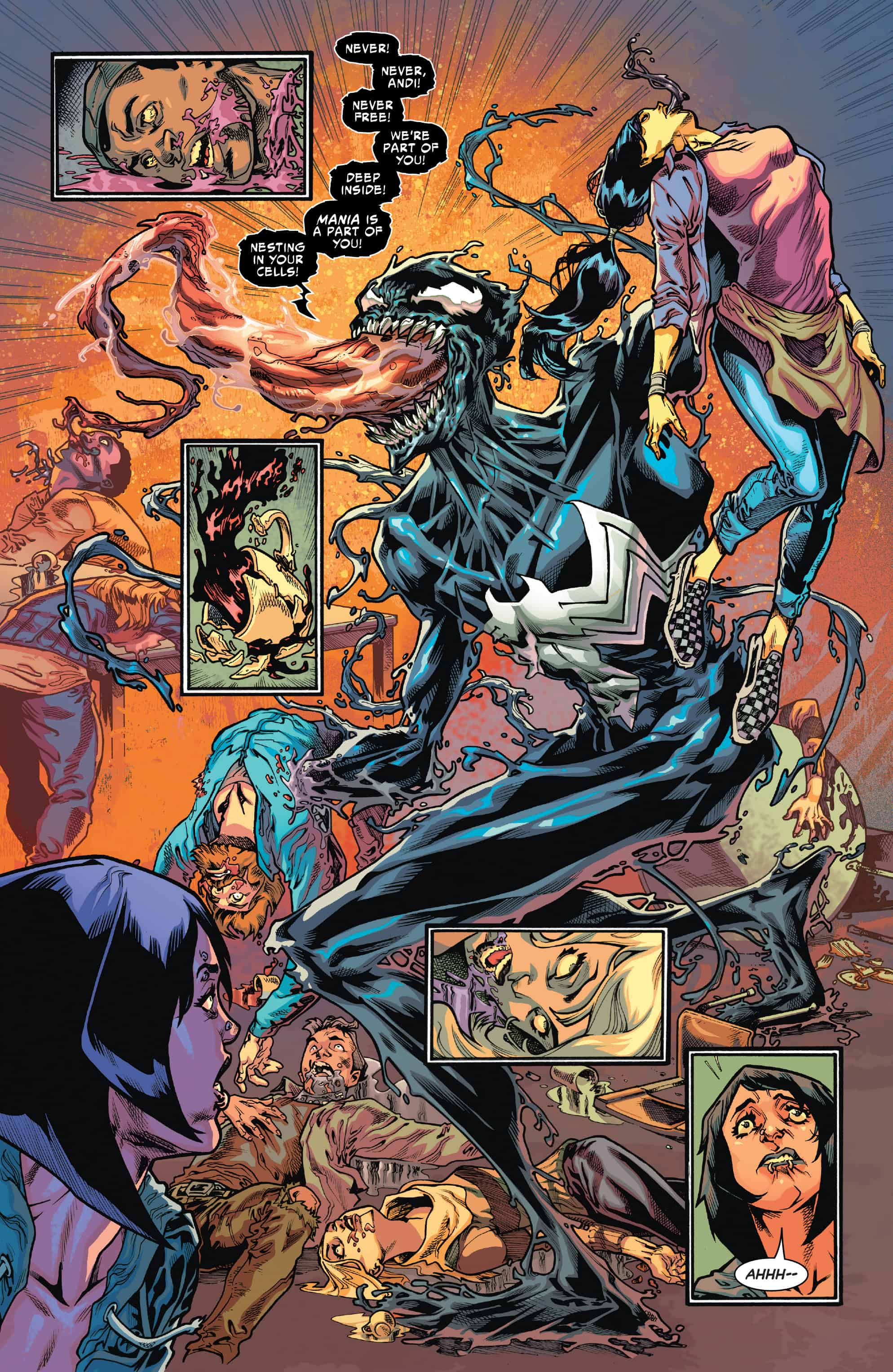 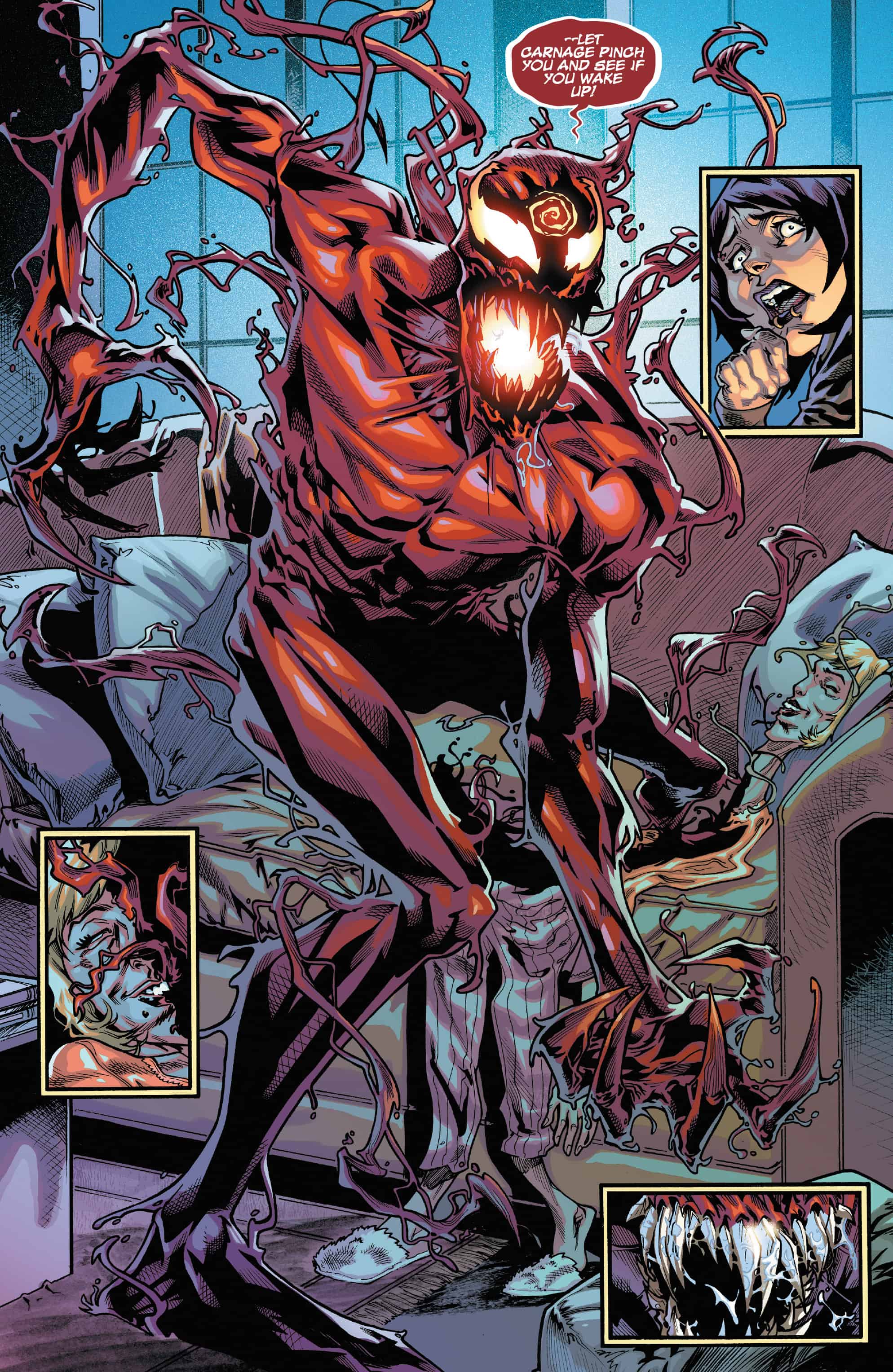 I very much liked the flow of this issue and thought it was a pretty breezy read, doing a good job of filling us in on who Mania is and what she’s all about in an entertaining way, then killing everyone she loves without trying to make every death some Uncle Ben moment. I loved seeing her powers and even just a glimpse of Flash Thompson/ Agent Venom made me happy.

Speaking of Flash, an as of yet unrevealed hooded figure stalked Maddie for most of the issue, but mysteriously disappeared shortly before Carnage arrived. A casual reader might think it was Carnage in disguise but when has Carnage ever seen his target and not instantly gone in for the kill? Cletus is cruel and only uses subterfuge in order to twist the knife a bit deeper before killing he wouldn’t follow a target. My first guess is a resurrected Flash Thompson (he was merged with Antivenom when he died, Antivenom has healing properties) has maybe resumed as Agent Antivenom and was covertly keeping an eye in his former pupil. It just makes complete and obvious sense to me. Other options are Kaine or Reilly (both MIA since Scarlet Spider ended… I think?) or maybe some Spiderverse remnant who actually knows at this point. I do, it’s Flash. 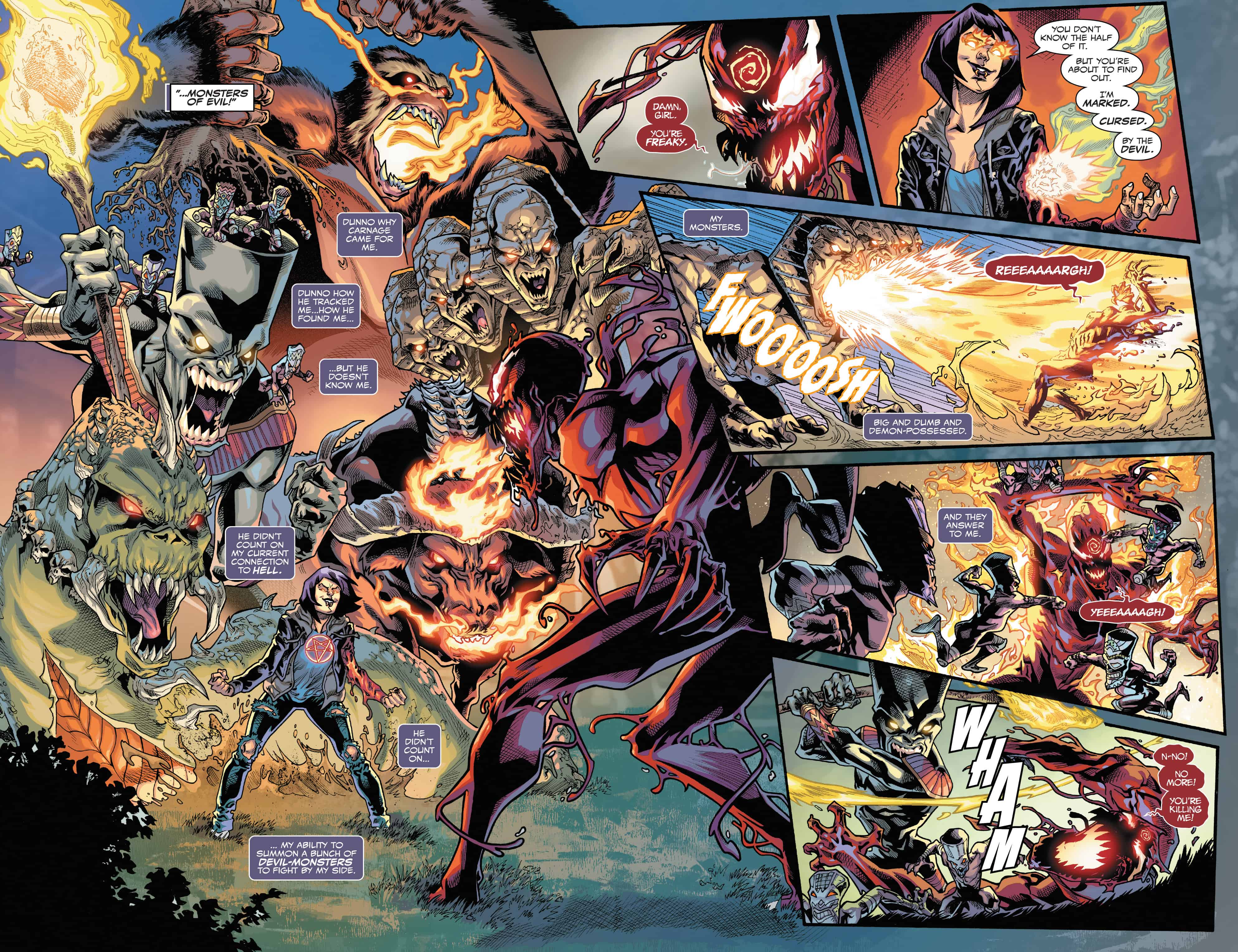 The art in this issue by Joshua Cassara and Alberto Alburquerque (Cassara did the awesome opening dream sequence) was great, although Carnage’s character design has varied wildly between these one shots and the previews I see Stegman posting, which worries me with the number of tie ins this event has. I hate when character designs are blown off… Complaining over. The scenes with the aunt and the friends are a bit bleak color palette wise which seems intentional. It stays dark during the fight but it fits the subject matter better so it’s less noticeable. I love the splash of Carnage tossing all the enemies aside especially but I won’t show it you guys need to see it in person.

I’m glad that Carnage is finally killing the crap out of stuff and is done standing ominously in the background being intimidating but not doing much. So much of the action in the Carnage related Web of Venom stuff has been implied or off panel and it had gotten a little old.

I loved this issue though. Can’t wait for this event!

Some big time payoff in these Web of Venom one shots, I'm very excited for Absolute Carnage now!

Web of Venom: Funeral Pyre #1: Where the Action Is!