West Coast Avengers #8: What The Hell Are Vampires Doing Drinking In LA? 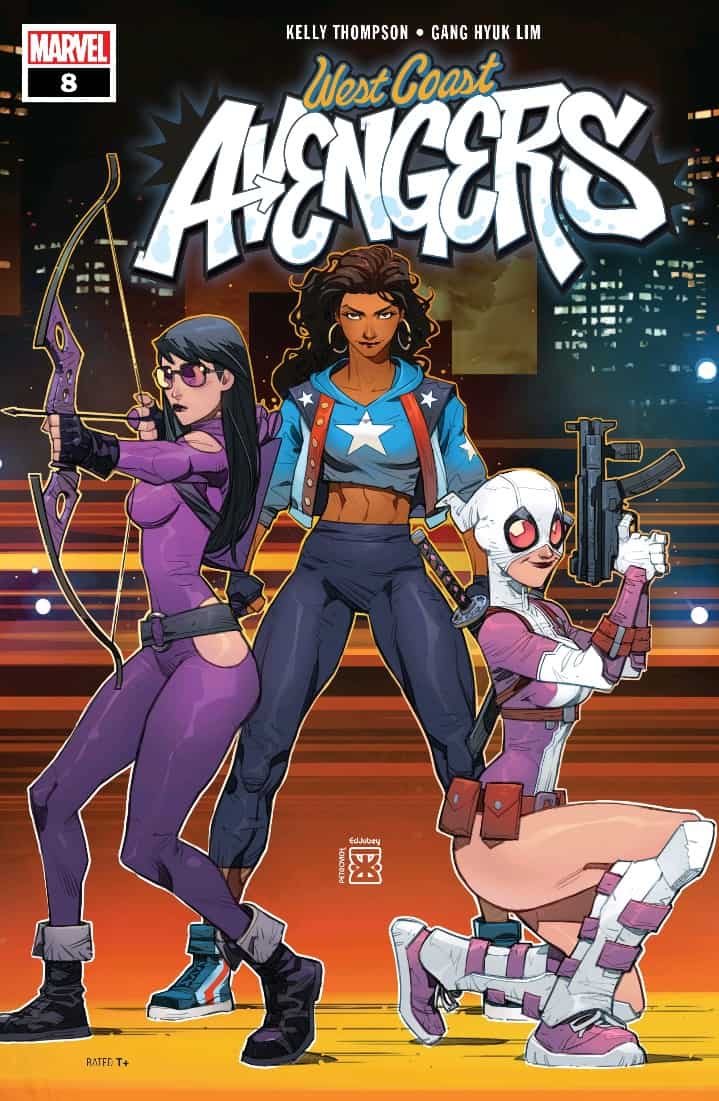 On Venice Beach, Gwenpool plays with Jeff the baby landshark, while America and Ramone continue to irritate comicsgaters by daring to not exist.

At HQ Noh-Varr is failing to explain his convoluted conspiracy theories to a groggy Kate. The team eventually agree to check it out, though Ramone is still fretting about her brother’s safety. 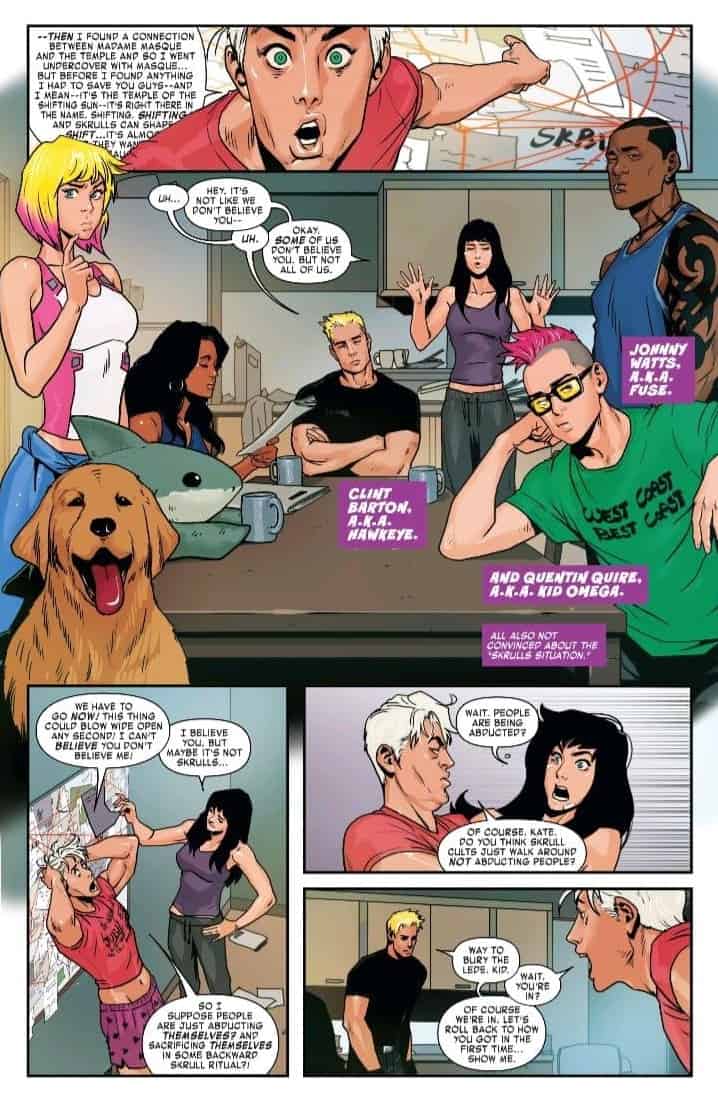 Clint enters the Temple of the Shifting Sun disguised as Wonder Man. Kate, America and Johnny sign up as regular civilians but are led downstairs… 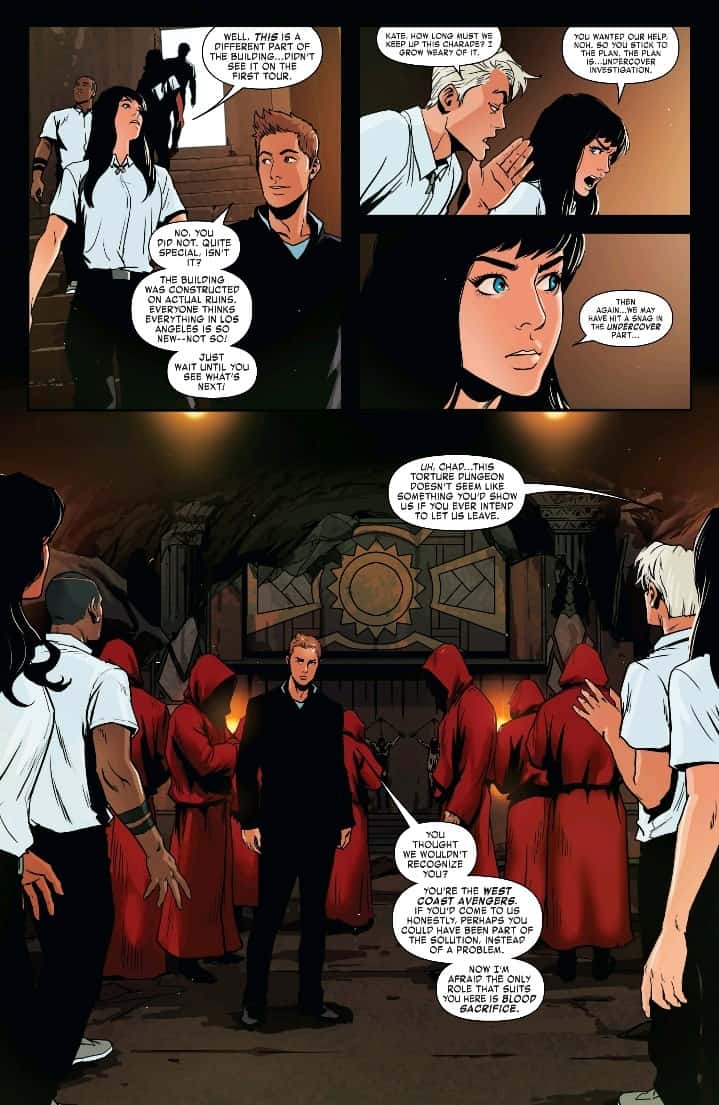 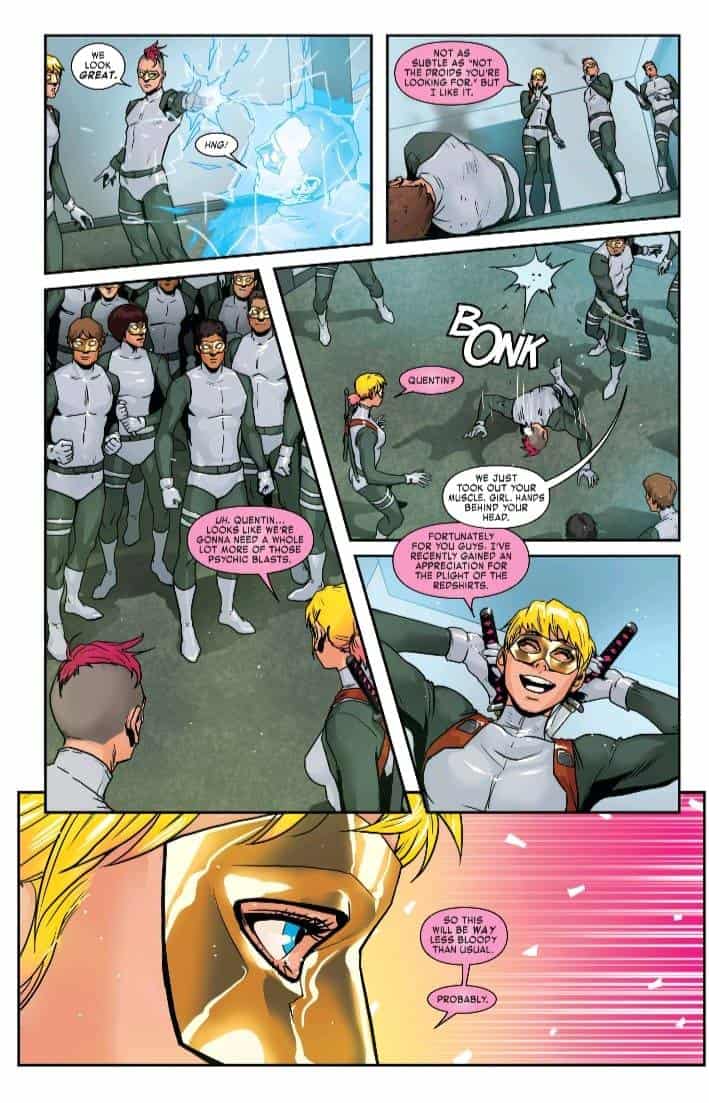 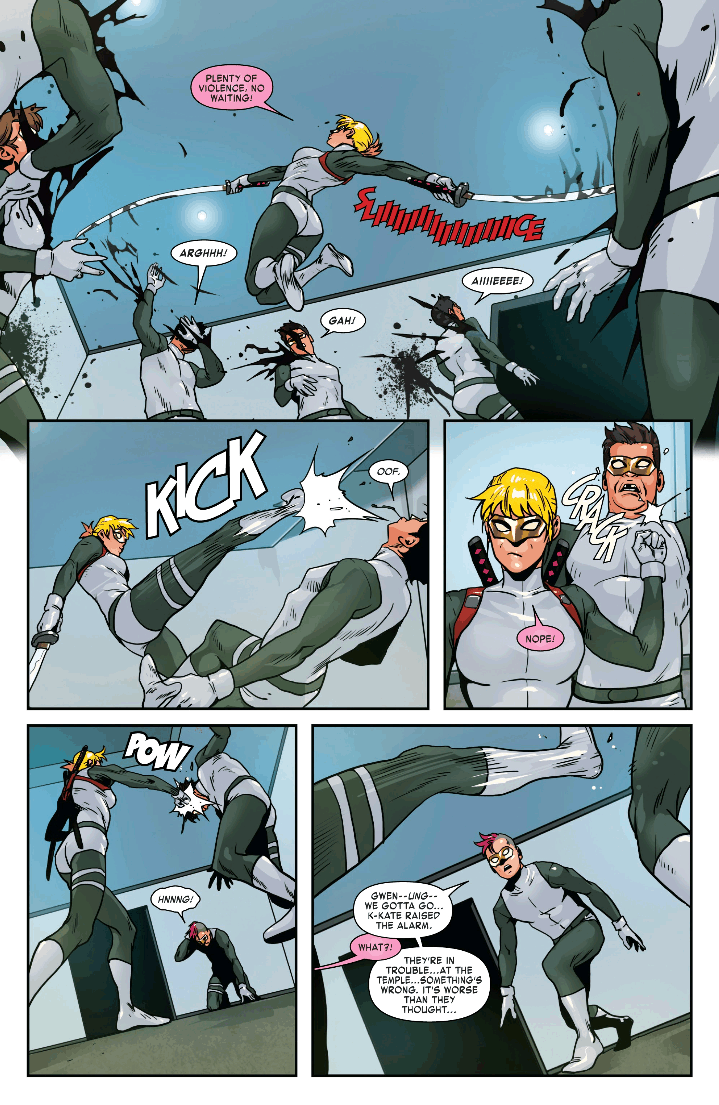 Kate’s mother removes her mask and offers her assistance. Meanwhile at the temple things go from bad to worse… 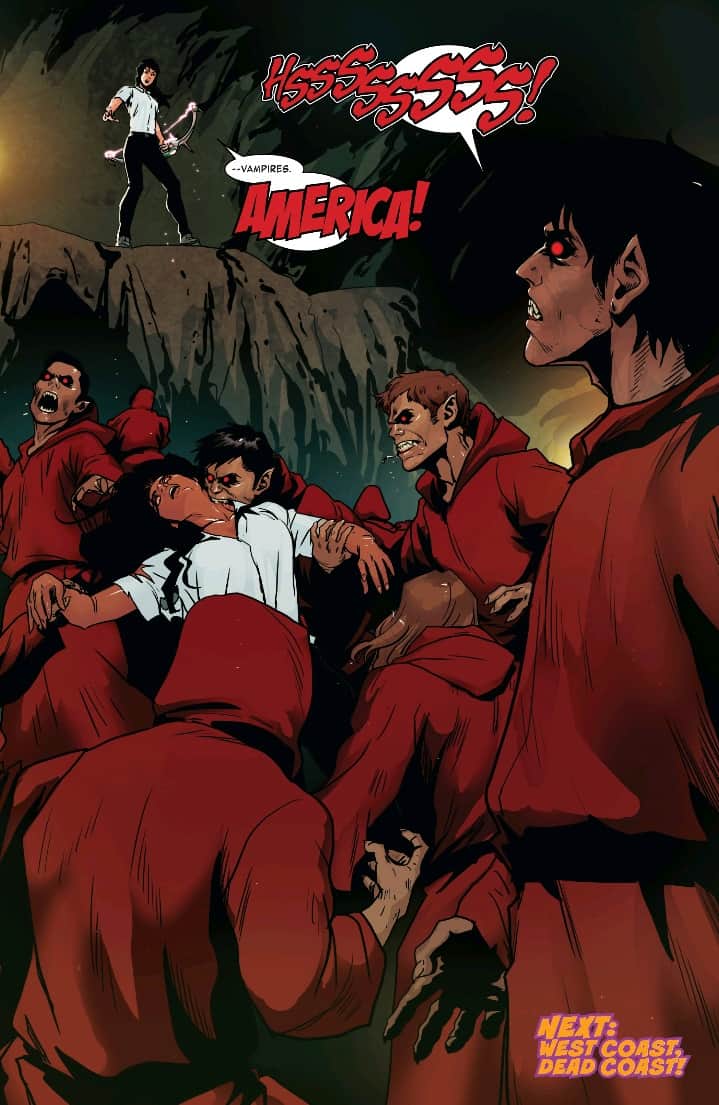 It’s not a funny issue, but it’s not relentlessly trying to be as it was early on in the series. Instead what we’ve got here is a fair bit of setup followed by a lot of violence. This series discarded its impact-less action a while ago but it really ups the ante here. Gwenpool painting the walls with henchmen was a shocking shift in tone. 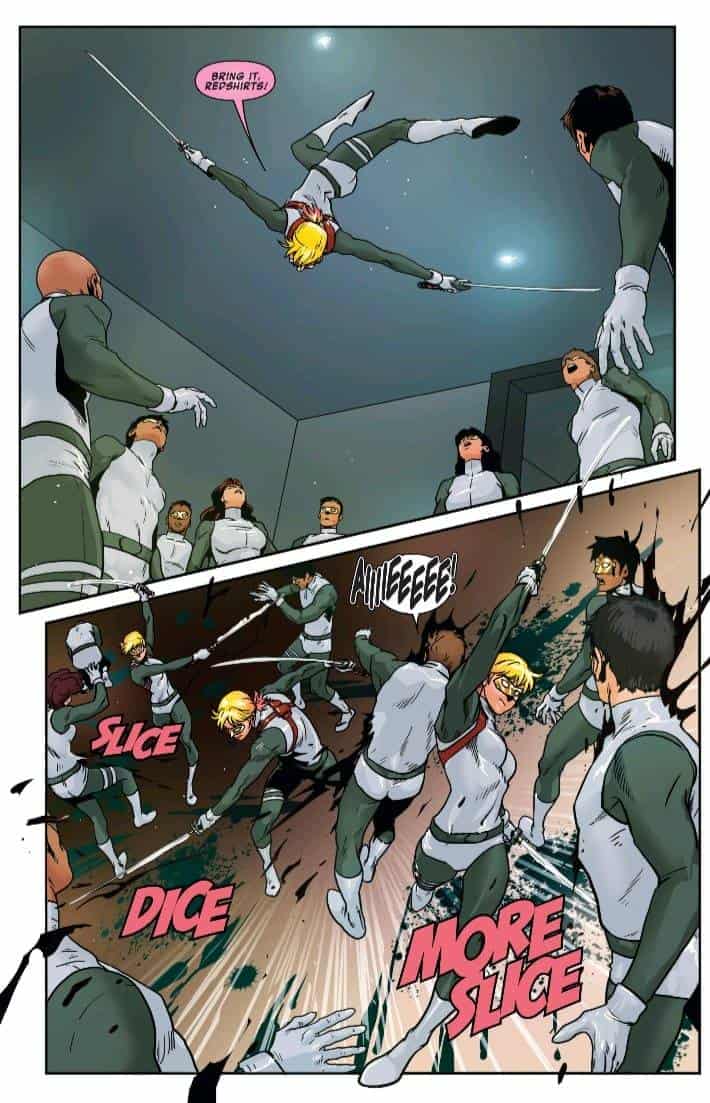 That being said it’s not the most visually spectacular issue, especially in terms of the coloring, there’s an awful lot of grey so I was glad to see the red hoods return at the end.

The art style is significantly different under Gang Hyuk Lim. There seems to be more exaggerated gender dimorphism in this issue. This means that America Chavez, the most physically powerful character in the book, no longer looks the part, which isn’t great. This is especially odd given how stacked she is on Eduard Petrovich’s cover. And while we’re on changes to character design, Ramone seems to have lost 20 pounds since she became a love interest, what’s up with that? (He asked rhetorically.) It’s almost as if her relationship with America wasn’t considered plausible if she didn’t completely conform to a conventional view of attractiveness. On the other side the most meaningful beneficiary is Johnny who is much more masculine now, less of a wide eyed fish out of water. It’ll be interesting to see if this plays into how he’s written in the next two issues. As you’re reading this you’ll probably know that I’m referencing the fact that West Coast Avengers will be canceled after its tenth issue. I can’t honestly say I’m that surprised or really disappointed. I like the team (especially America Chavez, who I’ll be keeping tabs on going forward) and there have been high points, especially issues 3 and 7, but the series has been a bit uneven and ultimately I don’t really care for this kind of candy floss light entertainment. It’s not consistently funny enough to be considered a true comedy, it’s rarely dramatic and the action has waxed and waned. A lot of hard work goes into making comics and even when it’s good I can’t help feeling that this series is less than the sum of its parts because really, what does it add up to? What does it achieve?

A solid balance of setup and action but neither the art or the writing are good enough to justify a purchase.

West Coast Avengers #8: What The Hell Are Vampires Doing Drinking In LA?