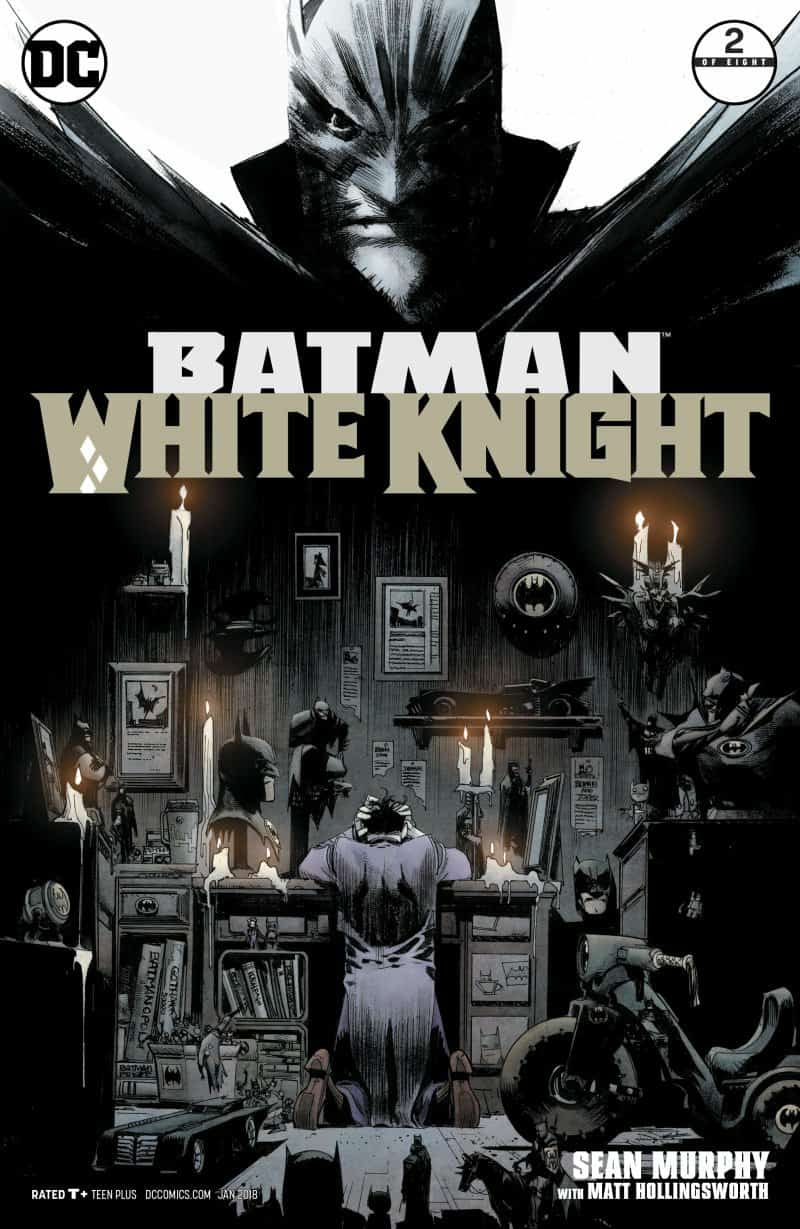 Harley Quinn makes a very unique entrance to Joker’s new Gotham in this bizarre second issue. While Batman is still trying to figure out what to do about the newly found intelligence of The Joker now calling himself Jack Napier, Jack starts trying to prove himself as the new hero of Gotham by claiming he will save the city no matter what the cost! Has Jack really turned over a new leaf, or is this just another attempt of The Joker’s to take down The Batman?

What You Need to Know:
After finding out his faithful Butler and longtime best friend Alfred Pennyworth is dying Bruce Wayne becomes unstable in this exhilarating second issue of a very new kind of Batman Elseworlds story. When Batman Catches up to the Joker during a classic cat and mouse chase he shoves unknown drugs down Joker’s throat causing him to become a lucid super genius. As Joker starts to sway the opinions of the people of Gotham, Bruce works with Mr. Freeze to find a cure for Alfred, and can’t seem to focus on the rising problem of his beloved city turning against him.

Joker A.K.A. Jack Napier starts planning a new era for Gotham City while his nemesis is nowhere to be found. Becoming the hero of Gotham through media interviews and motivational and inspiring speeches, it’s as though Jack Napier is truly no longer The Clown Prince of Crime as we knew him.

What You’ll Find Out:
This issue opens up to Jack Napier stating his case to a judge and jury, he says that the GCPD locked him up with little evidence and kept him locked up for the interests of the Gotham elites. Swaying public opinion Jack goes on to claim that the “Gatekeepers” of Gotham kept him locked up even with little evidence of anything more than a bank robbery. Jack states this helped the Gotham higher-ups build Arkham Asylum and keep their criminals on a short leash because Crime is the most profitable business in Gotham.

When Jack leaves the courthouse, successfully changing the public’s opinion about him and the Gotham elites, he finds himself in a familiar place with a gloomy shot of a rundown jokes shop, but before he can walk in he’s surprised by an old friend. None other than Harley Quinn in her “New 52” outfit is waiting outside the joke shop for Jack to finally pop back up. As Harley tries to put Jack’s makeup back on and get him to go out and commit crimes like the old days Jack stops her in her tracks and does the unthinkable, he proposes? 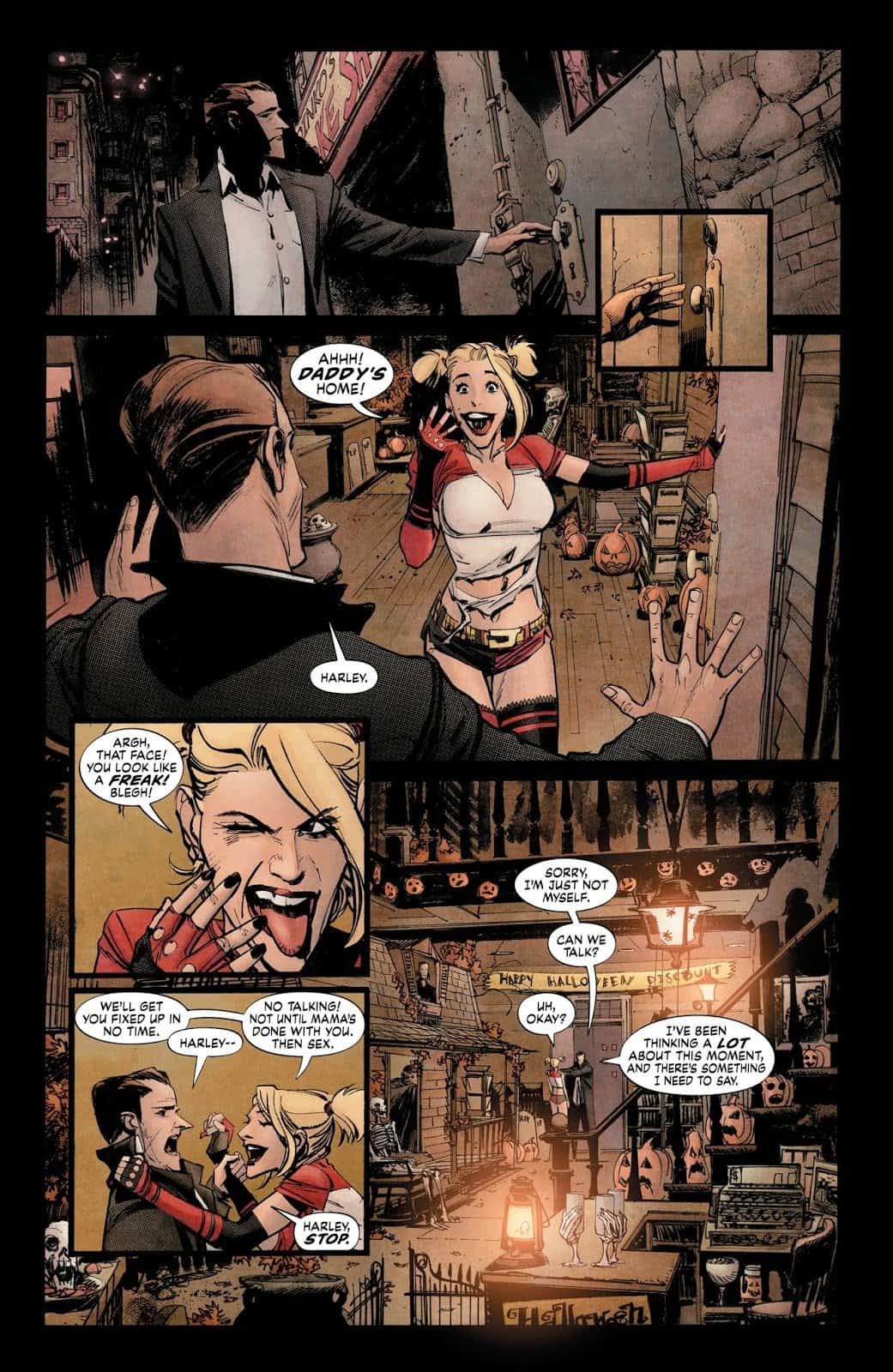 That’s right The Joker himself drops to one knee and proposed to the once lucid psychiatrist. Although he seems very sincere Harley looks at him like he’s crazier than the Joker ever was, and after Jack mumbles just one “puddin” Harley goes on a rampage leaping on Jack and attempting to beat the mess out of him only to be drop kicked by, another Harley Quinn!? Yes, you read that right, a more classic version of Harley in her classic red and black jester outfit pops out of nowhere and knocks out her contemporary doppelgänger. 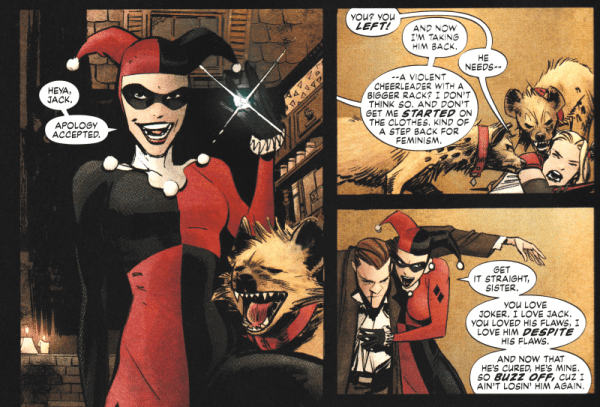 Confused, Jack tries to figure out the situation. Harley claims at some point she couldn’t take The Joker’s obsession with Batman, and after finding the caped crusaders colorful sidekick locked up and half beaten to death (a great nod to death in the family) Harley decides she must leave the Joker’s side. She decided to replace herself with a different Harley knowing Joker would have never noticed the difference.

Meanwhile, The Batman, Batgirl and Mr. Freeze continue to work on a cure for both Nora and the bed ridden Alfred. When they test a new formula on a couple more in what seems to be a successful test, Freeze decides that he needs to work fast to save Nora and tells Bruce to leave, but after a comment about his father Bruce punches freeze so hard he breaks his helmet causing his body to rapidly age to catch up with his actual age.

Bruce later arrives at what looks to be a Gotham elite charity event. Talking with some of the higher ups Bruce sees the news is talking to Jack and Harleen both. As Jack goes on about how Batman is nothing but a pawn in the elites game of flipping low income property, Bruce overhears a guest say that this is true, and that they all cash in on Batman fighting the criminals of Gotham in low income parts of town. Just so they can flip the buildings within those areas, Bruce loses it and starts to knock out every elite in arms length, and leaves the party.

Jack and Harleen then set up a meeting with all of the Gotham Rogues presenting a plan to work together and take down The Batman once and for all. As we get a few grizzly shots of different Batman villains someone notices a missing Clayface. Lo and behold Jack knew this plan wouldn’t be well received by the Gotham Villains, so he stole Mad Hatter’s hat, turned Clayface into small doses of sand that he then slipped into the drinks at this meeting, giving him and Harleen control over every villain in Gotham. So, is this a plan to get rid of all the villains of Gotham so he can be seen as a true hero of Gotham? Or is this just another plot to take control of the city and take down Batman? These compelling questions will hopefully see answers later on in this 8-part mini series.

What Just Happened?
Sean Murphy delivers another Easter egg filled issue of Batman: White Knight that I feel will split some Harley fans down the middle. While I’m a fan of the turn Harley has taken in some of the new 52 titles I understand some fans see it as a complete overhaul of a very compelling, fun and complex character. When Harley got her contemporary makeover through the new 52 she left the Joker to become a more independent character (or to become a member of suicide squad) with her own solo title and many other books showing off her newly found independence she became her own standalone character that to some don’t feel like the Harley Quinn we first met in the Batman animated series. So while I feel both versions deserve to have a place in the DCU somewhere, it was pretty awesome to see both versions show up and see the original triumph. Although I found the attitudes of these Harley’s to be swapped from how they were in history, I felt like the Jester outfit Harley would be the crazier clown with the classic Stockholm’s Syndrome while the contemporary version would be the saner version. So although I understand the whole altercation I feel it just wasn’t executed quite right, but that’s all neither here nor there.

Jack once again delivers phenomenal dialogue that keeps you waiting for more every time he’s in a panel. Nonetheless Harley also delivers some great lines, and reading her reminisce about Joker killing Jason Todd’s Robin was almost just as intense as reading Death in the Family all over again.

Bruce seems to be hanging on a very thin thread of sanity while Alfred is sick. Every time someone says something about Jack, Batman or Alfred he replies with either very little or a fist to the face. Which is interesting because normally Bruce is very good at keeping his feelings bottled up when wearing his Playboy philanthropist alter-ego.

The art is once again some of the best I’ve seen this year, Sean’s unique style would fit very well with any Victorian setting and Gotham is no exception. The eerie blues and bloody reds keep the flashbacks and main story set apart, although I’m still confused what happened to Jack and Batmans initial meeting from the first issue, I’m guessing we are building up the that moment when Jack finally has to ask Bats for help, I just wonder when in the story that event will actually take place.

I also can’t say I was a big fan of the final scene. It seems like this is slowly turning out to be just another Joker plot to discredit Batman and rule the criminal underworld. I’m hoping to see it go in another direction if DC is to keep their word and keep to their advertisement of “Joker is the hero and Batman is the villain”.

Rating: 8/10
Final Thoughts: This second issue just shows how well Sean Murphy knows the history of Batman, with the use of all kinds of storylines and different medias (IE: Batman animated series) it’s great to see all the different versions of Gotham and it’s characters, and Sean has used all these variations very well in one concrete story. I always like to see Bruce mingling with the elites, and this issue truly shows how out of place he is in that setting. Although I wasn’t a huge fan of the Harley reveal I can see where most fans were eager to see a classic take on Harley finally make it back to the comic book world. This series has started off as a unique and compelling new type of Batman story that if done right could become an instant classic, but if done wrong could sit as just another Batman vs. Joker story, and no one wants that.

Wolverine Switchback: You Know What Your Problem Is?
May 24, 2020