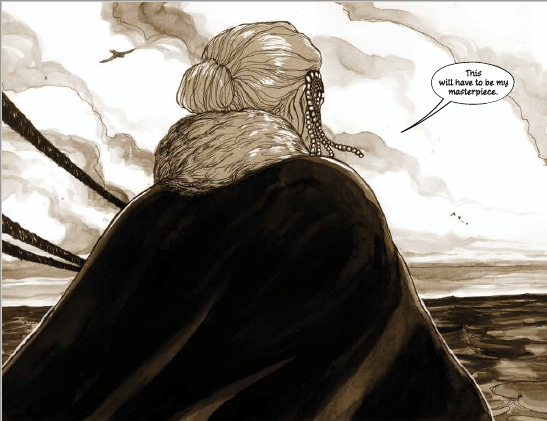 A brief look into another Pantheon of old, we see the discord that lead to four gods sitting around a table as it was in the very beginning. 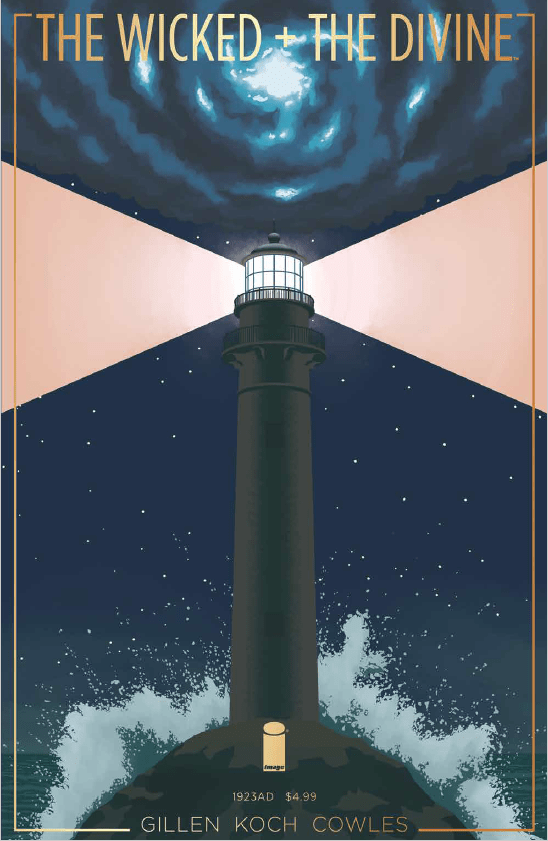 Every ninety years, the gods come back as young people. They are loved. They are hated. In two years they are dead.

In 1923 they have come back as artists. Although we know from the first issue their demise at the hands of each other is assured, we never knew the full story. 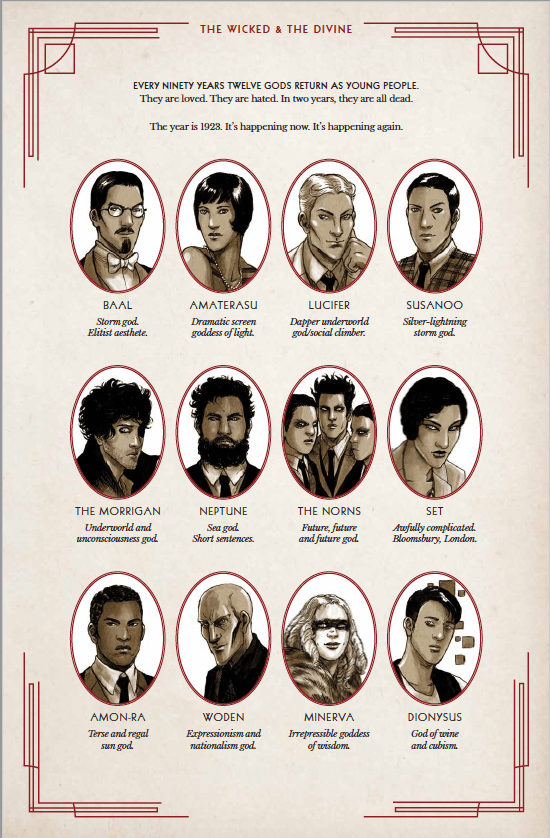 Taking a bit of a detour from the normal comic medium, much of the issue is written in prose. Opening on a brief bit of sequential art, we see that as the two years is drawing to a close, Ananke has been put in the position with all of the gods alive. Believing this will be tough, she surmises that this current act must be her masterpiece.

The chapter begins as the gods arrive on a call from Lucifer. He has invited the Pantheon to join him at his new mansion built on a secluded island. There, he wants them to gather to celebrate art and the end of their days. As the Pantheon arrives, many parallels between the gods of 1923 and that of 2014 are drawn. Love triangles, bitter rivalries, outcasts; 1923’s Pantheon has them all. Upon everyone settling into their room, the murder mystery begins as Lucifer is the first to be killed.

Shaken, the rest of the Pantheon tries to discover who the murderer might be. Distrust is quickly sewn between the Pantheon as accusations fly. A few quick alliances are established while others try desperately to figure out the reason someone might want Lucifer dead. Dionysus has a vision of another world war and the awful things that it could lead to. Distressed, Dionysus is taken to bed by Neptune, the only god to sympathize with his struggle. Shortly after, Dio is found dead by means of the electronic projection system Lucifer had installed in the mansion.

The Pantheon decides the buddy system is the only way to keep themselves either safe or informed as to who the killer might be. Deciding the electronics in the mansion will be dangerous, they decide to shut them off until they can figure out who has killed Lucifer and Dio. Woden expresses his admiration for the Nazi party and takes Baal into the viewing room. The others set off to be entertained by Amaterasu’s light sculptures. As the Norns decide to investigate further, Ananke notices that outside a body has washed up on shore. Neptune is found dead, body beat against the rocks.

After the Norns have figured out who is behind the whole thing, they decide to inform Ananke, thinking her innocent since she was with them at the time of the previous murder. As his rationale comes to its climax, Baal, Set, and Woden stroll in, confessing to the conspiracy. Giving their reasoning for the treason as starting the next world war, Skuld and Urðr side with the conspirators, and decide Verðandi will be the next god to die for their cause.

Minerva, having seen the confession and latest murder, runs to Amaterasu, Susanoo, and Amon-Ra to reveal what she has discovered and to devise a plan to stop them. Minerva also confesses that The Morrigan wanted to be alone, so she left his side. In a tower high above the sea, The Morrigan utters a prophecy and is quickly killed by Ananke. Ananke screams murder as the others rush in, and realize the lighthouse on the adjacent island has lit up with whatever plan the conspirators have to reach their goal. Minerva, Amon-Ra, Amaterasu, and Susanoo set off to try to stop their plot.

Set, Baal, Woden, and the remaining Norns set up a machine at the top of the lighthouse, but Woden is lost to a giant flash of light upon starting up the machine. In true Wicked and Divine fashion, what this machine really does is never clear. But when the light gods and Minerva arrive, the conspirators reveal their plan to thin out mankind as they are tainting art. Their elitist attitude has led them to believe that only high art is worth sharing with people and that humanity has fallen too far from grace to continue.  A fight ensues and the conspirators are killed by one of Amaterasu’s light sculptures, all except Set, who Minerva takes it upon herself to finish off.

After returning to Lucifer’s island and the pagoda out back with the roundtable of the gods, Ananke enters and apologizes that she allowed something so vicious to happen. She feigns as if her oversight allowed this tragedy. She leaves to a secret cavern below where Woden is hiding. Believing his true mission is to spark the next world war, he is betrayed by Ananke while admiring their “work.” Ananke kills Woden and returns to the pagoda with the remaining gods. There the scene returns to the suicide pact written in issue #1. 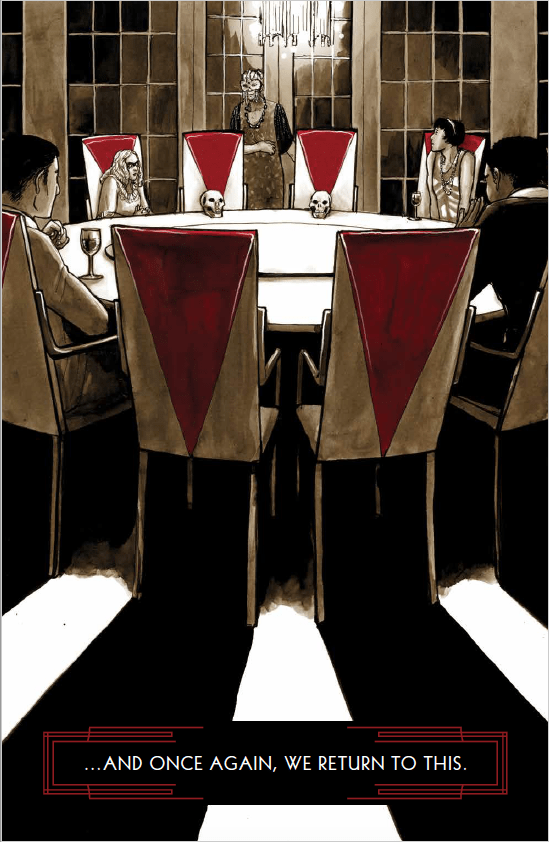 1923 gives a great parallel to the current day Pantheon without giving away too much of the story. Set like a murder mystery written in the year in which it takes place, the reader is thrown into a world through the written word that is lavish, extravagant, and excessive. While these themes are not new to the Wicked and Divine series, they are given new meaning in their current timeframe. 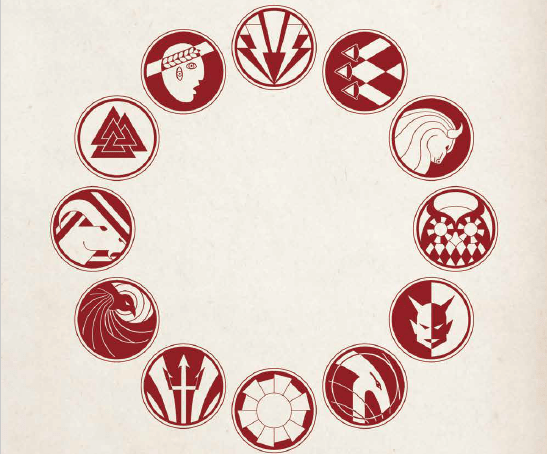 A condensed version of a murder mystery is a fun choice for the one-shot issue. While the series has always had an overarching mystery element to it, having it in a more concentrated form propels the reader forward through to the next chapter. The interludes at the end of each chapter with sequentials by Aud Koch help fill in the visual representation of the world.

Aud’s art is brilliantly suited to the situation and time period in which it takes place. Wonderfully rendering the world and bringing a sepia tone flashback effect helps pull the reader into the lush exuberance characterized by the era and current Pantheon. Koch has also made a bold choice in the coloring. With sepia colored tones filling the page, the red of blood is a stark contrast. The death of each of the gods is radiant as a result of the splash of color. 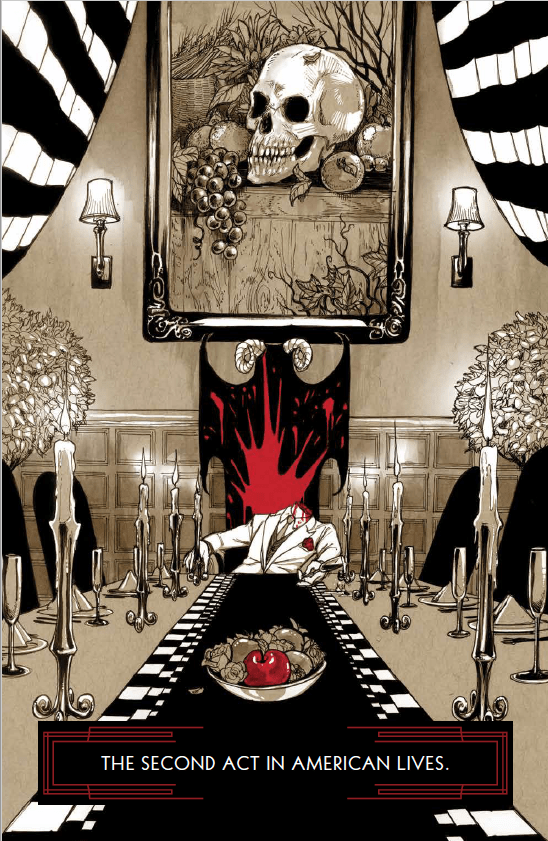 The whole thing imbibes the spirit of the Wicked and Divine franchise while also impressing its own complete and stand-alone story. The love triangles, the drama, the betrayal, the fun, the sexiness; it’s all here. And even with all these things, it settles into its own time period while making the gods feel equally as progressive as the gods of 2014’s Pantheon. It’s always fun when Gillen decides to play with the mythos of the series and proves that he has the story so tightly nailed down that even a one shot in a different time period can feel like home.

Final Thoughts:  A playful mystery style novel plays out as the gods of the 1923 Pantheon uncover a conspiracy. The arrogance of the gods is overshadowed by the overarching head of the chaos, Ananke, as she manipulates the gods like puppets to enact one of her masterful plans. Still leaving plenty of questions, the one-shot feels as fun and sexy as its main series counterpart.