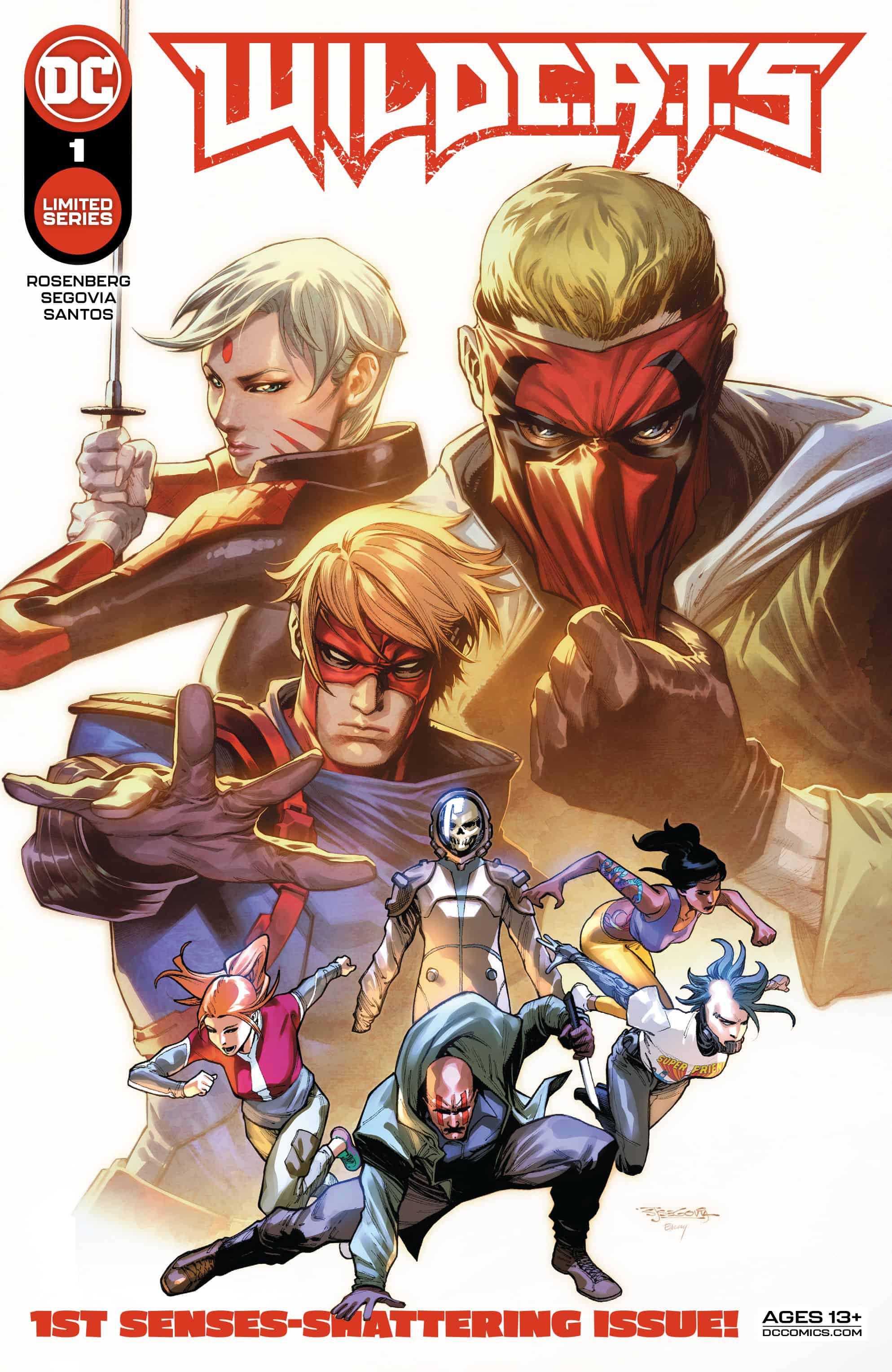 Spinning off from the pages of Batman Unlimited comes a senses-shattering new series! The HALO Corporation has gathered a motley crew of operatives, led by Cole Grifter Cash, who are going to make the world a better place...no matter who they have to kill! Working in the shadows of the DC Universe, this new covert team has been tasked with gathering an elite group of scientists for the first phase of their plan...but the Cats' mysterious leader, Void, might have other plans!

FINALLY!!!! A real WildCATS, or WILDCATS, or Wildcats, book is back in print! It’s the WildCats 30th anniversary, and DC’s celebrating in grand style. Not since the beginning of the New 52 have we had a Wildcats book, and I’ve missed these characters so, so, sooooooooo much. WildStorm fans had a decent, and promising reboot a few years ago, by Warren Ellis and Jon Davis-Hunt, called the Wild Storm, that was steeped in hard science fiction, doused in paranoia and conspiracy theories, and a touch of gritty noir, that was successful enough to garner a 12 issue maxi, Michael Cray, by Ellis, Bryan Hill, and N. Steven Hill, that ended with the announcement for a new WildCats book by Ellis and Ramon Villalobos, that stalled before it even got started. Not until the Infinite Frontier, when we got some Midnighter backups in Action Comics, while Grifter joined the anthology title, Batman: Urban Legends, where Rosenberg started laying the groundwork for the book that we have before us. So let’s get to it, shall we?

Matthew Rosenberg has had some classic runs at Marvel, working on some high profile books, like the Return of Jean Grey, and was one of the three writers who helped relaunch the Uncanny X-Men book, before the current Krakoan era began, which had varying degrees of success and fanfare before moving over to DC, where he began planting the seeds for this run with his stories in the Batman: Urban Legends anthology book, and gave us a Grifter that hits some very…familiar notes, giving us a modernized Cole, that feels more like the Fraction/Aja Hawkguy, instead of a swashbuckling love child of 90’s Wolverine and Gambit. While most of the cast receive very little development in this issue, it’s a first issue and there’s always room for down the road.

One thing that popped out to me was the location. The team, which is mostly known for having their skyscraper in New York, has set up shop in the west coast version of Gotham, Star City. Star is the home of Green Arrow, the liberal superhero that was losing his fortune and going through an existential crisis decades before it became chic, while writers would slowly change Star City into the DC equivalent to Seattle, so Marlowe setting up shop here made a lot of sense. Unlike Gotham, Star City’s superhero population is rather limited to Arrow, Black Canary, and their very small supporting cast, so it’s a lot easier to build something here, in a city that has a history as far back as the Golden Age, but doesn’t have the level of development that a city like Metropolis or Gotham, giving Rosenberg some leeway to give this city some branding.

On art duties is Stephen Segovia, whose style really popped for me here. He’s given the Cats this almost ephemeral, and youthful feel, that evokes both those feelings of faithful nostalgia, with a more modern, and functional feel, because if there’s one thing you can be 100% sure of is, these characters were developed and launched in the 90’s, where style trumped substance Every. Single. Time. (Until Jim started bringing on veteran comic legends, Chris Claremont, James Robinson, and Alan Moore). Stephen’s gives us some looks that evokes the elements of their most iconic looks, while also giving us the superhero elements that were unfortunately lacking with the Ellis reboot.

There was a lot for me to like from this issue, unfortunately there were some things that just kept bugging me, with an overall feeling just kept leaving me unsatisfied. First was the almost complete focus on Cash. Yes, I’m fully aware that despite the development of Midnighter, Grifter is the cool, gritty guy that was the biggest douchebag in middle school that you hated, yet secretly had a crush on. He was the guy, but I’m not in elementary and middle school anymore, and my tastes and appetite has changed since then. Give us something to sink our teeth into. I know who Zealot is, but I got nothing here that reminded me of her. The same with Marlowe. He’s the cigar chomping’, swearing douchebag, (listen, it was the 90’s. There were a lot of douchebags), who’s also this super mega powerful alien who just so happens to be a trillionaire stuck in the body of a dwarf middle aged man. On top of that the censored dialogue started to grate. I get it. He likes to swear. Give us some meat on these bones. Another thing is they’re still on Earth Prime. DC has had a very hard time integrating the characters and storyline elements to the DCU, that even when we get DC stalwarts like Superman or the Justice League teaming up with the WildStorm characters, they don’t quite congeal smoothly.

Thirty years after the meteoric rise to the peak of comic stardom comes this all new series breathing life into this cast of characters that have been unfortunately shelved for the majority of the last decade. DC seems committed to making them work, especially since Jim Lee, the WildCats creator, is the current DC publisher. Rosenberg’s first issue has given us a taste of what to expect, but there’s something lacking here that just made it feel left behind, or an afterthought.