REVIEW: The Wild Storm #12 (Shot Heard ‘Round the World) 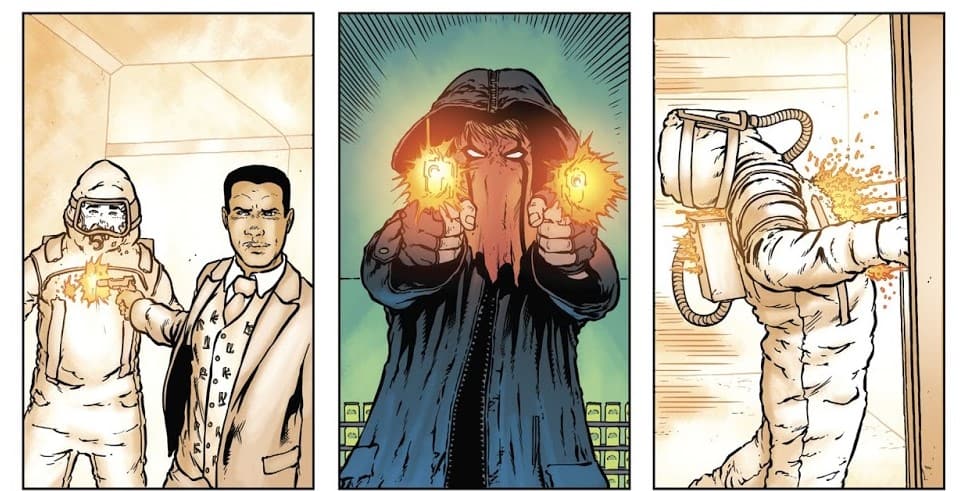 IO Analysis starts their mission to infiltrate Skywatch’s systems to gather intel for anything they can use to defend themselves. Marlowe’s team invades IO Hightower to destroy any intelligence they might have. 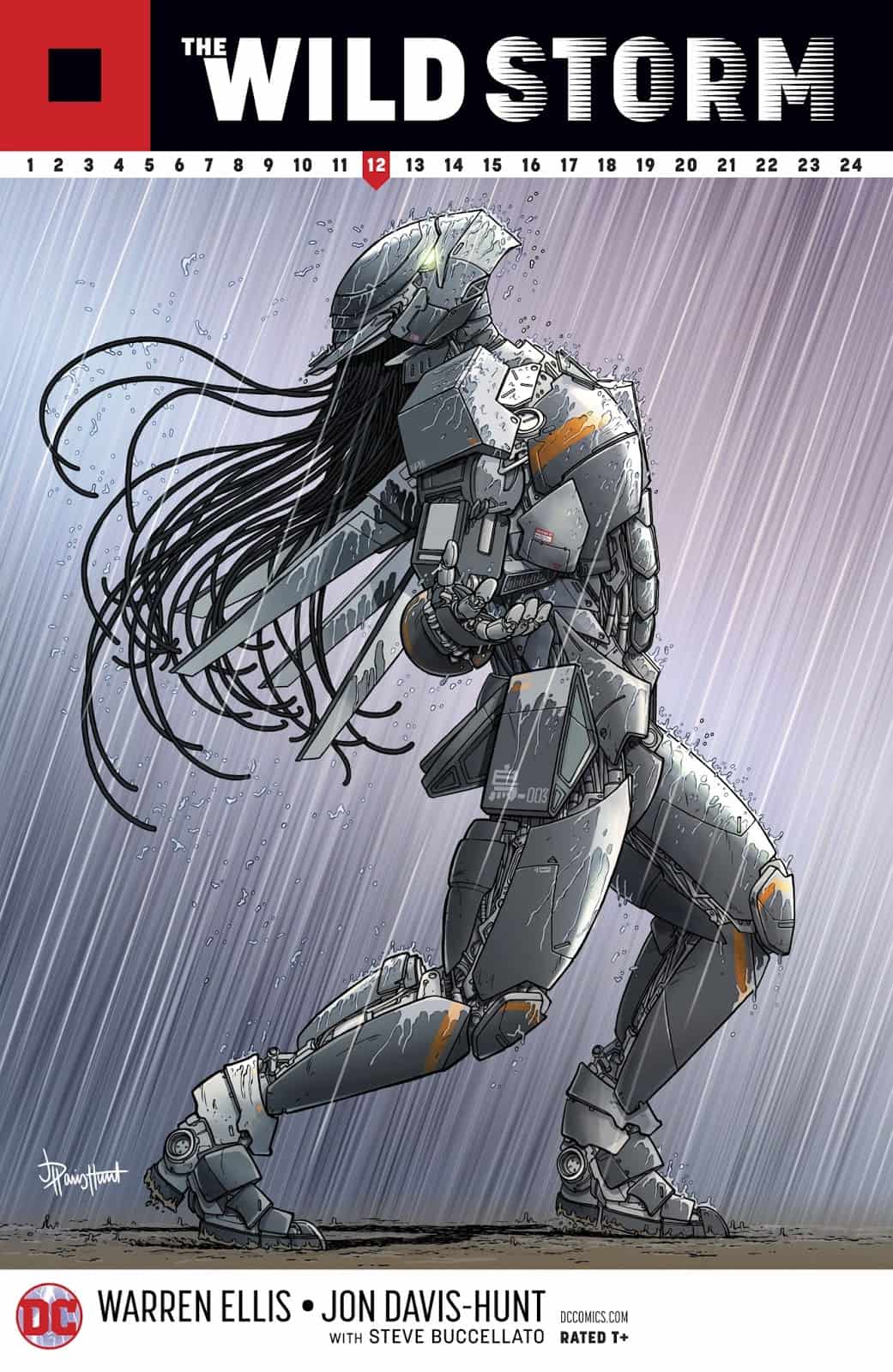 Angela Spica has used technology she has stolen from her former employer, International Operations (IO), to develop an exo-suit that can store itself under her skin. She uses this technology to save Jacob Marlowe, CEO of HALO, a company devoted to pushing the boundaries of technology for the modern world. But this single selfless moment has set into motion a chain of events that Angie could not even imagine.

International Operations is an organization masquerading as an American Intelligence bureau that actually runs the world. IO has sent an assassin, Michael Cray, to kill Jacob Marlowe. IO believes Marlowe’s technology is advancing too quickly and is economically destabilizing. Angie is quickly recognized as a low-level employee in the aftermath of her heroic save of the technocrat. Miles Craven, IO’s director, has set his sights on bringing in Angie dead or alive revealing the technology she used to create this suit was actually stolen from Skywatch, an organization that rules over space. The two organizations have a peace treaty, and this is a clear violation. Miles worries that if Skywatch finds out IO had these technologies and kept them hidden, it could mean war or much worse.

Jacob Marlowe decides to track Angie down and offer her safety. He sends his team to find her, leading to an incident involving one of IO’s CAT (Covert Action Team). IO’s CAT is killed by Marlowe’s team, and Angie escapes. Eventually, Adrianna, a former astronaut for Skywatch who was killed in a space “under our dimension” called “The Bleed” and brought back to life under mysterious circumstances, catches up with Angie and convinces her to join Marlowe’s team.

Jacklyn King, head of the Analysis division for IO, has found a lead on the mysterious team who has defended Angie from their Covert Action Team (CAT) operatives. Facial recognition has picked up Cole Cash as one of the rogue CAT members, but King finds records that indicate Cole Cash died two years ago but decides to look into it further. She has also ordered her assistant to develop a team to look into the possibility of taking data from Skywatch without them noticing.

Skywatch has recognized their technology has been reverse engineered and decides to use their agency on the ground, The Division, to look into the incident involving Angie and Jacob Marlowe. Lucy Blaze, their top investigator, has been put on the case.

Angie, demanding answers, scans Marlowe and finds that he, John Colt and Kenesha are not human. Jacob explains that they are aliens who were left on Earth after losing communications with their home planet, never revealing what their mission was. He decides to grant Angie access to his lab on the condition she dumps all data from the suit into his files, as he wants to know the range of IO’s intel. Getting comfortable with Marlowe’s team, Angie also agrees to give them specifications to technology she had created for their plan to invade IO Hightower. Kenesha, Cole, and John plan to use these devices to try another raid on IO Hightower to collect intel.

Jackie decides to look into the project in which Cole Cash died a little further and finds the paper file. Upon opening it, she sets off a device that appears to be old and dysfunctional, as it doesn’t destroy the file as intended. She assumes John Lynch, former director of IO, has left it there.

Cole, Kenesha, and John get ready to invade IO Hightower using the technology granted to them by Angie. They send Adrianna in first to deploy the drone, which activates a distress signal and forces the Hightower staff to evacuate.

Jackie returns from her digging in the archives to start the raid on Skywatch’s systems. After the approval from Craven, the mission starts, and they infiltrate Skywatch through a satellite, slowly pulling intel they might use against Skywatch in case they retaliate for their stolen technology.

John, Cole, and Kenesha infiltrate Hightower and, after a little resistance, hack into their systems and delete everything reported between IO and Skywatch, leaving them without their secrets. They enact the data dump and escape from Hightower without further complication.

Bendix is interrupted by Lauren with the news that the attack they are suffering seems to be from North Korea, just as IO had planned. But she also alerts Bendix she has Lucy on the phone. Lucy reveals that her investigation into IO has led her to hear a transmission from IO Analysis, and it implies the attack they are currently suffering is indeed being enacted by IO. Bendix, furious, orders Lucy to bring him a body for their crimes.

Back at IO, the attack from Cole and his team are noticed, and Jackie and Craven worry it may be Skywatch striking back, but continue with their information extraction. When they finish, they close down all systems, and although they lost everything from Hightower, they consider the mission a success. Craven orders Jackie to dig through what they’ve found, worried that he may need something on Bendix should they retaliate.

As they exit from the successful mission, Mitch, Jackie’s right-hand man, gets into his “Overshare” ride, driven by Lucy Blaze. Upon pulling away, Lucy turns into an alley, shoots Mitch in the head, and leaves the body behind as a warning.

Out in a snowy remote area, the former director, John Lynch, comes home to find that a warning that one of his files has been tampered with. He decides it’s time to make a visit to his former organization.

The first shots of the inevitable war have been fired. While the issues leading up to this have been a web getting us here, they have finally started to pay off as we reach the war between IO and Skywatch. Marlowe’s team as a third party intervener has only worsened the situation in a “wrong place, wrong time” sort of way. The writing for the series to date has slowly lead up to this in a masterful weaving of plot lines that intertwine each character’s role in the war to come.

Mitch’s appropriately named app, “Overshare” has made him the first bit of blood to be spilled in the oncoming war. The overdependence on technology theme was harder hit in previous issues, but its consequences have finally come about. Mitch’s carelessness not only got him killed, but his phone is the one that relayed the transmission to Lucy in which she heard the planned attack on Skywatch.

With the series now at its halfway mark, it’s not hard to see how the war between the two organizations will escalate. Leading into the full birth of the new Wild Storm universe, the tail half of the series is sure to see Bendix angrily retaliating at every given chance, and IO on the defensive while they try to find something to use against the technologically advanced organization.

Final Thoughts: The opening shots have truly been fired in the war that will lead to the rebirth of The Wild Storm universe. As the complicated web takes hold and makes fools of all characters, Ellis’ mastery of plot comes through. The best issue of the series to date combines action set in motion from the previous eleven issues.