The Elephant in the Room (Wildstorm #7 Comic Review) 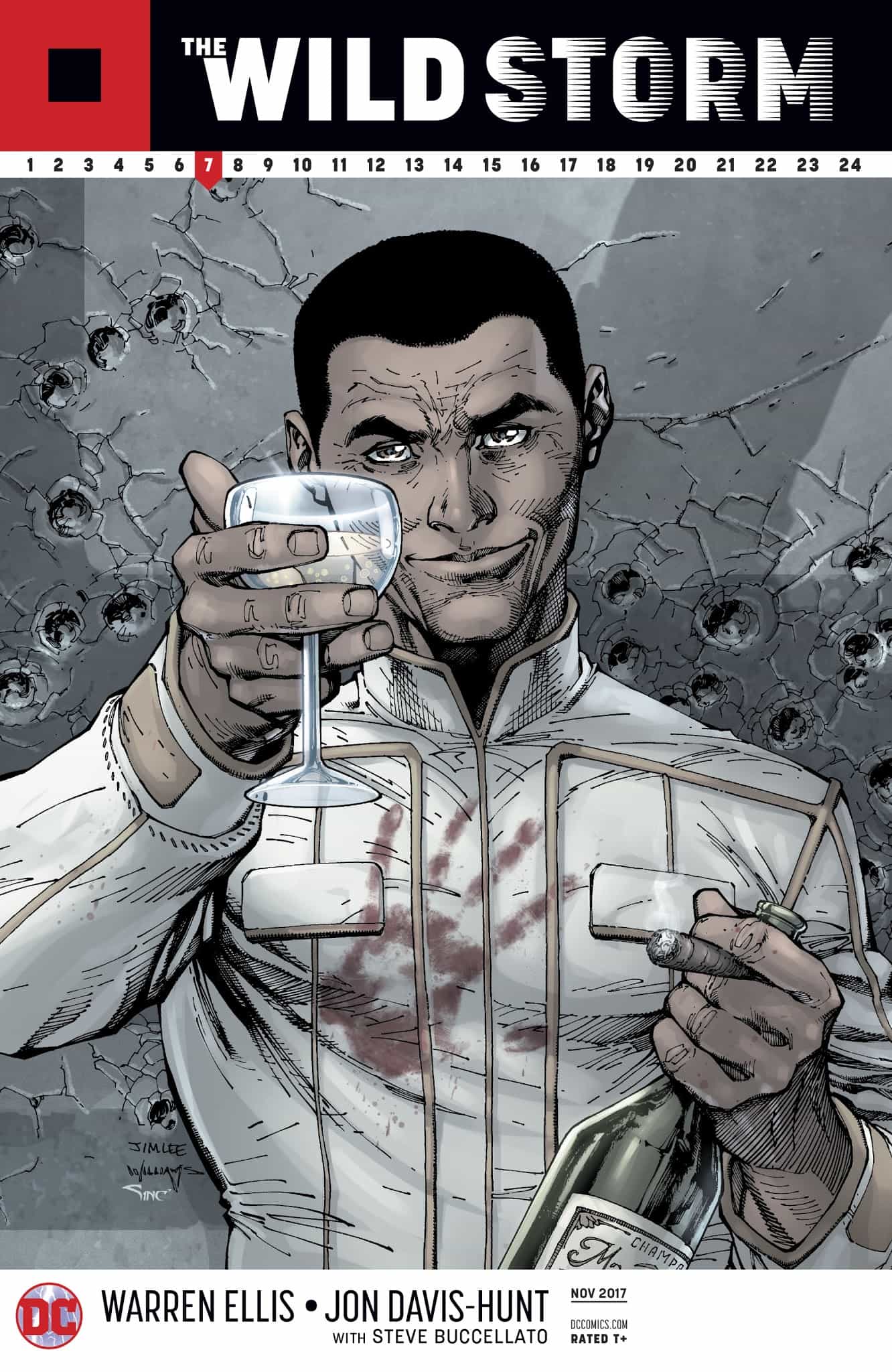 I.O. begins to mobilize and targets all the key players to regain control of a bad situation and salvage its already tenuous alliance with Skywatch. John Colt returns and Angie Spica decides it’s time for Marlowe to come clean about who, or rather what, he really is.

I.O. controls the earth while Skywatch rules space. Angie Spica threatens to destroy years of harmony and coexistence by revealing that I.O. been in possession of technology and deliberately concealed that knowledge for their own gains. Utilizing Skywatch technology in the form of a battle suit, Spica intervenes on an assassination attempt on HALO chief executive Jacob Marlowe and at the same time has put herself at the top of the everyone’s priority list.  Averting both kill and capture, she takes an offer of aid from Marlowe who offers her sanctuary.

I.O. is in full swing and has allocated all resources with dual aims of recovering Angie Spica and keeping their deceptive alliance with Skywatch intact. In order to do that they have one huge mess to clean up but despite their effort, each attempt is thwarted by Cole, Adrianna, and Kenesha.

John Colt was inserted into the I.O. organization to monitor it’s objectives and progress. Colt knows that I.O. is on to him but his appeal to Grifter to abort the charade are met with resistance. As he suspected, he is discovered and is forced to kill or be killed. Unwilling to risk exposure, Grifter sends Adrianna to jump him out via teleportation only if he can ensure their is no risk of exposure. 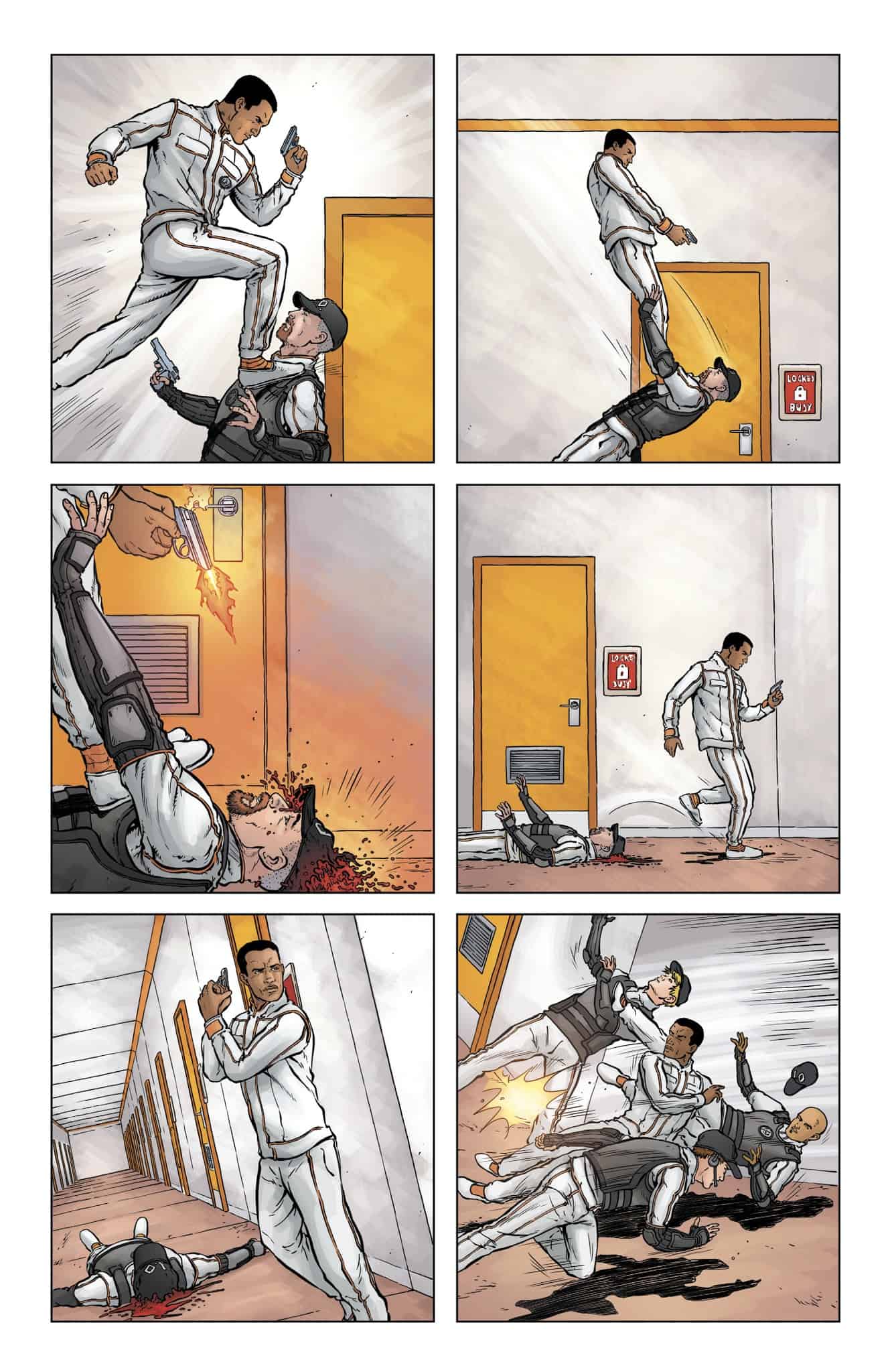 With John safely with Cole and the others, the group compares notes while Angie presses Marlowe on his own identity and the nature of who he is.

In the same manner as previous issues, there is a consistent formula Warren Ellis repeats. The book opens with some new scene, often a new character introduction, followed by a gore filled gun fight, and ends with a massive amount of verbal recap.

The unfortunate part about Wildstorm is that every time you feel a sense of quickened pace or real development which would amount to something, Ellis quickly hits the brakes and replicates the same procedure in every issue. Though I like the story well enough, that in itself would be the inherent issue for me. There is nothing that really launches me into the story or provides any significant endearing qualities.

There are so many plot lines going that a lot of the intended subtext gets lost with the mass amount of dialog with no break and balance with action. At the end of each issue I usually feel that though the story itself is decent, there is so much minutia that it just feels really weighed down and takes itself just a bit too seriously.

Though Ellis stated he would provide a whole new take on the Wildstorm universe, I still feel that there is a significant lack of energy to keep the reader engaged. Artistically there are moments, typically in the battle scenes, which Hunt gets to stretch his legs but momentum is always cut short by a somewhat tedious need by Ellis to heap as much contextual dialog into the issue as possible. It’s been so many issues since Zealot and Voodoo have been featured that I nearly forgot that they were included in the comic and larger story line. You would think a bit more shifting between scenes and keeping the reader abreast of characters whereabouts would help with pacing. Of course this could also be intentional as DC has released the “Wildstorm: Michael Cray” spin off and additional books are reportedly to follow which at this point may be for the best to slim down the cast in order to add momentum.

Final Thought:  This series gets a lot of hype and critical acclaim but I feel like most of it leans heavily on nostalgia. Though Warren Ellis does provide some unique and interesting creativity in reinventing new identities to old concepts, he fails to really do anything of interest with them.