WOLVERINE #19: Not Made for Defeat 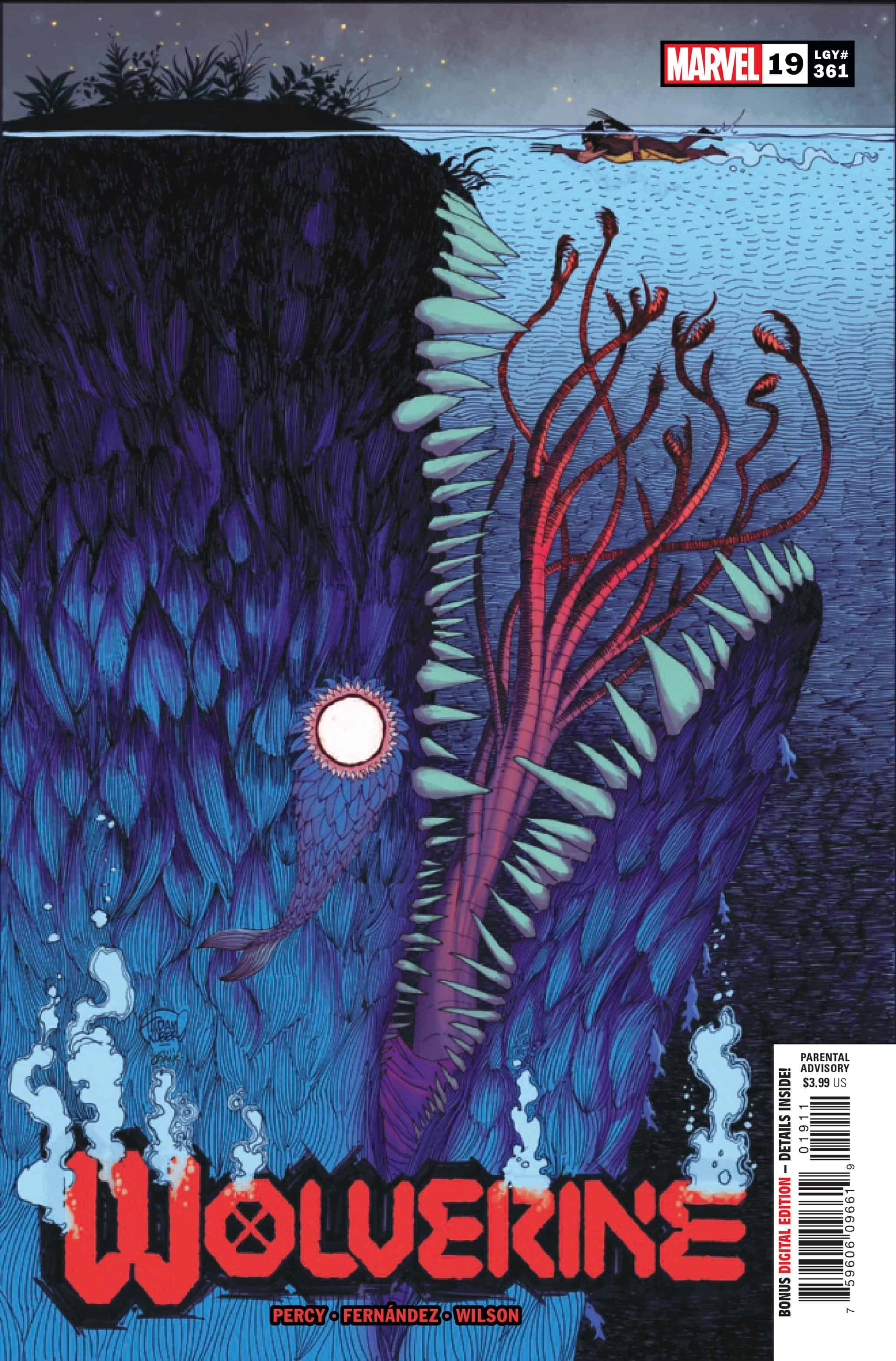 THE OLD MUTANT AND THE SEA!

It's the one that got away...but not for long! The deadliest creature on Krakoa is off its shore, and the deadliest mutant there is will at last set out to hunt the leviathan he encountered on an X-FORCE mission. But can WOLVERINE take down this hidden creature of the deep that's bigger and stronger and older than math can figure? He better, because no one is safe until he does. 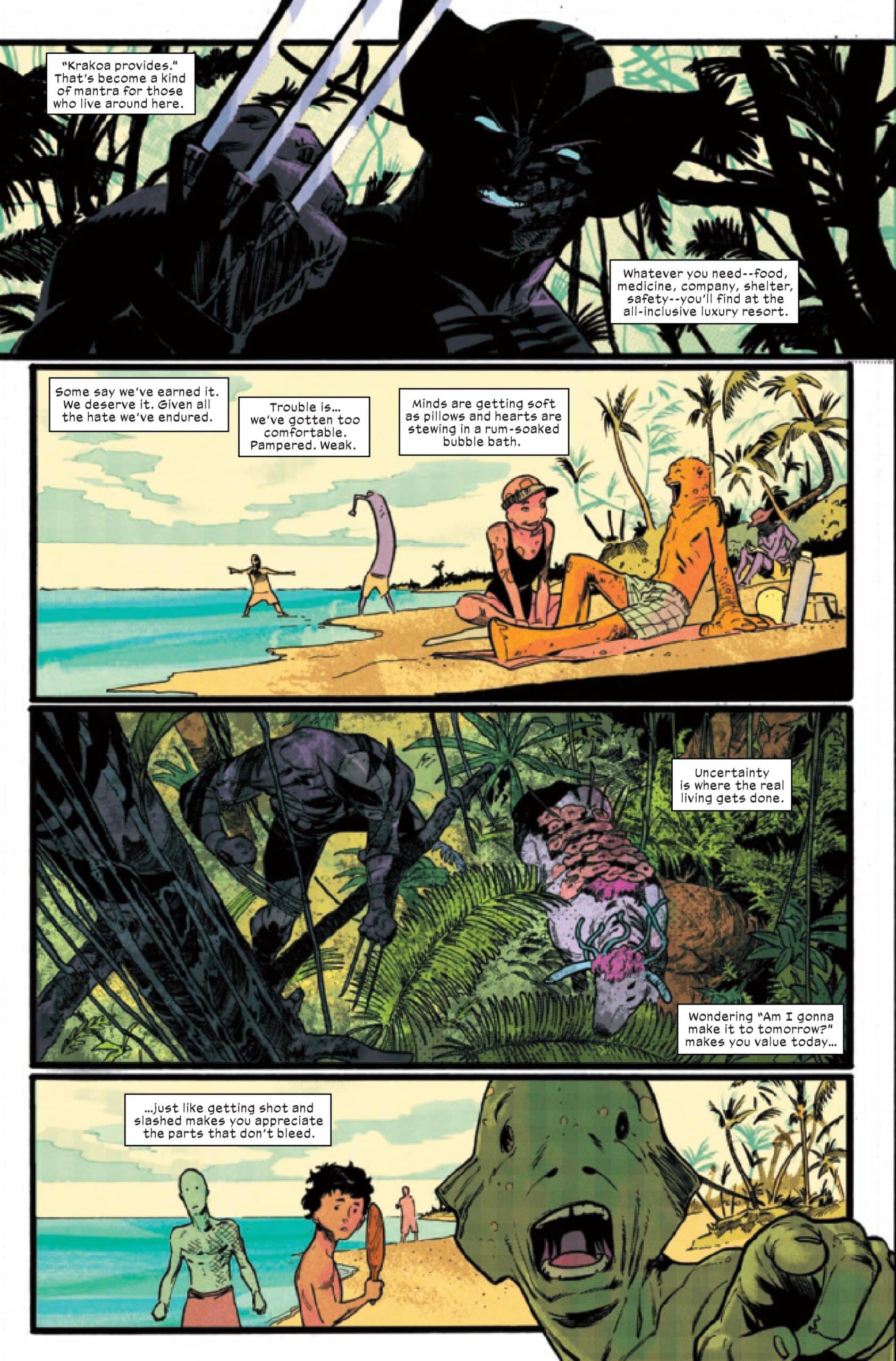 With X LIVES OF WOLVERINE and X DEATHS OF WOLVERINE kicking off early next year, it looks like readers will have their fill of Wolverine. WOLVERINE #19 seems to be the calm before the storm, if you can call this calm, with a strange but somewhat comforting meditation on life and death. The themes of life, death, and aging are found throughout with strong nods to Ernest Hemingway’s The Old Man and the Sea. Early on, Wolverine mentions that he always makes a point to greet the dawn. In Hemingway’s novella, the old man says, “Why do old men wake so early? Is it to have one longer day?” Wolverine’s explanation is that it keeps him grounded, and “Because what does a 24-hour day even look like anymore, with gates giving us split-second access to the world?” Mutants are moving further from humanity faster than ever, but I have always enjoyed Wolverine as a character for trying to maintain some form of humanity in him. In the Krakoa era, this is more important than ever.

Percy’s writing is strong as ever, and at this point, I cannot see another writer taking on the characters, especially after seeing how much the Wolverine is going to be used moving forward. You could omit Percy’s writing and still have a cohesive, exciting narrative. However, Percy’s writing is what elevates this issue to greater heights. Going head to head with a giant leviathan is scary enough, but the true horror of the issue is a story that Wolverine tells. On a mission gone wrong years ago, he became trapped in a lower deck of a shipwreck. The tide would come in and drown him and when it went back out he would revive. He went through this cycle twice a day for two months. The thought of drowning is enough to keep me up at night, but having to do it every day and know it is going to happen is absolutely terrifying.

A story like this deserves great art to accompany it, and Javi Fernadez and Matthew Wilson absolutely deliver with their pencils and colors respectively. The two artists capture the grittiness and vastness of the sea from the really drive the idea home that Wolverine is completely alone in the vast darkness. There are multiple full-page images of the descent into the darkness of the sea that really give you the sense of the vastness of the ocean. On top of this, the artists deliver some of the best action I have seen in a long time with some incredible monster designs. Wilson’s colors perfectly capture the dark coldness of the sea or the way the morning light hits the water. Something that is also worth noting is the stunning cover by Adam Kubert and Frank Martin, which perfectly captures the terror of the issue.

WOLVERINE #19 finds our favorite mutant at sea in a haunting meditation on life and death. This may be my favorite single issue of any series this year. As someone who reads mostly digital these days, I can say that I am marching to the store to buy a copy of this issue.

WOLVERINE #19: Not Made for Defeat