WOLVERINE ANNUAL #1: The Ugly Truth Beneath 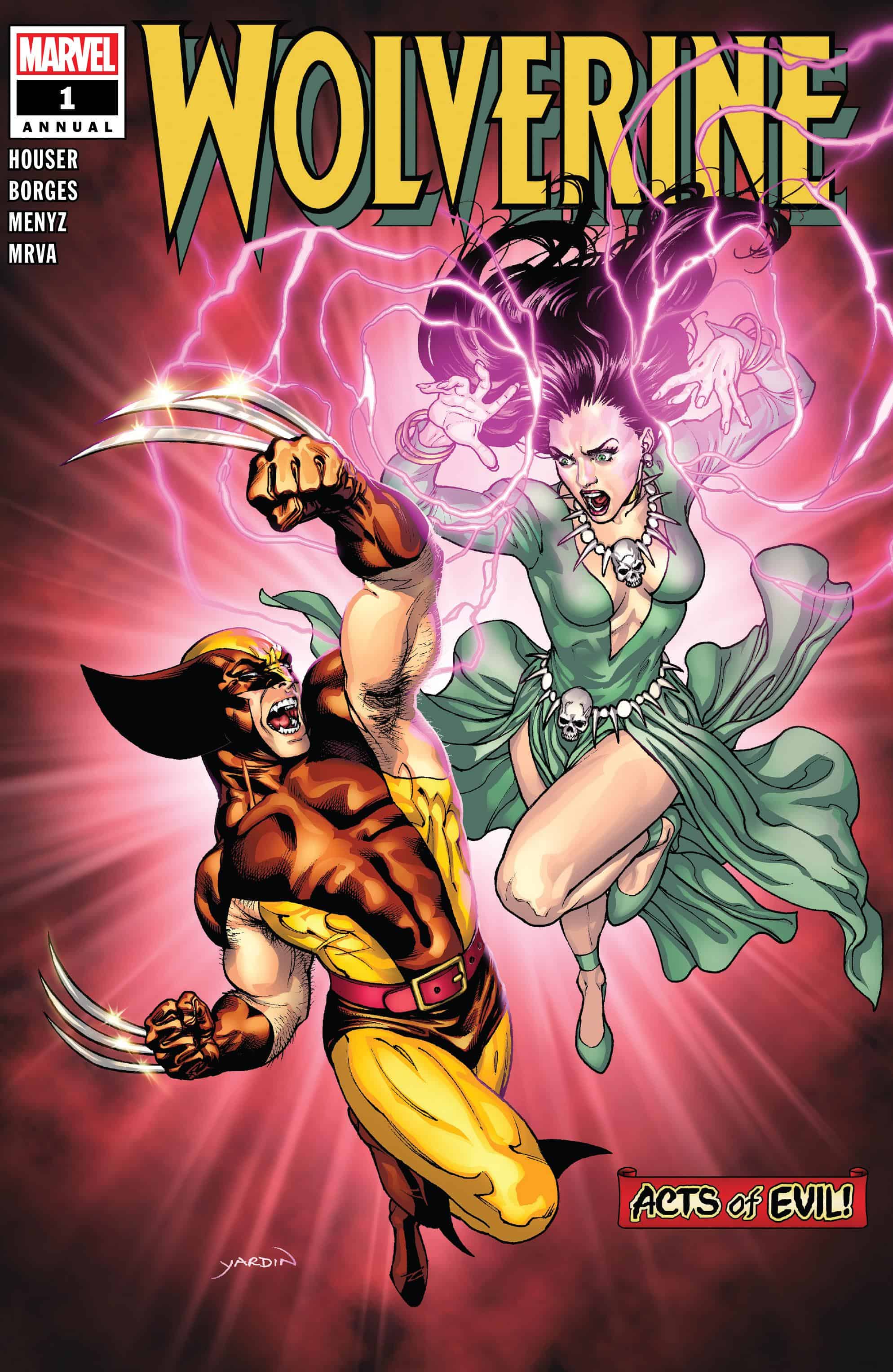 Acts Of Evil continue as this one-shot finds the man named Logan confronting a tragic piece of his past to try to make amends in a story that pits the ferocity of the man they call the Wolverine against the machinations of the evil sorceress Morgan Le Fey!

I have to be honest, when these “Acts of Evil” one-shots were initially announced, my gut reaction was “What the hell are they doing?” However just like the Punisher vs. The Brood one-shot previously, Marvel proves the right creative team can make any combination of characters work and tell compelling stories using those unlikely combinations.

The best stories about Wolverine are not always ones where all he does is kill and stab everything in his path but rather where the man Logan confronts and wrestles with his nature or his past to try and set right the mistakes of his past. This is exactly how Jody Houser approaches this issue and it makes the story vastly more compelling than a mindless action joint. 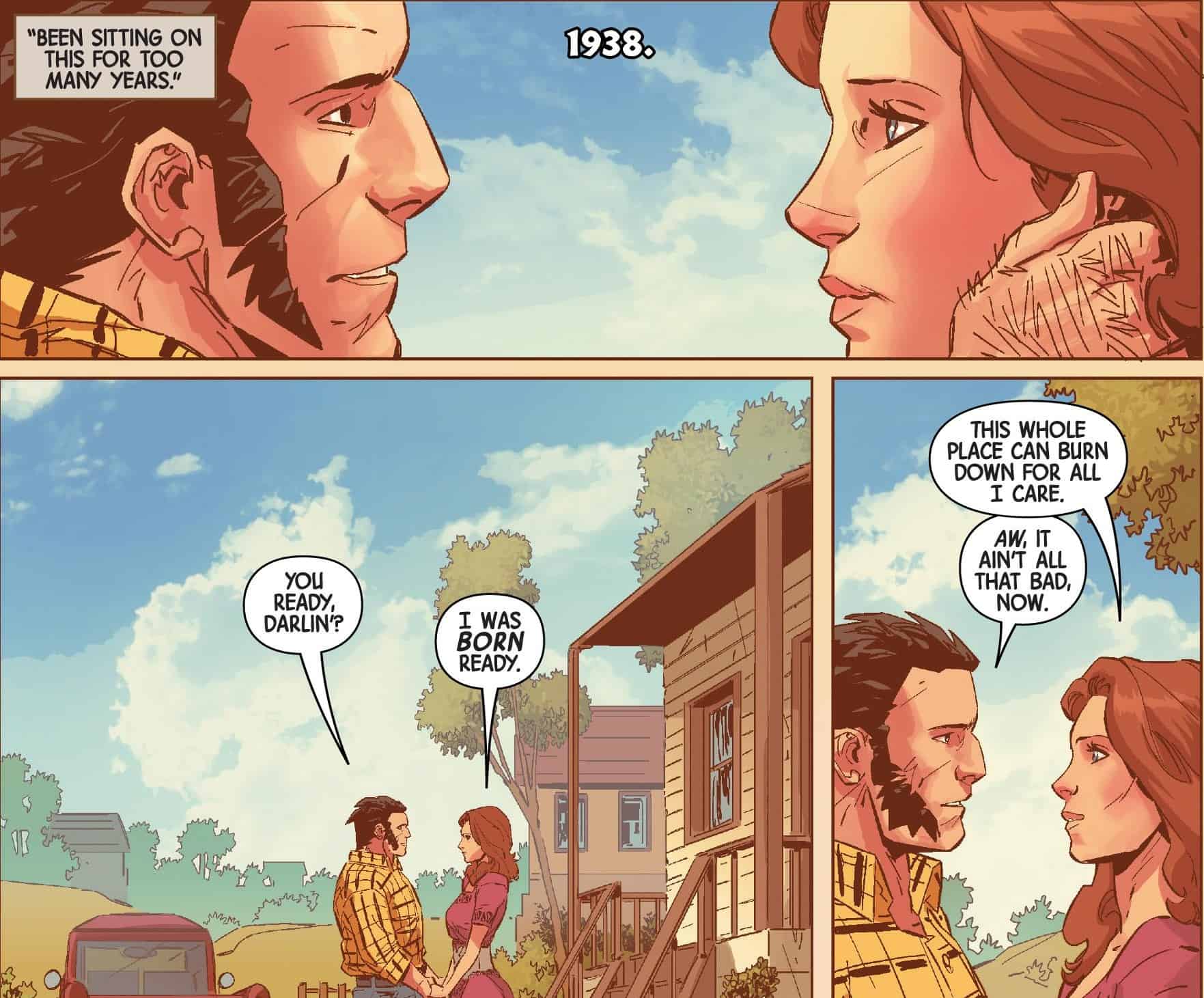 The story splits itself between the past and the present as Logan goes to confront a piece of his past he isn’t proud of. In doing so we learn about a love affair gone awry as a much younger Logan comes face to face with a former lover named Celia Stroud. Houser writes a perfectly voiced Logan: broody and tragic, a man carrying a past full of loss that confronts loss again and again as he searches for love but ultimately cannot escape the nature of who or what he is. When Celia confronts him after an accident which would have mortally injured a normal person she lures him to a location and a “group” with the promises of answers to who and what he is. Of course, it’s a trap and Logan comes up against Morgan La Fey, who has possessed Celia and is seeking to use the savage dark nature of Logan’s life force to fuel an army of Darkness and also eliminate a future enemy. 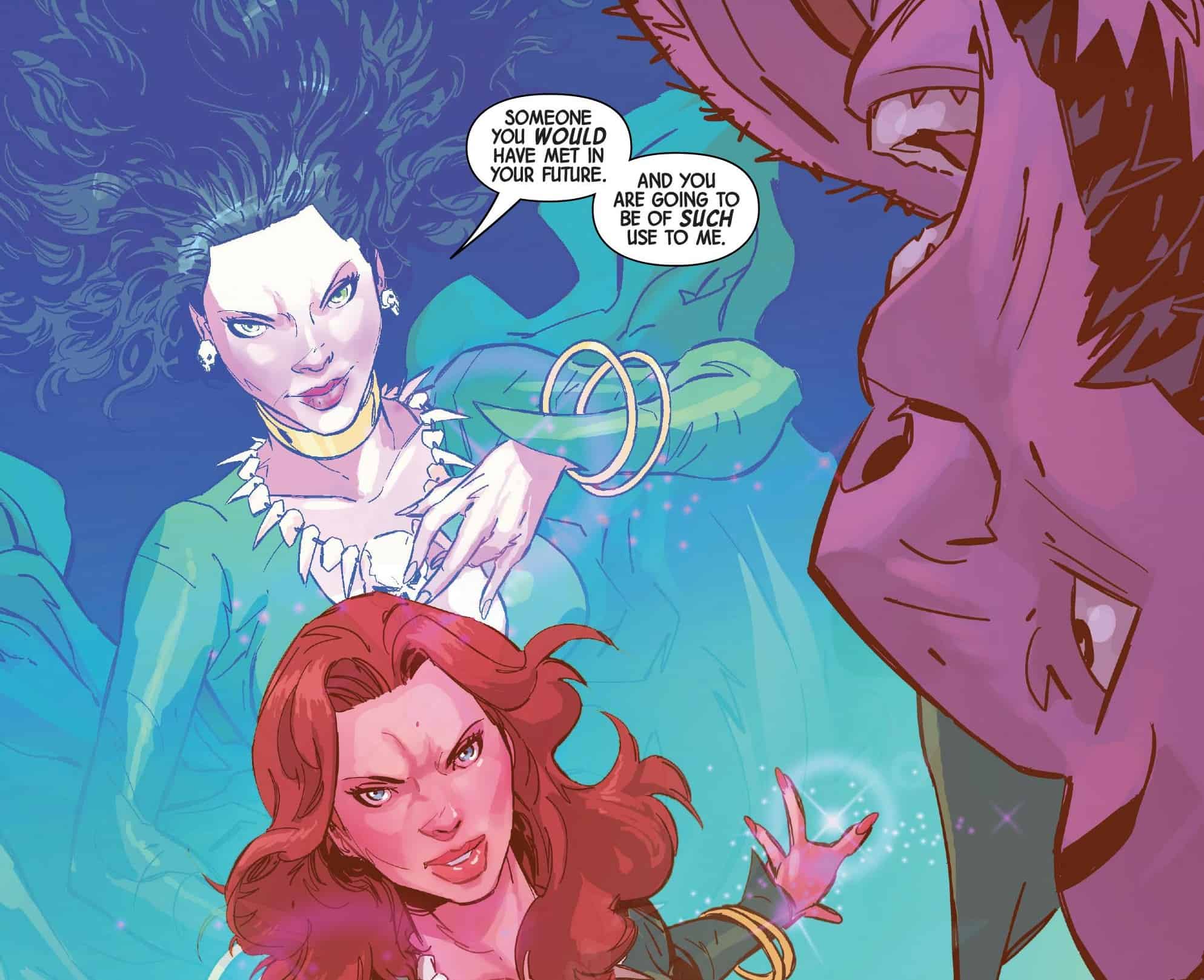 Up until this point, it’s all pretty standard but Houser very cleverly adds a twist as Logan manages to defeat La Fey by injuring the woman he still cares for. Jump forward to the future as Logan goes to see a 100-year-old Celia to apologize for what happened and we learn that really sometimes beauty is really only skin deep. It’s clever, tragic, dark compelling writing that really adds a fantastic dimension to the subjects Houser is writing about. 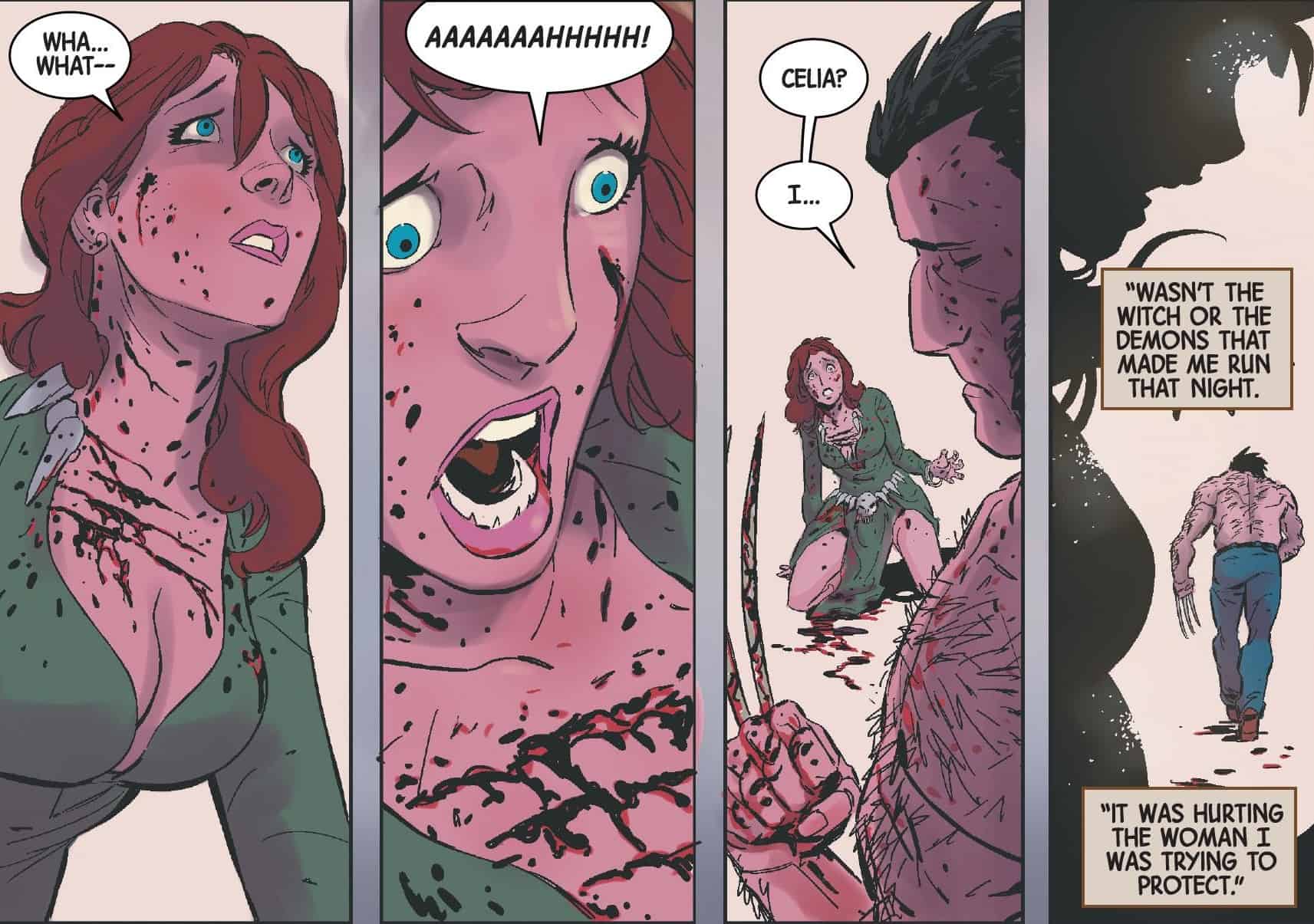 The art from the creative team is well suited to the nature of the tale. Borges doesn’t draw the overly attractive comic book Wolverine we see quite often. He captures the short hairy muscular scrapper nature of Logan in his drawing (I am particularly fond of how he draws Wolverine’s nose) which I love to see but also humanizes Logan with excellent facial expression. We get to see a younger Logan, a modern Logan as well as a bit of the costumed Wolverine in this issue and Borges take on his anatomy is spot on. 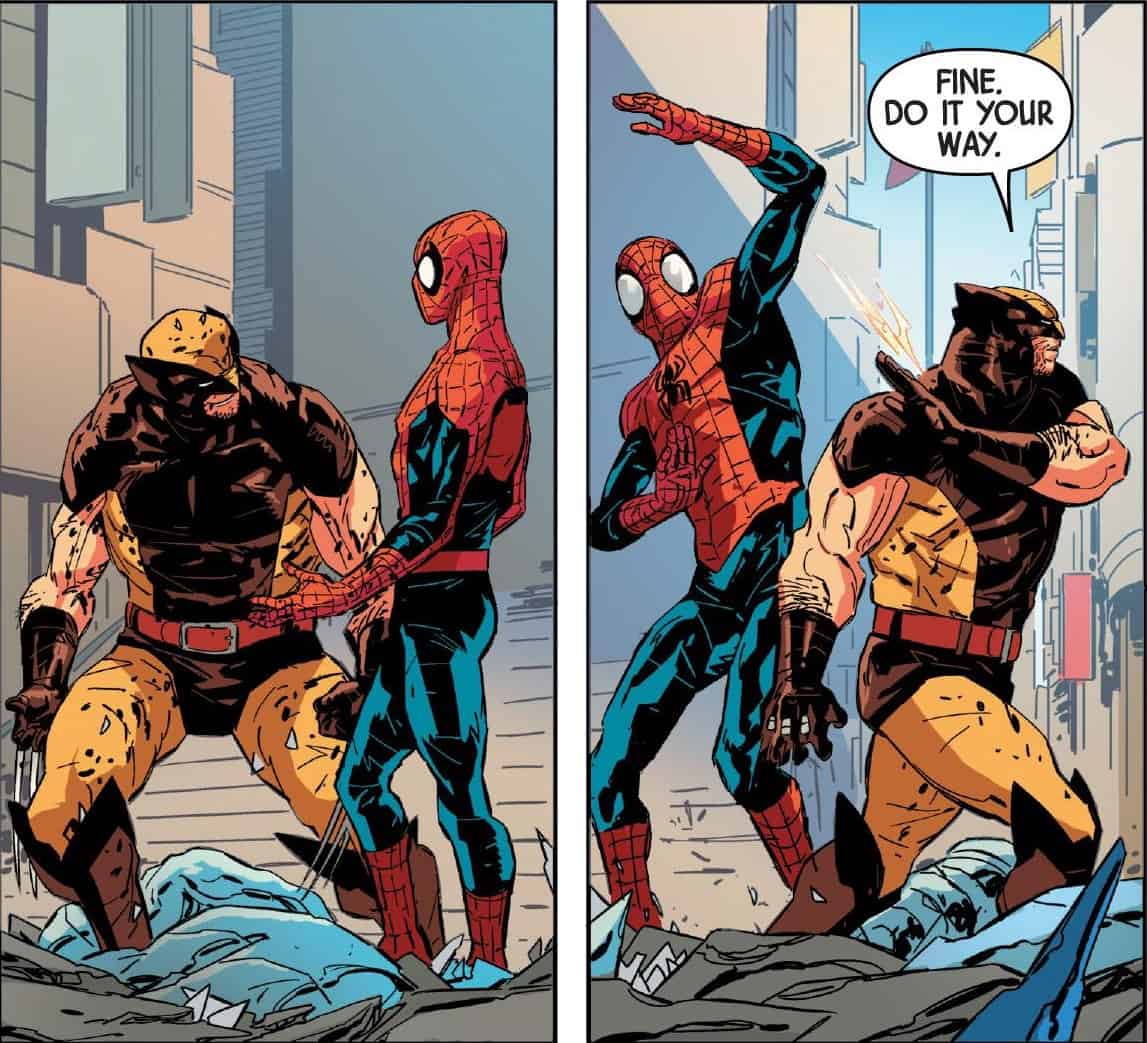 The use of color by both colorists is cleverly complementary to the time periods of the story and whoever decided to use the color wash idea over the flashback pages really added a cool component to the issue. The lettering by Petit is well placed and helps the issue read very easily while maintaining a flow to the story.

David Yardin is a fantastic artist and his cover for the issue is striking and eye-catching.

Overall a sterling effort from Houser and the art team which  ultimately ends up telling the kind of Wolverine story I like to read: one that looks at the tragedy of Logan as a character while examining the greedy selfish nature part of the human condition as the man known as the Wolverine continues in his long life to try to make up for the sins of his past.

WOLVERINE ANNUAL #1: The Ugly Truth Beneath