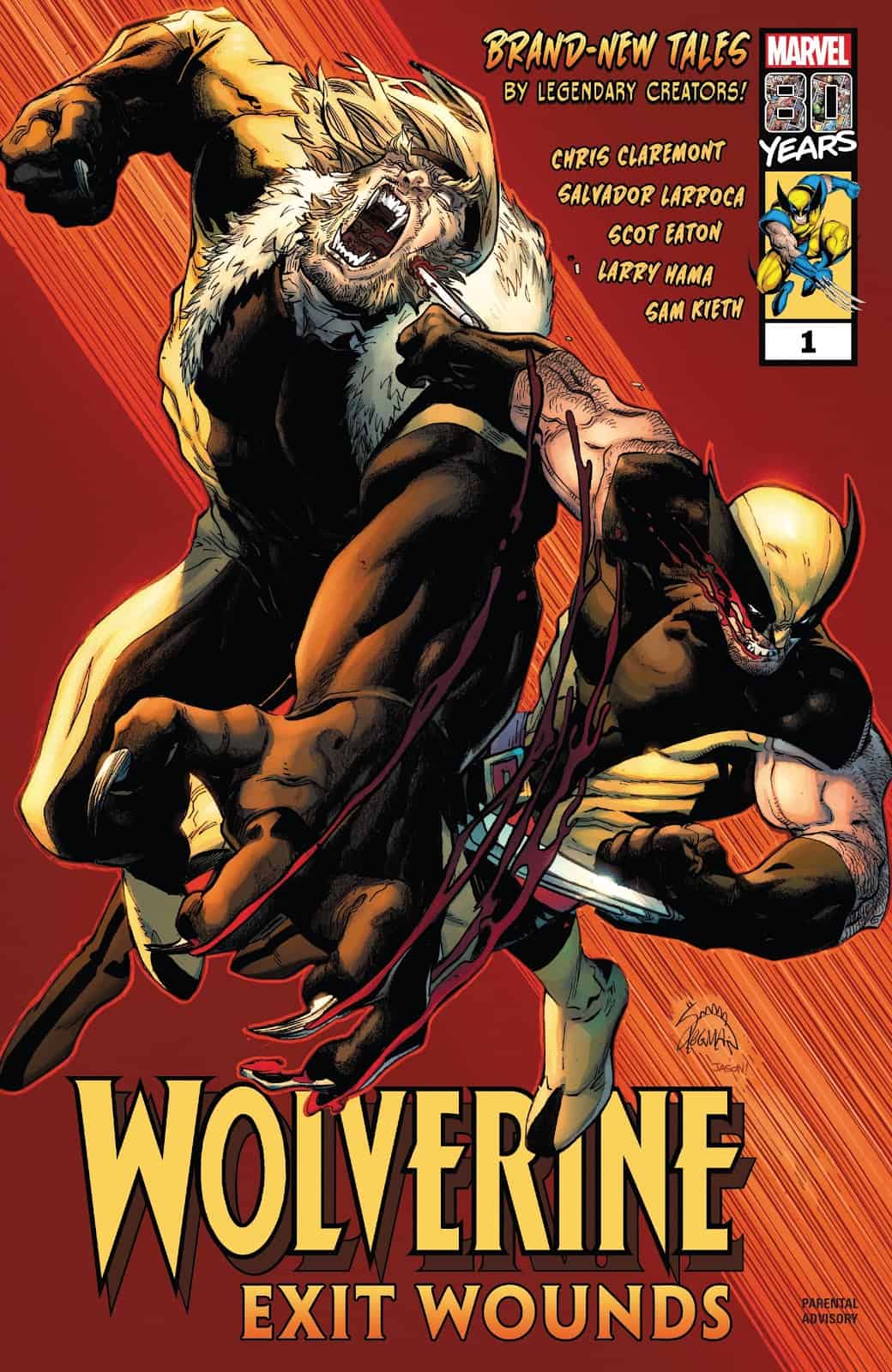 I’m a simple man when it comes to Wolverine comics. I’ll take any excuse to watch James Howlett get triggered into a berserker rage, slicing and dicing feral enemies followed by brooding over his convoluted past. Wolverine Exit Wounds caters exactly to that mind set. This one-off special provides three short Wolverine stories from returning Wolverine writers and artists such as Chris Claremont and Sam Keith. While they don’t exactly reinvent the wheel when it comes to Wolverine stories, they do provide the mindless bloody fun we seek in our Wolverine stories without forgetting to tap into the tragic and compassionate figure he is behind the claws.

The first story in our special is  “Red In Tooth and Claw” by Larry Hama. Here we travel back to Wolverine’s time as mutant test subject “Weapon X” as facility scientists study the capacity for this dangerous mutant.

The plot was simple enough if a little thin, Weapon X scientists send Logan into the snowy wildness to see how he does against wolves and one coked up grizzly bear. Too bad for everyone, Logan’s frazzled brain hallucinates Sabertooth taunting him from when he had just killed Logan’s former flame Silver Fox on possibly the worst birthday ever.

After witnessing some good ol’Canadian berserker rage, the Weapon X scientists realize “Zoinks! Maybe just maybe this deadly mutant is more dangerous than we thought!” So yeah, it wasn’t exactly a story that hasn’t been done a dozen times in the past by other writers, including Hama.

The art was decent enough and I enjoyed all of the action scenes, especially that of Weapon X Wolverine decapitating that grizzly bear.

While the story doesn’t do anything new or ground breaking its a mild enough tale to provide a brief peak into a unique era in Logan’s colorful, screwed up life. 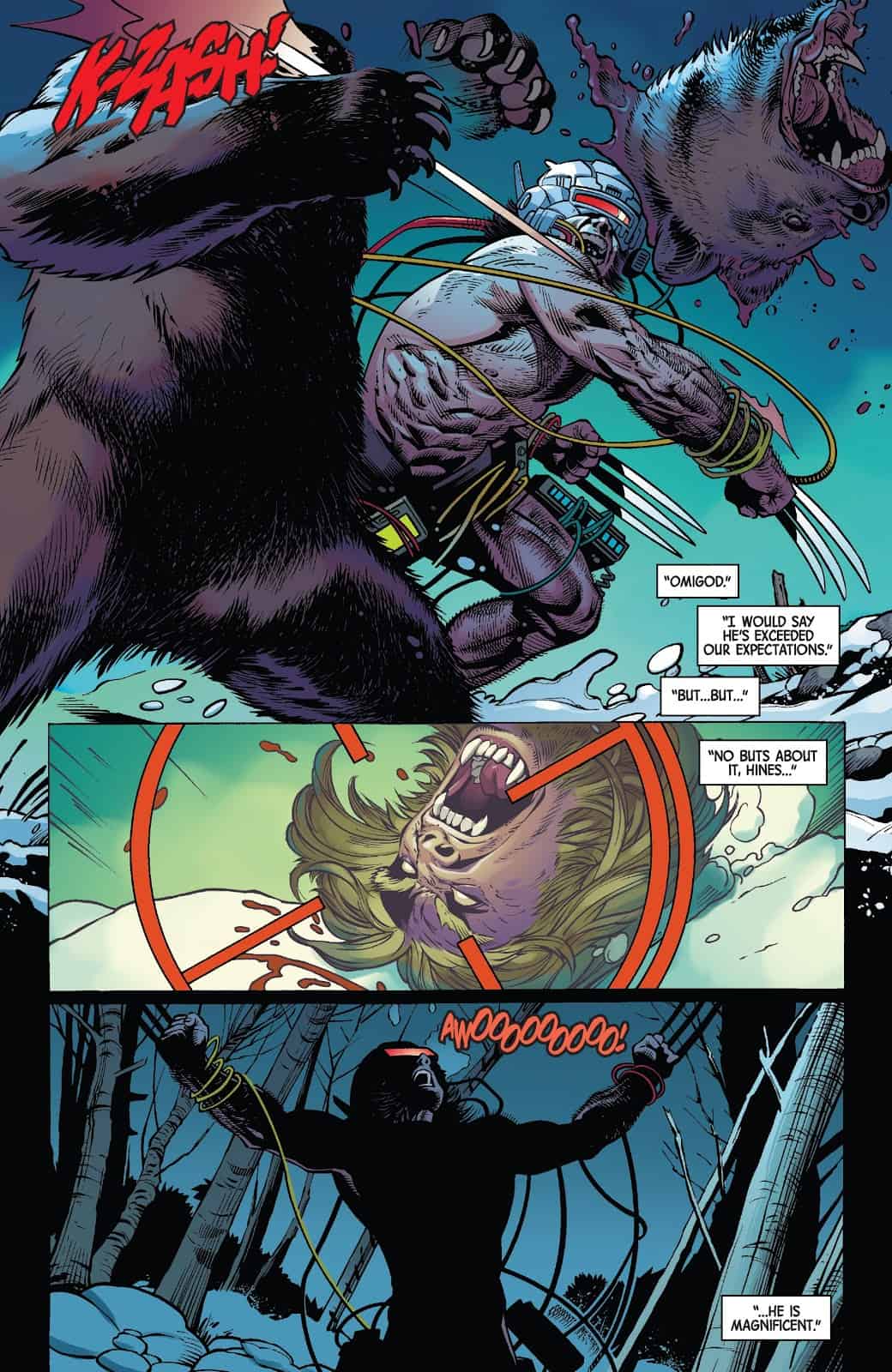 Next up in our Wolverine anthology special is “Aftermath” by legendary X-scribe Chris Claremont. This was a story set in Japan shortly after Kitty Pryde had first joined the X-Men to be precise. Wolverine’s love/hate connection with Japan is just another piece of the character’s rich history (see Brian K Vaughn’s brilliant Wolverine:Logan) and it was nice seeing Yukio along for the story. It was fun reading Logan telling Kitty about how knowledge is power right before telling her to shut it when she got too annoying reminding us of what a grouchy and blunt mentor he is.

I found the premise of this story “Wolverine helps protect the owners of ramen shop he’s friends with from the thugs of a rival shop after the shop’s secret ramen recipe” to be a really simple and fun idea. Unfortunately Claremont couldn’t just leave it at that. No apparently, long ago Wolverine had a relationship with the ramen shop owner’s great great great great grandmother and the the woman and her child currently living in the shop are Logan’s descendants. Erm all right then?

Honestly, I found that last part to be a little contrived. Did the ramen shop have to be owned by the descendants of a secret family Logan never mentioned before? In all fairness this is the same Wolverine who once unknowingly killed a gang of assassins literally all comprised of illegitimate children he had fathered in his long life so I guess its not that contrived? As far as I know the family in the ramen shop don’t have any bearing on any other Wolverine story but maybe I need to do more research. Anyway it was a fun little story with a great setting and a reminder that Wolverine has the discipline to take the nonlethal approach even when it seems the easiest. 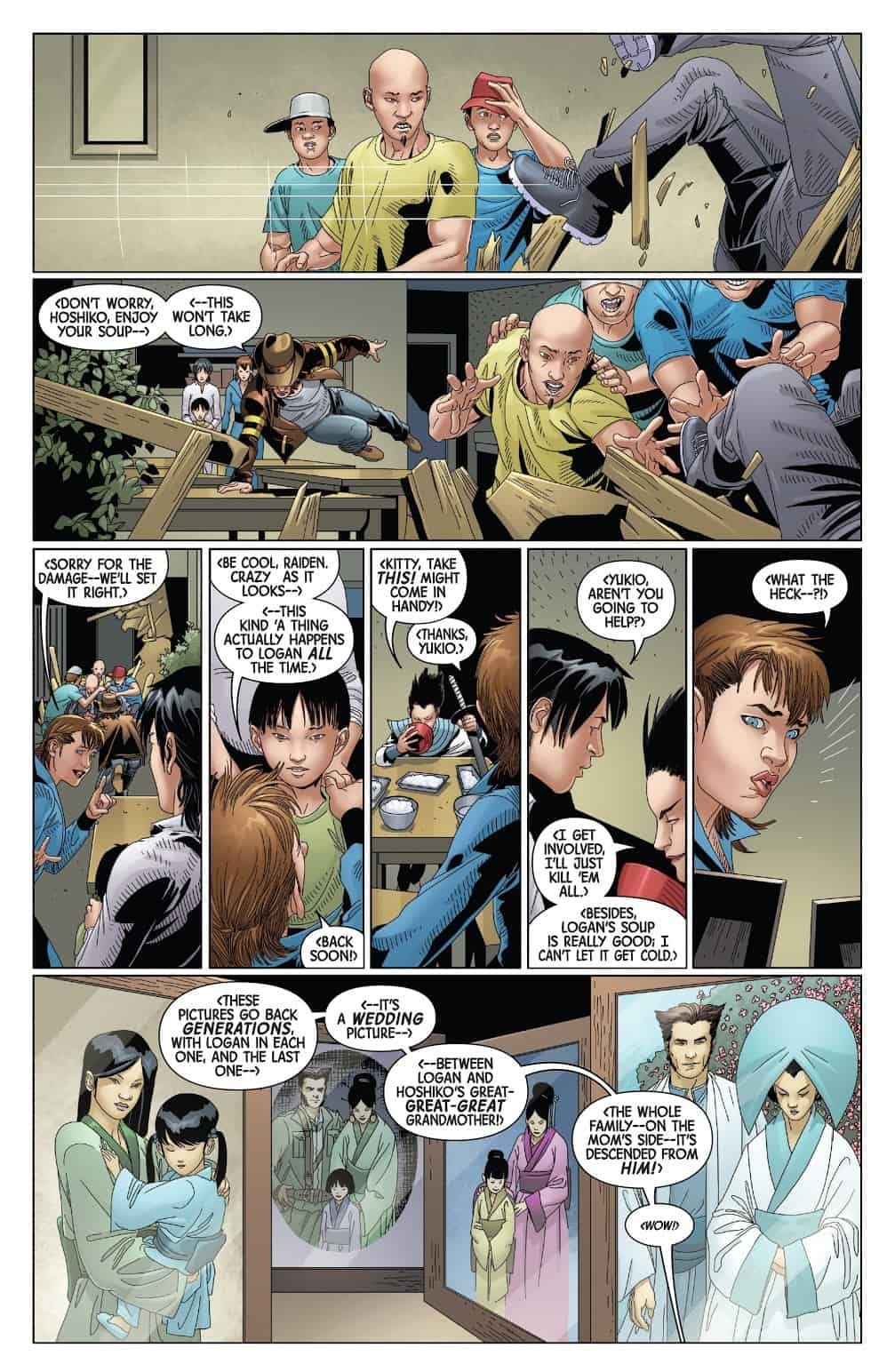 Our third and final story in Exit Wounds is “Logan” by writer/artist Sam Keith of “The Maxx” fame. A Wolverine vs. Venom story in the outrageous style of Sam Keith? Oh hell yeah, now we’re talking. Here, there is barely any attempt at a story. Throw in a line about Wolverine being blackmailed to take out a rival drug cartel and thats all the set up you’re gonna get. Almost immediately Venom creeps out from a tree and starts trying to devour Wolverine. It’s a fight for his life, but that’s just another day for our favorite Canadian right?

Sam Keith’s exaggerated art style may not be for everyone but there aren’t any better characters to bring his distinct style to than the unique designs of Wolverine and Venom. The typically disproportionate aspects of the characters blended well with Keith’s art creating what was easily my favorite story out of the three even if it was possibly the briefest.

No, there is no explanation for why Venom is in the jungle with Wolverine or what happens to that drug cartel so maybe I’m giving the story a pass because I enjoyed the art so much. If I was to nitpick I’d point out that the final page of Logan crouched over Venom seemed all too like a drawing Keith did of The Maxx and just tweaked it to look like Wolverine. Still that doesn’t negate a short but memorable and visually pleasing fight between Logan and Venom. 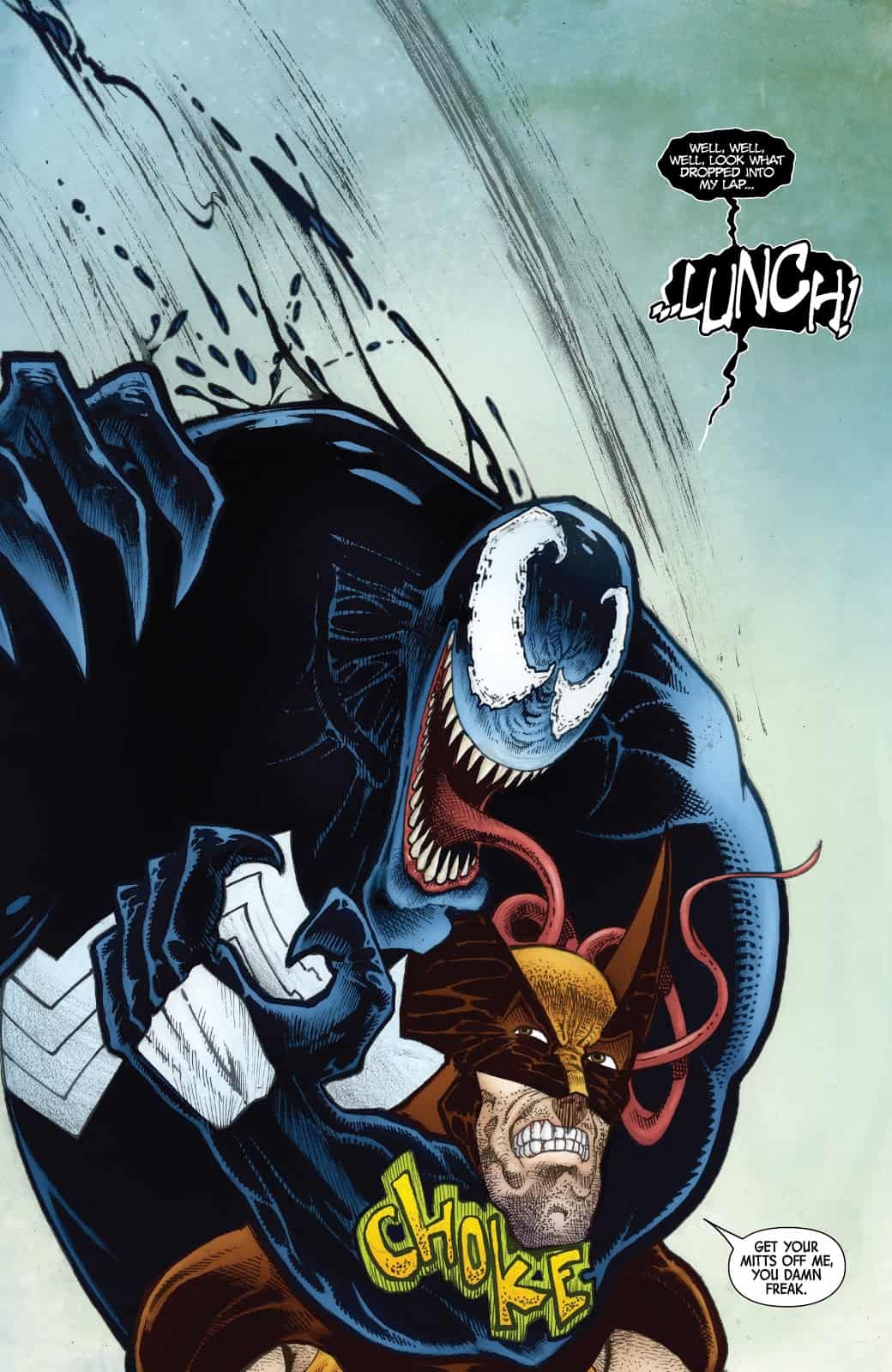 The stories in Wolverine Exit Wounds aren’t anything innovative or take the character anywhere new. Still, these three flash fictions into the life of our favorite Canadian mutant hit just enough beats to pass as satisfying Wolverine tales to satisfy the fan in us. If you are a die hard Wolverine fan then go ahead and pick up this special, otherwise I’d advise to wait to spend your money until it is inevitably collected in a trade with more Wolverine stories. All in all, Wolverine Exit Wounds was a light journey through familiar if enjoyable territory for the character and a nice revisit from all these former Wolverine contributors.