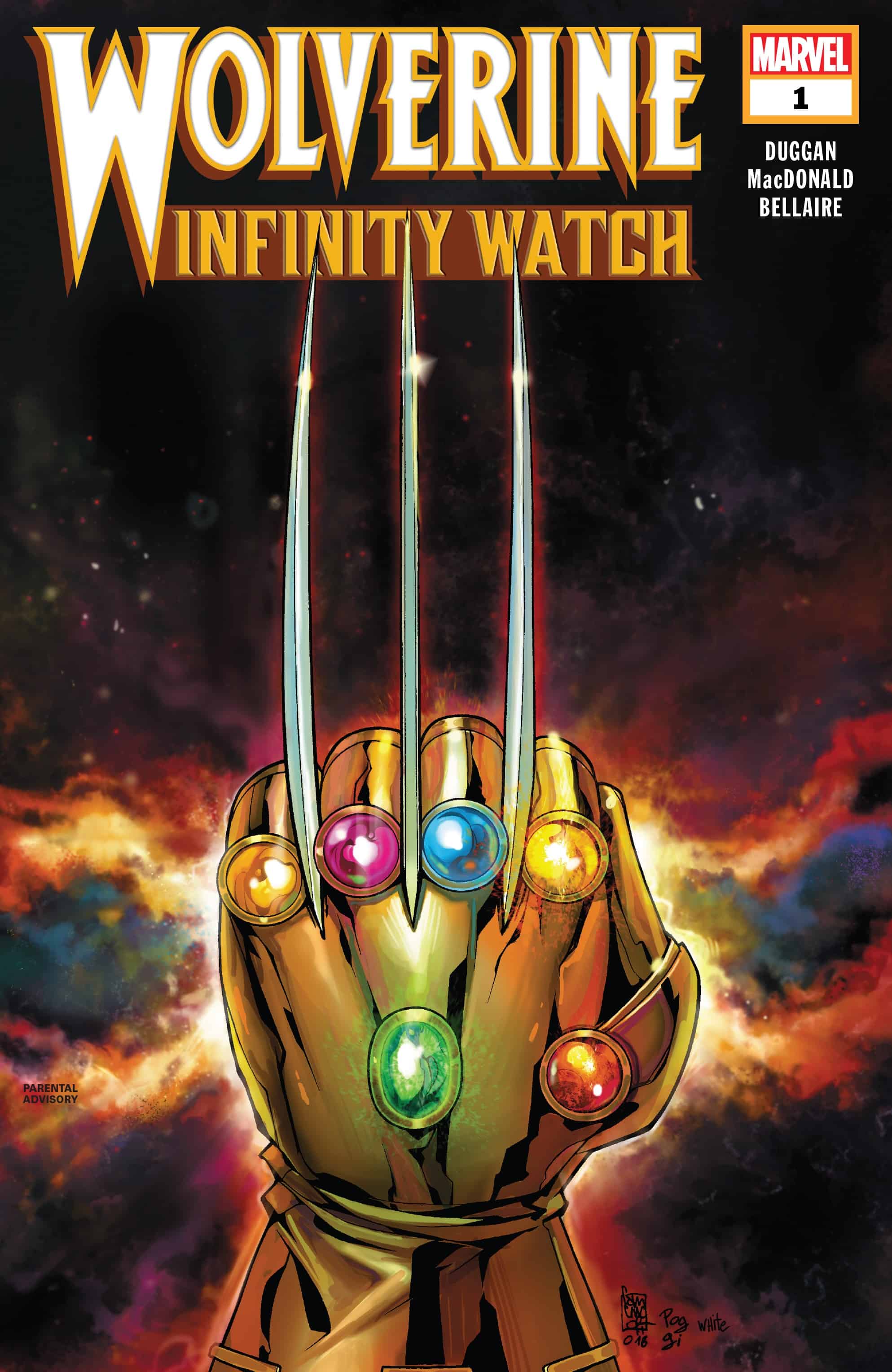 Wolverine is alive! Read Return of Wolverine #5 - also on sale February 22 - before reading this issue (or just take my word for it).

Freshly returned to the land of the living, Wolverine makes a break for the Xavier Institute, the one place he's always called home. 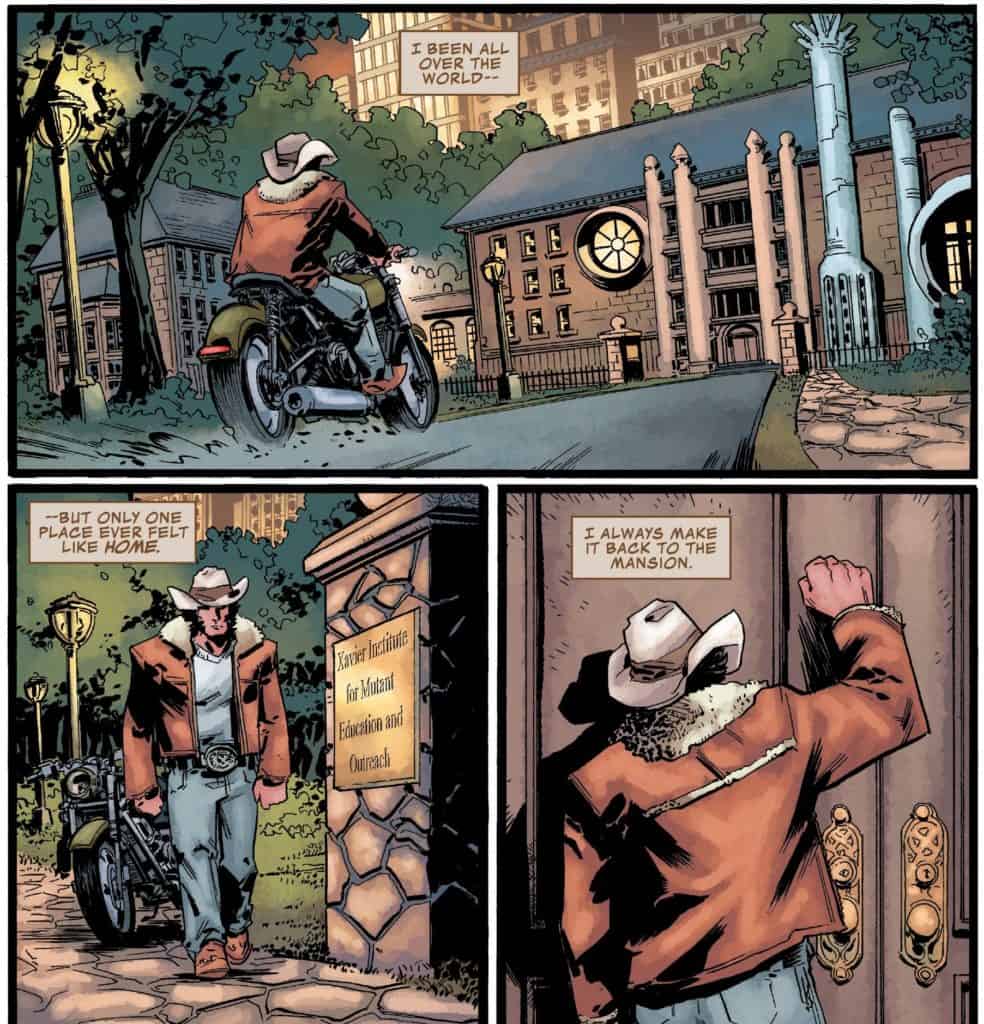 But there's a surprise waiting for him instead - Loki Laufeyson, the Norse trickster god himself! He has a thing or two to say to Logan, but Logan doesn't have a clue what he's talking about. 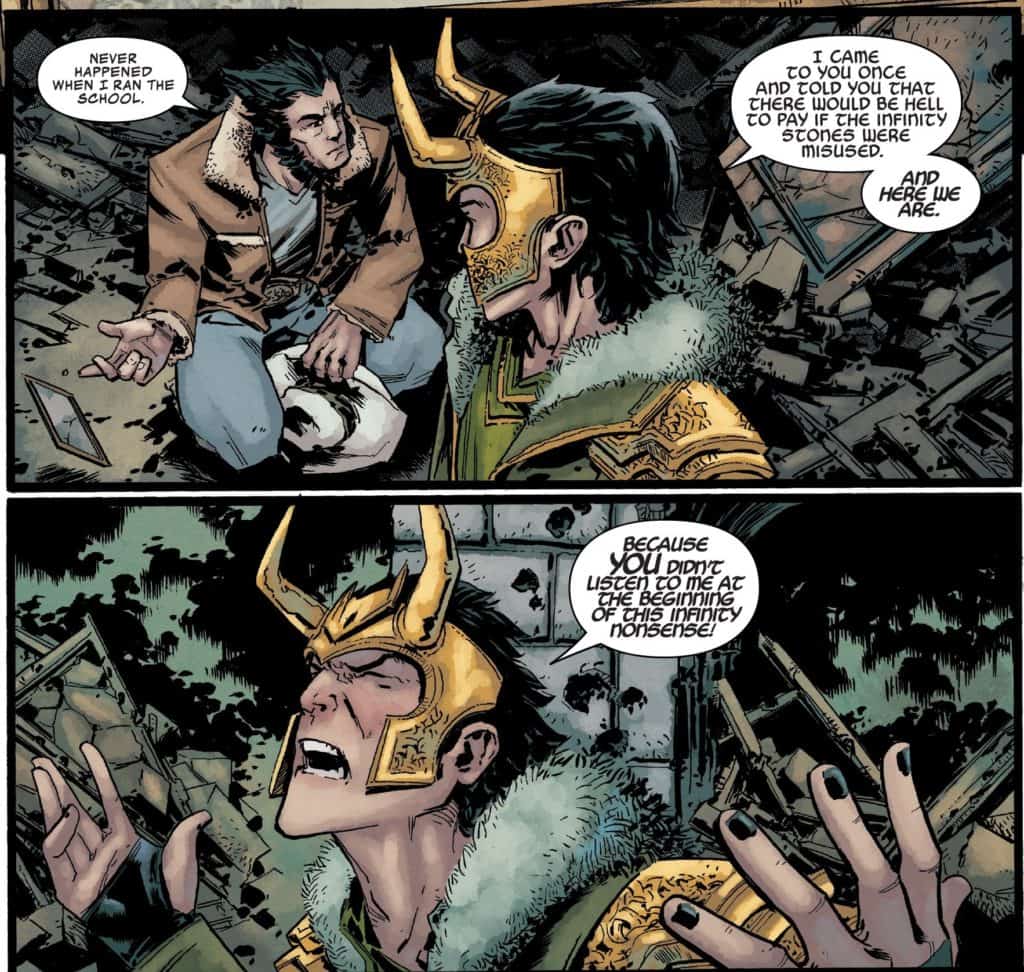 Things get even more bizarre when Logan's future self - possessed by the Phoenix force - also shows up! 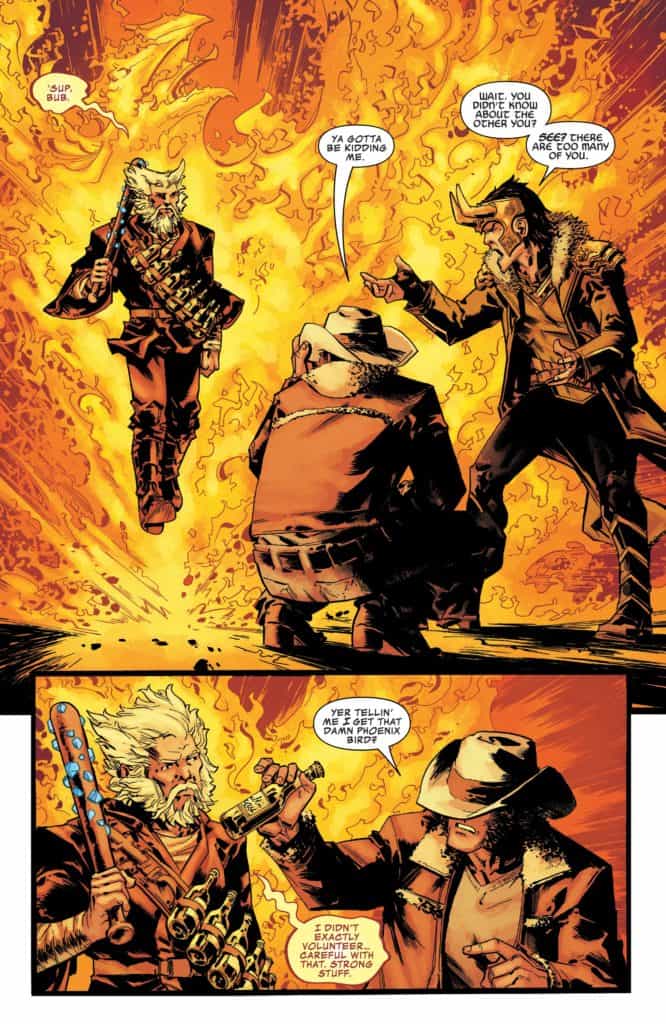 Phoenix-Wolverine has a dire warning about the Infinity Stones: they're hidden on Earth, and thanks to Adam Warlock, each stone was given a soul - and thus became an ordinary, nondescript human! The race is on to find the Stones, but there are some other cosmic heavy-hitters about to enter the fray as well! Enter: Warbringer of the Chitauri! 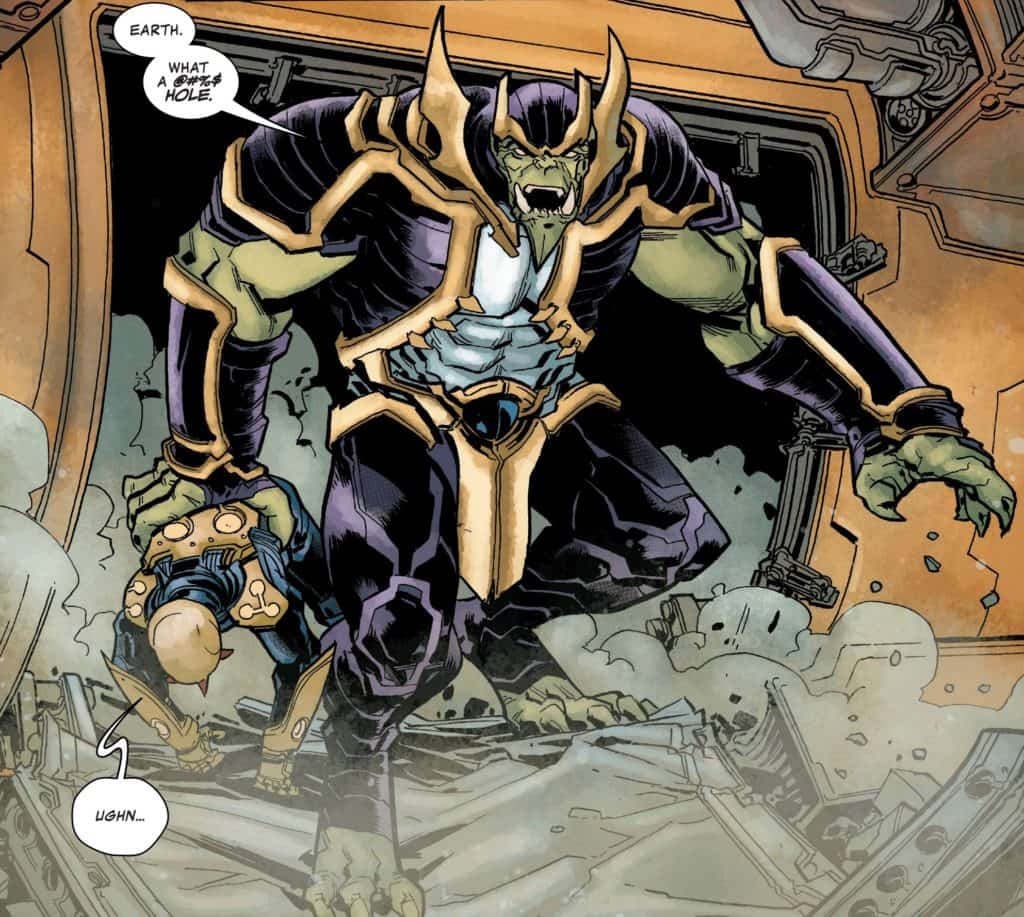 And so it goes, a year and a half or so after he first came back in Marvel Legacy #1, Marvel finally begins to pull back the curtain on just how the Ol’ Canucklehead came to possess the Space Gem.

The X-Men have a long and storied history of occasionally being involved with cosmic space opera, and this… isn’t that. In Wolverine: Infinity Watch, author Gerry Duggan takes a cheeky approach to the proceedings – not a full on parody or comedy, but like he has a slight smirk in his eye the entire time, as though he knows just how silly this is but can’t quite find the balance between that and good old-fashioned yee-haw fun (a trick fellow Wolvie-scribe alum Jason Aaron usually pulls off quite neatly). Every time the story starts to move in a serious direction, something ludicrous or otherwise askew happens to undermine it. It’s as though he spent a few too many years writing Deadpool and inadvertently got stuck in that mode of writing. 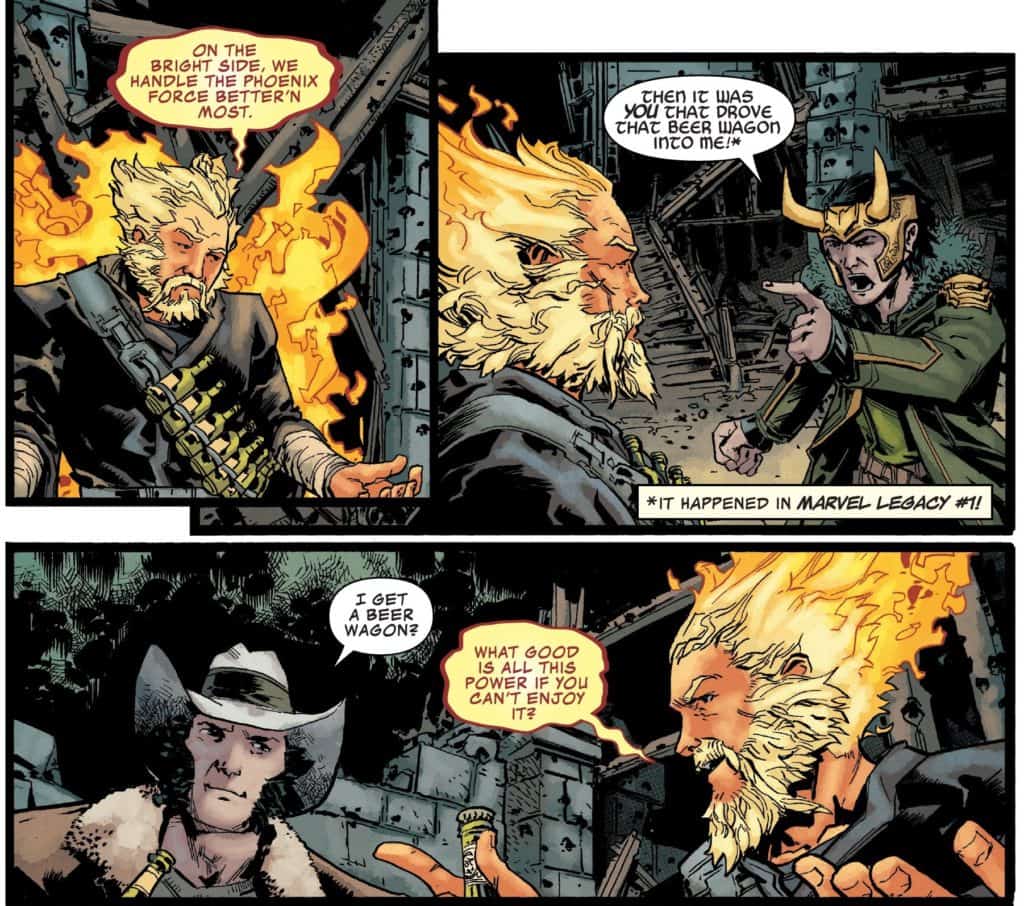 “Wait, this ISN’T a Deadpool comic?”

Then again, the story itself is quite Frankenstein’s monster of random, ill-fitting parts. It’s up to the reader to decide if Wolverine Goes Cosmic is, conceptually, something they can swallow, rather than a bridge too far. I generally take a wait-and-see approach with out-of-left-field plots like this; it would probably be aided though if the story weren’t also reliant on lazy coincidences such as Loki happening to be at the wrecked Xavier Institute just as Logan shows up with an illusion tailor-made just for him, or the Chitauri warrior at the end who happens to be standing next to a TV that tells him where to find someone right as he asks where that person is. 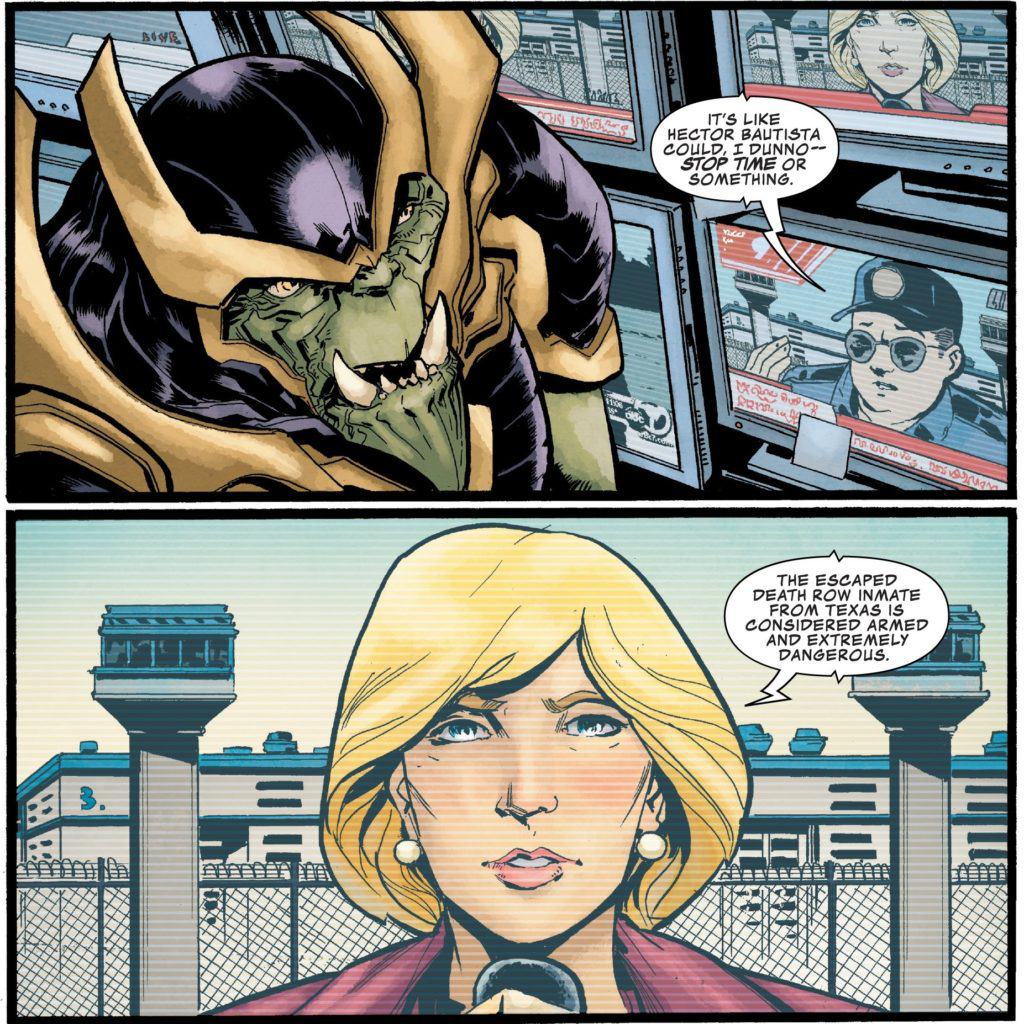 It’s also pretty jarring to have Wolverine casually treating Loki like a has-been pin cushion he can’t even pretend to take seriously, and then have the same response when his own samurai-clothed future-self show up wearing a bandolier loaded with beer bottles, AND possessed by the Phoenix Force – a revelation that Logan just shrugs off. After everything he’s witnessed regarding the Phoenix, this should be a heavy moment; instead, Duggan writes Logan as though he could care less.

And that’s really the problem here: throughout the story, Wolverine continually acts like he could care less about what’s going on around him. If that’s his assessment, what does that mean for readers?

Sadly, the art doesn’t fare much better. You wouldn’t be wrong to assume that for a story this big, Marvel might pull out one of their big artistic guns, but instead, they found Andy MacDonald, who is decently talented but in this issue feels hurried and unpolished. Fortunately it’s boosted by the always-superb Jordie Bellaire’s colors, but MacDonald’s tendency toward exaggerated gestures and expressions leans too far into Duggan’s less-than-serious script. I feel he would be better suited to a comic that’s actually intended to be light-hearted, such as West Coast Avengers. 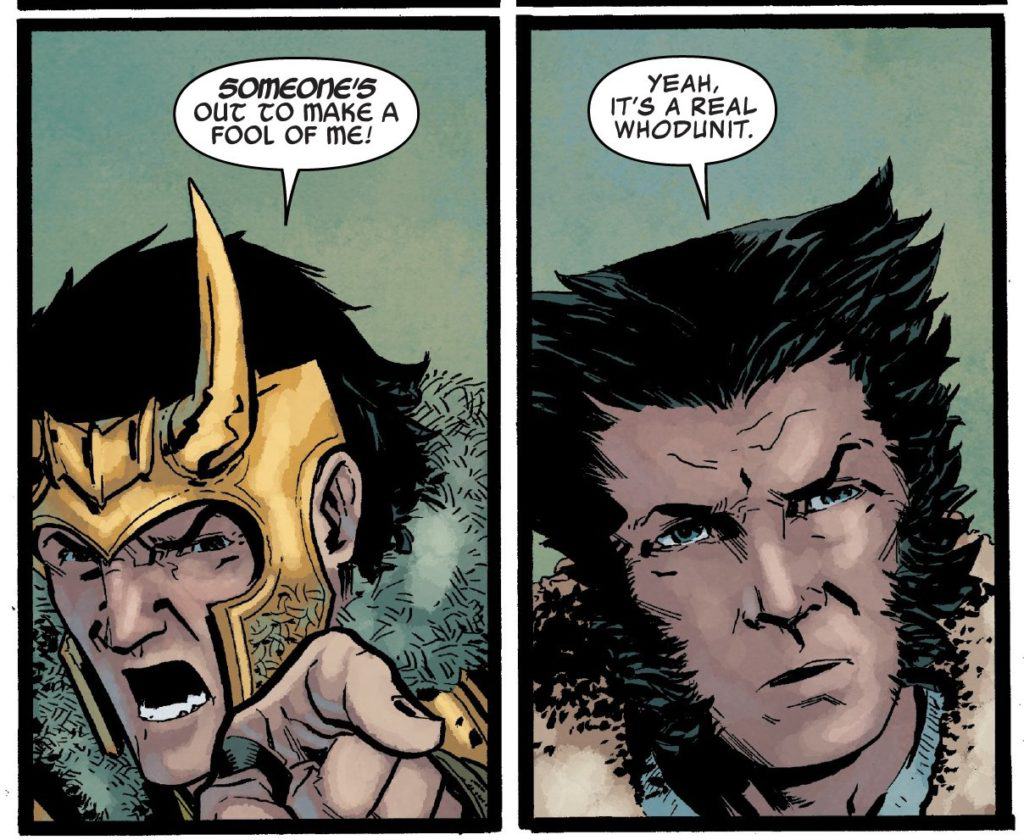 This ain’t supposed to be a sitcom, folks.

It might be easy to read the review and assume I don’t care for Duggan, or even MacDonald. This couldn’t be further from the truth – I respect them both as creators, but it’s an editor’s job to match the right creators to the right project. In choosing a writer with a more light-hearted tone to their style, editor Jordan White has made the mistake of simply putting the wrong writer on the wrong project. The (real) return of Wolverine should be rife with the seriousness and gravity the character deserves – not squandered with such a misguided and atonal approach.

Wolverine is done a disservice in this off-center attempt to give him a role in the wider Marvel Universe. Continuity wonks may flock to it, but readers looking for a rip-roaring Wolverine yarn (IN SPACE!) are bound to be disappointed by this comic that barely takes itself seriously.