Wonder Woman #776: I am the Faerie Prince 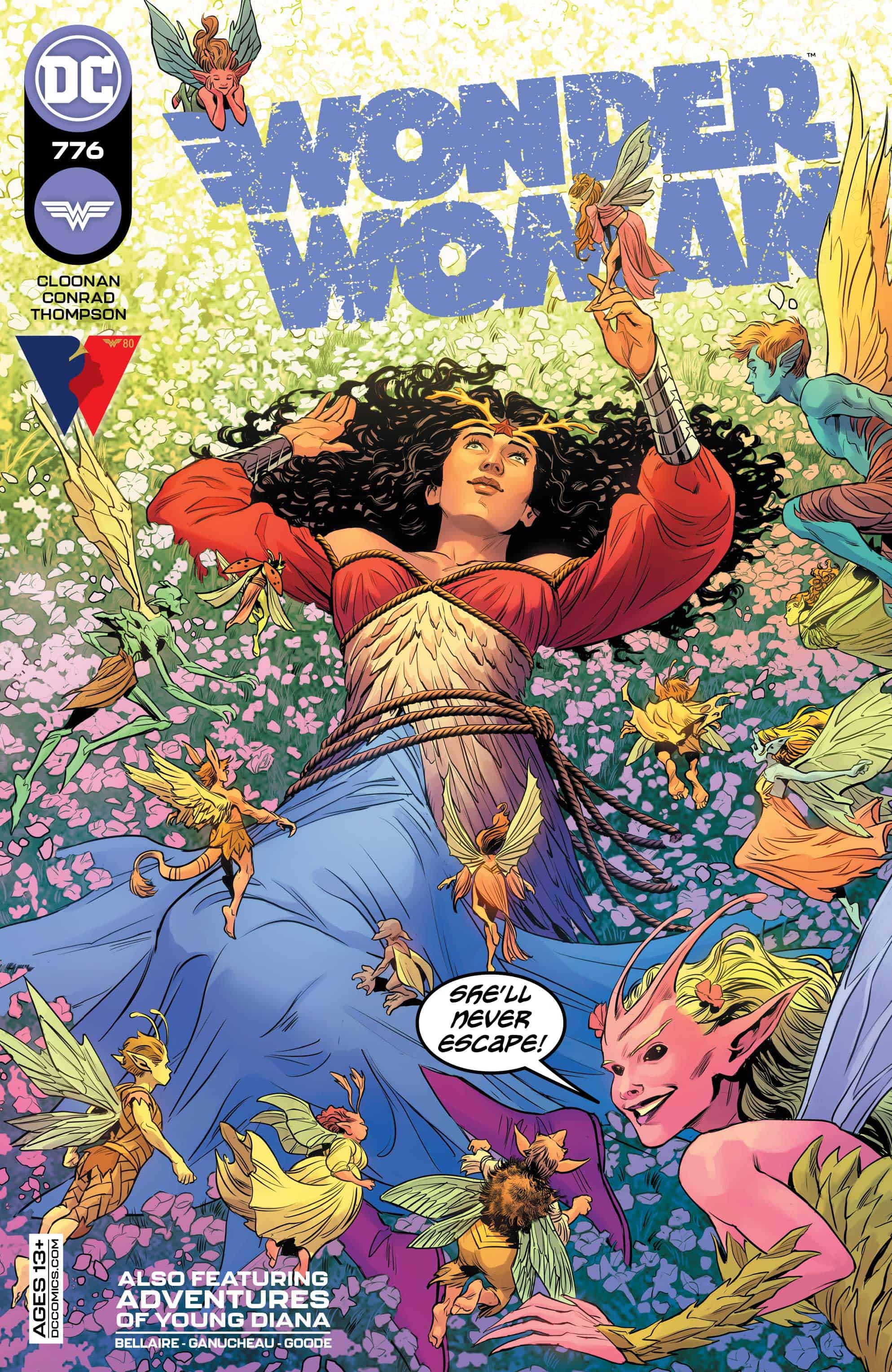 They may look innocent, but the faeries of Elfhame have it in for Wonder Woman!
What did Diana do to incur their wrath? Well, it may have something to do with the Roman god who has turned the Sphere of the Gods upside down in pursuit of power. Someone must pay for the damage they’ve caused, and Ratatosk could be the first if Diana doesn’t find him in time!

Back on Themyscira, in the days of Diana’s youth, the missing historical texts are close to being completed, but at what cost? Is knowledge of the Amazons’ past worth all this trouble? Find out as the culprit behind it all reveals themselves and shares a truth that will change Diana’s childhood forever! 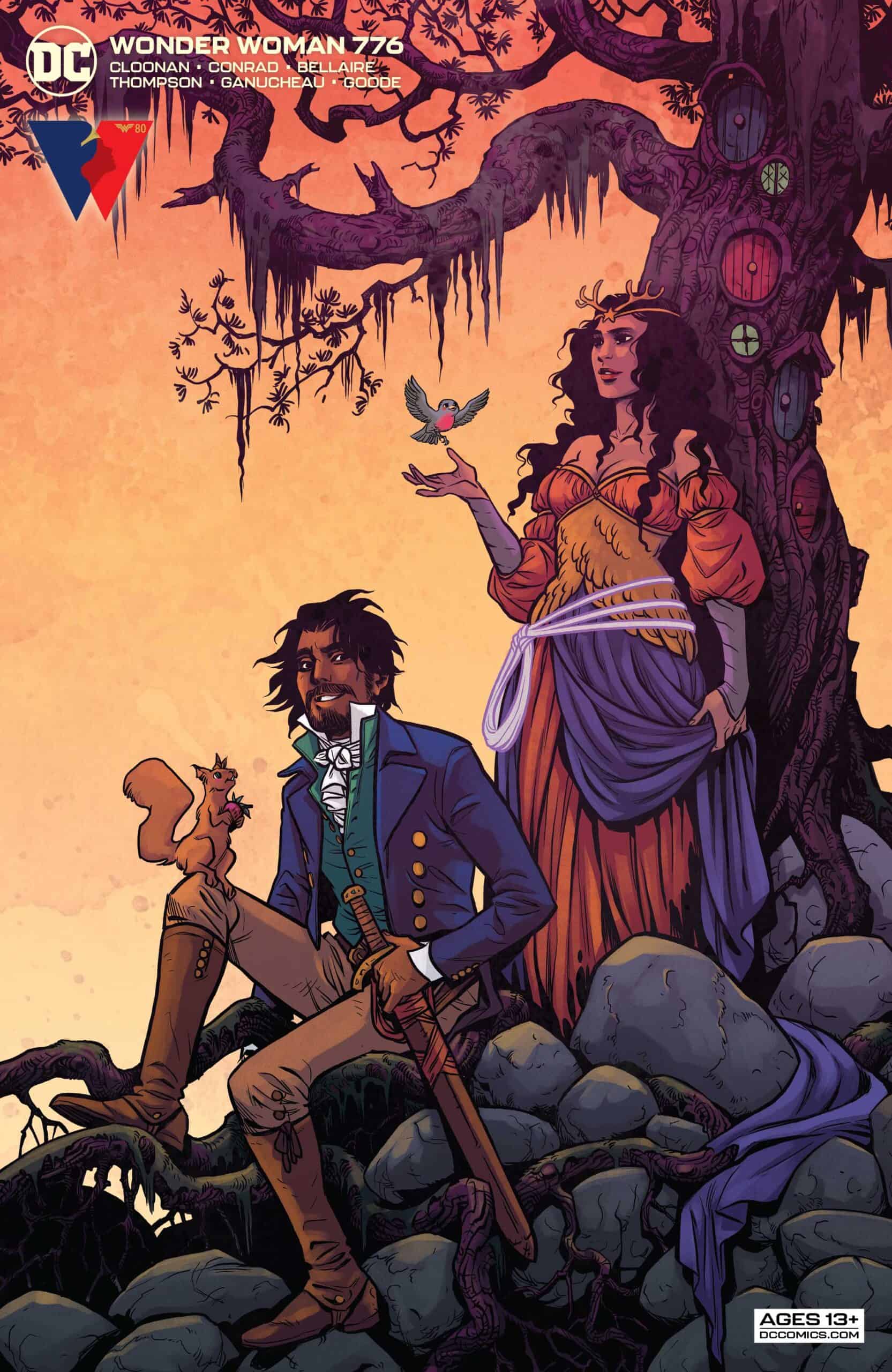 We’re now on our 7th issue by the new writing team of Becky Cloonan and Michael W. Conrad, and I’m just loving it with each passing chapter of this magical mystery tour of the mythological netherworld. This issue we see Diana and Ratatosk in the land of faerie, and the high jinx they get into as they continue their search for the goddess Janus, who appears to be at the center of everything that’s going on.

Ratatosk gets himself into a bit of trouble, and as of straight out of a scene from Alice in Wonderland, eats an enchanted treat and transforms into a human boy with a small horn coming out of his forehead. Ratty befriends some earth children who are being held captive while Diana and Siggy have their own little side adventure dealing with the Faerie King (he’s almost a dead ringer of David Bowie from Labyrinth). I can almost hear the lyrics to Dance Magic with every turn of the page. 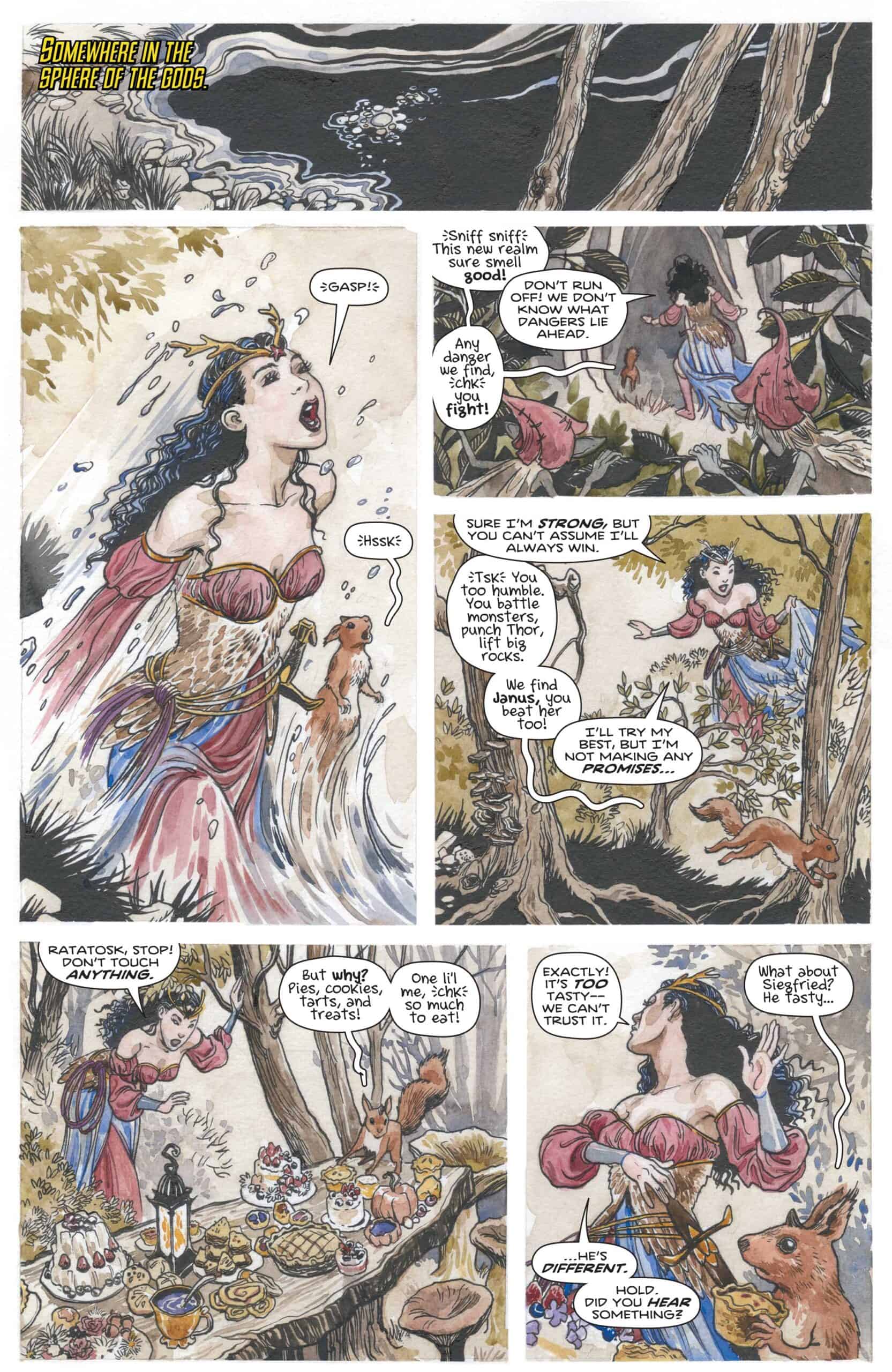 The story is great, and the flow here might be the best issue of this team’s yet. It’s always a joy to see where they take us next, and the new characters they’ve been adding to the Wonder Woman mythology. The team isn’t afraid to take Diana out of her comfort zone by sticking to either the Greek mythological aspect of Diana’s history, or more traditional superhero fare. I love that not everything has to be solved by Diana just throwing hands. The team has been thinking outside of the box, and really showing why Wonder Woman is the premiere female super heroine. 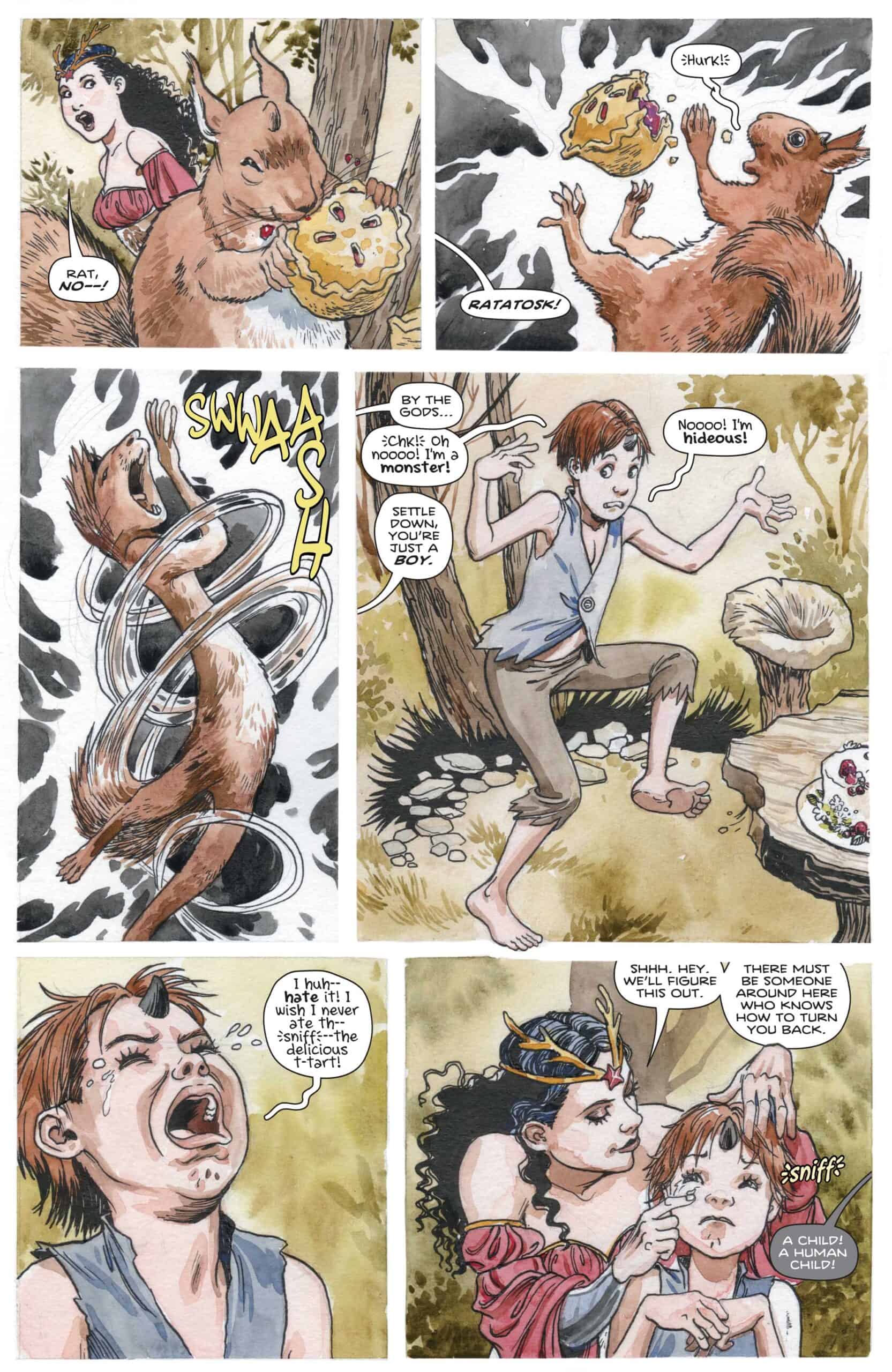 This issue features art by Jill Thompson, and it’s a real treat to see. Jill is Wonder Woman artist royalty, as she returns to the title after having a unforgettable run with the legendary Wonder Woman George Perez in the late 80’s and early 90’s. Thompson’s work mixed with Jordie Bellaire’s softer palette in this issue works magnificently. The art almost reminds me of the original Vertigo series, The Books of Magic, that featured young Timothy Hunter. In the book, Timothy traversed the lands of magic, and jaunted into worlds quite similar to what we see here. 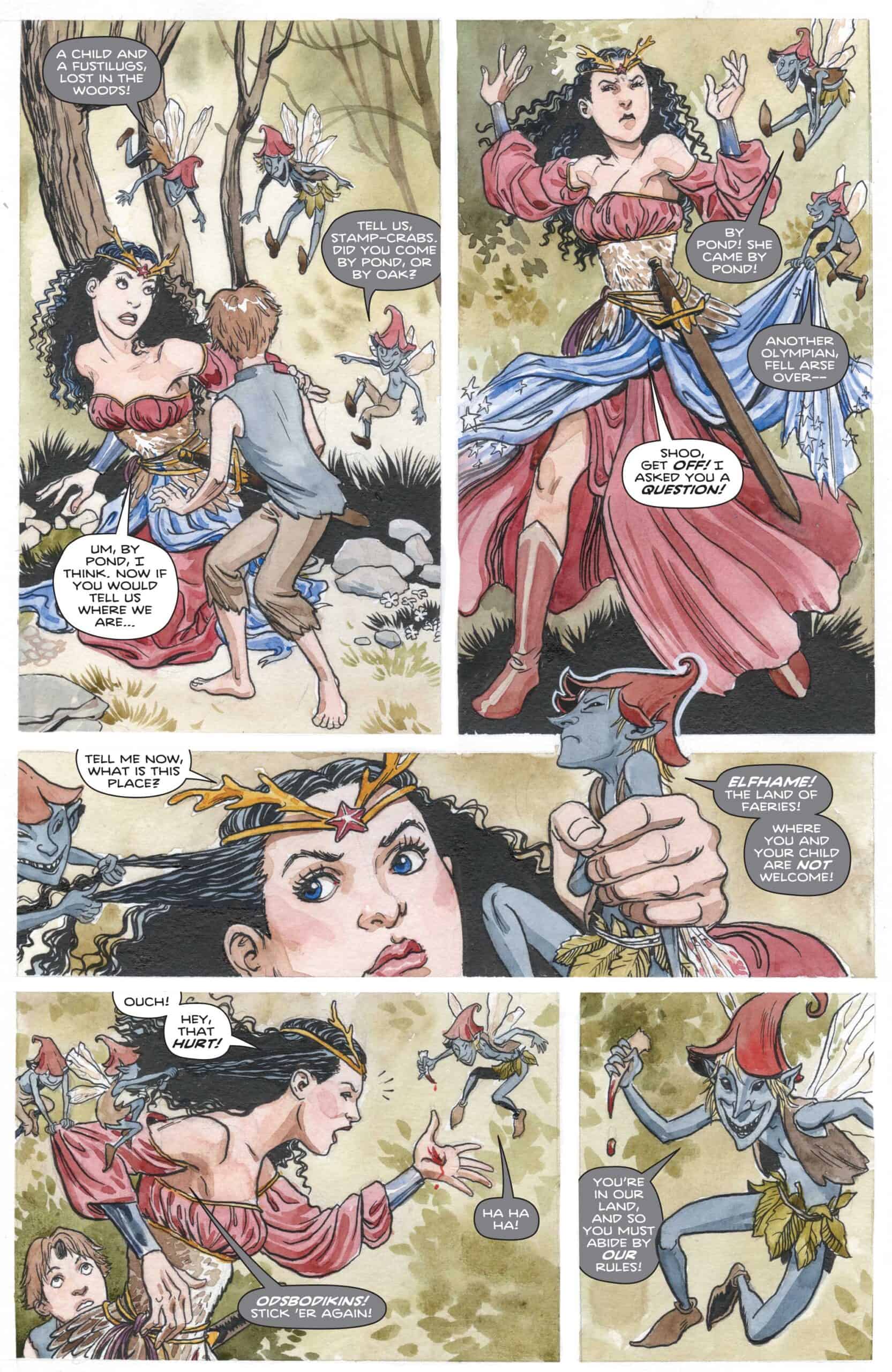 Cloonan and Conrad have created an almost ephemeral and effervescent environment in this issue, adding to the richness that the story has been conveying that the creators have been crafting since the beginning of this run. These two aren’t just here to tell a story, they’re dedicated to building up the world of Wonder Woman, and they’ve been successfully doing it for 7 issues straight. If the team can keep up the level of excellence they’ve brought to this book since coming on, this could become one of the runs that could help redefine who Diana is.


We also get another chapter of Young Diana, from Jordie, and Ganucheau, and it still continues to be a delightful stroll down Wonder Woman’s history, giving us a more modern spin on the more fantastic and silliness that modern comics has grown away from.

We venture down another rabbit hole as we chase Cloonan and Conrad’s run through another dimension for our titular heroine and her companions, Siggy and Ratty, into the land of faerie. The creators are world building a lush, and diverse land for Wonder Woman to venture into, while still remaining true to her roots. The level of craftsmanship, love, and care these two bring is only elevated by the absolute mastery that is Jill Thompson’s art. An issue worthy of a standing ovation.

Wonder Woman #776: I am the Faerie Prince