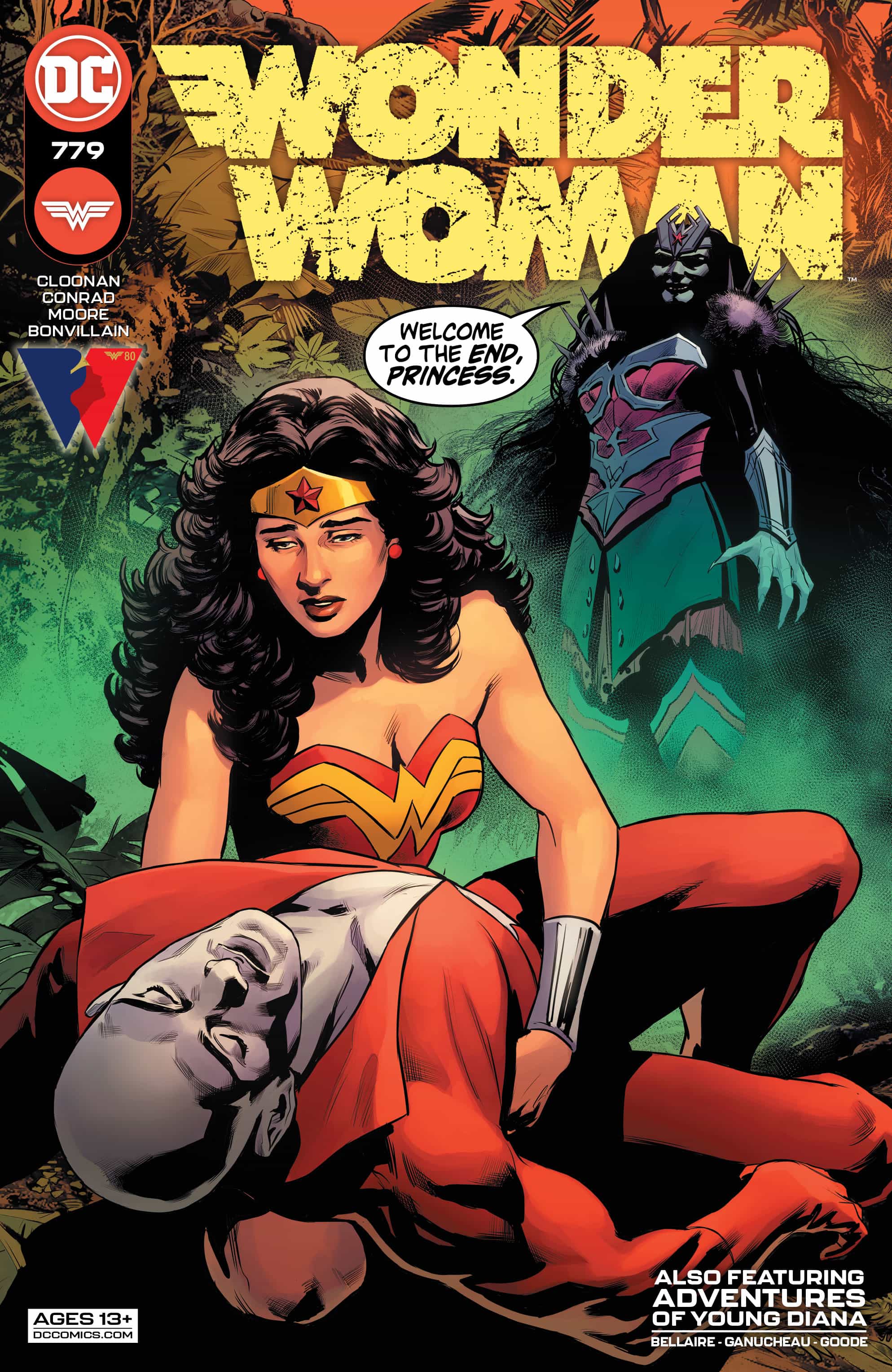 All good things must end! Janus’s murderous rampage through the Multiverse leads Diana and her allies to a place in between worlds where Wonder Woman will come face to face with her darkest fear...a future without her in it! Plus, in our tale set years ago, Princess Diana's quest for truth comes to a thrilling conclusion! 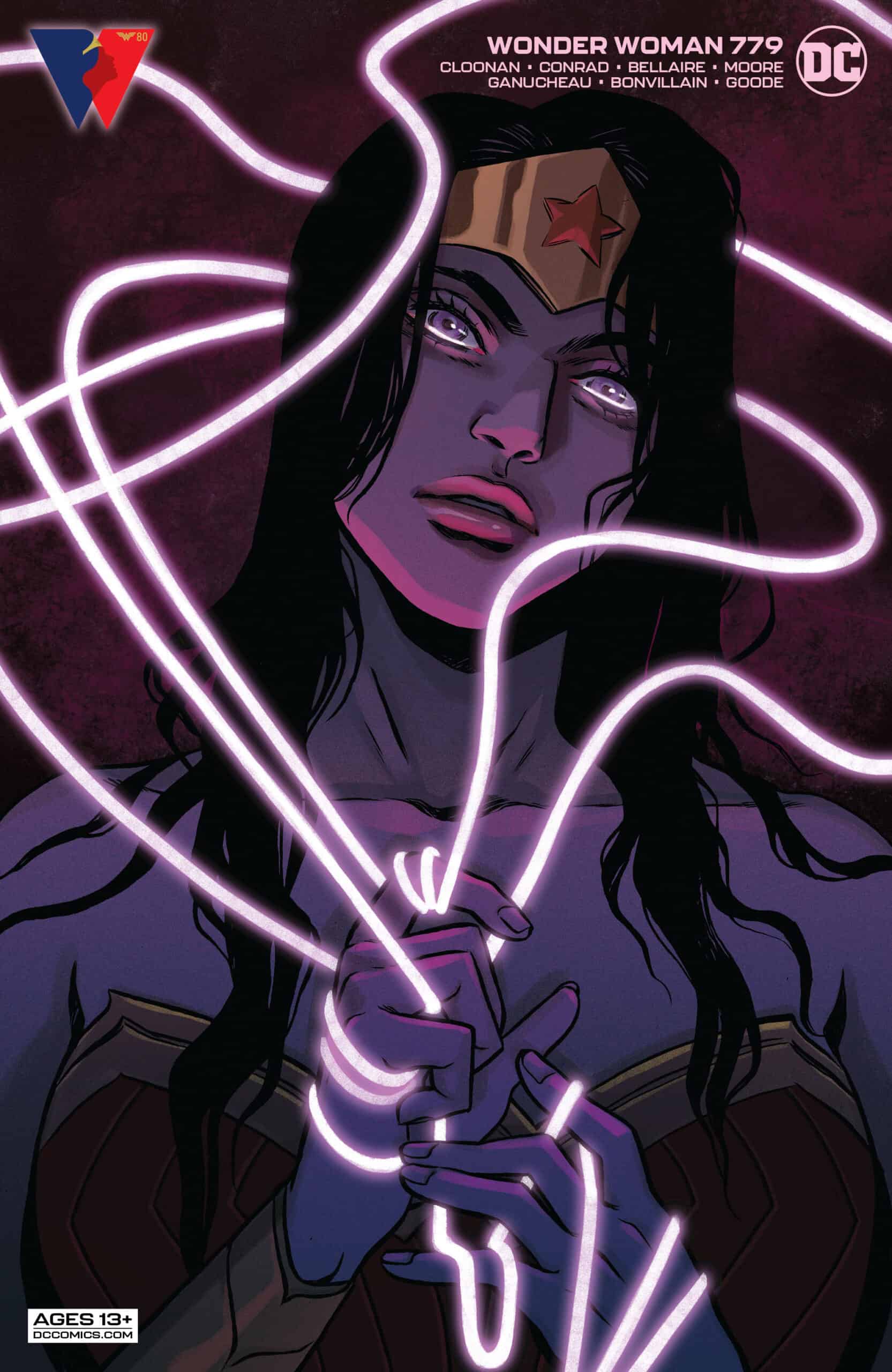 To all things there must come an end, and as with everything else, this chapter in Wonder Woman’s story draws to a close too. In ten issues Cloonan, Conrad and Moore have introduced us to a veritable treasure trove of fun supporting characters like Siggy and Ratatosk, taken us to the shadowy realm of Valhalla, a burnt Olympus, a new lasso that has a whole new set of abilities, something that appears to be a version of Tartarus holding the Greek pantheons souls, the world of faerie, shown us a world where the League’s genders swapped, brought back Wonder Tot and solidified her status of that she’s Wonder Woman’s Fifth Dimensional Imp, and killed Deadman. 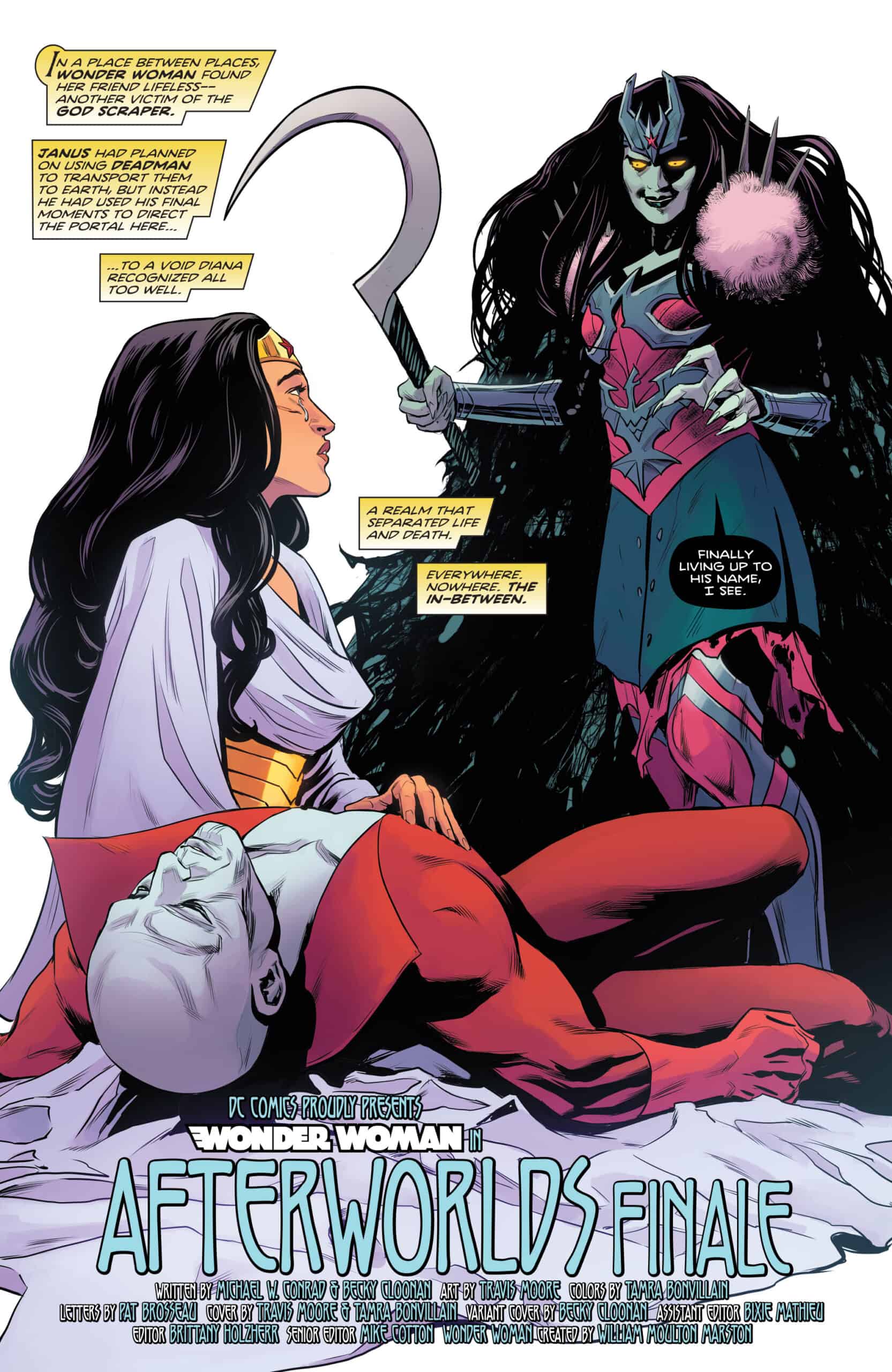 Whew, that’s a lot of story in just ten issues, and this team has kept us eagerly anticipating every new chapter. Cloonan and Conrad have come out swinging, and not afraid to take risks. While there were several complaints about the disconnect between Diana’s way of speaking, which I can agree with, I’m not overly concerned about it because this humanization of Diana is a breath of fresh air. This focus on character development is something this book has needed for quite some time, which for Wonder Woman as one of the Trinity, she’s the only one who seems to have been relegated to a life stuck in amber, while Superman and Batman have evolved leaps and bounds from their post Crisis beginnings. 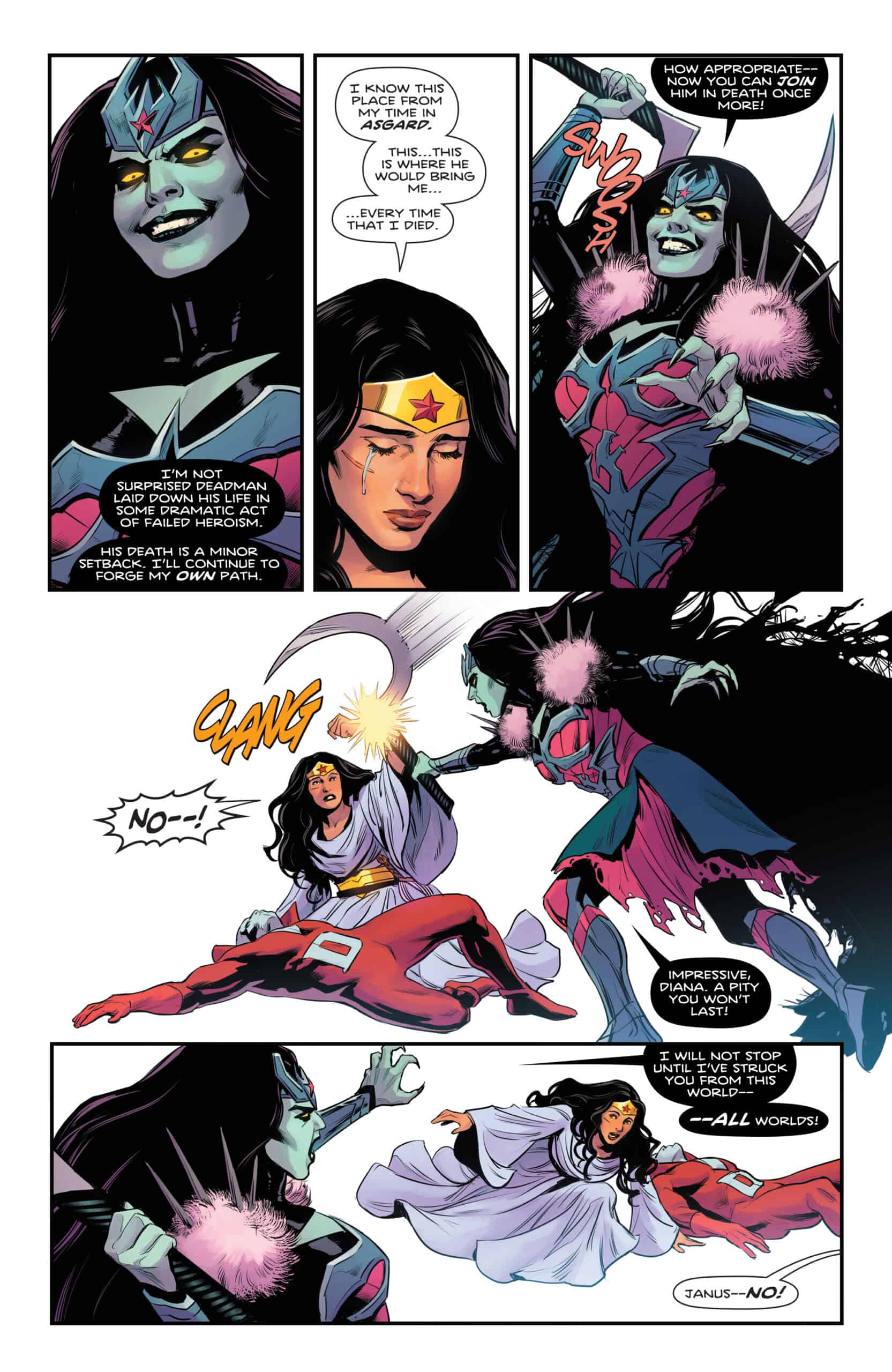 Cloonan and Conrad have also given Diana some new nemeses, in the shape of Janus, the jaded Valkyrior, a Captain Wonder-esque(a pre-Crisis protoplasmic construct of Dr. Psycho’s) character named the Olympian, Charon, and it feels like this is just the beginning for Diana. Cloonrad (as I’ll affectionately address them from now on) also threw in some meta commentary regarding Janus to comic fandom and what they represented. We have the male half of Janus who represents fans who are continually stuck in the past, and wish for things to remain at a constant that they’re familiar with, always looking to the past. Then we have the female half of Janus who represents the fans who aren’t looking to be hampered by restraints on stories that happened decades before. One wished to remain repressive, while the other wanted to burn it all away. Diana came to the realization that neither aspect was the correct one, and there must be a compromise between the two. 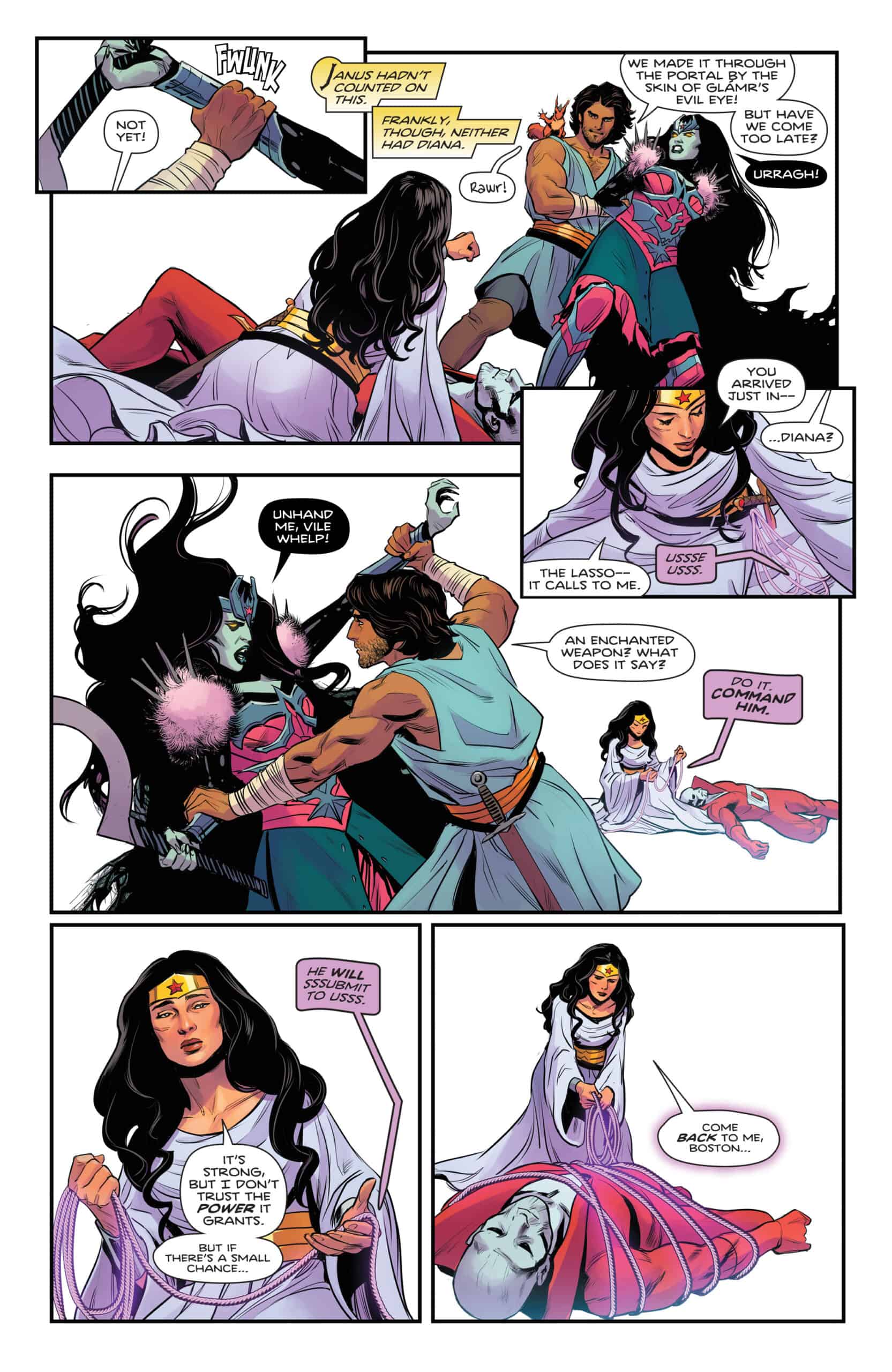 Travis Moore is a dream come true for this book. It seems that artists of Moore’s caliber don’t stick around very long on Wonder Woman’s title before being shuffled off to other, bigger name books or event stories, but it looks like we might have struck gold this time. The characters are immaculately rendered, and full of emotion. He’s one to watch.

The final chapter of Cloonan, Conrad, and Moore’s epic Homeric odyssey through the multiverse, while providing a meta commentary on comic fandom, and the devotion for continuity through the use of the characters introduced in this arc. The dichotomy of Janus’s two sides, and the absolutes that both represent, are tempered when they’re together. It’s a novel approach to comics as they try to ensure the relevance of the characters, and the cultural impact they’ve given us through the decades of publication.