Wonder Woman #780 Make a hawk a dove, Stop a war with love, Make a liar tell the truth 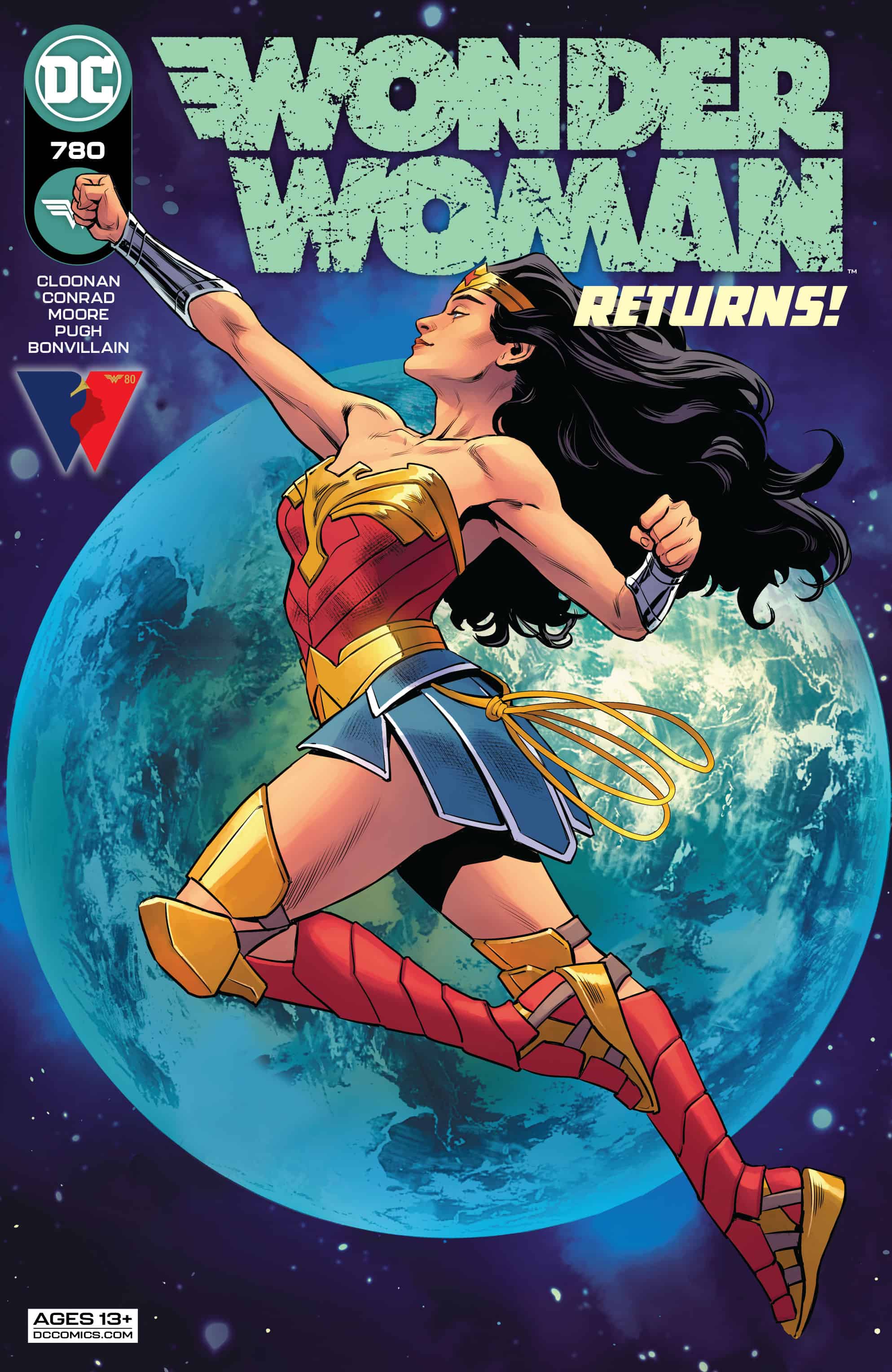 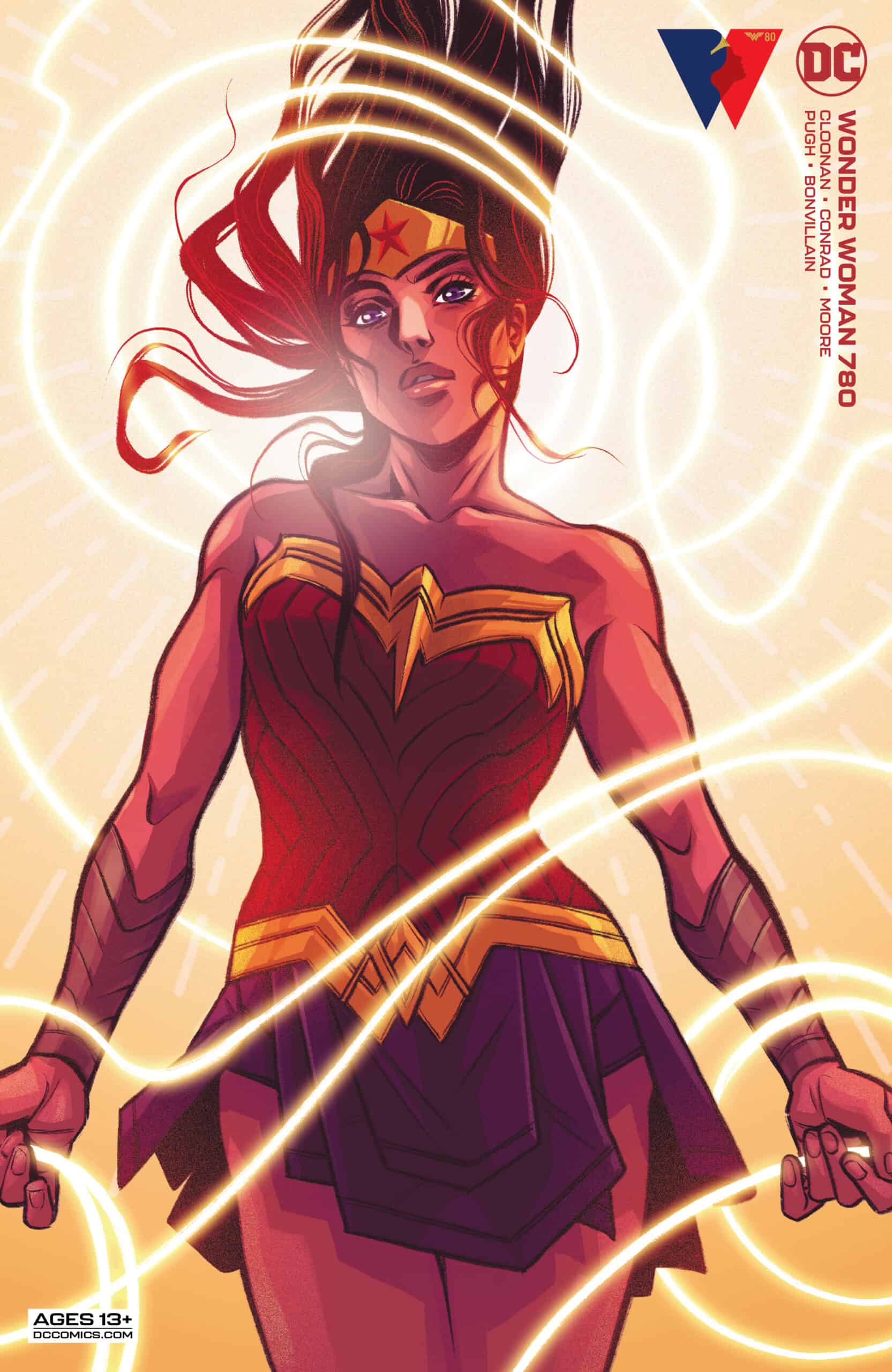 After the events of Death Metal, Diana finally makes it back from her unforgettable odyssey through the Sphere of the Gods! Has the world moved on without her? This special oversize story paves the way to an exciting new future for the greatest hero of them all!

It’s the issue where Earth Prime realizes that Diana is alive and well, and we get everyone’s reaction to the news. Literally. Anyone whose reaction you could want to see makes an appearance here. Even though we see a lot of characters, the majority of the issue is Diana, and her frustration, and elation at her new chance at life. Where we go from here nobody knows. CloonRad continues to show why they’re the perfect team to handle Diana’s adventures at this current moment in her life, and their love of the characters are felt through the pages. There are a couple pages in particular that made me just awestruck. They’re not filled with fights, or lofty speeches, they just capture the essence of who Wonder Woman is, and why I will always love Wonder Woman. She continues to inspire me to be the best version of myself that I can be. 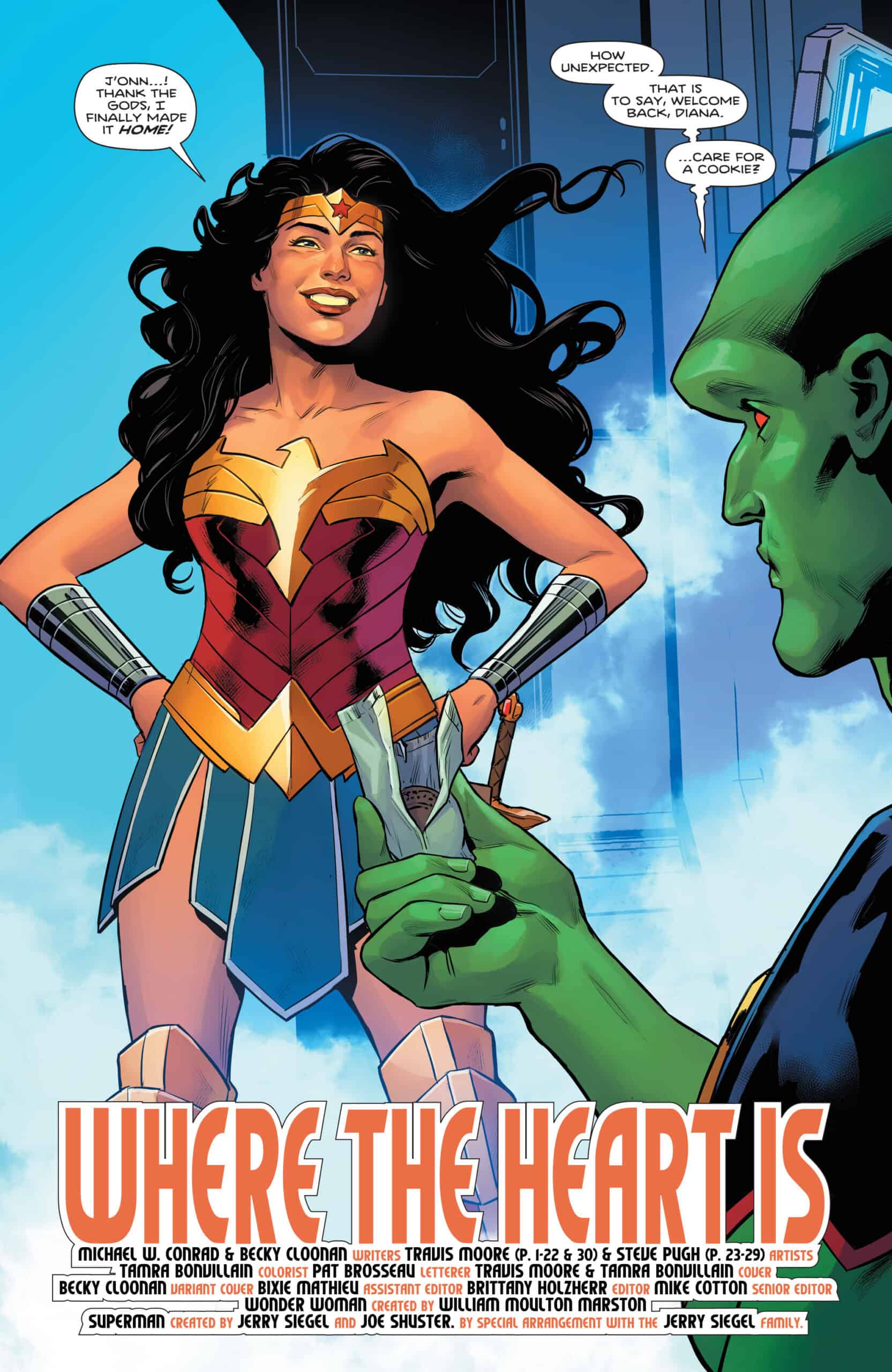 There are lots of moments that continue to humanize this character, with both Justice League members, as well as her fellow Amazons, Artemis and the Bana Mighdallans, the Holliday Girls (!!!!!!!!!), Steve, Etta, and her extended Wonder family, Donna, and Cassie. There’s even a few panels dedicated to Yara, the new Wonder Girl, but I’m not exactly sure what their relationship is, since Yara’s origin story is still being told in the pages of her own ongoing series. I hope to see the two interact in a much larger capacity than Diana had with the previous two Wonder Girl’s, due to issues with the characters being controlled by two very different editorial groups. Probably the biggest moments belonged to Diana reuniting with her mother, as well as with Nubia, the current queen of the Amazons. The tender moments are a great way to segue into Nubia’s upcoming mini later this month. 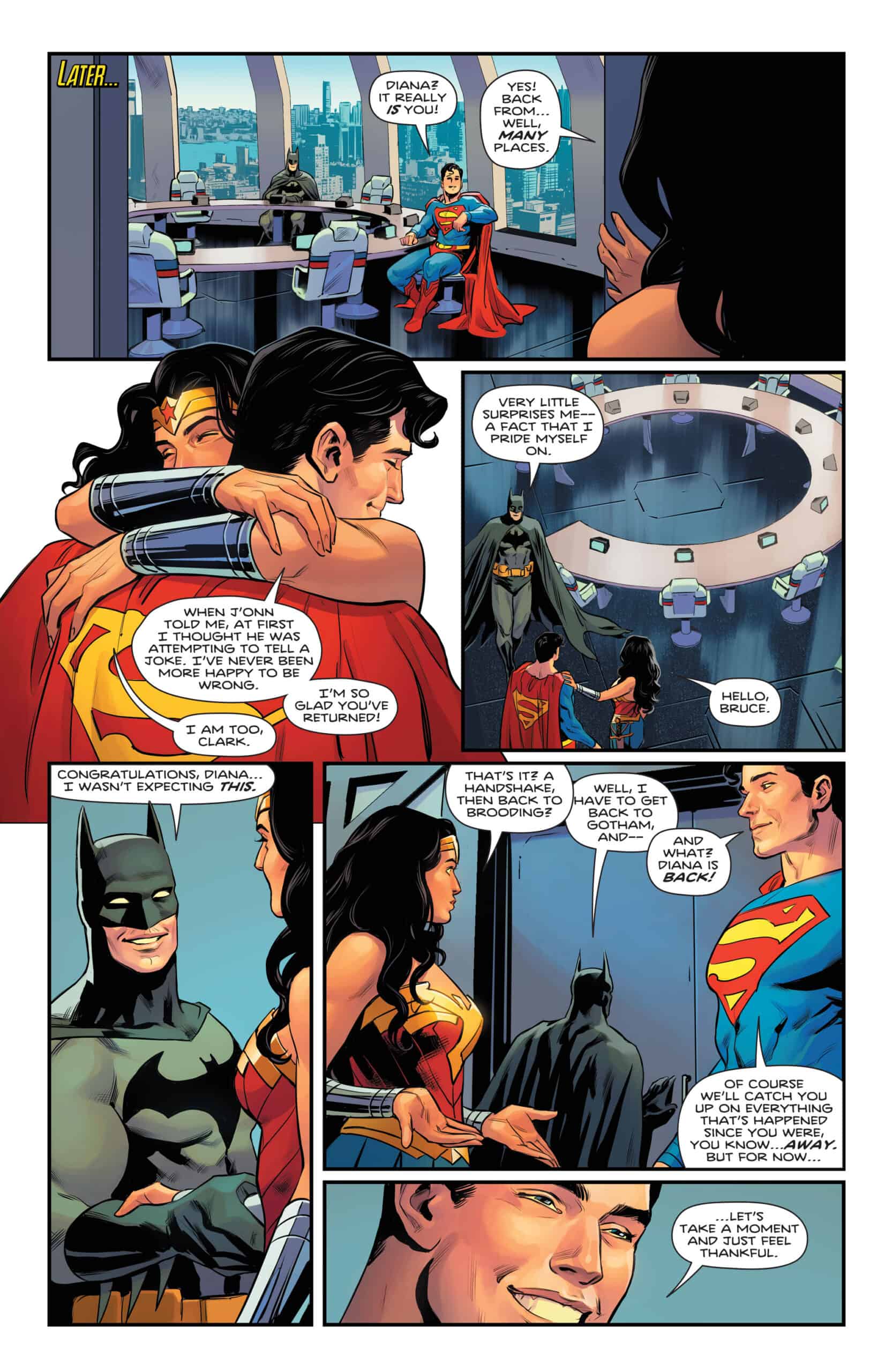 We see Doctor Psycho here again, and he seems to have an unknown accomplice, or even a benefactor, so I’m interested in seeing where this goes, considering how little of an impact the bad Doctor’s showing during the Afterlives mega arc. There’s even a bit at the end that could lead to a pretty obscure Wonder villains return, which if it’s who I think it is, I am super excited about the opportunity to see them again (no spoilers on who I think it is…at least until next issue). 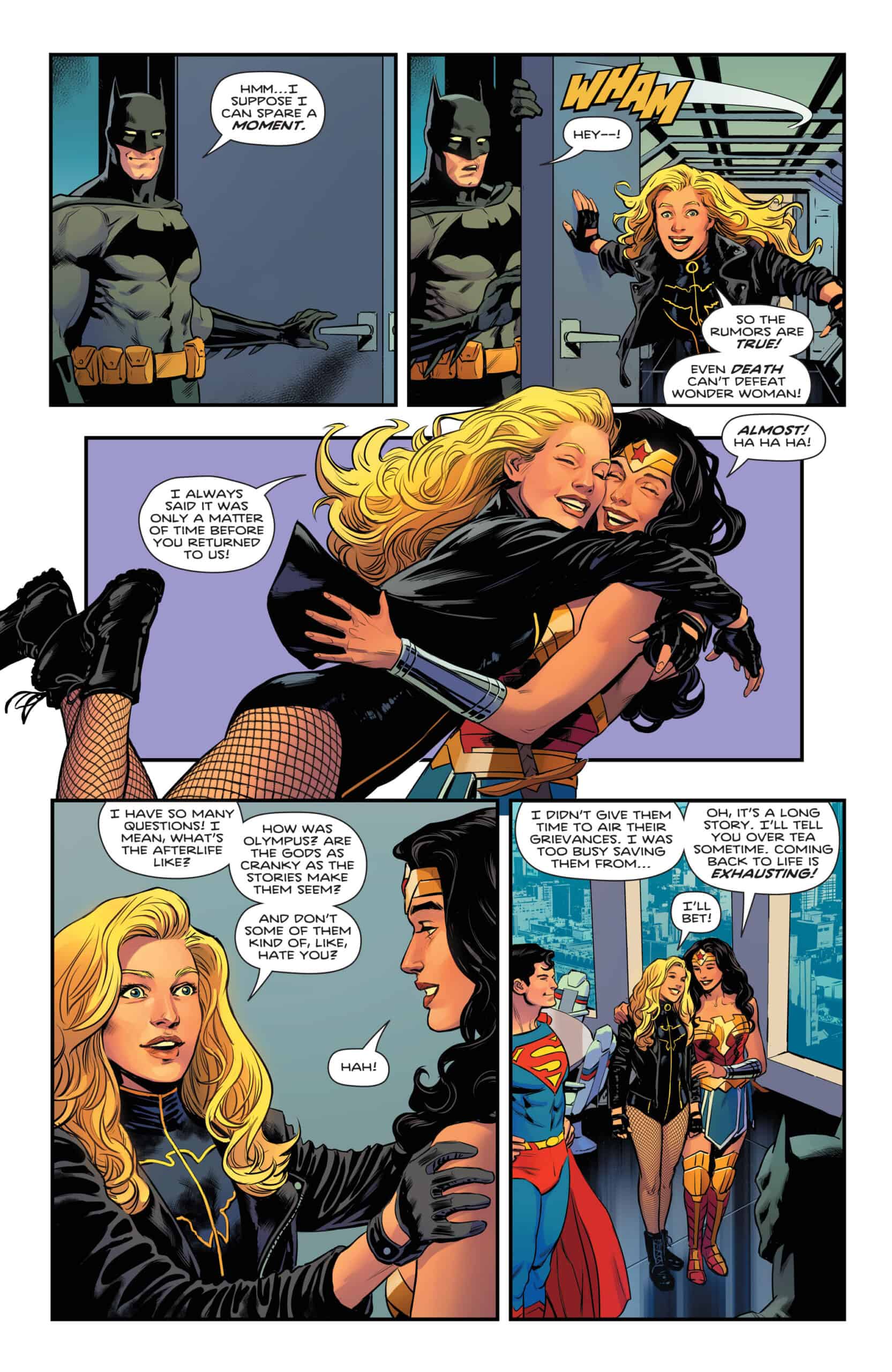 This issue also has Travis Moore and Tamra Bonvillan back (with an assist from Wonder Woman alum Steve Pugh) to finish the afterword of the Afterlives arc (I’m trying to be witty so bear with me), and every panel is an example of what perfection should be. Diana, her Justice League companions, Donna and Cassie, to Nubia, everyone looks amazing here. If DC can keep this team on this book for more than just an arc or two, they could become one of those artists whose names become synonymous with Wonder Woman artistic excellence. While it doesn’t look like Travis will be here for the next arc, we will be graced with Xermanico and Marcio Takara in his place, so there won’t be a shortage of absolutely amazing artwork coming our way.

After sacrificing herself to save everything (because that’s what heroes do), it’s the end of the months long adventure in various Multiversal afterlives for Wonder Woman, and the team lets Diana reconnect with some very important pieces of her life. Cloonan and Conrad continue to show why they understand Diana; she’s an inspiration for the whole world. Much like Superman, Wonder Woman is the epitome of the very best of us.

Wonder Woman #780 Make a hawk a dove, Stop a war with love, Make a liar tell the truth