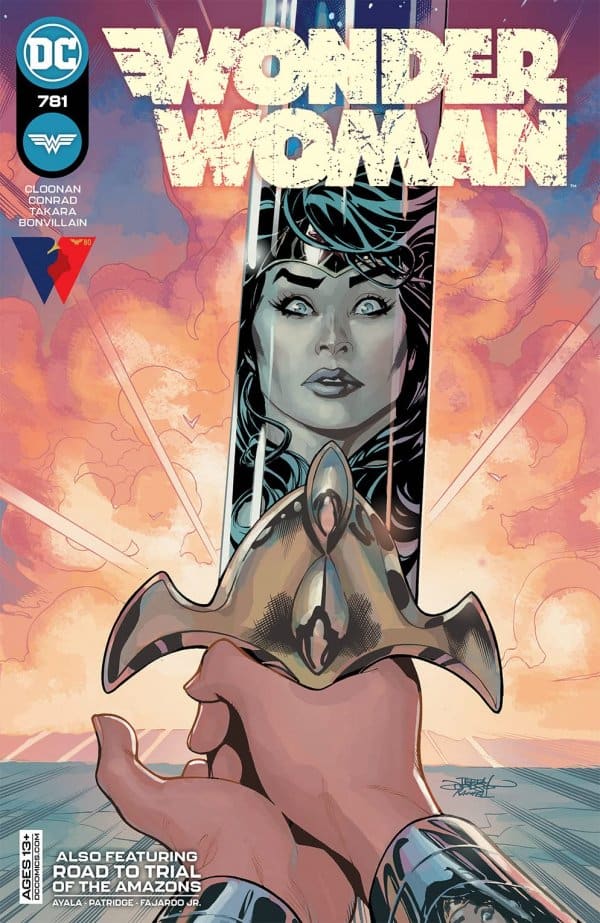 Wonder Woman faces her greatest threat yet: a world that doesn't need her! Lost and without purpose, Diana travels to visit an old friend looking for answers. Meanwhile, her image as a hero has taken a shape all its own and it's ready to fight back…literally!

I don’t think I can express in words how exciting Becky Cloonan and Michael W. Conrad’s run on Wonder Woman has been for me so far. Ever since Greg Rucka left the series, the title has felt directionless, with no creative team staying on for more than a handful of stories. But Cloonrad (as partners Cloonan and Conrad are affectionately known as by the Wonder Woman fandom) has brought Diana back to the forefront. And just in time for her 80th anniversary! 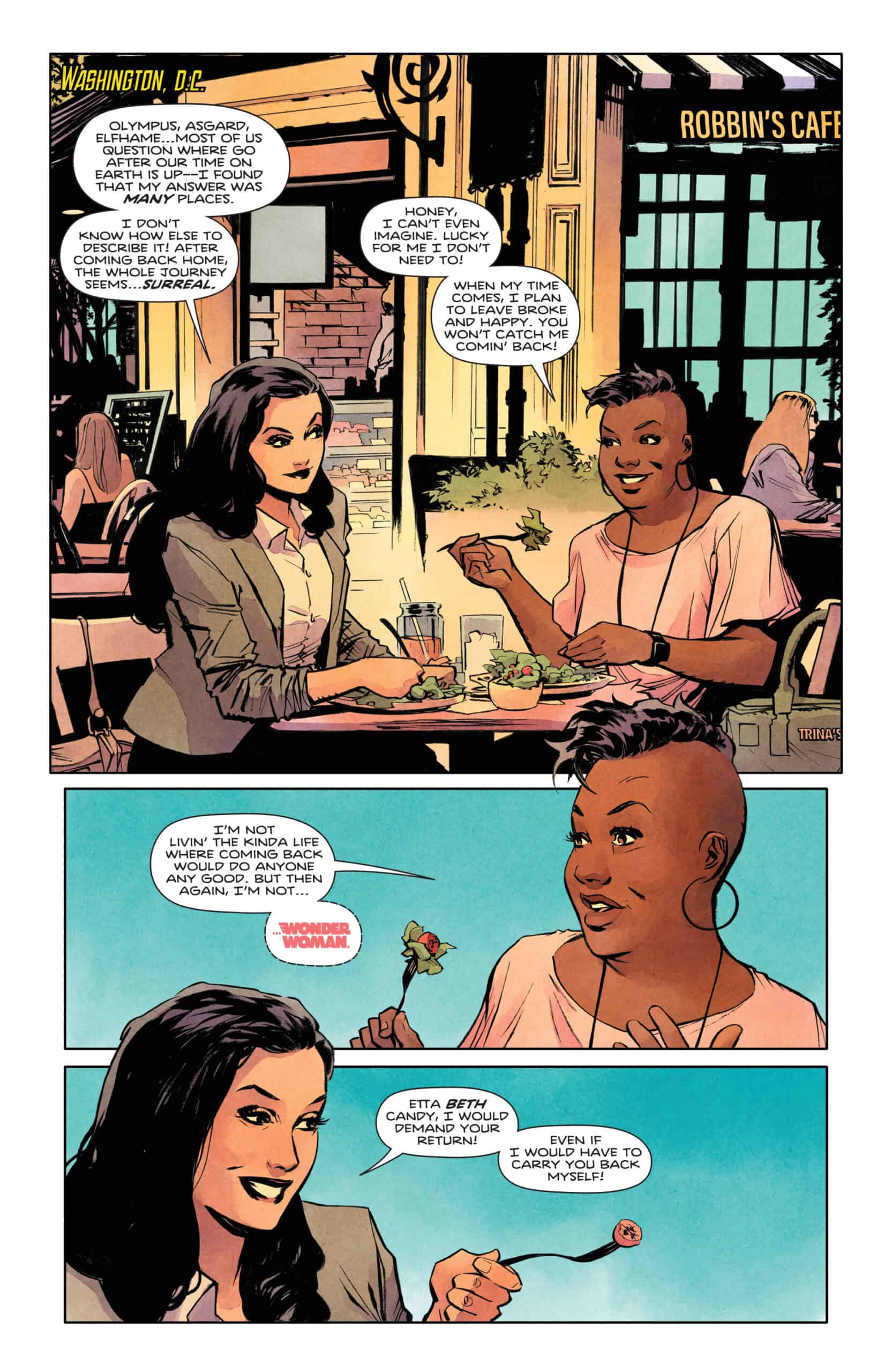 This issue opens with a lunchtime chat between Diana and Etta Candy. I’m thrilled to see Etta depicted as fun and sarcastic. Rebirth has been very kind to most of Wonder Woman’s cast, but I found the new version of Etta to lack the boisterous pluck of the original Golden Age version. Cloonrad, however, show the lighter side of Etta and I love it. We’ve also rarely seen Diana and Etta interact in the past decade, and I live for these little moments where they are able to sit down and chat over lunch.

The story, however, seems to be primarily focused on the men in Diana’s life. She struggles with reuniting with Steve, and also wishes to gain closure with Siggy. And if that wasn’t enough, Doctor Psycho is plotting something big. The writers are a big fan of Doctor Psycho and it shows, as he steals the spotlight in each panel he’s in. It seems as though Psycho is cooking up a scheme with other men who are tired of a “woke” society. It’s a great direction for a storyline which hasn’t really been explored in the main title. Grant Morrison’s Wonder Woman: Earth One attempted this to mixed results. Stories like these are tricky, and I’m really impressed that DC is willing to go there. We’ll have to see if the story lives up to its potential, but I have the utmost faith in Cloonan and Conrad.

While talking about Doctor Psycho, his run-in with Wonder Woman was brilliantly executed. From him staring at her breasts like a complete creep to Diana’s slightly Marstonian threats, the whole scene left me very excited for their ultimate confrontation. 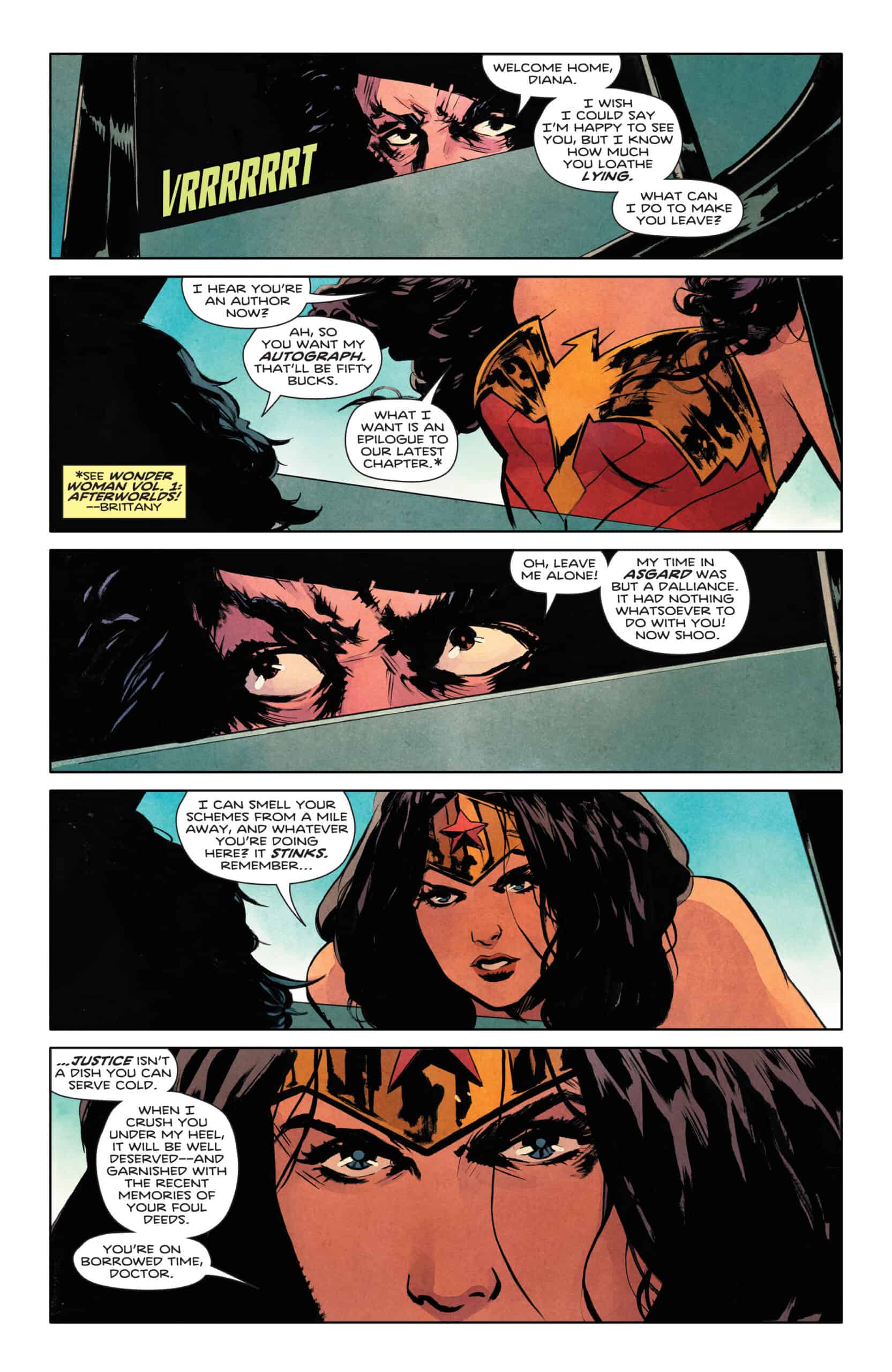 The rest of the story involves Wonder Woman trying to gain closure by putting Siegfried’s sword near his resting place. She recruits Deadman to help her in this task as she is putting off seeing Steve until she feels comfortable. I’ve enjoyed Deadman’s presence in this run; it’s important to have a few strong male characters represented in this title as beyond Steve Trevor and Doctor Psycho, and maybe sometimes Ares, Wonder Woman’s supporting cast and rogues gallery is almost entirely female (which has always been one of the Wonderverse’s strengths, don’t get me wrong). I’m also anxiously awaiting Ferdinand’s return to the series.

The issue does end in a cliffhanger, and if anyone has read the solicitations for the upcoming issues, you know that a very, very deep-cut villain is about to show up which I’m very excited for.

As for the art, Travis Moore is a hard act to follow but Marcio Takara is off to a fantastic start. There are a few shots where I thought Diana looked slightly too young, but there were others that took my breath away. One shot of Diana on the plane with Deadman looked like the spitting image of Lynda Carter which I adore. I’m also saying it now: Takara draws the best Doctor Psycho in the history of Wonder Woman comics. His visage spews hatred and misogyny; the meanest Disney Villain out there would be jealous. I was gutted to see Moore go for now, but Takara’s Doctor Psycho is a great consolation prize just on its own.

There’s also a backup story by Vita Ayala and Skylar Patridge (with colors by the legendary Romulo Fajardo Jr.) which begins setting up the Trial of the Amazons. I didn’t love this mostly because we just got a fantastic introduction to several new amazons in Nubia and the Amazons, including the first ever (confirmed, at least) trans amazon. Still, it’s always nice to see the Banas, and Patridge’s art is stunning as we get to see a wide array of diversity on display. The story ends with a vicious manticore attack which promises to be exciting.

Cloonan and Conrad, now joined by Marcio Takara, continue bringing their A-game to Wonder Woman. This issue sets up several storylines while never losing my interest. And when Doctor Psycho is in the mix, you know you're in for a good time. I'm strapped in for the long haul as this is the most exciting the Wonder Woman title has been since 2017.