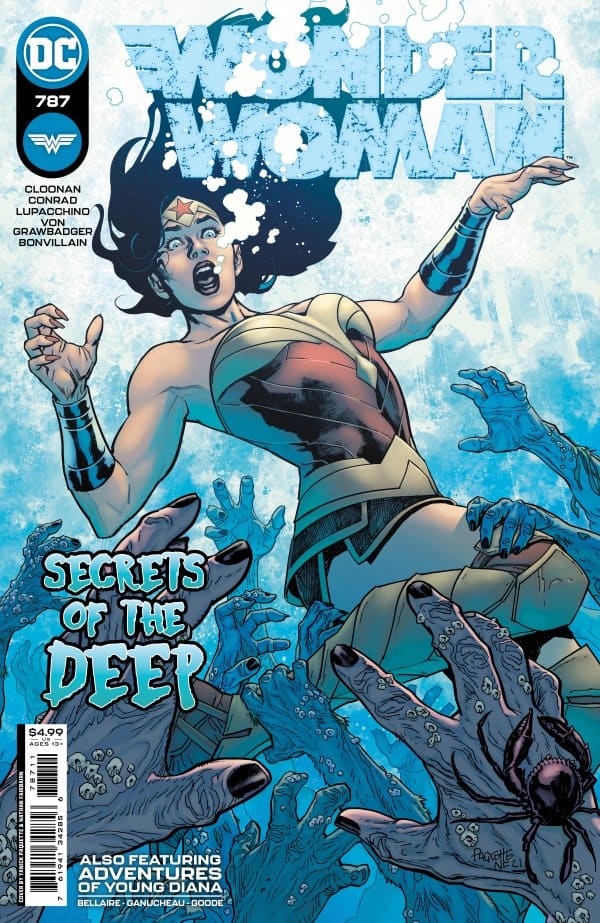 Spinning out of "Trial of the Amazons…" What lies in the treacherous waters surrounding the island of Themyscira? Wonder Woman takes a deep dive into her culture looking for answers to Altuum's claims of living in paradise before the Amazons ever arrived at the request of the gods. Could the legends told in her childhood all be lies?

It comes with a heavy heart as I do this review for Wonder Woman, as we all mourn the passing of George Perez, who is almost as important to Wonder Woman as Moulton is, I’m sure if they were real, they’d be celebrating his life on Themyscira as a hero. Rest in power, George. You were both incredibly talented, and immensely kind. A trait that many lacks unfortunately. You were a Titan among men.

Today’s issue is the first chapter of the Wonder Woman saga after “The Trial of the Amazons,” and it’s an issue full of setting up this new journey for Diana and her world. We get to learn a bit more about Altuum, and watch Siggy get to know the world of the 21st century. Conrad and Cloonan continue to pump each issue with as much personality and charm as possible, with each new chapter getting a new artistic cohort to help breathe life into the world we’re in. Bringing Siggy to the current world is going to be loads of fun for this team to give us some hilarious hijinks as he deals with modern day civilization, and how he has to acclimate to our norms. Not only this, but the potential that comes between Siggy, Diana, and Steve will be loads of fun. Sure, since the New 52 Diana and Steve have been this ages long love affair, on the same bar as Lois and Clark, so seeing this new wrench, and what it could mean to the dynamic we’ve had over the last decade. Fun stuff to come. Not to mention the culmination of the subplots that they’ve been cultivating since their very first issue.

With this issue we get Emanuela Lupacchino, and like every other time she’s been on this character, it has been an absolute delight. Her figure work, especially with that of Diana, is one of power, femininity, strength, love, compassion, and depth, qualities that should always reverberate with every panel Diana is in. Diana is one of the greatest and complex characters in not only comics, but of all literature, age Em’s depiction of her and her world captures the sense of magic and awe that is Wonder Woman. Having Lupacchino among the roster of artists we’ve had this run just shows the level of commitment that DC has for this team, and the success of this title. I know I say this with every new artist that has come along, but with ELup, she is a proven artist with Diana, and the more of her we get, the better I feel with the issue at hand.

With an end to the trial, we begin this new chapter of Diana’s life, and CloonRad are hell bent on making this next turn in Diana’s life as exciting as possible. Whether that be with Siggy, and Steve, or the villains, both old and new, that they’re bringing us, I can’t wait to see what else they’re going to come up with.