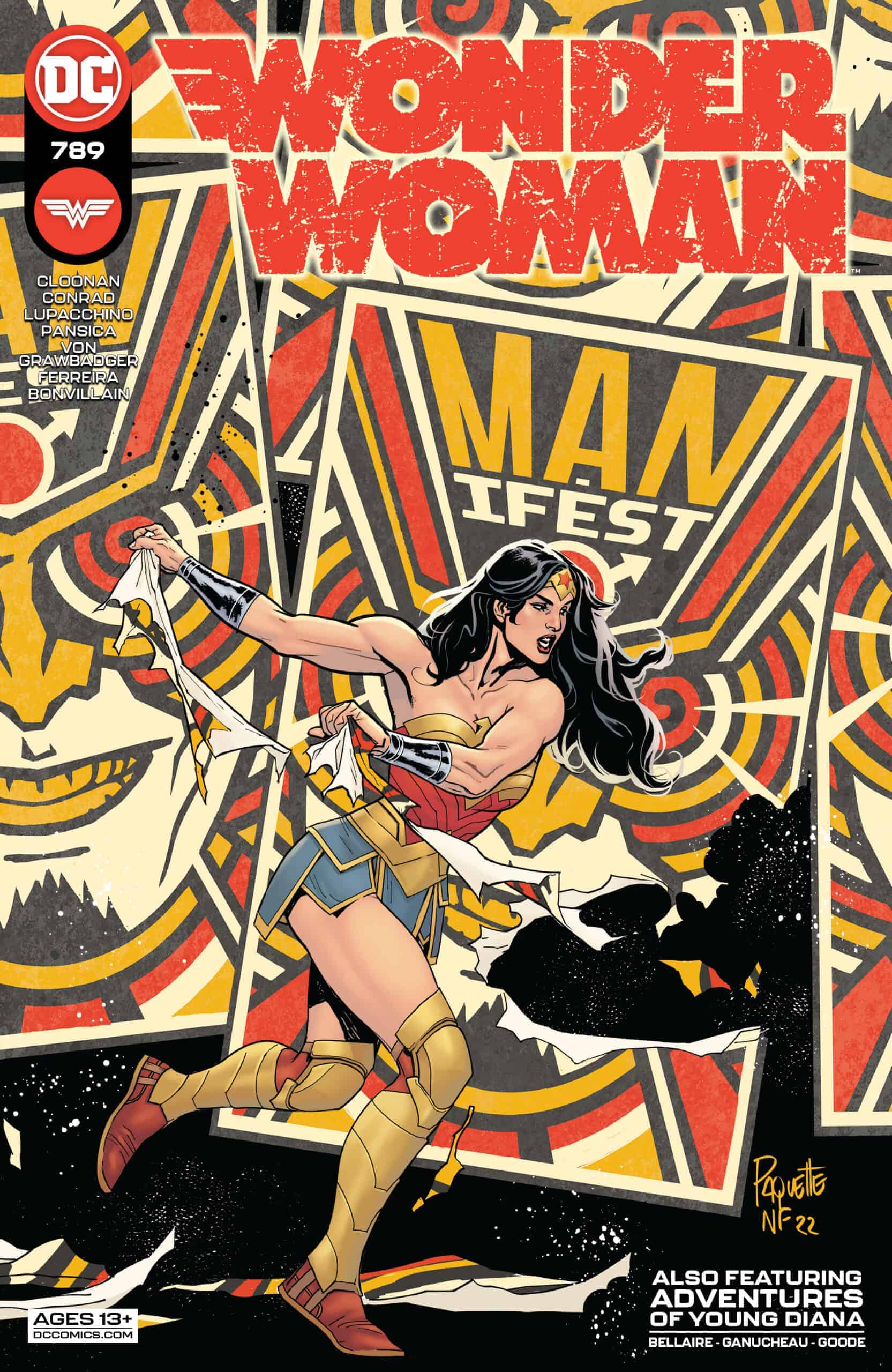 Man-ifest your future! Thanks to Cizko’s new catchphrase, he’s gained fans, and more importantly, soldiers in his war against Wonder Woman. But with Checkmate at our hero’s side, the depraved doctor will have to bring in big guns like…the Duke of Deception! Will this former agent of Ares prove too much for the Amazon Princess? Plus, a growing danger lurks on the island of Diana’s youth in our backup story!

This third entry of “The Villainy of Our Fears” continues the Dr. Cizko’s Villainy Inc. storyline with a new addition to his motley crew: The Duke of Deception. I’m a big fan of the Duke as he’s part of Wonder Woman’s Golden Age legacy, having first appeared way back in Wonder Woman #2 (1942). Throughout the Golden and Silver Ages of comic books, the Duke remained a prominent adversary for Wonder Woman. It wasn’t until the Bronze Age where the villain was shelved and only popped up sporadically throughout the next few decades (including in the spectacular The Legend of Wonder Woman by Renae de Liz).

Here, we see the Duke of Deception tied to the Greek deity known as Dolos, the personification of deceit and treachery. As the character was often depicted as a servant of Ares, this take on the Duke fits perfectly with Wonder Woman’s mythology. Of course, Becky Cloonan and Michael W. Conrad don’t deserve all the credit, as the Duke of Deception was actually mentioned in Wonder Woman 1984 as Dolos. But I love that they brought the aspect of the character over to the comics lore.

However, we don’t much characterization in this issue for Dolos. Instead, we get several action sequences between the Wonder Woman family and the members of Villainy Inc. And you know what? I ain’t mad at it. 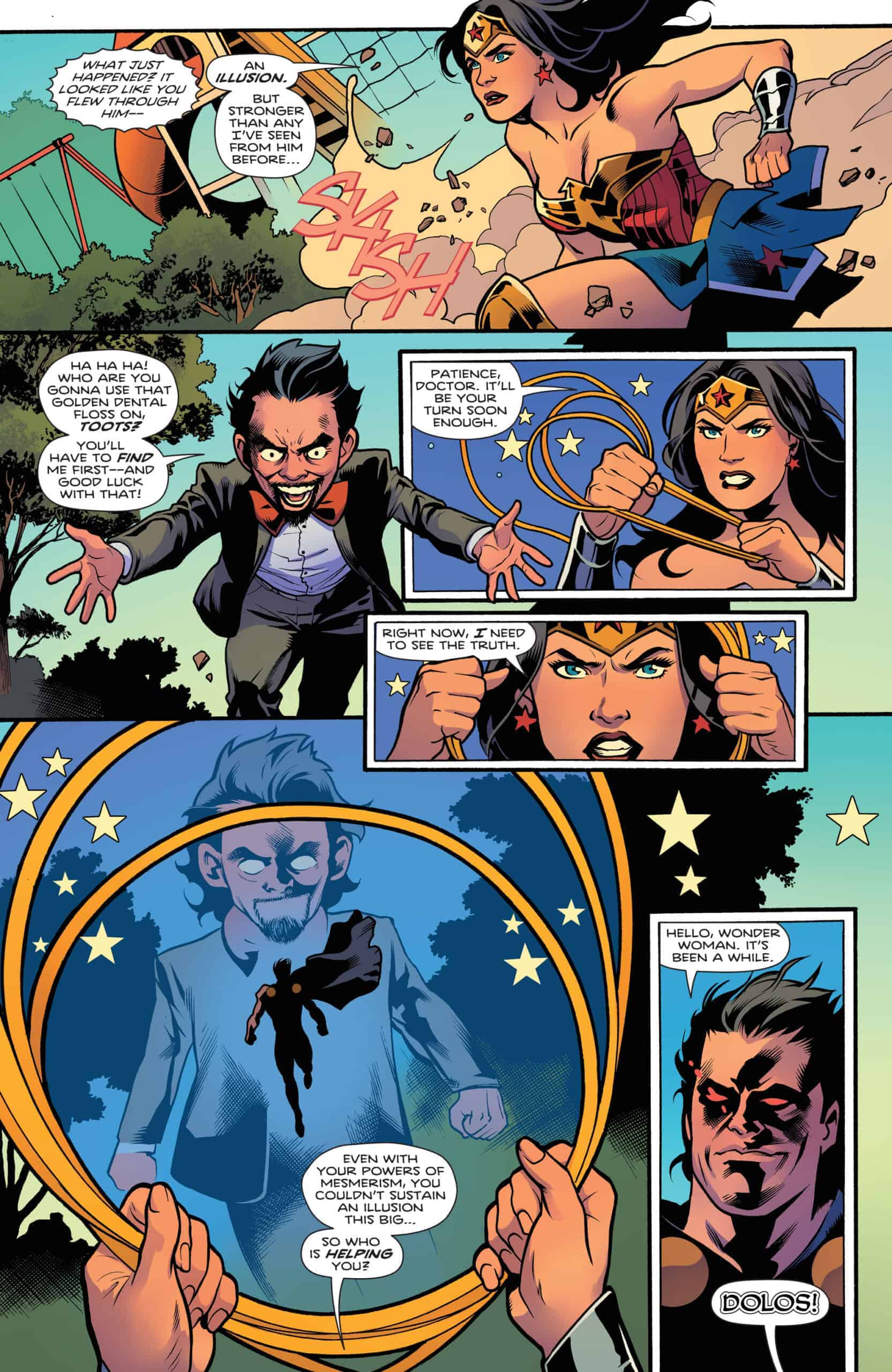 Each of the Wonder Family gets a chance to shine this chapter, with Steve, Siggy, and Etta all confronting Villainy Inc. in their own way. We get a very cool scene with Doctor Poison and the two men while Professor Calculus takes on Etta. I love the nods to Etta’s past at the Holliday College and her history with the Professor. Any time aspects of the Golden Age comics are brought into modern Wonder Woman, I’m filled with joy. There’s a subplot with Sweetheart that I also find very interesting, and I look forward to seeing where her character goes.

Beyond all the action, there’s an underlying plot featuring some very topical issues. Over the years, Cizko has always been portrayed as a loner and outcast. But seeing him rally likeminded men to his cause is a frightening reflection of real world issues. I love that Cloonan and Conrad have the boldness to go there, and DC’s willingness to let them. Wonder Woman isn’t just a comic book superhero, she’s a source of inner strength for many of us.

I’d be remiss if I didn’t mention the stellar art by Emanuela Lupacchino and Eduardo Pansica. Each character is given a distinct look, and everyone looks great. The action reads very coherently and is easy to follow along, which is pivotal in an action-focused issue like this one. I also love that several of Cizko’s “vile milk-drinkers” wear red baseball caps. Another way the comic boldly expresses the core viewpoints and values for Wonder Woman. This comic is so damn great.

I've been such a big fan of Cloonan and Conrad's work on the Wonder Woman title, and this issue proves they have staying power. This level of quality storytelling is everything I hope for when opening a comic featuring the Amazon superhero.