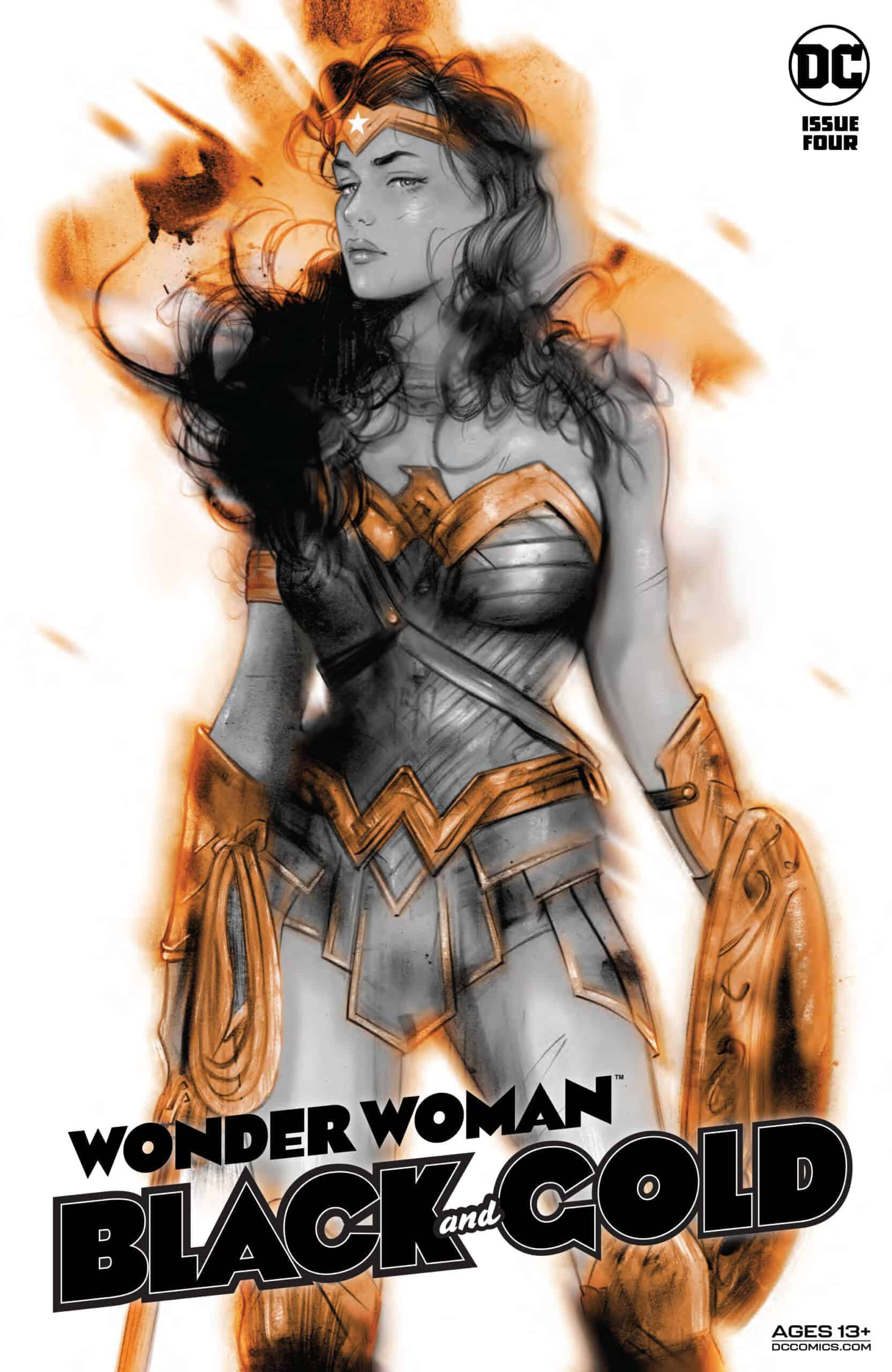 Wonder Woman: Black and Gold is an anthology series with stories by legendary comic book creators that explore the character of Wonder Woman and her themes of female empowerment, all while using a monochromatic color scheme with accents of gold sprinkled throughout.

I’m a lifelong Wonder Woman stan, so imagine my delight when I was given the opportunity to review Wonder Woman: Black and Gold #4!

I admit I was a little surprise that these colors were chosen, as black isn’t really associated with good ol’ Wondy. But the series so far has really found a way to make the black and white color scheme work, with each story utilizing gold accents in innovative ways. As for this issue, let’s go story by story (minor spoilers!):

Nicola Scott is an absolute legend to Wonder Woman fans. Her work in Wonder Woman: Year One is some of the best seen in a Wonder Woman comic. Here, she uses the black and white color scheme to capture a melancholic tone as Diana must put down a feral griffin. Anyone who read Greg Rucka’s Black Magick already knows Scott kills a black and white comic, so it’s not really a surprise that every panel in this chapter is truly stunning.

As for the story, it’s light on plot but very character-driven as Diana mourns the loss of this ancient creature. I was impressed with Andrew Constant’s introspective take on Diana’s feelings of being forced to choose between nature and humanity. It’s something that hasn’t really been done very often, and certainly not this beautiful.

This is a cute tale of a Batman-obsessed little girl who learns that Wonder Woman is rad. There have been a lot of stories in the past focusing on children and gender in the Wonderverse, but it’s usually a young boy who is teased for idolizing Wonder Woman. It was nice to see the opposite presented here, with Lucy being told she can’t be Batman since she’s a girl.

I’m also a huge fan of Wonder Woman’s rogues gallery, so I was very happy to see Giganta here (in her 40’s cavewoman look, no less!). It does bother me that she always seems to just be a giant punching bag for Wonder Woman, and I’m aching for a storyline that takes her seriously as a villain, but for this short story it’s completely fine.

Cathy Perkins is a delightful little character who appeared in the late 60’s and was a relatively minor supporting character throughout Diana’s “Mod Era”. She’s a deep cut, but as a continuity-obsessed fan, I’m elated that Sina Grace decided to bring her in for this story.

In fact, this segment feels very much like a love letter to that underrated era of comics, with a special appearance by a certain villain team that hasn’t appeared in many decades. Seriously, it was so lovely to see these weird and ridiculous characters again. As for Cathy, it’s a little depressing seeing such a lively character face down the barrel of death, but I liked it. I’m not sure I fully buy the resolution, but it’s a nice sentiment. I know I shouldn’t overthink the story, as I really did enjoy it, but I was also left scratching my head over how easy it is to get a magical artifact in this world.

Easily the most bizarre story of the bunch, I found myself really enjoying this one. As I said earlier, I’m fanatical when it comes to Wonder Woman’s villains, especially ones that aren’t regularly used. Here, we have Hypnota channeling a little bit of Doctor Psycho and Zara of the Crimson Flame. A vastly different take on the character, “Hypnota the Guiding Light” is a manipulative cult leader who lures Diana’s friend into her community.

The art is a real highlight for this story. Modern and expressive, MacLean’s style fits the writing perfectly. I can see how some fans might be turned off by the style or think that Diana is barely recognizable, but it wasn’t the case for me. This is a one-off story we’re talking about. I hope future we see more Black & Gold stories revitalize underutilized villains the way this one does!

This is a quick read with not much to talk about other than it’s great to see classic Wonder Woman flying her Invisible Jet. We see a lot of stories about regular civilians encountering the superheroine or being rescued by her. This one doesn’t reinvent the wheel, but it’s fun nevertheless. Setting it during World War II is a nice touch.

Wonder Woman: Black and Gold #4 is truly a treat for any Wonder Woman fan. Get lost in Nicola Scott's gorgeous art, or go on an adventure with Diana to defeat the manipulative Hypnota. Each of the five stories presented here bring something different to the table, giving the reader a slice of various aspects of the Wonder Woman mythos.