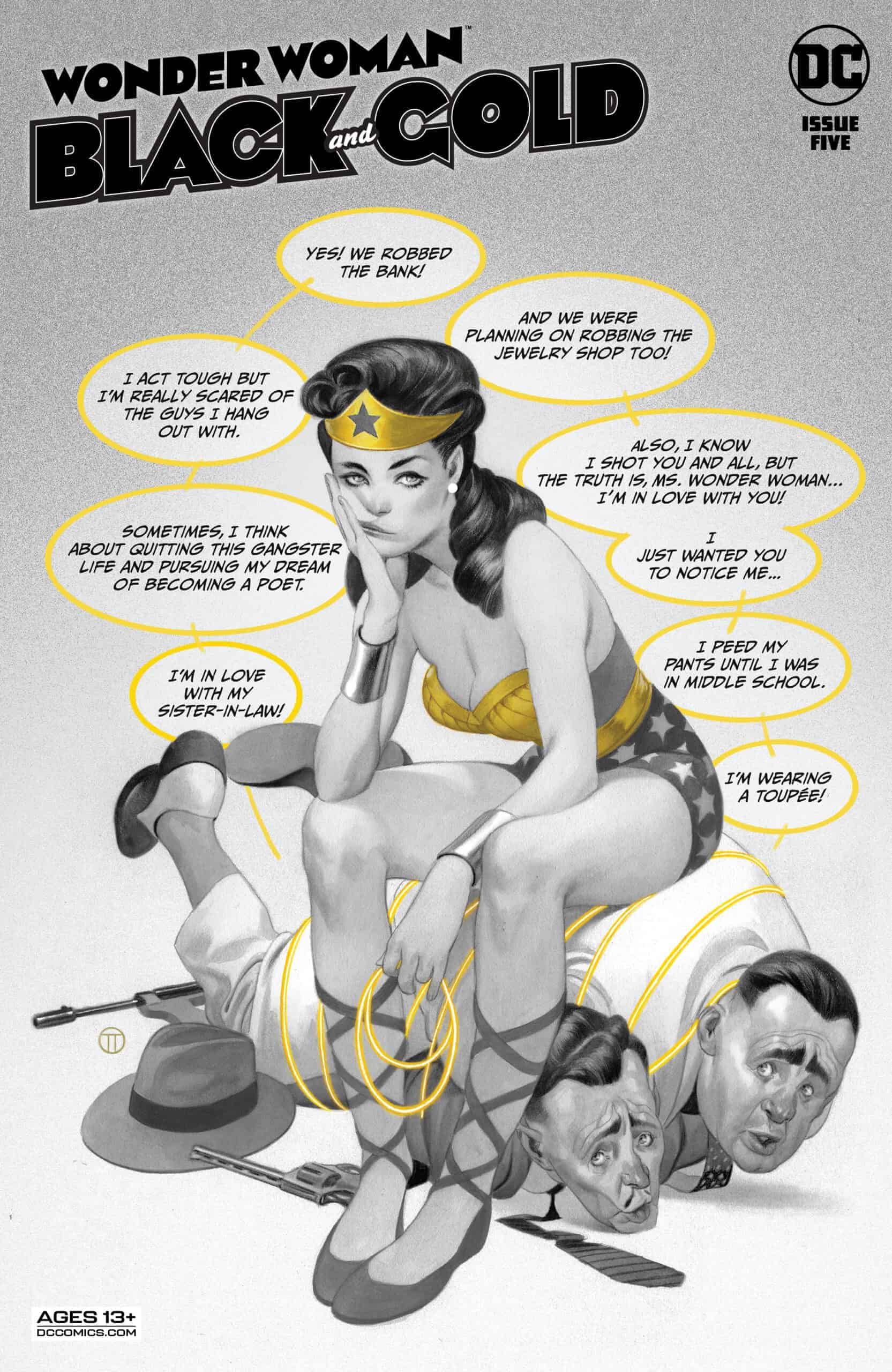 Wonder Woman: Black and Gold is an anthology series with stories by legendary comic book creators that explore the character of Wonder Woman and her themes of female empowerment, all while using a monochromatic color scheme with accents of gold sprinkled throughout.

By Peter J. Tomasi and Christian Alamy
In this first chapter, we get a brief but exciting journey into hell as Diana searches for her ally Hephaestus. We’ve seen Diana travel into the Underworld many times, but this darker take on Hell was quite fascinating. Artist Christian Alamy does a fantastic job giving each of the Hellish generals unique designs that still feel very rooted in myths. I’m not too familiar with a lot of these demons and devils, but a quick Google search shows that Tomasi and Alamy knew the source material quite well.
My only major criticism is that Diana calls a demon sentry “fool” which didn’t feel right to this longtime Wonder Woman fan. It’s a very minor nitpick, obviously, but I did like the rest of Diana’s characterization for this chapter. I just wish we had more time exploring the depths of Hell with the creative team.
Rating: 8/10
Beyond the Horizon
By Sanya Anwar and Pat Brosseau
I’m always very impressed when a creator manages to pull double duty as both writer and artist, and Sanya Anwar does just that in this spooky tale about a ghostly figure in the sea. Diana, learning of this mysterious creature near Themyscira, learns its true origin and, naturally, tries to help.
Anwar’s art gives it an all-ages feel, but make no mistake: this story is bleak. The creature’s origins are horribly tragic, but I personally really appreciate these types of stories. In fact, the story swerves near the end (most likely in an effort to not be too depressing), but I wish it hadn’t. Often there are no answers for grief and sadness, and Diana just being there for the creature would have been enough for me.
Rating: 7/10
How the Wonder Woman Was Brought Low by a Mouse but Captured the Stars
By Kurt Busiek, Benjamin Dewey, Richard Starkings and Comicraft’s Tyler Smith
I’m a sucker for modern takes on Silver Age goofiness, and Kurt Busiek and Benjamin Dewey bring their A-game in this segment. This fun story is a love letter to 50’s Wonder Woman comics and Robert Kanigher, with a bit of the Lynda Carter TV series thrown in. There are actually many shots in which Diana closely resembles Lynda Carter (which reminds me how much I miss Marc Andreyko’s Wonder Woman ’77 series).
The story is a simple hero vs. villain tale, with Doctor Cyber teaming up with Silver Age baddies Mouse Man and the Human Fireworks, the latter of whom has only ever appeared once in the main Wonder Woman title, Wonder Woman #141 (October 1963). The Human Fireworks worked with Mouse Man and Angle Man as members of the Academy of Arch-Villains, so this story is a nice nod to that short-lived team. Dr. Cyber is one of my personal favorite Wonder Woman villains so I’m very excited to see her being utilized here.
I’m a big fan of Kurt Busiek, so I’m thrilled that he was able to contribute to this celebration of Wonder Woman’s 80th Anniversary. Benjamin Dewey, likewise, does a phenomenal job with the art. Special props to Dewey for utilizing the gold accents to great success here. From the Human Fireworks’ body to Wonder Woman’s costume to Steve Trevor’s hair, this is what Wonder Woman: Black and Gold is all about.
Rating: 9/10
Feet of Clay
By Josie Campbell, Carlos D’Anda and Wes Abbott
Antiope is a strange character in the Wonderverse. She has only recently risen to prominence after being featured in the Wonder Woman film, played by Robin Wright. However, in the comics, she’s featured very sparingly. So it’s nice that Josie Campbell took this opportunity to write a story through Antiope’s eyes. Here, she’s depicted as the grumpy old aunt who Diana pesters. It’s a role rarely filled by women, so it’s refreshing to watch Antiope warm to her “clay-thing” niece. This story will definitely be enjoyed by fans of the movie.
My only complaint for this chapter is that I felt the gold accents could have been better utilized. There were a few pages where there was almost no gold at all. It’s not a big deal by any means, but I do think a splash more of gold might have elevated this story.
Rating: 8/10
Memories of Hator
By Trung Le Nguyen and Rob Leigh
Diana visits an old friend, Badra of Hator. Now much older, Badra has opened her own museum to honor her destroyed homeworld. These are the kinds of stories I live for, ones that show the impact and influence Diana has on others, particularly her enemies. Steve Orlando did a similar story in Wonder Woman #51 (2018) with the super-fast villain Mayfly which I adored. Badra is an obscure Wonder Woman villain who only ever appeared in Comic Cavalcade #25 back in 1948. She was the perfect candidate for a story like this, as writers seem hesitant to use characters with “goofy” villain names. Comic fans can accept “Sinestro” and “Atrocitus” but they draw the line at “Eviless”?
Drawing real world parallels to immigrants strengthens this story. “Nobody would listen to a girl with no proof of origin. Nobody but you,” says Badra. This exchange is so powerful and reminds us all to be more like Wonder Woman, to stop and listen and care about others.
Nguyen, like Anwar, both writes and draws this beautiful story. The art seems inspired by classic manga and anime, perfectly capturing the 1950’s sci-fi battle between Wonder Woman and Badra. Nguyen also does a fantastic job showing Badra at three vastly different ages. And I’m obsessed with Diana’s modern civilian outfit with those star-shaped earrings. This was easily my favorite story from this issue, possibly my favorite of all the Wonder Woman: Black and Gold issues so far. I will definitely be checking out some of Nguyen’s other works.
Rating: 10/10

Wonder Woman: Black and Gold #5 is another fantastic entry to this anthology series exploring the different facets of Wonder Woman and her mythology. We get a grand adventure to Hell with Hellzapoppin', solve a ghostly mystery with Beyond the Horizon, a fun Silver Age battle with How the Wonder Woman Was Brought Low by a Mouse But Captured the Stars, a glimpse into Antiope's history with Diana in Feet of Clay, and revisit a long-forgotten foe-turned-friend in Memories of Hator. Next issue is the last and I'll miss this series terribly.