Wonder Woman: Black and Gold #6: The Story Isn’t Over 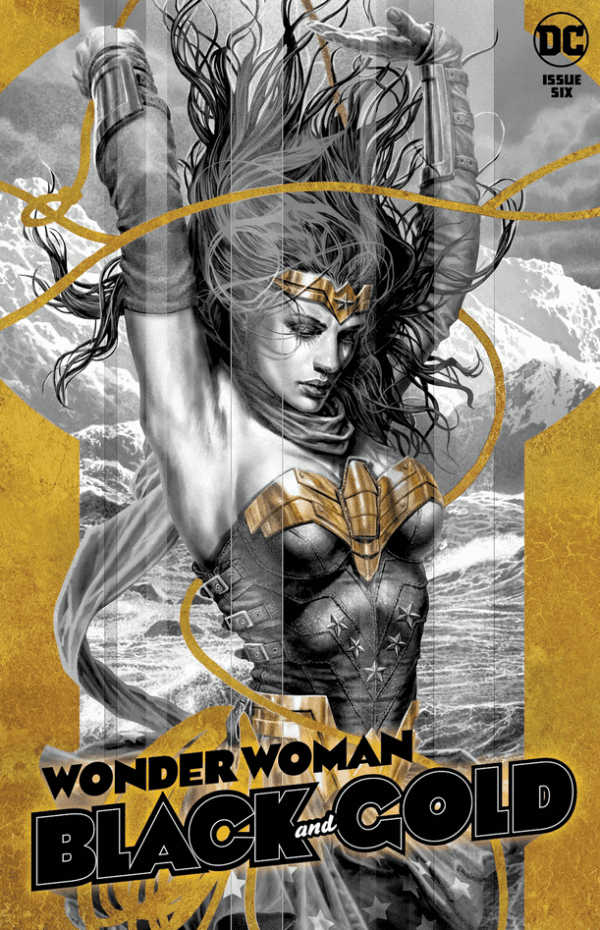 Nothing gold can stay including this remarkable celebration of Wonder Woman beautifully presented in her signature colors! It all concludes, featuring our hero saving a life that will in turn save thousands, a superhero climate crisis, a body swap with one of her greatest villains, and more!

This beautiful story is a love letter to Gloria Steinem and the future of the feminist movement. I’m always a fan of stories that feature Wonder Woman speaking to feminist icons, and you don’t get more iconic than Steinem. Marguerite Sauvage does a phenomenal job with both writing and art for this segment. She smartly enhances utilizes the gold accents to bring eye focus to Steinem in a beautiful splash page, and does the same for Wonder Woman later. The conclusion of the story is a nod to the future of feminism and how Wonder Woman will always be there for the next generation. Truly uplifting stuff and a very delightful opening story to this stellar issue.

The Prophet
By Liam Sharp and Wes Abbott

This was probably the Black and Gold story I was most excited for out of all six issues. Liam Sharp has become one of the most beloved artists in the Wonderverse with a critically-acclaimed run during Rebirth alongside Greg Rucka. Here, Sharp brings a nightmarish quality to the anthology series. This is certainly the scariest Black and Gold has been, with Liam acting as narrator. He slowly succumbs to madness with the shadow of wrathful amazon Berchta looming over him. It’s very Lovecraft-meets-Sword-and-Sorcery with Wonder Woman in the middle. Beyond Sharp’s magnificent artwork, he also does a great job using the gold very sparsely and only when Wonder Woman (or Hippolyta) is on the page. My only complaint is that I would have loved Berchta to be a take on Giganta as the two have very similar designs, and it would have tied more Wonder Woman elements to the story. I’m also just not a huge fan of the meta angle Sharp was going for, though it’s certainly done better here than other similar stories I’ve seen recently.

A Lesson in Truth
By Michael W. Conrad, Noah Bailey and Pat Brosseau

A troubled man in his 50’s takes a group of hostages and demands to see Wonder Woman. I thought to myself as I started reading this, “oh dear. What a generic opening.” But I knew Michael W. Conrad (1/2 of the dynamic duo currently writing the amazing Wonder Woman solo title) wouldn’t let me down. And damn… he really didn’t. This story is dark, tragic, depressing, but also so inspiring. I was driven to tears as Nathan tells Wonder Woman his story of how she saved his family from the Yellow Mask Gang. Conrad perfectly captured the fear of losing your parents at a young age, as well as the use of the Lasso of Truth. Just like with last month’s “Memories of Hator”, this story focuses on rehabilitation and recognizing that you can bounce back from bad choices. Truly beautiful stuff, this story.

I also do have to point out Noah Bailey’s art for this story. There’s a real whimsical charm to many of the panels here, and while I didn’t love Bailey’s Wonder Woman, I thought everything else look fantastic. There’s a particular shot with Nathan’s mother and a gun pointed at her head that really stuck out to me. Very haunting and sad with a touch of Cheetah as her mascara ran down her cheeks. 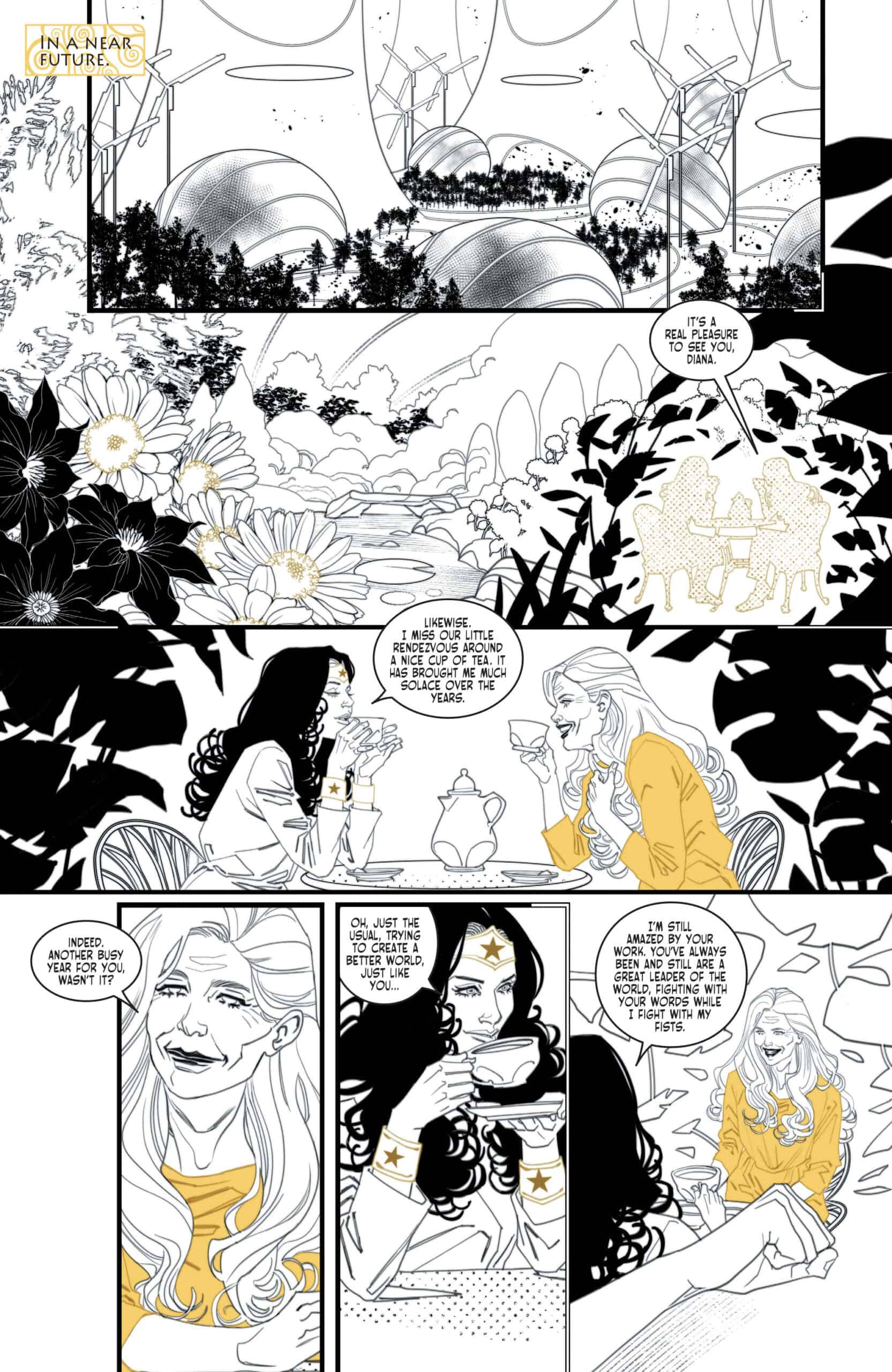 I’m a big fan of Christos Gage from his Marvel work, so I was excited to see his name on the credits for this chapter. And for a Giganta story to boot! Unfortunately, I was left wanting a bit more from this segment. We’ve had a surprising amount of “50-Foot Wonder Woman” stories in the past (like, way too many), so that already has a strike against it. As for Giganta, my common complaint is that she is treated too much like Diana’s frenemy and not a formidable threat in her own right. This story continues that tradition, but better than a lot of the more recent stories. The idea of Giganta and Wonder Woman swapping powers is fun, and this story would’ve worked a lot better had the ones that came before it not blown me away. As such, this is one of the weaker entries for me.

I’m not familiar with Dr. Sheena Howard, but I liked the overall plot of this story. The message is strong, but it’s a shame that the creative team had only a handful of pages to tell it. Jamal Campbell’s art is amazing as usual, and Nubia in particular looked gorgeous. I’m filled with joy any time Nubia appears, so I’m glad to see her here.

One part of the story that confused me was the use of Athena. She seems to be in cahoots with Poseidon, but no reason is given for why she has turned against Wonder Woman. Athena is a huge character in the Wonder Woman mythos, so to see her as a henchwoman is bizarre. Despite this, I loved the relationship between Diana and Nubia. They felt like true sisters, and not just in the Amazon way.

Wonder Woman: Black and Gold comes to a close with this final issue, but what a joy it has been to see a diverse collective of writers and artists celebrate Wonder Woman's 80th anniversary with this anthology series. This issue features two of the best stories in the entire anthology with "A Lesson in Truth" and "Role Model".

Wonder Woman: Black and Gold #6: The Story Isn’t Over