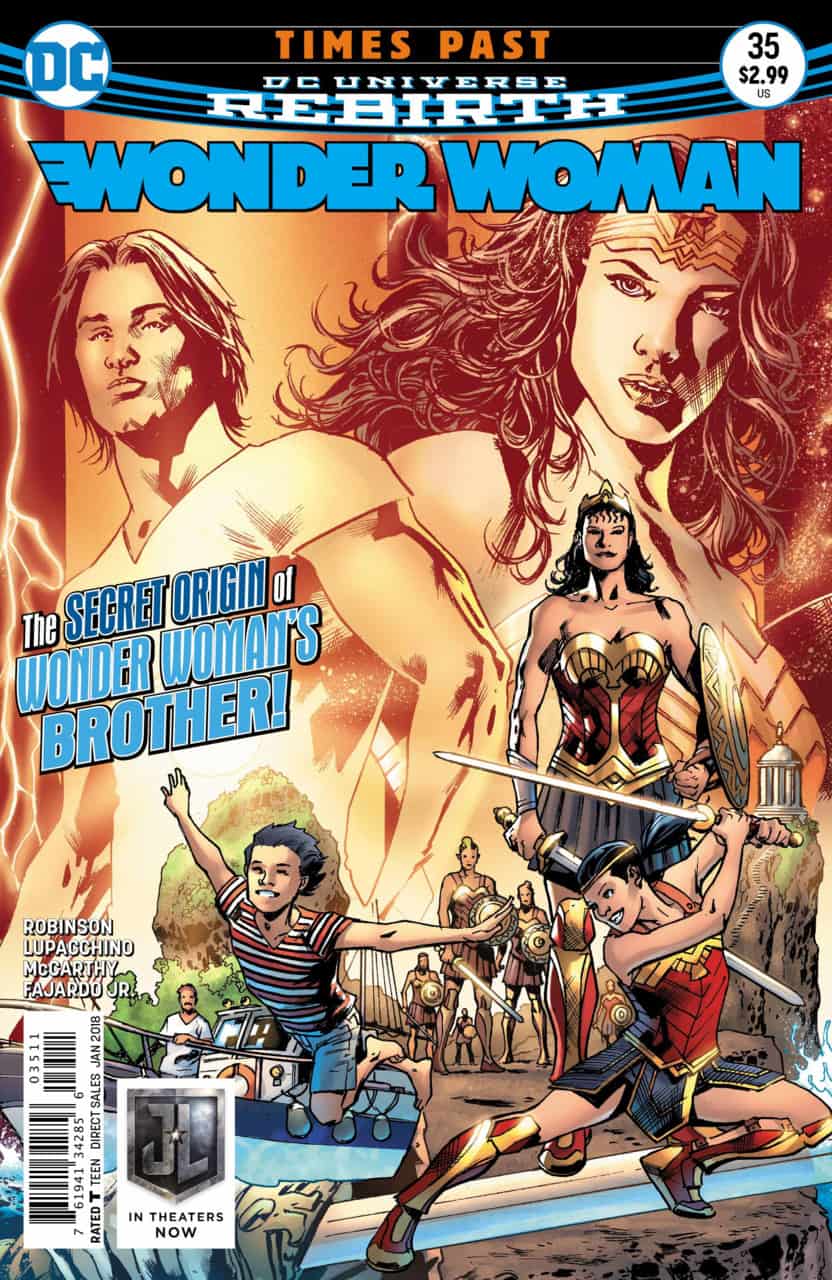 In Part 2 of the “Times Past” storyline we learn more about Diana’s long-lost brother and the events that have led him to where he is now. We’re also once again left with a book without a title character.

Diana has a long-lost twin that seems none too fond of her. He’s teamed up with Grail against Wonder Woman but to what end we do not know (yet).

Mostly you’ll learn more about Jason. In flashback, we follow him from his childhood through the recent past. He grew up a happy child, curious about his parents but not obsessed. Glaucus takes him to Hercules for training, from him Jason learns about his heritage and his many brothers and sisters.

At some point, Jason experiments with heroics of his own after Hercules leaves but is discouraged by his foster father. At some point Glaucus also leaves, citing an undisclosed need to wander. Mythology nerd side note: I looked up the mythical Glaucus (there are several) the one associated with the Argonauts was a demigod son of Poseidon and lover (later curser) of Scylla, but nothing in his history mentioned a compulsion to wander. So it seems that was perhaps made for the comic book. With all of his family and close ties gone, Jason feels isolated. When Wonder Woman appears in the world, he watches her televised coverage with growing bitterness. As the issue draws to a close, we see Jason heading to a turning point which will presumably lead him to where he is now.

Once again, we have a Wonder Woman book without Wonder Woman. The story itself is interesting, though not particularly innovative, I have to admit I’m a bit tired of the book containing very little about Diana. Character spotlights are one thing, but between following two arcs, one of which contains nothing of Diana except for side panels, and the hyper-focus on Diana’s brother, the title character has become nothing but a backdrop for Jason and Grail’s story.

The amount of active story time that Diana has seen since “Children of the Gods” started has been steadily decreasing. Now with “Times Past”, we’re doing focused biographies on other characters every other issue, and Wonder Woman’s absence is compounded. Neither Jason nor Grail got enough development to devote an entire issue and while the writing and art are themselves good enough, it just feels like these arcs are stalling and everyone except Wonder Woman is getting face time.

Final Thoughts: The creative team is doing a pretty good job of writing a comic book with a classic feel and with class themes, they just don’t seem to be writing a Wonder Woman book. I hope to see Diana taking an active role in her own book again.