Crows in the Sand, Sharks in the Water (Wonder Woman/Conan #2) 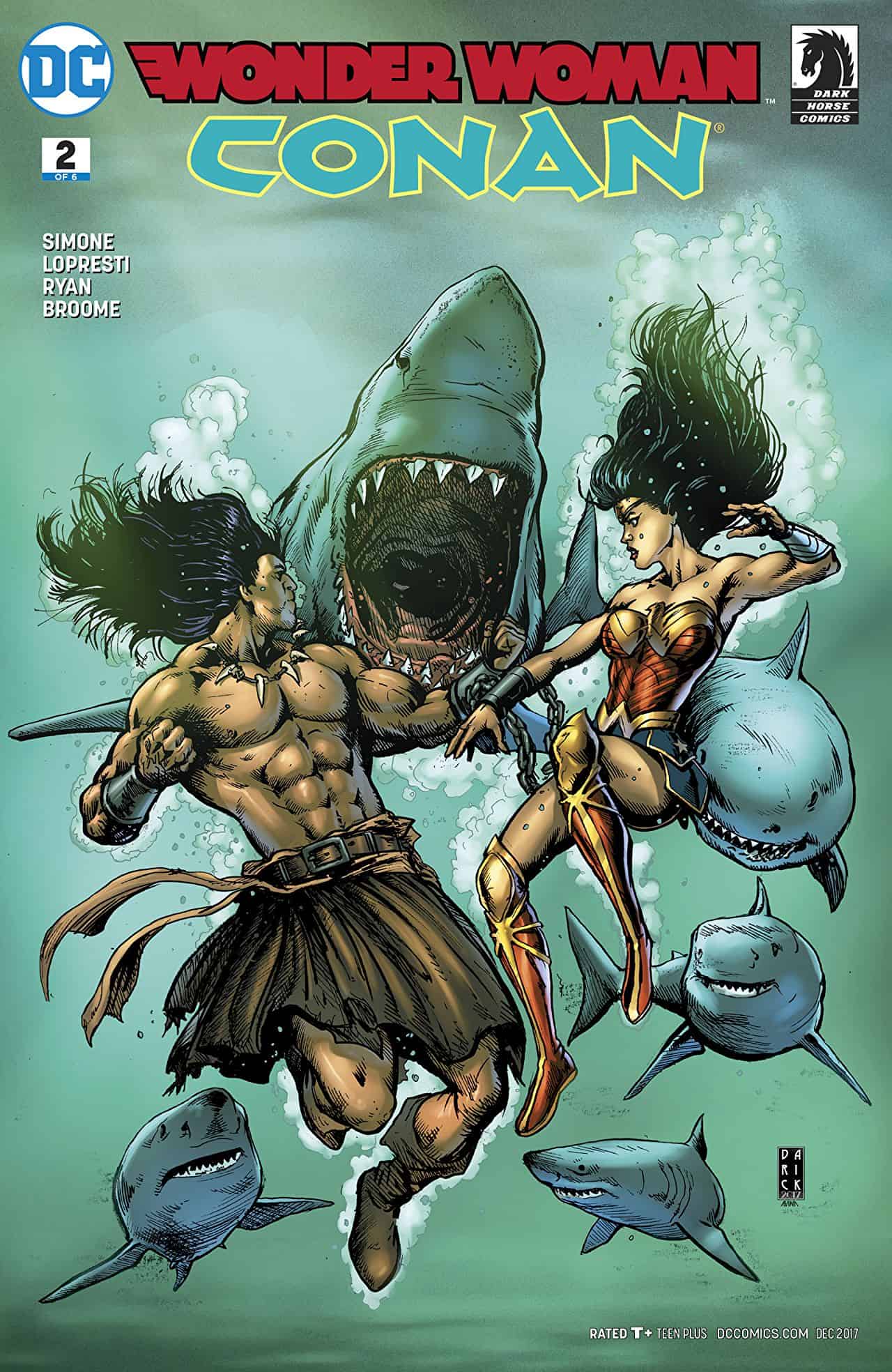 Wonder Woman and Conan the Barbarian team up (sort of) after Diana finds herself thrown back to the Hyborian age without her memory but with plenty of spirit. Or is she the girl that Conan met so long ago? Our heroes find themselves relying on each other but also at odds as they wind their way through someone’s wicked web……

Last issue Conan met an amnesiac Wonder Woman, a prisoner forced to fight in the arena. She reminds him of a girl, Yanna, that he met long ago and he wonders if he could have found her again. By the end of the issue, both have been captured and will be forced to fight each other for sport. We also know that two shape-shifting crow-women are following the events with great interest, seemingly at the heart of the mystery and not done with our heroes yet……

Conan and Wonder Woman face off in the arena. Still thinking she is the girl from his past, Conan is unwilling to fight. Diana, her memories at stake, take the offensive desperate to regain her self. Conan holds his own as the two mysterious women (crows?) watch the battle and discuss the terms of victory in whatever game they are playing.

The battle ends, without fatalities, much to the consternation of the arena master who has had enough. Conan and Wonder Woman is sold to a slave ship. The fight in the arena has taken its toll though and left each mistrustful of the other. Rather than working together they strike out on their own.

This, of course, leads to more trouble more fighting, and …. Sharks! Will our heroes be able to work together and avoid the jaws of defeat? Only next issue will tell.

A whole lot of action-packed adventure, that’s what happened! There are so many ways a crossover like this can go wrong and Simone seems to be doing everything right. The story elements are classic, but nothing is trite or predictable. The story pace is perfect, the art layouts are dynamic and beautifully rendered. And I’m still loving the intricate details in the flashback borders.

The characters in their look and feel bring the personalities of each main character and meld them together wonderfully which makes a great fit for the book. Rather than being out of her element, Diana seems more at home in this book than she has in general for a while. Conan’s reactions to Wonder Woman fit well with his nature and the two of them make great adversaries and great teammates, as the need arises.

Final Thoughts: Overall the book is well-paced, dynamic, engaging and most of all — fun! Everything an action-adventure comic book should be. If you aren’t reading this series, you should be!

Black Panther and the Agents of Wakanda #6: Meet the Livewires
February 20, 2020