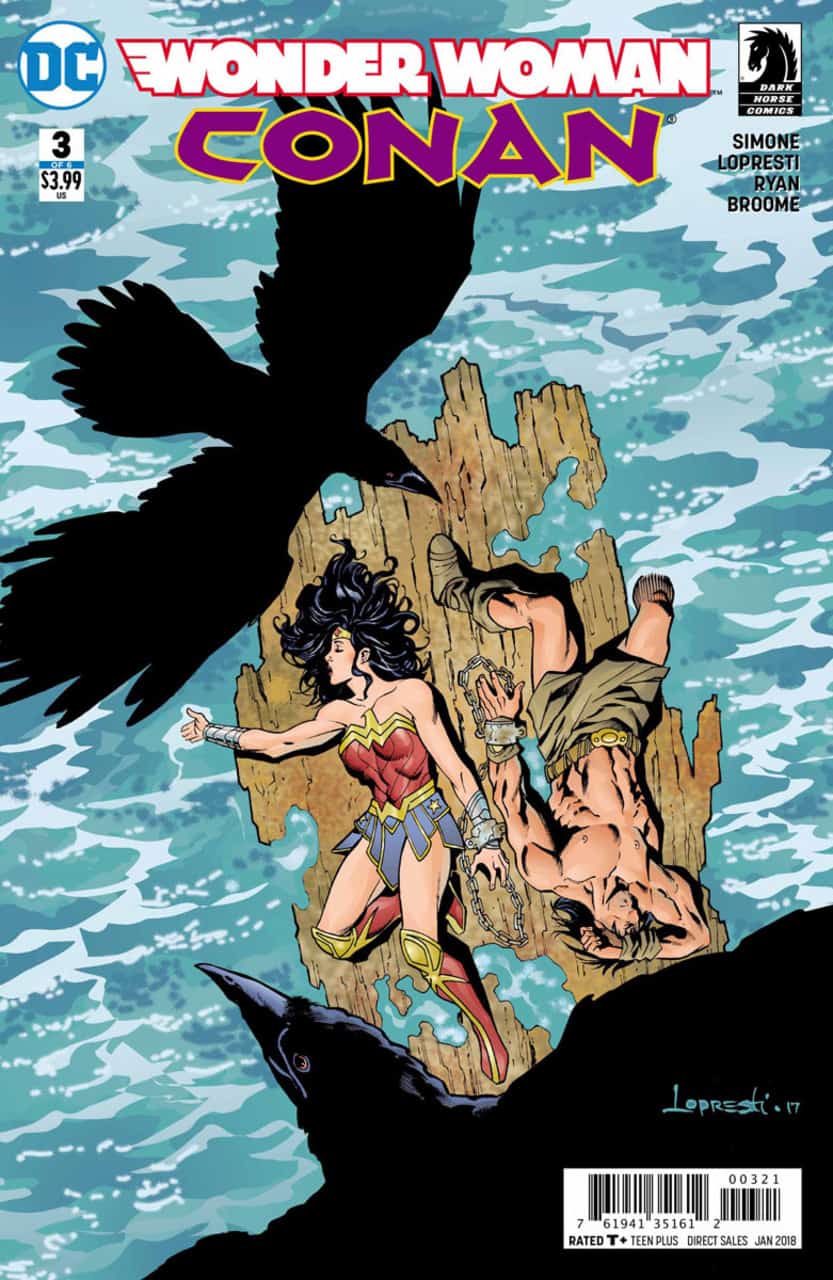 Wonder Woman and Conan find themselves trapped on the high seas and at the mercy of two wicked crows. It will take all of their wits and strength to get themselves out of this one. With all the mistrust between them, will they be able to work together to overcome their foes?

Wonder Woman has been transported to Conan the Barbarian’s time, the two of them have fought together in the arena, then fought each in the arena,  then sold as slaves, thrown overboard, and been attacked by sharks. Yikes. And it’s not over yet.

What You’ll Find out (Minor Spoilers):  We flashback to more of Conan’s childhood, finding out that his beloved Yanna plans to leave her tribe and is taking the young barbarian’s heart with her. In the present day, Diana and Conan make short work of a shark but are left shipwrecked and adrift.

In the meantime, they speak of Conan’s god and how his beliefs shape his life. Diana also broaches the subject of why Conan will not meet eyes with her. He reveals his strong hope that she is his lost Yanna, and his equal fear that he cannot bear for her not to be.

This leads to a reconciliation of sorts, and trust begins to return between them. And just in time, as the two find them whisked off from the endless sea to even more dire straits and the presence of our two wicked crow-women. We finally learn their intent, which is nothing good for our heroes seeing as it will likely lead to their deaths. But like all good villains, they have no given purpose where before there had been mistrust and aimless wandering. Armed with the weapon of a clear enemy and a definite goal, Conan and Diana are ready to enter the fray once more.

Another solid issue, both in terms of story and art. The story is moving along at a decent clip. The crows are turning out to be formidable villains. Their pure embodiment of wickedness falls just short of cliché, painting them instead as creatures of pure intent and selfishness. The interaction between Conan and Wonder Woman is honest and intimate, at some points tender, without falling into a tired romantic tangle, which is refreshing. They related to each other as equals and empathically. Both Conan and Wonder Woman continues to be portrayed true to their core concept. Simone has done an excellent job mixing the two characters together without forcing dramatic changes in either’s personality. There is a good balance of action and exposition and the art continue to be enjoyable.  The story continues to be interesting and I’m looking forward to the next installment.

Final Thoughts: This book is turning out to be a real joy. This is one of the best crossover comics that I’ve read in some time. And this is a great book for both Wonder Woman and Conan. It’s just so much fun, this is how comics should be.

Black Panther and the Agents of Wakanda #6: Meet the Livewires
February 20, 2020