Watch Out for That Spear (Wonder Woman/Conan #4 Comic Review) 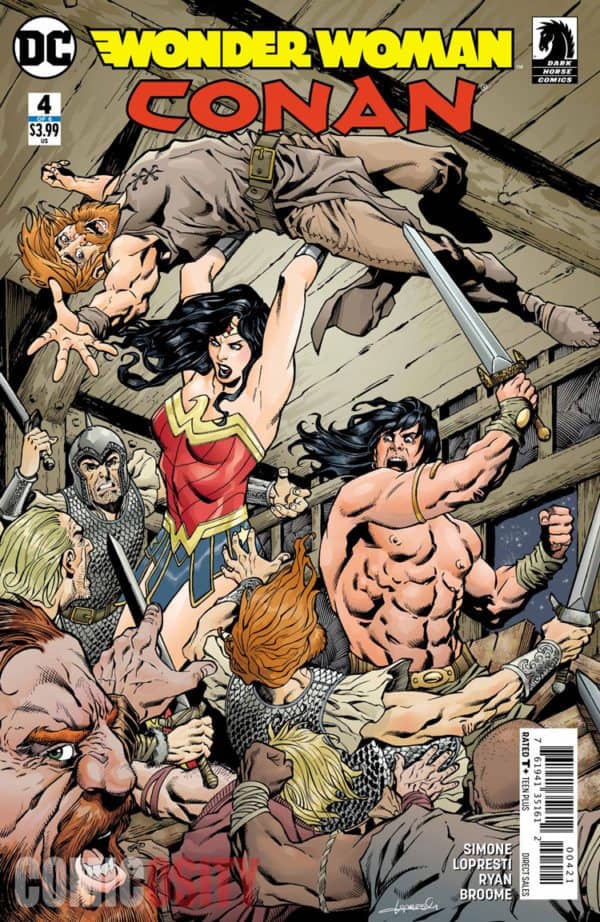 The story of the Amazon and the Barbarian continues with drinking, a tale of love, and a bar brawl or two. We learn more of the desires that drive each of our heroes, and the depths to which crows will claw.

Wonder Woman has been set adrift in time and space with a fractured memory, straight into the path of Conan the Barbarian who sees in her a love he lost long ago. Two mysterious crow-women have wagered against the lives of our heroes and are determined to see them face off in mortal combat or to raze the world around them.

In the present day (Hyborian-style), Conan and Diana take a bit of a breather to bond over a drinking contest and for Conan to recount more of his tale of Yanna, the girl he once knew. He still insists that Diana is his lost friend, though it seems he does so more to vex the Amazon than out of earnest belief. Indeed, from the flashbacks during his tale, we are lead to believe that his beliefs stem more from uncharacteristic regret than they do conviction of thought.

We also catch up with our mischievous crows as they seek out ways to drive the heroes to fight one another. As one crow lays a trap for Conan and Diana, the other spurs Wonder Woman on through a deceptive dream. She sets Diana on the path back to the slavers that originally captured her in order to retrieve her lasso of truth. The crows also seek to plant the seeds of distrust, but it’s unclear at the moment whether Diana has seen through their deception to the tangled web beyond.

The end of the issue leaves us (or at least me) wondering about Conan’s motivation in all of this and what he hopes to gain by aiding Diana. We know what she wants, to regain her life, but what about him? Conan is not one for delusion or sentimentality and rarely altruism, so where does that leave him? How far is Diana willing to go to return her memories and make her way back home? And what will be waiting for them when they reach the arena? Only two more issues to find out, and this story doesn’t seem to be letting up at all. We are no doubt in for a heck of a tale!

This series continues to deliver on every front. There is a bit less balance in this issue, though perhaps intentionally, as we see Wonder Woman giving in to her baser side, acting almost stubbornly defiant with Conan. Though to be fair, Conan seems intent on antagonizing Diana at every turn, perhaps because he knows that she is not Yanna as he seems to desperately wish, and he wants to enjoy the illusion while he still can. In that respect, Conan was uncharacteristically sentimental and caring in this issue, both in present day and in flashback. Simone seems to dip a toe from each into the sphere of the other, but I suspect next issue will show each in their own wheelhouse and in full form.

It’s a tricky line to walk with each of these two, who are similar in many ways but in different proportions. Diana is the noble warrior with tendencies of fierceness, while Conan is the fierce barbarian with tendencies of nobility. It’s no small task to write them with each other and not veer too far one way or the other. It’s been a real delight to watch this dance between them, both visually and in terms of the writing. Simone has impressively turned this into a tale of high adventure and high romance without reducing the character of either of the heroes to some sort of trite cliché. The story is classic while still unpredictable.

Lopresti and Ryan continue to do an excellent job visually. The art is elegant in its simplicity. There isn’t a lot of complexity to many of the panels, but the structures, expressions, and background are well-detailed. This works nicely to reflect the time when things were perhaps more “primitive” but more carefully crafted. And of course, I have to point out the lovely detailing in the flashback framing around the panels, which are beautifully illustrated and change to reflect the tone that each of the memories takes. At first glance, it would be easy to dismiss the art in this book as almost cartoonish, but the more I look at it, the more impressed I am by the quality of the work that the art team has done here.

Final Thoughts: I’m still riding high on the quality of this book. If you have not been reading this series, you need to pick this issue up and the three before it. Now. I mean it, stop reading this and go get these books!