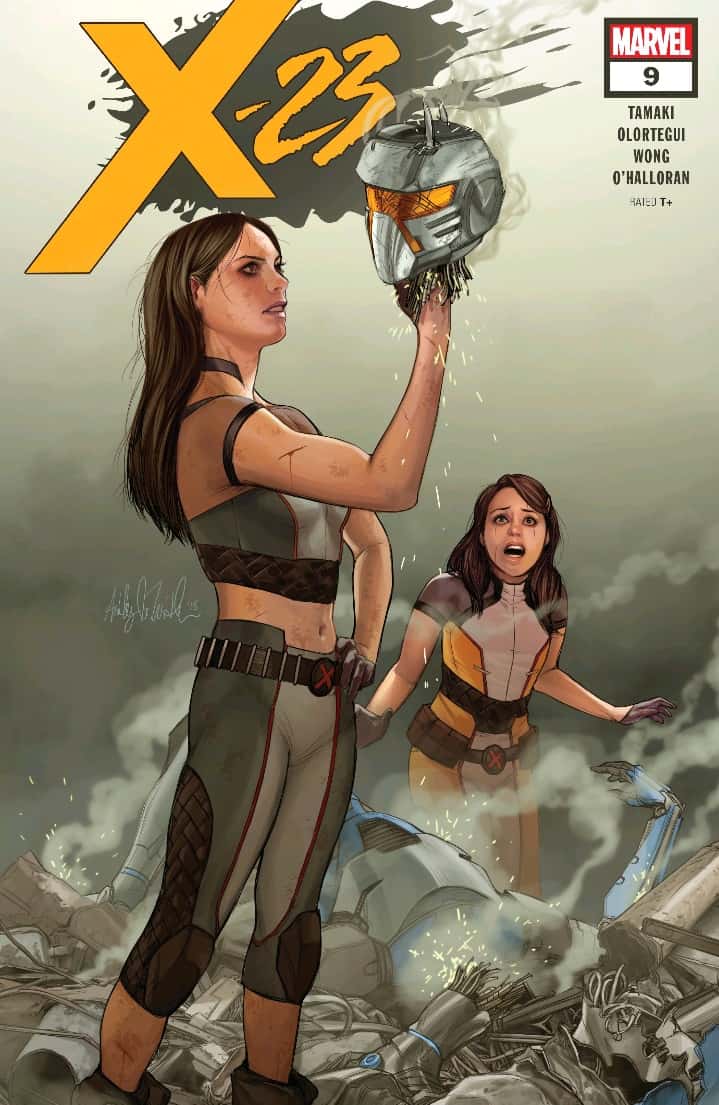 Gabby is still hanging out with her other “sister” the X-Assassin in Beast’s Lab. She forgets her phone which the cyborg promptly hacks.

Beast tracks a signal sent to the X-Assassin giving Laura a lead. While Laura investigates Medi-X-Tronics, Gabby continues to worry about her new sister’s well-being. 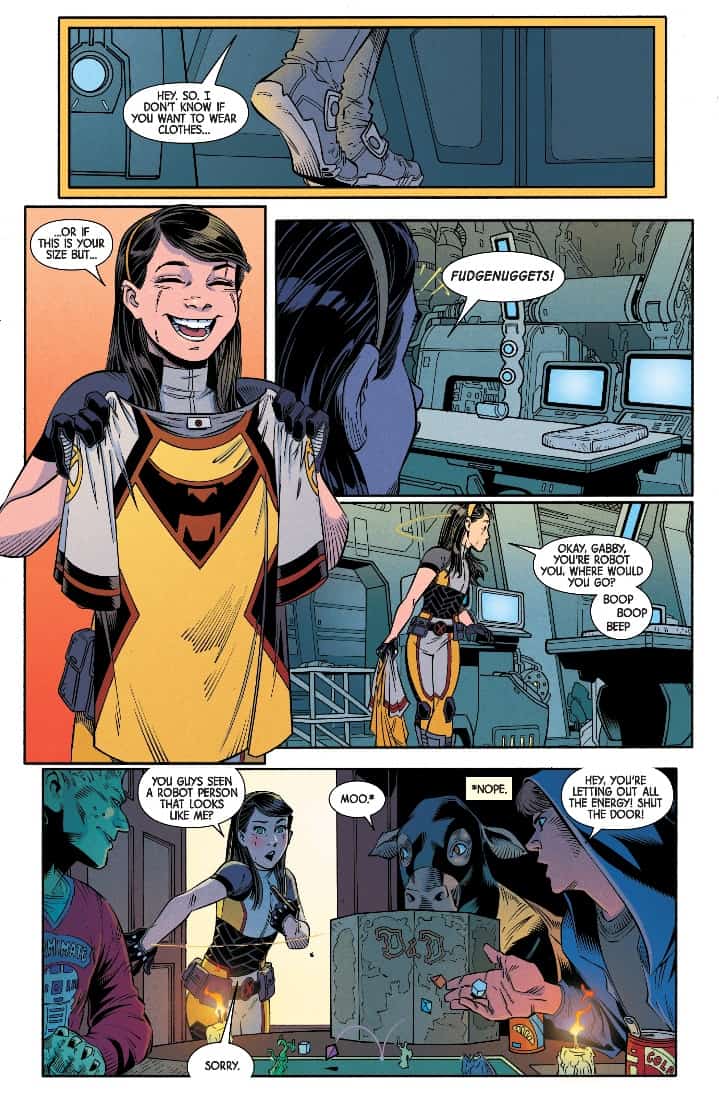 Laura is detected sneaking in through the backdoor. 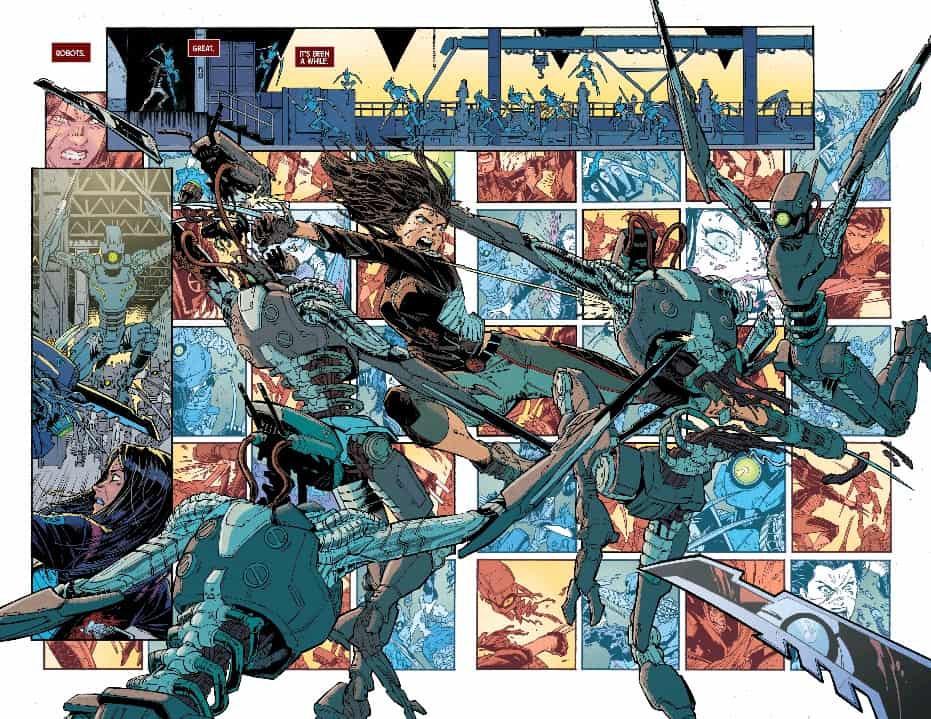 Gabby finds the X-Assassin on the roof. She appears to get through to her. Meanwhile at Medi-X-Tronics after a certain amount of stabbery things fail to improve… 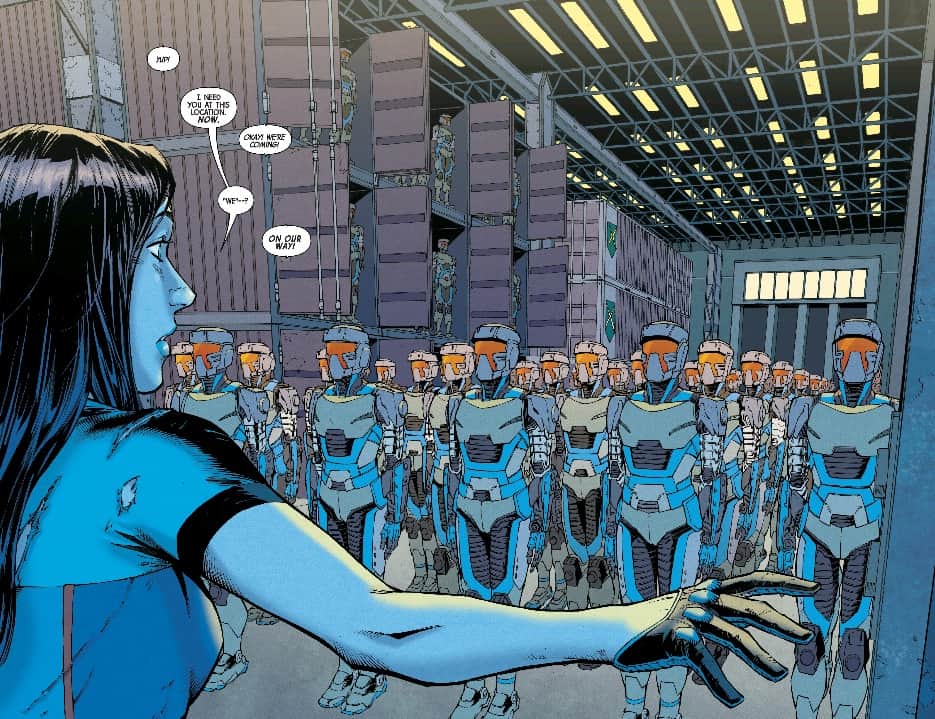 The cavalry (such as they are, a prepubescent girl and a cyborg of uncertain loyalty) are on their way!

This was a more eventful issue, but I think I may have to accept that this arc is probably not going to reach the heights of the first. Juann Cabal’s art and Nolan Woodard’s coloring lent this series a real sense of gravitas. 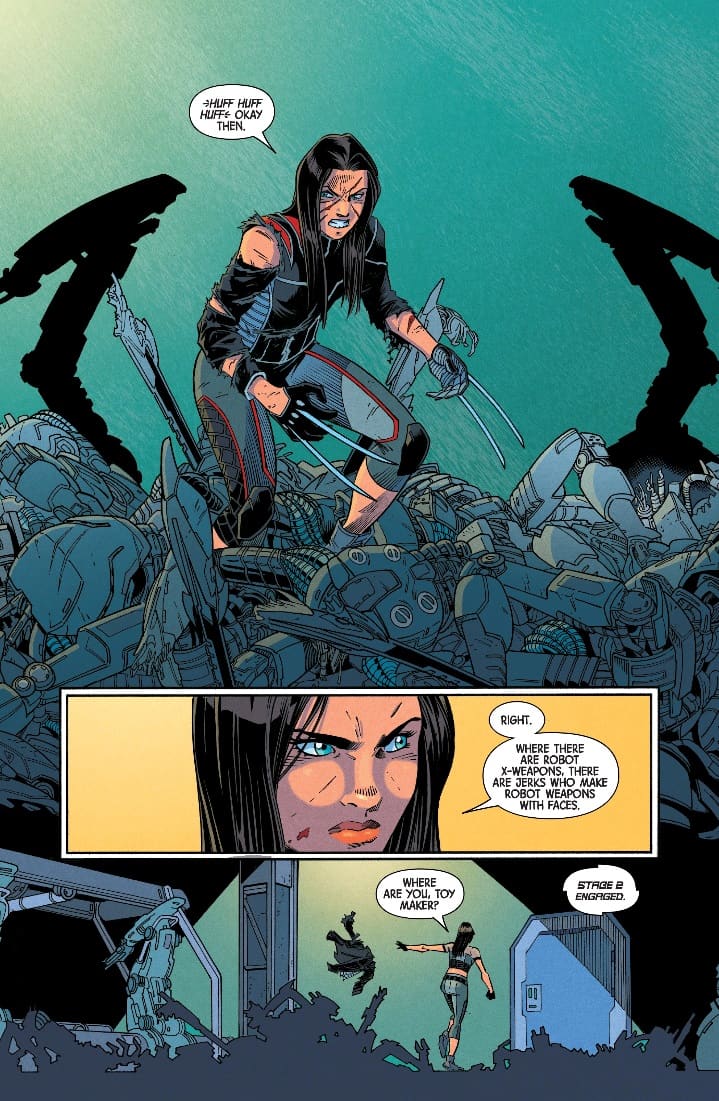 The art here is good and reflects the character’s well, Laura is a badass and Gabby is played for laughs, but it’s more cartoonish and doesn’t have the same heft. Seriously, go back and look at some of the art from the spectacular issue 4. 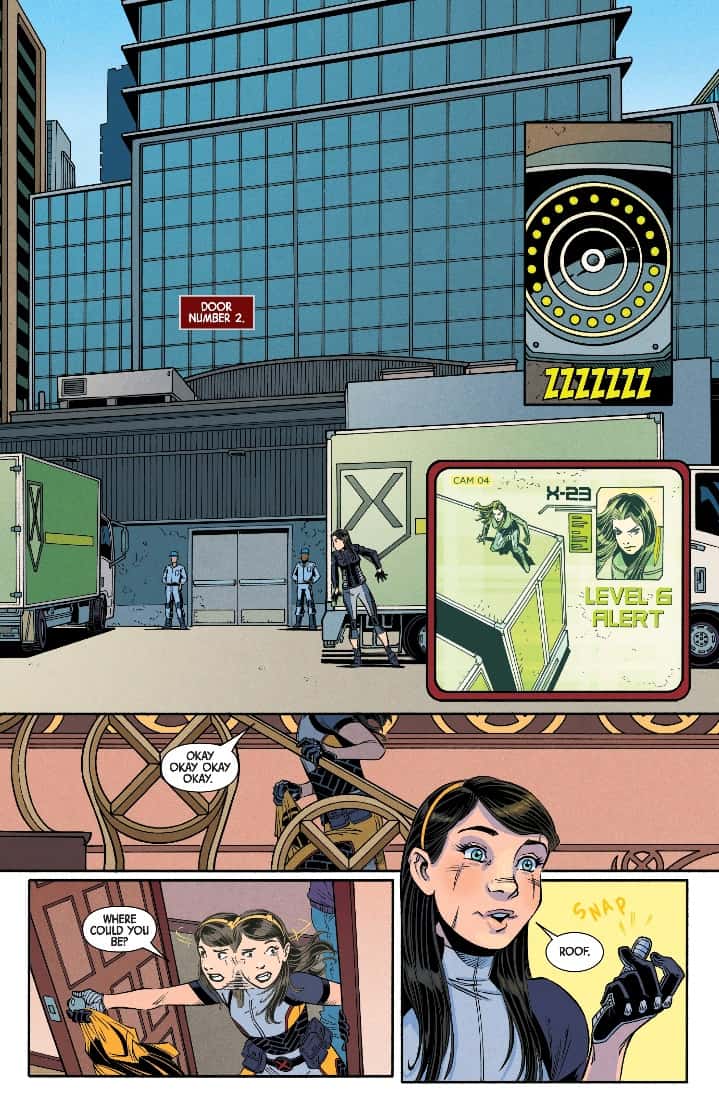 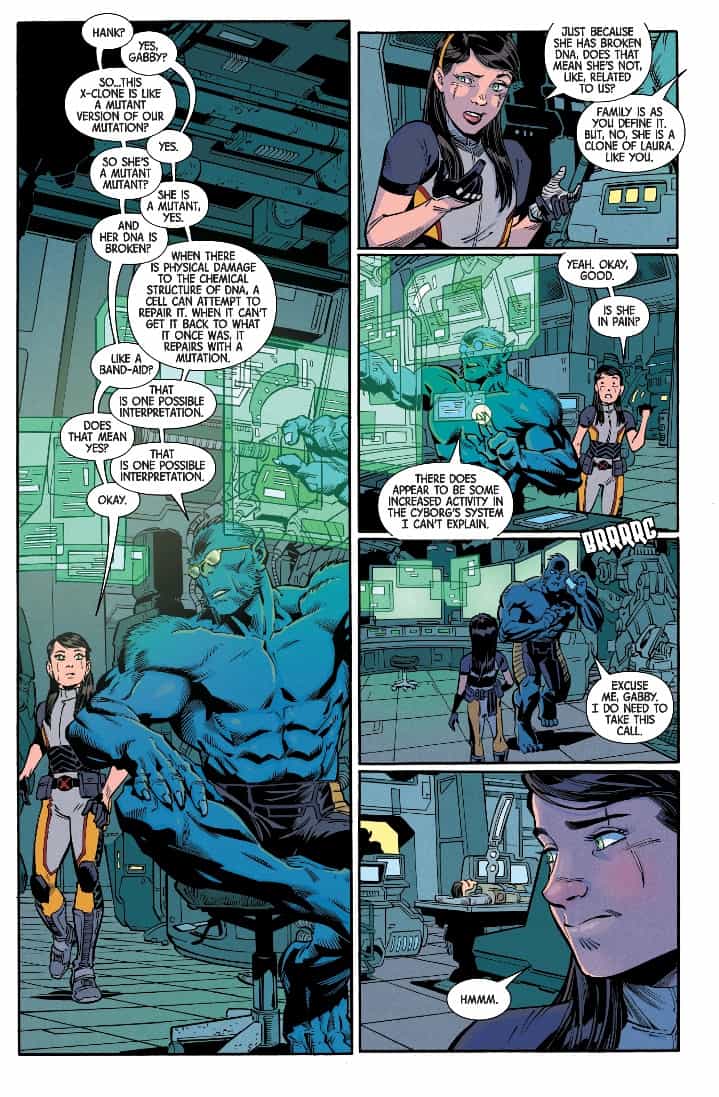 Beast was effectively characterized in one exchange with Gabby. 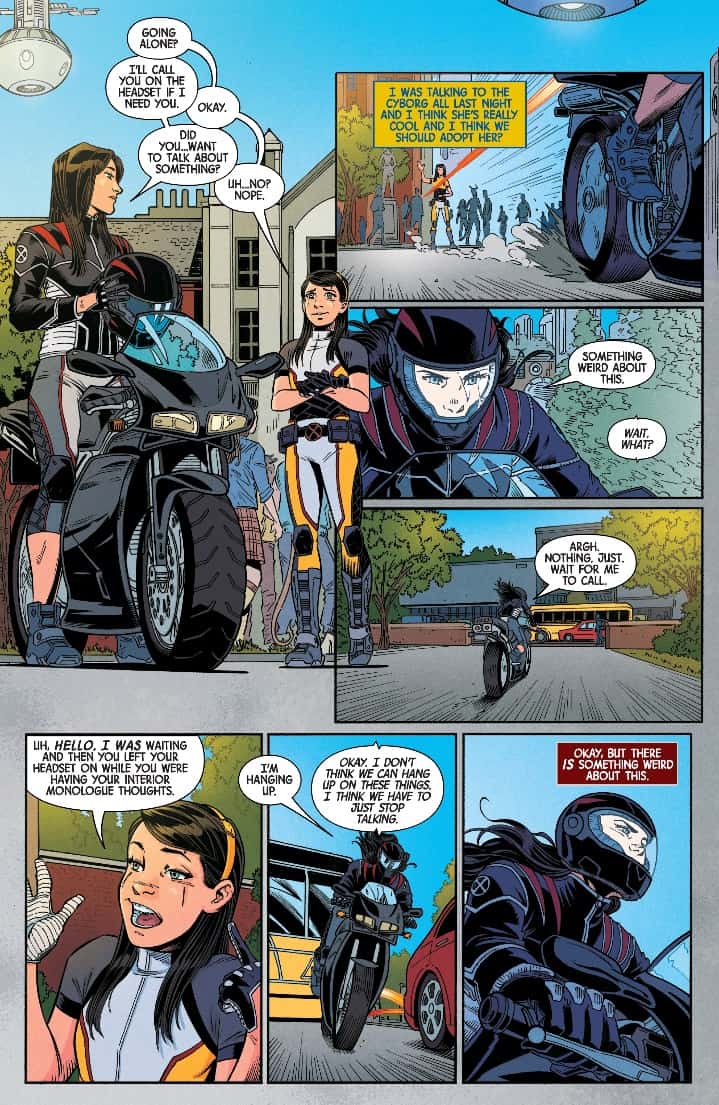 I also liked Gabby’s line about Laura’s monologuing given that it’s been a recurring feature of the series, but there have been no genuine laughs in the last three issues which despite their mostly dark subject matter was not the case in the first six. 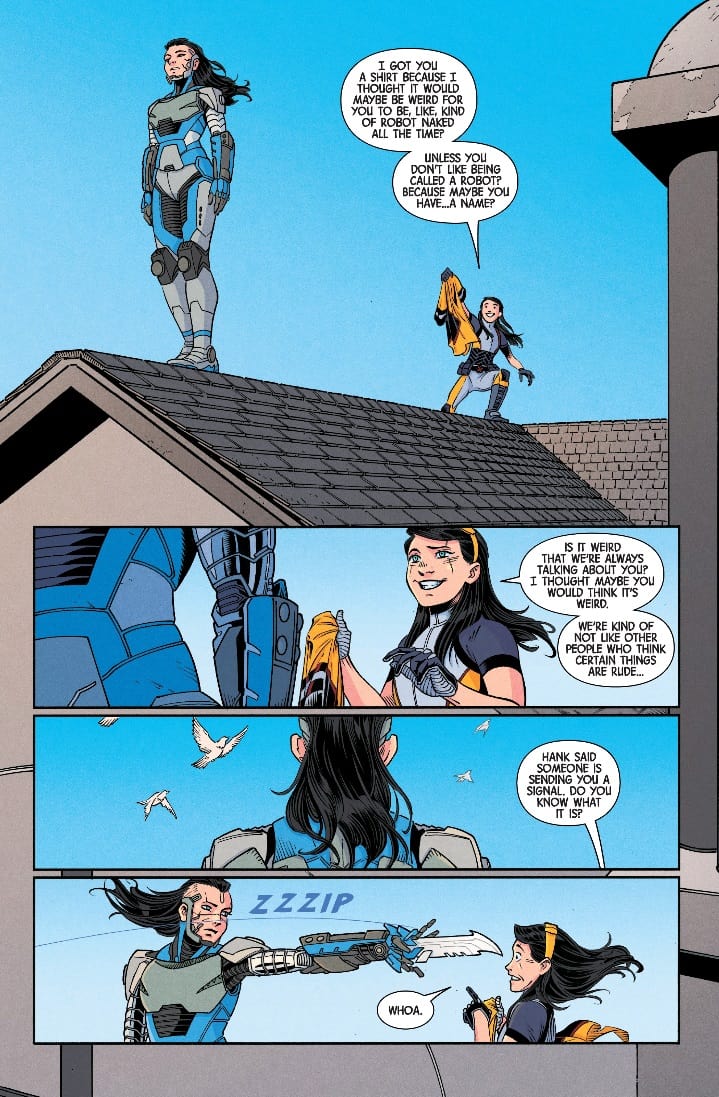 I’m beginning to worry that in this series Laura may have regressed from being a character who has triumphantly overcome her trauma back to someone who is defined by it, from an embodiment of humanist positivity to a once bitten, twice shy cynic. In the first two issues of this arc I was concerned by Laura’s wariness towards the X-Assassin and I’m glad that Gabby’s trust in her new sister appears to be paying off (and incidentally, are those doves? #SYMBOLISM.) One of the major themes of Tom Taylor’s All-New Wolverine (no… *sniff* I promised I wouldn’t cry) was Laura’s determination to do the right thing regardless of the risks involved. There were plenty of examples of her being not just self-sacrificing but actually putting the claws away and turning the other cheek to save the lives of people who, despite her healing factor, could have killed her (much as Gabby faces down the X-Assassin here.) 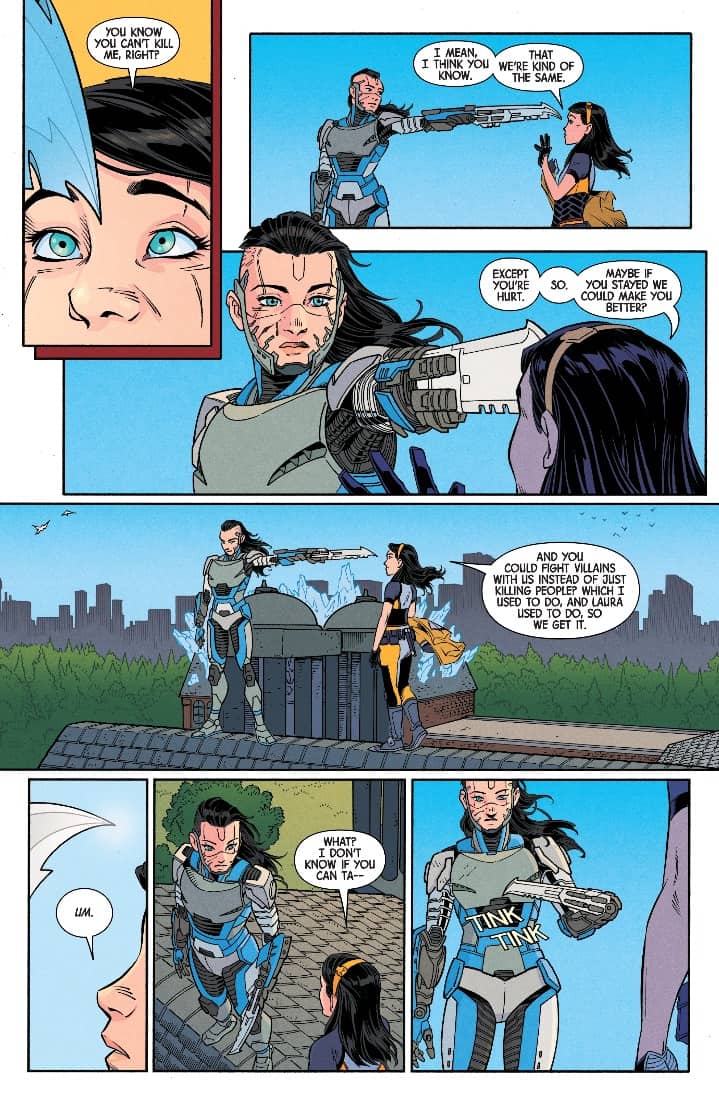 That is fulfilling the X-Men’s mantra to protect a world that hates and fears them and more generally that’s what heroes do. Laura Kinney as Wolverine did not allow fear to influence her worldview. Her risk averse suspicion of the X-Assassin was in danger of running against all of this and would be the worst kind of retcon, undoing a lot of personal growth and leaving us with a superhero book that says: “don’t be a hero.”

Action, emotion and it’s hopefully avoided what threatened to be a betrayal of a retcon so I can forgive the lack of laughs.