X-Cellent #3: Strangest Heroes of All 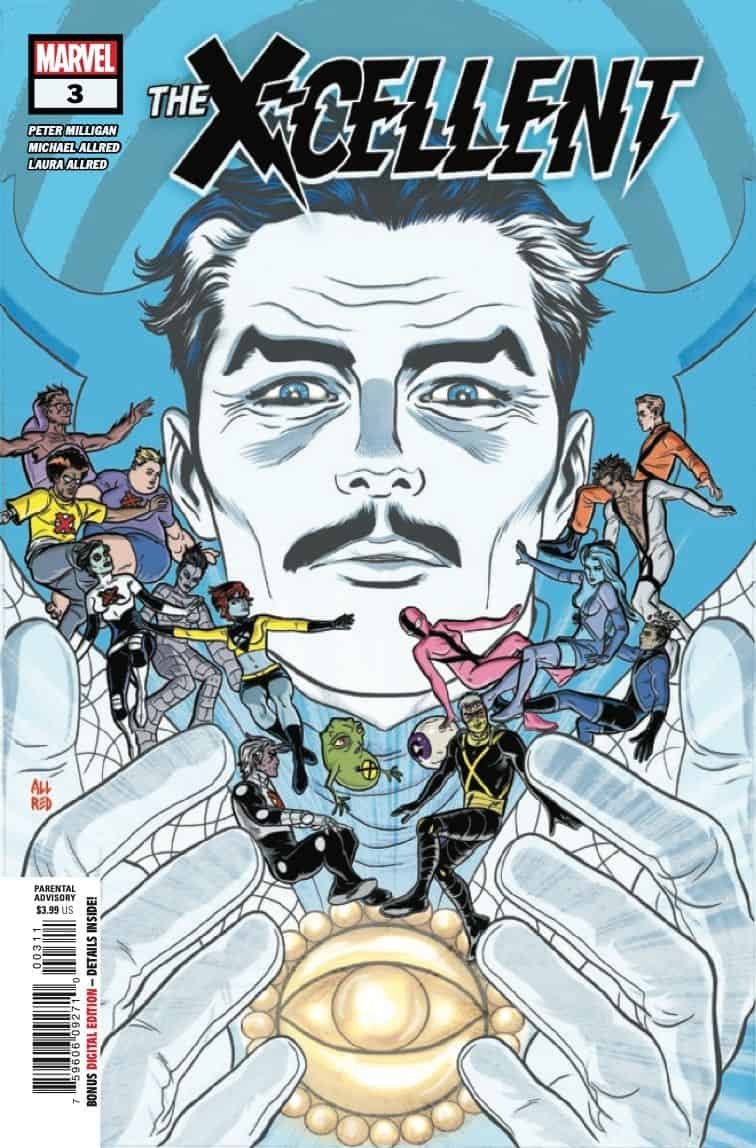 THE X-CELLENT DID WHAT?! That’s right, you heard it here first—the X-Cellent are taking on Doctor Strange! No one got famous for following the rules, and Zeitgeist knows this. But will this launch them into superstardom, or are they canceled? Zeitgeist will have something to say about that!

Peter Milligan’s longstanding mutant collaboration with the Allreds continues this week in The X-Cellent #3.  In the last issue, we were introduced to new team members, new plot revelations, and the signature black humor and psychedelic imagery these creators first introduced readers to in the X-Force/X-Statix line.  Milligan and the Allreds do much of the same in this week’s installment, complete with an unexpected guest star.

The issue begins with the X-Cellent’s new resident teleporter Whoosh’s visually bizarre method of transporting the team, which bookended X-Cellent #2.  Quickly, team leader Zeitgeist introduces new members to the fold.  Terrible character designs equipped with useless powers are a staple of Milligan’s X-Factor/X-Statix/X-Cellent (oh my) humor.  This issue’s additions, one of whom can “generate bucketloads [of belly button lint] at will,” are uniquely ridiculous, though, even by the title’s standards.

Next, the original X-Statix team tries to stem the rapidly growing social media following of the X-Cellent with the help of a new, nonbinary friend.  The character’s name alone shows that Milligan has no problem hilariously satirizing issues as touchy as evolving gender norms, though quickly we shift to the promised showdown between the X-Cellent and one of Marvel’s true heavyweights.

When the X-Cellent’s plan to trash some of Earth-616’s most famous digs for clout backfires, Zeitgeist sics their still healthy fanbase on the rival X-Statix’s new ally.  Whether the world’s most incompetent super team will stop his plot in time will no doubt be revealed in X-Cellent #4.

The Allreds’ art is as stylized as ever but fits very well with the content of this particular comic.  Mirror girl of the X-Statix has a design particularly suited to their ‘60s sensibilities.  By now, given the cover and solicit, fans will know Doctor Strange appears in X-Cellent #3.  Modern comic art has never been kind to his awesomely antiquated look, and his fleeting time in this issue will have readers wondering whether Mike and Laura Allred can draw him full time.

The X-Cellent #3 is yet another example of the biting humor Peter Milligan has brought to Marvel’s mutants for decades.  The fast-moving plot means that style is valued somewhat more than substance, which will make the wait between this issue and the next a bit frustrating for fans.  This is a good comic book, but one cannot help but notice that it’s tailor-made for binge-reading.

X-Cellent #3: Strangest Heroes of All