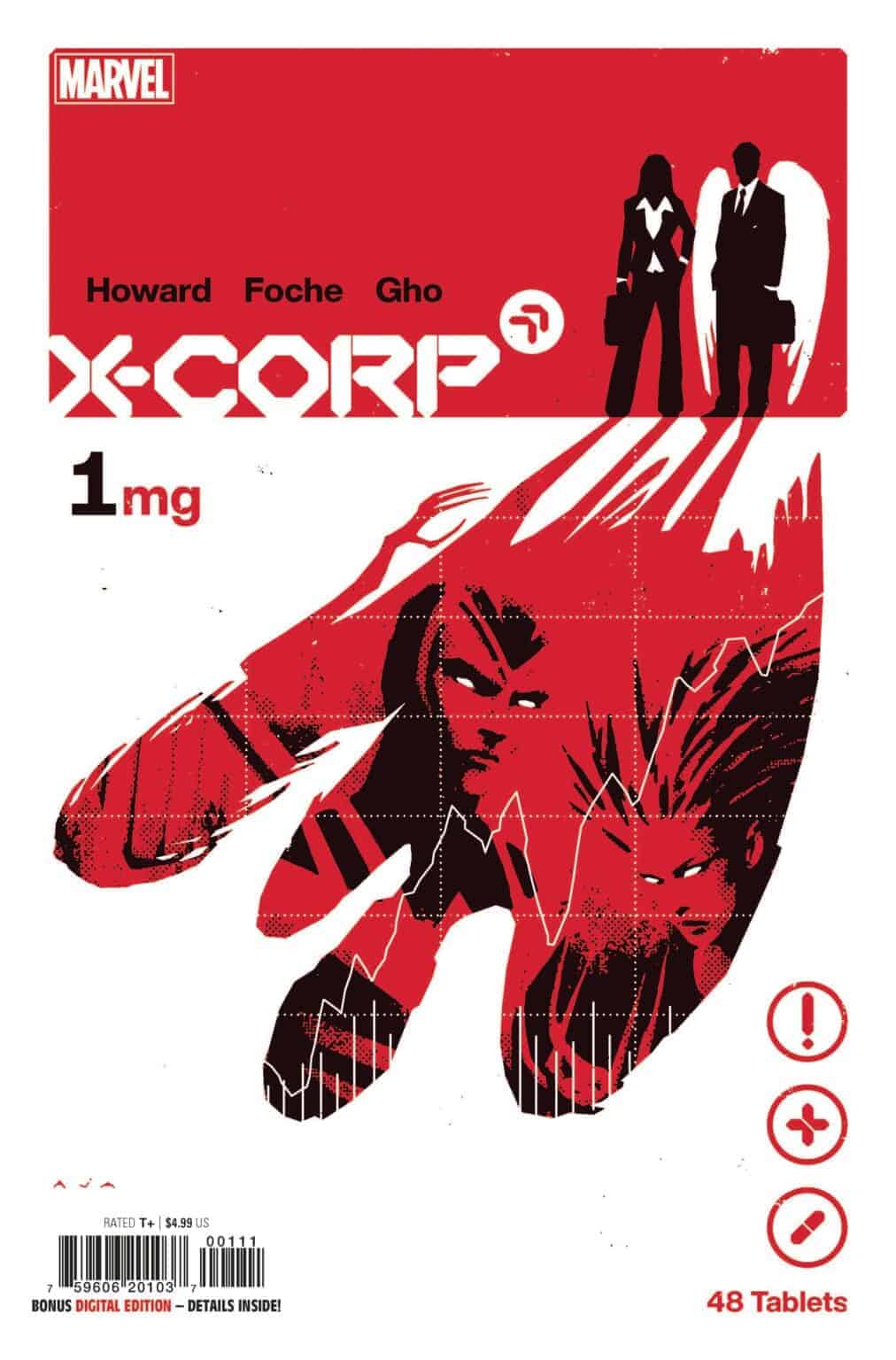 KRAKOA IS FOR CLOSERS!

The deals have been made. Mutantkind is safe on Krakoa.  As the Reign of X continues, what are the wants of the mutants who have everything? Leading the charge is X-CORPORATION, headed by CXOs Monet St. Croix and Warren Worthington, a duo as cutthroat and ruthless in the boardroom as they are on a battlefield. But X-Corp needs more than just its figureheads. As Monet sets out to staff their team with some of the brightest and most deviant minds in mutantkind, Warren finds himself in a tense meeting with one of Krakoa's first allies who wants to know the truth: on Angel's wings, will X-Corp crash or soar?

Krokoa has expanded into the waters of international business, one saturated with immorality, ruthless intentions and a penchant for manipulating wealth for personal gains. So what could the rise of X-Corporation mean for mutants everywhere? That’s actually quite simple. It means surging stocks and an even greater position of global influence that magnifies the presence of Krakoa and what it offers for all inhabitants of Earth.

To put it simply, X-Corp is an expansion of mutant ideals and practices, in all their benevolence as well as merciless tendencies, and leading that expansion are two uniquely suited mutants Warren Worthington III aka Angel and Monet St. Croix, A.K.A. Penance. 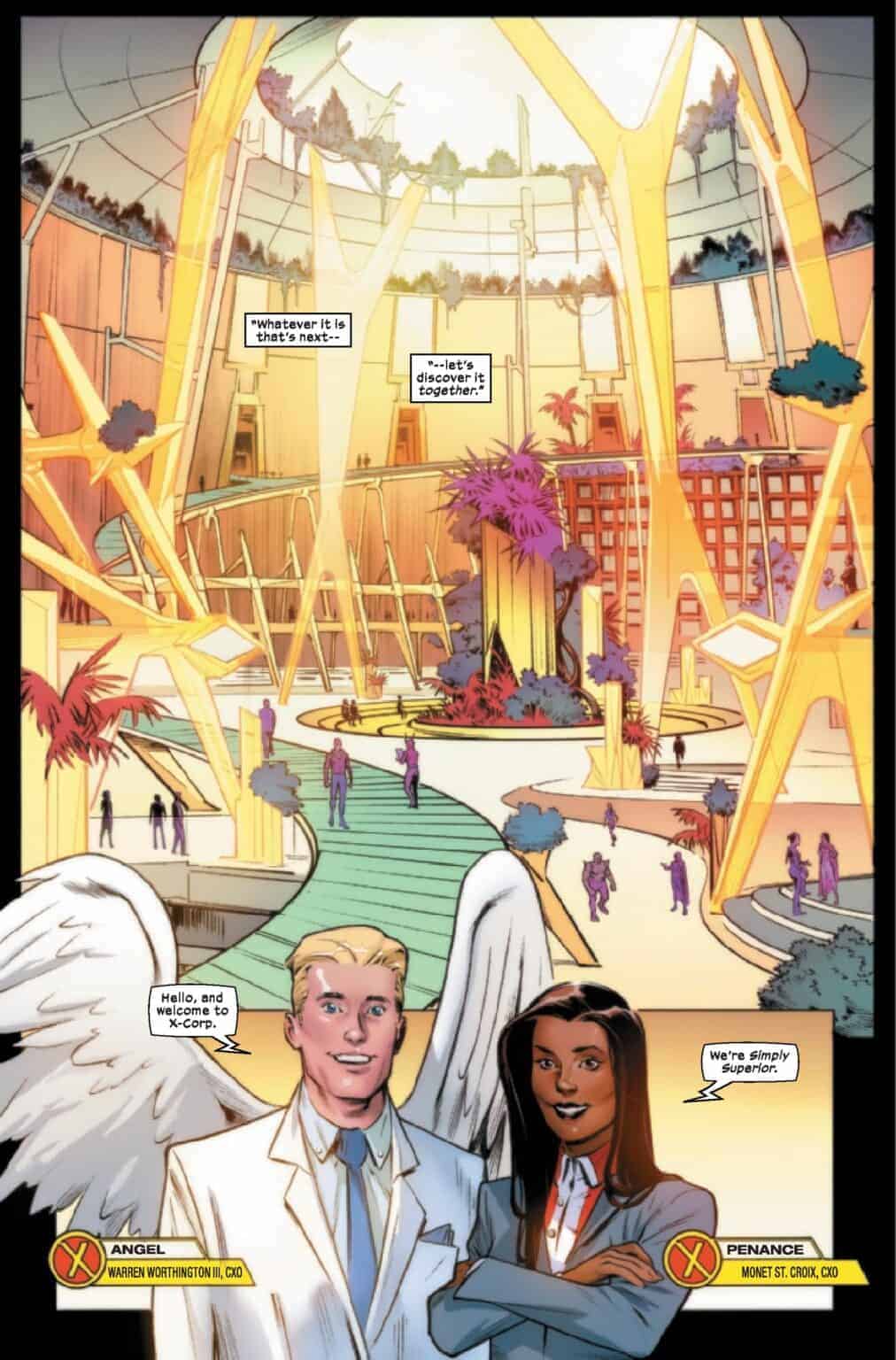 The premise of X-Corp alone may not be the most excitable for some readers as exploring the ins and outs of business generally isn’t considered the most thrilling of pursuits, but for me, it was an exercise in astounding long-form storytelling. This story isn’t happening in a vacuum, it’s intrinsically tied to the rise of Krakoa, its interests and the contrasting forces humanity opposes them with. X-Corp is a multifaceted exploration of not just life on Krakoa and this intriguing new status quo but also the potentials it offers in a global market. The impacts of the Krakoan flowers have created a demand that has been a fundamental element of the Marauders series spearheaded by Kitty, but that truly is just the beginning and this series feels poised to delve deep into those implications.

X-Corp may not be as complicated as some international trade deals, but it taps into the chaotic and unpredictable nature of business in such a wonderfully rewarding way. From PR teams to marketing initiatives, rollout expectations and stock hedging, boardroom rosters and so much more all within the context of the nation of Krakoa upending business as usual around the world. It’s a story that is centered on a notion of cost/benefit analysis, driving even the superheroics that are meant to position X-Corp at the forefront of the business world. And at the core of this intense scrutiny surrounding the cost/benefits of the corporation are two kindred mutants who contrast each other in the best of ways in Angel and Penance.

The dynamics between Angel and Penance form the heart of X-Corp #1. It’s their differing approach to negotiations and decision making, their banter and their goals for the corporation that push the first issue into such memorable territory. I think it’s safe to say that these two leads are absolute stars and represent the best of what the series has to offer. It’s also what helps to make this story accessible for those who may not be following the entire X-lineup of books. Angel and Penance don’t have a significant history as it pertains to this venture and that lays the groundwork for anyone who wants to jump into the series. Because this is a spoiler-free review I will avoid discussing their tangible means to operating and I’ll even save the surprise of other mutants that make appearances, but I will say the potential for the team behind X-Corp is limitless and almost has me giddy with anticipation for what it could mean moving forward.

That’s ultimately the most important success of X-Corp #1 as well. It does everything right in pulling readers in, making them care about the precedent of this corporation’s existence, its leadership and what it could mean for not just these characters that are so easy to get behind but also for the greater goals of Krakoa. It’s difficult to imagine this series not playing a crucial role in future developments as it relates to mutant’s place in the world and humanity’s expectations of them and that prospect alone will have me coming back for each new issue.

Hopefully Howard will be delving into some of the more nuanced circumstances that arise with such rapid business expansion in the global market and play off of the real-world consequences that can happen, portraying it through the lens of this new era for mutants in Krakoa. The first issue does great in setting up this potential and defining the premise with something important to offer in the larger picture but how the team follows up on the first issue could be a “make it or break it” type of situation. All the pieces are there for something great though.

While this isn’t a fast paced action-packed comic full of good guys punching bad guys, there are still quite a few opportunities for the artwork to shine and Foche with Gho’s colors do their best with those opportunities. Some of the settings are beautiful and despite very publicly fumbling Monet’s coloring, the artwork does feel established in the Krakoa era and its easy to enjoy. Cowles does some solid work with the lettering but Howard’s tendency to get a bit wordy does come into play as some pages are filled with exposition that isn’t always relevant. This creates pacing issues that, in the context of a business driven story, could be detrimental for some readers. For me, it wasn’t too overbearing but it was noticeable.

X-Corp #1 is a comic that might not do enough to pull some readers in especially compared to the full lineup of X-books currently happening and the overwhelming quality they all have. It’s a niche book with ideas and themes that in my opinion will inherently not appeal to everyone, but it checked all the right boxes for me. It delivered everything I was hoping for going into the first issue and promises the premise is just the beginning. There is potential for a meaningful examination of business behaviors, ethics and the dangers they impose despite such thrilling advancements and the creative team has a strong first issue to capitalize on as we move forward.

Let’s just hope they can maintain the momentum!

X-Corp #1 delivers a visually enjoyable story that is packed full of potential for a meaningful examination of business practices and ethics, all while exploring the precedent of the corporation's existence as well as the mutant's expanding global influence in this exciting new era.