X-Corp #2: How Foolish We Were 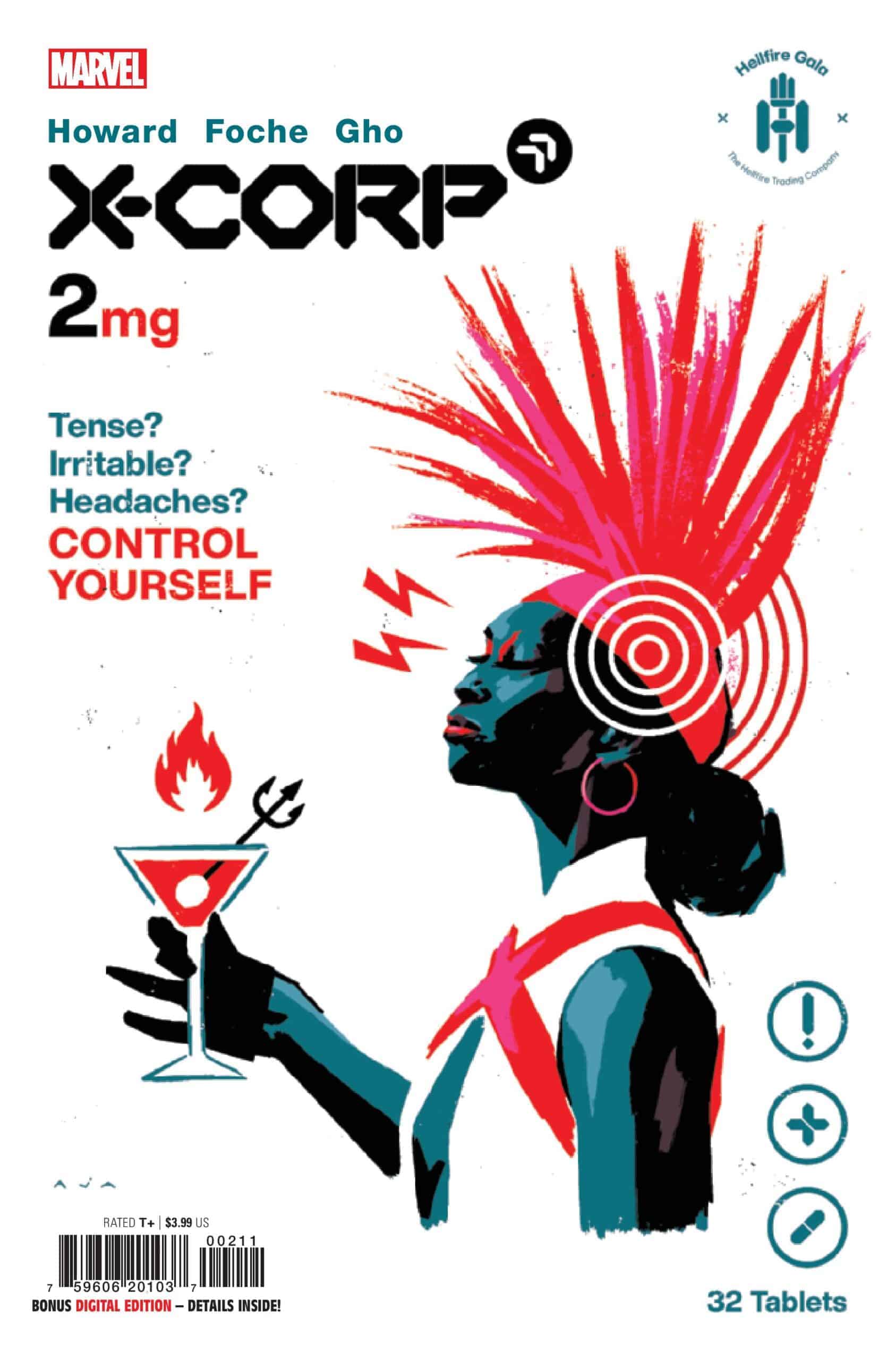 After X-CORP's shocking debut, they've got fences to mend, hands to shake and most importantly - a board to staff. With Dr. Jamie Madrox's top-class dupes staffing the HELLFIRE GALA, CXOs Monet and Angel must stalk the dance floor and hope they don't get preyed on themselves.

A shark in the water? More like a freaking nazi!

Luckily, Howard and company don’t play around too long with the likes of them and the beatdown ensues with X-Corp #2, an issue that might not win over any new readers on the fence after issue #1, but is a strong character-driven continuation nonetheless. 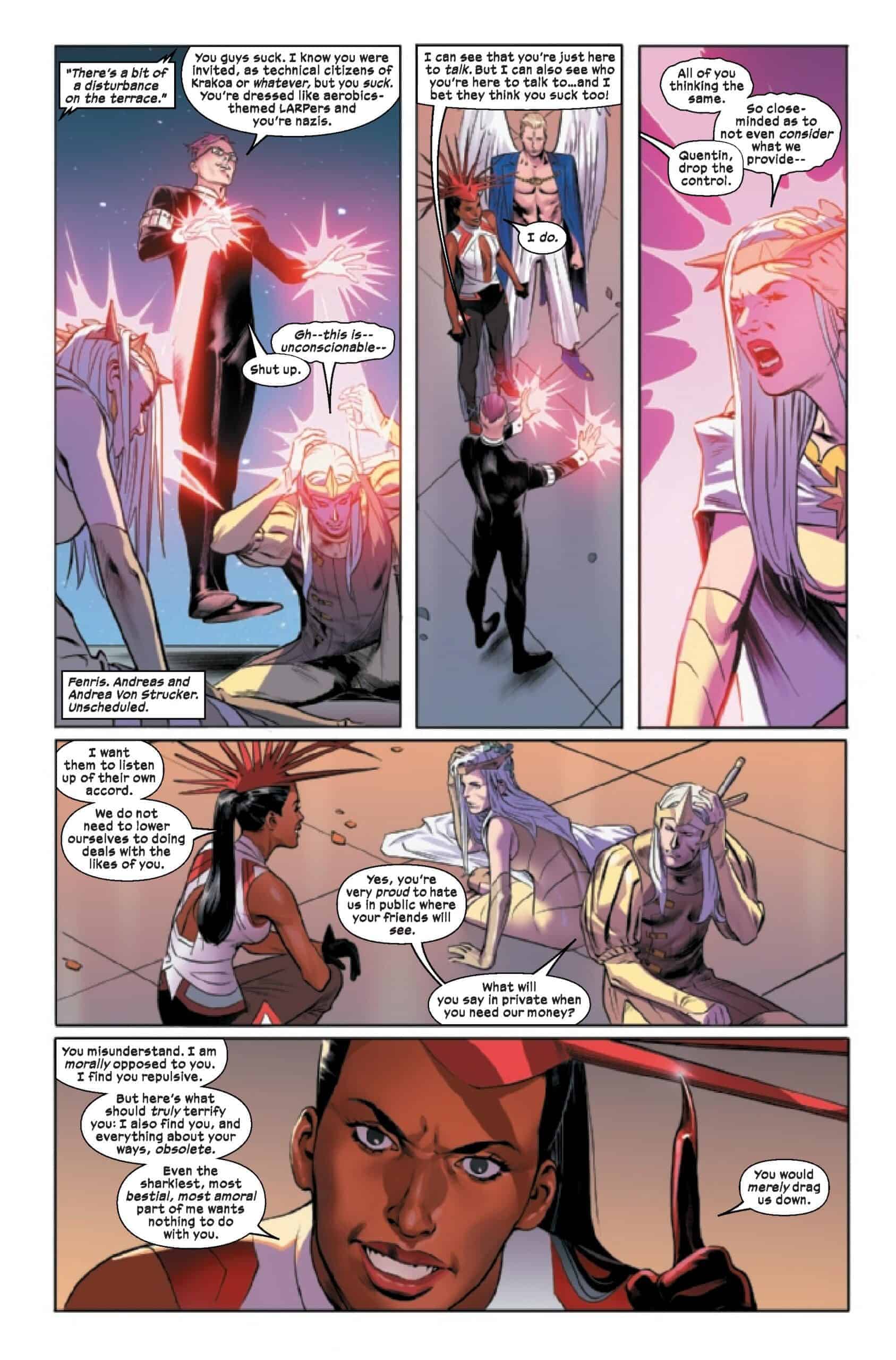 The first issue of X-Corp revealed the first steps of mutantkind entering the global marketplace to reign in the business world led by Monet St. Croix and Warren Worthington III, but it turns out international scandals, examinations of moral practices and expansion of boardrooms didn’t make for the most widely accepted of first issues. While it checked all the right boxes for what I was looking for in the series, it is certainly understandable for fans engaged in the much larger initiative of the Krakoa era if they weren’t quite into it. X-Corp isn’t the most action-packed or influential on the grand narrative, but it’s flashy thanks to Alberto Foche and Sunny Gho’s strong artistic direction and carries substance with Tini Howard’s willingness to explore character dynamics centered on a new business strategy for mutants and what it means at such a revelatory time.

Of course, just as the last issue wasn’t happening in a vacuum for mutants, forcing them to deal with the intrusion of crooked human affairs, X-Corp #2 also isn’t happening in a vacuum. If you’ve been living under a rock lately or maybe just avoiding the internet, you might not know about the Hellfire Gala that is currently taking place in the X-Men lineup of comics. With the party just about in full gear for X-Corp #2, we find Monet and Warren juggling more on their plate by having to build this new corporation from the ground up while also attending the most spectacular Gala in recent memory. No big deal, right?

As if foregoing most party affairs in favor of interviewing potential employees or board members wasn’t difficult enough, the bulk of this issue explores not the impact we might find from humans, but of other mutants. Saboteurs are all over in this world and just as they found out the outside world won’t look too kindly on the X-Corp’s arrival in last issue, the new company learns that even mutants will be looking to exploit their endeavors here with the involvement of the Nazi bastard Von Struckers (a.k.a. Fenris). A true wrench in the plans, but nevertheless, a real eye opener.

If there is anything we’ve learned in the first two issues of X-Corp it’s that the company and its interests will have to be safeguarded. There are too many threats, both outside and in, that pose too much danger to their operations. This is where the uniqueness of the dynamics between Monet and Warren find extra significance as well, because it’s clear the company will need the tandem of Warren’s smooth talking and Monet’s more straightforward approach more than ever. If the creative team is smart, they will rely more heavily on the interactions between these two moving forward because once again in this latest issue, they remain the heart of X-Corp.

For the fans who wanted a tighter pacing, or even a more fast-paced narrative, this issue might be enough to pull you back in. But if the concept and purpose of X-Corp hasn’t hooked you, this also isn’t likely to be an issue that changes your mind. Howard’s plotting is intricate, but not overly complicated, and it plays to the strengths of the characters in this issue even more than the first. Ultimately, X-Corp isn’t likely to be a series for everyone, but it’s still holding my interest for now and holds plenty of potential to do great things with a more established premise.

X-Corp #2 tightens the pacing and narrows the focus a bit thanks in part to the Hellfire Gala, maintaining the intriguing potential of the series, but might not be enough to hook uncertain readers.

X-Corp #2: How Foolish We Were