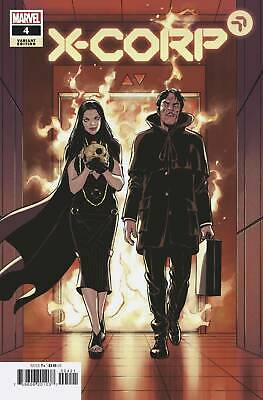 X-Corp faces a potential failure when their internet launch doesn't go quite as planned. Can Mastermind save the day, or will the new mutant corporation fail before they've really begun?

I was dubious about this series because I’m not exactly enamored with the way that Tini Howard has handled Excalibur, but luckily this book has its fair share of high points to counteract the occasional chasm in the story. The plot of this issue was a little bit convoluted, and the basic premise still doesn’t really make sense (what, exactly, are the stakes here? What will happen if they fail?) but some of the characters crackled with genuine chemistry and it was interesting to observe the machinations of the mutants as they all pursue their own individual goals.

I have to say that I loved watching Monet teaming up with Selene. There’s a sense of recognition there, an aura of mutual respect, and I would happily read a buddy book featuring the two of them on a road trip. I also enjoyed Mastermind exhibiting his confidence and skill while everyone else scrambled to make up the deficit. Tini Howard has a knack for writing morally dubious characters and the two former Hellfire Club members are easily the highlight of the series.

The problems in this series are impossible not to see. Krakoa is already the most powerful country on earth. Now they’re providing the vast majority of the world’s internet and they have an incredibly powerful technopath on the team — one who transferred the money from all of the billionaires in India to the poorest members of the population. There’s nothing that a single media company could do to them. Not even Noblesse Pharmaceuticals can touch them. Not if Krakoa can control what goes online and what gains traction. The drug that nullifies powers (or kills mutants) can’t compete with resurrection. It’s difficult to really get invested in the characters when there are no stakes greater than mere humiliation.

The fight scene between Warren and Monet seemed forced and unearned. Neither character particularly needed to have that mid-fight conversation. It added nothing to the development of the story, beyond making the characters seem immature and shortsighted. I know that the main theme of this book is duality and acceptance of oneself, but it’s not being handled particularly well. We need less telling and more showing. As it is, we are informed that the characters are having these struggles, but this is the narrative equivalent of being battered over the head with a bottle. That’s a sign of a writer who doesn’t have very much respect for their audience.

And that’s unnecessary because Howard can plot a sequence. The Oceans Eleven-like montage of Monet and Selene buying out and intimidating the Noblesse stockholders was fantastic. It was sly, cinematic and occasionally very funny. More of that, please.

The art was clear, but not spectacular. It fit the story better this issue than last. Warren’s Queensbury Rules boxing stance was hilarious, but I don’t know if that was intentional. If so, bravo. Sunny Gho’s bright, cheerful colors really affected the tone of the story, in mostly positive ways.

Taken as a whole, this issue was an improvement over what has come before.

This issue is a candy-colored glimpse of corporate espionage, delivered mutant-style.