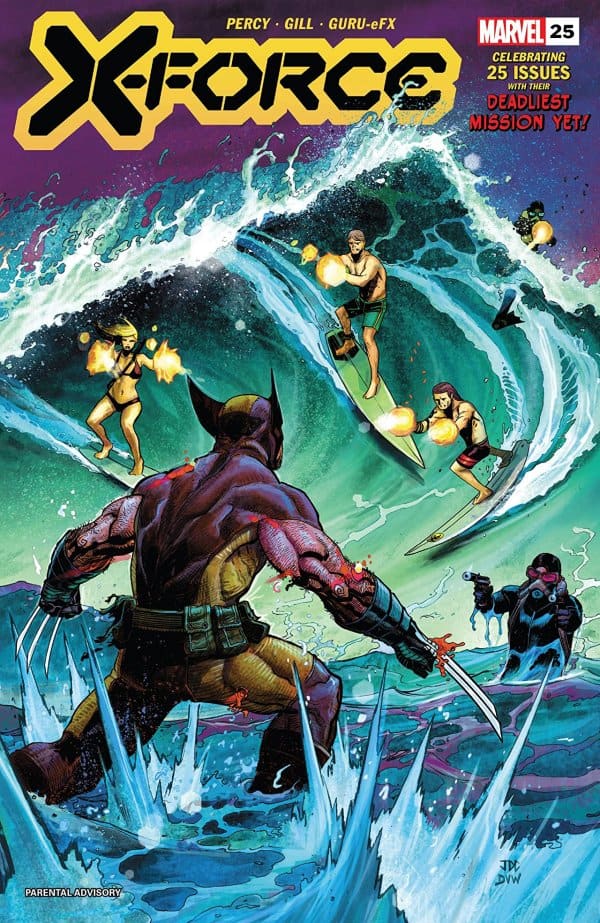 Logan has been through a lot in his life. Sometimes, he just wants to relax. Usually, that means meditating, getting into bar brawls, hunting...

But today, it means surfing the most brutal rip Krakoa has to offer. 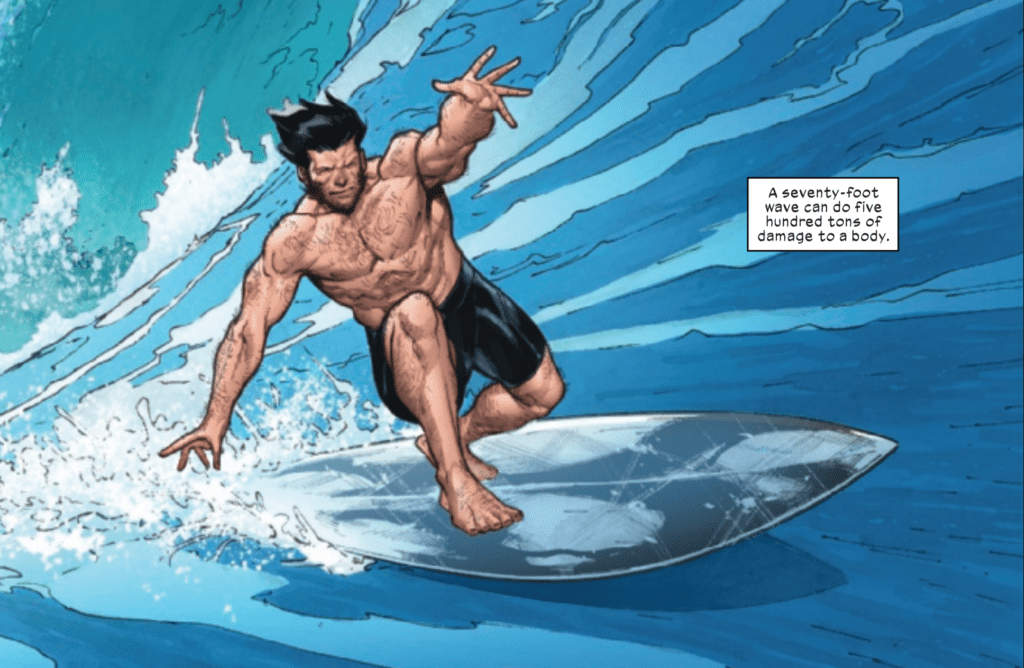 There couldn't possibly be any negative repercussions from Logan's new hobby, right?

X-Force #25 is an absolutely refreshing change of pace from this title’s usual doom-and-gloom black ops adventures, where the line between right and wrong isn’t just blurred, it’s non-existent. X-Force has always been the beautifully redheaded stepchild of the Krakoa era X-lineup, eager to prove that just below the shiny surface of Krakoa’s paradise lurks a heart of darkness. Wolverine, Forge, Domino, Quintin Quire, Sage, and most especially Beast will do whatever is necessary to protect this new mutant nation.

So, yeah, after twenty-five issues of gut-wrenching moral quandaries that stain the soul, let’s go surfing.

Logan has earned it.

Writer Benjamin Percy clearly understands Wolverine inside and out (his eponymous solo title also proves that month-in and -out), well enough that he can throw a Wolverine-is-surfing story into the mix and it doesn’t feel at all out of character. There’s a sheer joy to this issue, as Logan lets his hair down and surfs a rip that could very literally kill anybody else in a heartbeat. He also meets cool new galpal/surfing aficionado Pike, with whom he makes an instant connection.

Which means, naturally, there’s more to her than meets the eye. No spoilers, sorry – just buy the comic, okay?

The other half of the narrative focuses on Quintin Quire and Stepford Cuckoo Phoebe, and a turning point in their burgeoning relationship. This particular subplot feels a little off to me as a longtime reader; the recent personality changes in Quire don’t feel earned and frankly serve to water him down as an individual. Likewise, the peer-pressure exerted on Phoebe feels a bit more performatory than genuine. But I love both of these characters and trust Percy (he hasn’t steered either X-Force or Wolverine wrong yet).

New series artist Robert Gill hits the ground running with this issue, although he’s unfortunately outshined a bit by Guru-eFx’s sublime coloring. Percy’s script allows for some jaw-dropping surf scenes that are a colorist’s dream but perhaps don’t allow for a penciller to flex quite so much. None of this is Gill’s fault, and he’s clearly a competent talent with big things on the horizon, tapped as he’s been for a big-time gig like X-Force. Couple that with seasoned lettering pro Joe Caramagna, and you have one sharp-looking comic.

The looming question, of course, is this: how long will this tropical paradise last? Has X-Force truly earned a moment’s rest? The answer, of course, is not bloody likely. And in Percy’s hands, that’s just the way fans like it.

X-Force #25 is a pure joy to read, taking time out from the black ops de rigueur for some (kinda) laid-back surfing fun. Showing writer Benjamin Percy's range, there's no way to read this issue and not finish it with a smile on your face.